Another Thai tea unlike any I've ever tried!  I just posted about a novel Thai oolong my aunt bought in Chiang Mai, and she also picked up a unique black tea there, again supposedly of local "hill-tribe" origins.  The style is similar to a lot of Chinese black teas:  soft (no astringency), and fruity, not exactly my favorite style but a nice tea.  It was odd the packaging doesn't identify anything, but then for locally grown and processed tea that would make sense.


The appearance is a little unusual, not a standard form, with relatively large, dark oxidized leaves, but not as long and twisted as Chinese teas tend to be.  The flavor is familiar, sweet, heavy on fruit flavor, mostly in the range of peach / apricot, maybe even a touch of cocoa.  I've tried a number of different Chinese black teas that seemed similar, one of them being this Golden Monkey I reviewed (along with two other teas; this blog can be a bit random like that).  Note that it's clearly not the same type of tea, since that type is marked by using buds in combination with small leaves, and this isn't that. 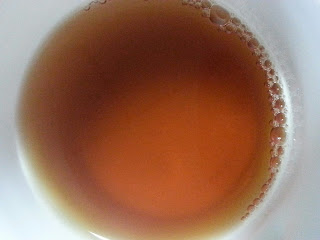 It's a bit difficult to get past that one strong primary taste element to say a lot more about it.  The sweetness carries over as an aftertaste (although "finish" sounds better), similar to how star anise works.  Beyond that the rest of the taste and feel is fine, nothing unpleasant.  There is a bit of earthiness as underlying taste, strange as it sounds a little like coffee.  The flavor is very "clean" and pleasant, so in spite of it not tasting much like toffee, cinnamon, leather, and wood I like it.


Ordinarily natural sweetness in a tea is a good thing, but to me some Chinese black teas can come across as a little too sweet, which is why this style isn't my favorite.  Of course this isn't really a Chinese tea; it's from Thailand.  I'll talk a bit further through what it might be.


Not sure if anyone else had the same impression related to my last blog post, about a Thai oolong and Malawai white tea, but I find that once one gets past the first few sentences of what a tea is like more questions than answers come up.  From that post:


-how was it possible that the Thai oolong leaves were so mixed in oxidation levels?

-what is the normal range of oxidation level for a peony / Bai Mu Dan style white tea related to the other types, green and oolong?

-was that even a typical peony?  It seemed a bit different than others I've tried, mostly in a good way, a bit better.  Of course the leaves were bigger (the original ones; the picture didn't really show that well), and the tea was all leaves, not small leaves and buds, and the final brewed liquid was on the red side, not matching the brewed liquid shown by the vendor.  But then maybe the tea appearance related to hot-storage-aging issues in Bangkok, which might not necessarily have all been negative changes, if some did occur.

-how does the processing step for rolling / bruising leaves affect the taste of the tea, versus a more simple processing for white tea?  Of course some of this question is answered just by tasting different teas, but it can be all but impossible to separate out all the factors that lead to aspects of a final product.


I could go on.  One question that comes to mind related to this review is about the cultivar type of the particular tea in question, and if that's the main factor that makes it taste like a number of different Chinese black teas I've tried.  Or is it more related to processing?  I asked an online tea-friend, and I'll get back to answers about that from him.

As background, I have tried local Thai tea made from one plant type into a number of different teas (Jin Xuan).  I've also tried Ruan Zhi made into both oolong tea (the normal product and processing), and as a green tea, but don't remember having it prepared as black tea.  Of course I've not verified the same exact leaves were processed as different types, so it doesn't work as that type of controlled experiment, just as a bit of input.

It's interesting how some the character of the tea stays the same while other aspects change.  Some of the basic flavor profile isn't different, even though the style does shift that a good bit, of course towards more vegetal for green tea, oxidized / earthy / "tastes like tea" for black tea.  It's also clear enough why the cultivar is well suited for oolong, or it could be instead that this is the processing type that is the most familiar or skillfully practiced here; hard to be sure.

Of course the tea isn't particularly sweet across the entire range of three different types from the same plant type (maybe just a little, not like a better Tie Kuan Yin can be), or at least the the countless examples I've had weren't, so that aspect didn't vary so much.  It made for a mild black tea, so one could assume plant type relates to astringency level, but then really growing conditions or processing could as easily be main factors as well.  I'm not exactly pinning this down, right?

I'm wondering if it's even possible for the black tea I tried to be Jin Xuan, and at a guess it's not, it's just too different, even giving variance related to processing.


I couldn't get far with saying anything about this tea, what it really is, so I'll say some random things, and point to research that might only vaguely relate.  Maybe it doesn't matter anyway; it's a rare local black tea I'll likely never see again, only to be appreciated cup by cup.  Or maybe that can be extended; possibly best to not over-think tea in general, to just enjoy it, be all Zen-like.


I'm curious if that one particular taste element (sweetness, and related aftertaste / finish) comes from the cultivar more, or from the particular processing, or if I've made a mistake in assuming one of these needs to be the clear primary cause.


It doesn't solve anything but here is an interesting reference on how black tea is made, written by a Chinese tea vendor, TeaVivre.  Their description of their Golden Monkey tea doesn't clarify if the taste I'm remembering relates to that type in general, or more to that version.  But then I already said appearance alone separates the types, and no amount of internet page researching is really going to shed that much light on cultivar versus processing causality.  This Teapedia general reference on black tea has a lot of interesting information in it, but it helps a lot to be familiar with these tea types first to know what it is saying (what the regions are, what the teas are like), which kind of defeats some of the point.


Tea expert means a range of different things these days.  It would be great to meet an old Chinese sage-like ancient-heritage master, but in place of that my online contact / tea friend Michael Coffey can say interesting things about tea off the top of his head (see teageek.net), like why that tea might be so sweet:


Sweetness typically comes from amino acids, but not always.  Amino acids are influenced by a number of factors--for example, the cultivar might naturally produce more than other cultivars, or environmental conditions might be just right for the plant to produce more than usual, or (in my opinion possibly the most likely) a combination--the ideal environmental conditions for that cultivar to produce more.  And that's before we get into processing.


Simple, right; the answer is usually that the answer isn't simple.  As far as what this cultivar might be, he confirmed both general plant types are grown here (see more about var. Assamica research in this post, and semi-wild tea plants, with most other Thailand-related posts already about Taiwan-originated var. Sinensis types).


So really as one tries lots of different teas from different places made in different ways the patterns that cause different characteristics would emerge, much as it all ever seems to become clear.  The most important thing is to love the experience along the way, even though I can also enjoy over-thinking things.