Merry Christmas! And about a coconut flavored tea, while I'm at it

Merry Christmas!  I never write holiday theme blog posts, and I never drink flavored teas (except for a little jasmine, osmanthus, or Earl Grey, and then there's masala chai, but you know what I mean).  Monsoon teas, a tea shop in Chiang Mai, Thailand, sent me a sample of a coconut green tea so it seemed a good time to break form.  I wrote about another plain green tea version of theirs here, and mentioned they seem to specialize in unusual Thai teas, likely more closely related to native plant types, more traditional locally sourced tea, etc.


First, about Christmas in Bangkok.  I worked, so that part is different.  It was less of a loss because my son is at school too, so we did presents opening early and will get back to what it's supposed to be about later, or just skip some of that.  It doesn't seem like Christmas when it's 80+ degrees out (nearly 30; I've switched this to F given the context), and it can be hard to keep up the same level of traditional celebration here. 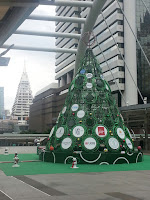 The part about being in a Buddhist country changes things too.  They put trees up, and decorate the malls, but otherwise they don't know what to make of Christmas.  I once went to a work New Year's Eve party on Christmas day and no one acknowledged it was that--kind of strange.


How does this relate to tea?  Maybe it never will completely tie back in, but I've meant to say something about the trade-offs of living in a different country at some point, outside the US.  One positive aspect is that I'm in a tea producing country, and a half dozen others are a bus or train ride away, although we usually fly places.  We travel a lot, and it's relatively inexpensive, more so than going to the next state over back in the states.

The list of problems and adjustments related to living in a foreign country is so long it would sound like whining if I even started in.  Giving up the normal celebration of every single holiday, and not offering that same form of my own past experience to my kids, is just the start.  So trade-offs, along with other positive aspects; but then, one would expect that.  Of course there's much more I could say but I'll switch this back over to tea-blog mode instead.

About the earlier Monsoon teas I tried, it had occurred to me that they would work well for blending related to how the earthiness came across, even though they were much better than the average Thai teas I've tried here.  Part of considering that was a review of a traditional Thai iced tea post, where it came to light that such teas were originally based on somewhat native Assamica type plants.  Modern versions are artificially flavored, powdered tea, a bit nasty, but the original based on real tea, crushed tamarind seeds, and orange blossoms sounded interesting, and the version I actually tried was ok (not really sure what was in that though). 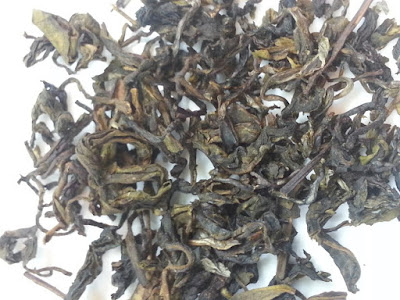 The coconut flavored tea was the first flavored tea I've drank this year, aside from the other types I mentioned (jasmine, etc.).  It is a loose tea, nothing like tea bags, so I was wondering if it could really work.  The tea tasted almost exactly like a Mounds bar, just without cocoa / chocolate, which did work for me.  The flavors were very clean and natural, with a little softer green tea flavor, but as much toasted coconut taste as that.  One would have to at least consider pairing the tea with chocolate, then it would be like actually eating the Mounds bar, but with half the experience in a hot beverage form.

I talked to Kenneth, the shop owner, about the tea, curious about what the flavor was.  He didn't get into processing details but it is from an essential oil made from toasted coconut, something they make or have made for them (or so it seemed).  I was wondering how it could taste as real as it does, without some strange aftertaste or aspect, and that's it; it is real, just not as if there is actually shaved coconut in with the leaves.  Getting the balance right would be the trick to it, but the coconut taste level was about where it should be, and somehow didn't vary much across infusions, so all good there.

It's easy to stop there and not drift into how a tea matches or doesn't match my personal preference.  One might even say it's a tea blogger convention to do that when it does overlap well, but not when it doesn't, to keep things positive.  I won't be switching over to flavored teas anytime soon but this is easily the best flavored tea I've ever tried.  I suppose that's not saying much, since setting aside those few exceptions the others were tea bags, and I've definitely not drank even one such tea this year, and few enough across my lifetime.  It's not negative aspects of this tea that would keep me from drinking more of it, and others like it, but the vast expanse of other new teas to try, each with different character based just on plain loose tea.

I had a nice conversation with Kenneth about other aspects of the local industry, about tea production and drinking, sustainability.  I'd think most people that are more into tea would have given all this some thought, and it's nice to hear about real steps being taken on the other side, a producer picking teas to sell based on that.  On the other side of that, it's sort of a leap of faith to believe anything any vendor says about it.


I trust what he was saying, but it really helps that it won't matter so much if it wasn't accurate.  If that tea came from a recently strip-cut rain forest farm--which it didn't--it would be sad, but I'd never learn of that truth.  If that taste was from some chemical mix--which it isn't--it wouldn't be as healthy, and it would be unlikely for it to taste so natural, but my health wouldn't suffer, probably even if I drank a few hundred grams of it a year.  A bit cynical?  I suppose.


Even for the most transparent vendors, people that offer lots more details--and business names do come to mind--it's hard to really know.  Some vendors one step up the sourcing chain could dig lots deeper into growing conditions than a consumer looking at a web page, and they might feel convinced, justifiably, but the whole landscape would need to shift before it would seem easier to really separate at the lower level, for the person buying the tea.  So what do we do?  Some enthusiasts and vendors would say to vote with your purchasing dollars (or baht, or rupiah), but some of the time the grounds for doing that could just be marketing spin, so it's right back to the issue of separating fact from fiction.  I'll keep it in mind, and write more about it as there is more to say.