Odd I'd go right back to Thai tea reviews after picking up so many from Indonesia, but I'll mention another more local tea I just tried first.  It'll help me get back into the swing of drinking green tea since it's been awhile.

This Monsoon Lana green tea was an interesting version of a green tea.  There's a bit about Monsoon on a website here (mostly contact information), and more in a Facebook page here, but since it's more a physical shop than an online store not so much for product details in either place.  Of course they probably would sell you whatever teas they have without you actually going to Chiang Mai, I'd expect.  I might also mention that they provided this sample to me for no cost, which is much appreciated.

I'm probably skipping some cool back-story, since per discussion with the owner the black tea versions were from relatively native plant types.  I did a review post of one such nice Monsoon black tea here, and more write up about regional cultivars here, including some background on those "semi-wild" local var. Assamica plant types, so it's all there, except the tie-in to what this tea is.  But really, what's in a name, or DNA / RNA; it's all about what's in the cup.

To be honest green tea is not really my favorite general type.  I like darker roasted oolongs best, then black teas next, maybe more unusual types like Oriental Beauty or Bai Mu Dan / White Peony after that (both of which aren't so unusual to some people, but you might know what I mean, and if not you aren't missing much).  But I get around to drinking a lot of different kinds of teas, from lots of different places, and interesting versions like this one are easier to appreciate. 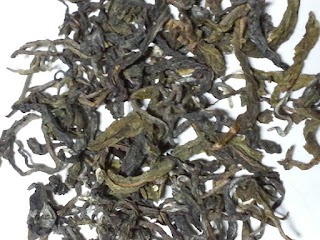 The tea appearance was unusual; a bit dark as some green teas go, with large, twisted leaves, mostly whole, some broken a bit.  The smell was unique too; a warm, earthy, sweet smell, with lots of fruit, mineral and earth elements combining, with raisin or berry as the most interesting sweeter components, and a primary scent along the lines of toasted sesame.  Dried seaweed products can smell a lot like that, not as much like seaweed as you'd expect.  I had a really interesting and somewhat related dried river plant snack from Laos once, but I digress.


The initial infusion taste didn't match the smell so closely, with more pronounced mineral elements coming out, and a bit of grassiness, even earthiness, with that part related to the sesame.  The tea didn't seem exactly like a Vietnamese green tea but some of these aspects reminded me of those, flavor components that match the way some types of rocks smell, maybe slate or limestone.  These were combined together with earthier aspects and a limited degree of sweetness, in a way such that it all mixed together. 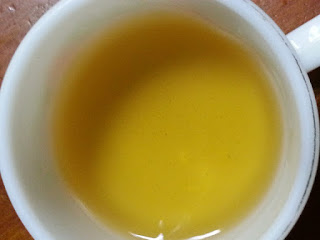 The general effect wasn't bad, just a bit muddled, and not as pleasant as the smell had promised.  The tea feel wasn't hindered by too much astringency as some green teas can be, but brewing with slightly cooler water may have offset the potential for that.  I couldn't help but consider how someone that really loved green tea would react to this one, versus how much I liked it.  The tea was fine, just not a favorite style, and the interesting combination of aspects wasn't completely winning me over, although the tea was nice.


It improved in later infusions.  To clarify, I was brewing it Western-style, but using a higher proportion of tea to water versus how package or general instructions for Western-style brewing usually go, with slightly shorter infusion times.  This really relates to a brewing methodology I prefer for some types, not some general standard approach, not intended as an improvement of that which would apply broadly to others.  Some tea types would brew three infusions at good strength using such parameters, like a black tea; others types would tend to go further, brew more times and more tea, as lighter oolongs tend to.  This tea really hung in there; a good sign for tea quality.


The flavor mix seemed to clean up a bit in subsequent infusions and move from pronounced mineral flavors to softer earthier tones, with more of the initially promised sweeter fruit flavors coming out.  The vegetal, grassy background remained, maybe diminishing a bit along the way as well.

The complexity, the number of different flavor components, made separating these as a list of individual flavors a bit tricky.  Some tea reviewers have no problems with that; they can easily list out 8 or 9 different flavor components, regardless of whether these are standard tastes one would recognize from foods (eg. spinach) or if they are not related to that at all (eg. flower types, rocks, types of wood, toasted peat moss, etc.).  In my own case it helps to drink a tea more than once to sort it out; obvious distinctions stand out right away, but finer ones are easier to pick up with a bit more exposure.  I tried this twice and it all was a bit clearer the second go.

So in the end after the first infusion more elements of berry or raisin came through, just very faint, along with a vegetal profile normal for green teas, just not to the extent that it clearly tasted grassy (ok, maybe a little; one subtle background taste element was pretty much "cut-lawn" too, grassy in a literal sense), and not so much like spinach or peppers, etc.  I liked the tea but never moved completely past the "do I like this?" reaction, if that makes sense, given the tea isn't a general style that I prefer.  Green teas in general don't usually exhibit the rich, full feel that other types can, and the finish can be a bit limited, but it's really more about a flavor profile, for me.  Those particular aspects didn't stand out as flaws in this case, it wasn't "thin," but also not as strengths.

I think someone that loves green teas would love it, especially if that potential for a slightly rough astringency aspect is something they didn't love, because this was a soft tea compared to others with that flavor range (much as a tea this unique has a common flavor range; I mean in general).  Being on the unique side tends to help, for me.


In Vietnam, per my understanding, people tend to love the astringency that is natural to their green teas (usually prepared in a dark-green "fish-hook" leaf style), so much so that they brew with hot water without limiting infusion times, letting it go from a little structured and edgy all the way to bitter.  But then preference is a funny thing.


Comparing it to wine, it's as if one person likes the full feel and effect of astringency in a Cab-Merlot blend, and someone else likes a lot more edge, exhibited differently in an earthy and rough-edged French Cabernet compared to that in a brighter and sweeter but slightly sharp Chianti.  This tea might be more like a Northwestern American Pinot; it had some interesting things going on but all that wasn't really about astringency, there was just a little to give it some feel.  Of course good versions of that type of wine are awesome, quite a compliment it seems, but I'm having trouble thinking of a plainer example that still works for the astringency parallel.  The tea was nice, though; it will be interesting to see how a couple of Indonesian green teas compare.
Posted by John B at 11:13 PM