Another interesting Thai black tea, thanks to Monsoon teas for sending some samples (a tea shop in Chiang Mai).  They don't seem to be set up for online sales but do have a website and a Facebook page for contacts.  I've been drinking a lot of different Thai and Vietnamese black teas lately so it will be hard not to compare it to those, but maybe that's not such a bad thing.  Straight to it then. 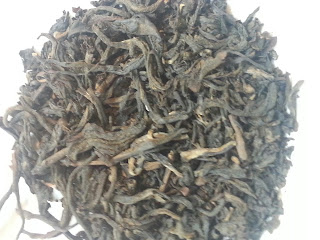 The dry tea smelled a lot like cocoa; not a bad start.  The leaves were a bit broken and dusty in appearance but beyond that black teas can tend to look a bit the same.  The leaves were dark and twisted, and relatively whole, a good sign.


In the first taste that cocoa scent translated into one of the most pronounced flavor elements.  Altogether it seemed a relatively smooth black tea, with some sweetness, and a decent balance of other flavors.  Beyond that in terms of taste the sweetness extended to other flavors that mixed a bit with the others, a bit of dark cherry, a hint of pine wood, even a trace of smoke.  There was not much in the way of astringency, beyond the body even softer black teas possess. 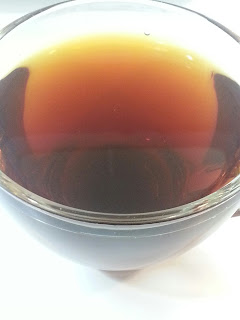 It reminded me a lot of the Wild Boar black tea from Vietnam, from Hatvala, so much so it was hard to not taste it just as a comparison to that tea.  So how did it stack up?  The flavor profile was similar, rich and sweet, somewhat complex, with a good balance for a black tea, right in the range of what I prefer.  Somehow the flavors were a bit less clear, with a slight mustiness to them, that the Vietnamese tea didn't possess, and to me that tipped the balance in favor of that Wild Boar version.


I talked to Kenneth, the owner of Monsoon teas, about the unusual nature of the tea, related to the flavor profile, and he said:


All the teas that I sent to you are from forest plantations that comes from wild tea seeds. That's why the flavors are different from usual....The musty flavor comes from the Camelia Assamica bush.


Even more interesting that it reminded me of that locally sourced Vietnamese tea, which was also not a type you might often run across.  Going back to that reference--which I had already added a link to--that tea was also Camellia Sinensis var. Assamica, also described as from "wild" tea plant sources.


But for once I'm not going back into that, how wild or not wild some other general hearsay indicated they might be, most of which relates to teas in China anyway.  If that subject is of interest there was a good reference table of plant types in a recent post about a Jin Xuan (a tea from Taiwan, but that tangent drifted into talking a little about Thai teas too).  And there was more about it in a post about traditional versions of Thai iced tea, that type that's sold as bright orange powdered tea now, but it had been a "real" blend before it changed into that, a local black tea mixed with orange blossom and crushed tamarind seeds, per some accounts.


Ordinarily I try to be really positive about teas I review, since that seems more interesting to a reader, to hear about the strengths of teas I like.  I want to be clear that this is a very nice example of a black tea.  It would be easy for someone to drink tea in Thailand for a long time and not even know options like this were available, soft and sweet, interesting and complex versions.  This tea is a good bit better than anything I've ever tried in a tea bag tea, so really on a completely different level than any of those.  It's not that really incredible tea couldn't be held captive in one of those pyramid-style tea bags; I just don't end up drinking tea from tea bags, and I typically remember why I don't when I try.


Related to being negative, it also seems problematic to identify attributes that don't match my preference as flaws, when someone else might love those same aspects in a tea.  One way around this is to only review teas that I love.  Another might be to clarify when I think an attribute really is a flaw, and when it's just about what I like.  All those positive aspects I mentioned weren't flaws, of course, but a slight mustiness would hardly seem to match a potential preference.


Lately I've been considering how having more experience actually makes it harder for me to be positive.  A year ago I'd not tried that particular Vietnamese black tea yet, or a second that was roughly the same, or a lot of other Thai black teas I've been writing about, or a great example of one from Indonesia.  Or any black teas from Japan and Korea, which I have tried since, etc.  A year ago I'd have been amazed to discover this tea as a version from Thailand (although I had tried one pretty good black tea from here prior), and it's not really any worse a tea for me having tried other exceptional versions somewhat recently, as well as some that weren't quite as nice as this one.  I guess I'm saying it's good tea that sounds worse because I've said another that it reminded me of is better.


A tea friend mentioned once that there is a natural experience curve for tea bloggers, not a universal trend, but that some tend to write less and less, to have less things to investigate and comment, and then finally it makes sense to just stop talking about teas.  I related that to the general idea that many things tend to seem simple at first, then more complex, then simple again later, once you move past lots of details and can focus only on what's most important.

I might need to keep "chasing the dragon" related to trying better or newer teas, or else struggling to explain what I experience as positive instead of noting that each is a decent version of a tea, while turning a blind eye to awareness of others that are better.


Of course the new and different part does come naturally.  I have at least a dozen examples of teas that are quite new to me sitting at home that I still need to get around to trying, maybe a good bit more, who keeps track, and I'm off to visit a tea producing country right about now (Indonesia!).  I've only tried one black tea from Indonesia, from PT Harendong, as luck would have it not in such a different style than this one, so I'm looking forward to what might turn up.


As a test of all this, past experience and a taste for change affecting judgment, if anyone reading this has tried that black tea I'd like to hear their take; how was it?
Posted by John B at 6:57 PM