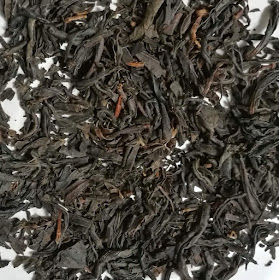 I've only ever tried one Japanese black tea so this will be interesting.  That version (reviewed here) was so-so, not really good, purchased in a mall shop in Tokyo on a trip there (with more about that trip here).  But then tea purchased in a mall shop of any type could be on the ordinary side, and it would seem normal for one to stock a moderate quality level version of an unconventional type.

The owner of Tea Mania, Peter, sent this.  We met when he was visiting here (Bangkok) awhile back and as it often goes stay in touch only now and again, but he was nice enough to share a number of different teas to try this year.  The sheng stood out to me; a few really nice commissioned versions.  Atypical for those types they were selling for around the same pricing as factory versions, even though the teas were much better.  I'm not so into Japanese green teas but that set also worked out as a chance to explore some.  I always thought eventually I'd circle back to that range (I drank mostly that at one point, back when getting into tea), and I'm not converted yet but I can see what people see in them.

I'll cite the Tea Mania introduction, including background and brewing recommendation (edited down just a little; there's more on that page):


Honyama (also known as Tamakawa) is considered by connoisseurs of Japanese teas as one of the top growing areas. In Honyama, where the Abe River springs, are ideal conditions for top quality tea. The nights are clear and cool and the morning misty. The narrow valleys also ensure natural shading of the tea fields. So it is not surprising that the tea leaves in this area are about one month later ready for harvest compared to tea from the low-lying areas near Shizuoka city.

...For more hand processed tea there just isn't enough time because Mr. Sato and his wife run the entire tea production by themselves and harvesters can't be used in the steep slopes of Honyama mountains .

Mr. Sato produces only single-variety teas... Blends are not per se considered as bad in Japan... but we think teas based on single cultivars are much more interesting. They allow to experience the differences of the individual cultivars. Blends, however, are in return more balanced.

I was actually going to use this advice for how to brew the tea, given the general category isn't familiar. I'll use a modified version of Western brewing, as described.


As far as price goes this tea costs less than one might expect, 12 CHF / 50 grams (about $12).  I think this is a rare case where buying more directly is resulting in end-customer savings, that equivalent tea would cost more.  Based on my own experience of walking around cities in Japan checking out shops as of 4 years ago it would be very difficult to find, especially if this version is as nice as it sounds.

Of course there isn't really an explicit quality level or even aspects range claim in that description, it's more that the source description implies that it's probably really good tea.  Tasting informs more about that; I'll see what I make of it.


This is a lot more like what I was looking for all those years ago.  It's clearly black tea, and definitely different than Chinese, Indian, or SE Asian versions.  The Japanese origin and relation to the green tea range from there definitely comes across.  Putting aspect description to that will be tricky, but that's part of the fun. 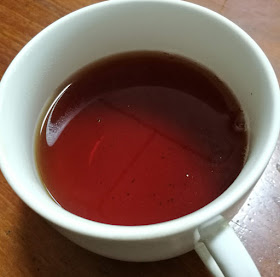 A more forward mineral-intensive layer is a bit malty.  It's a soft, distinctive, different form of malt, so not the range I'd use as a description for Assam (a lot edgier version), or for sweeter, milder complex teas, malt more like in malted milk balls or the milkshakes, which might stand out in a more-oxidized winter harvest oolong.  That malt range connects with a deeper underlying layer of minerals, in between sharp rusted metals and warm rich dark clay.  It's probably not clear but I mean all that as a good thing.

A fruit range reminds me of apple cider; not so much that it's tart (maybe a trace, but not so much), more because of that distinctive, warm earthy flavor found in a soft, fresh version of cider.  It's sad that a lot of people probably can't even relate to what I'm describing.  Not like something from a grocery store, unless the store is selling local, fresh versions.  Fresh-pressed real cider is worlds different, not like apple juice at all, and nothing like cider vinegar.  Every sip is sweet, warm, complex, and incredibly rich, so much so that you crave the next drink even before swallowing the last.

To me those three aspects summarize what's going on as well as a longer written description could.  Warm, smooth, sweet malt hits you first, with a lot of slightly oxidized apple tone filling in beyond that, supported by an earthier and "deeper" mineral layer.  It's all a lot cleaner and more pleasant than it might sound, put that way.  It's bright, distinctive, clean in effect, lively, and subtle in a way that's complex and refined.  It's definitely unfamiliar territory; I drink a good bit of black tea but nothing like this.  For matching my preferences it works.  It's easy for something so novel to not click, since it can't be what you expect, but I can relate to it.

It's hard to really specify how this overlaps with Japanese green teas, and this review never does make much of that, but somehow there is still a connection.  It would be easy to guess that maybe something like the mineral tones match but I'm not sure that's it.  I'm not noticing umami; I suppose it's conceivable that a limited amount of it is present but I'm just missing flagging that.

In the Japanese black tea version I had tried earlier a similar balance of flavors extended to be just a bit sour and musty instead, and it didn't work for me.  I can see how this could have went in that direction, with just bit of shift in some of what is there.  That faint trace of tartness does border on an expression of sourness.  For people very averse to tartness it would be way too much as it is, but I do like black teas with a touch of that aspect range, if it balances.  It gets to be way too much very quickly but as a mild supporting element that makes sense with more pronounced aspects this works for me.  It balances.  And it's very clean in effect; I think that's what threw off that other tea, that it wasn't.  Mustiness doesn't tend to match up with any tea style.  I guess if one had to pick a best-case for a musty tea to work some unusual hei cha version might pull it off. 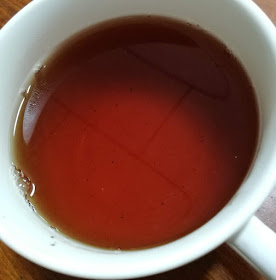 I went a little light on this round, using an infusion time of around 30 seconds, as recommended, but the proportion made that turn out light.  It's probably as well, and it was the intention, to try the tea on the lighter side.  For some more subtle teas you can miss a lot of the effect and how aspects should balance just by going with a normal infusion strength (with "normal" meaning different things to different people, and that optimum varying by type).  Brewing a tea on the slightly lighter side makes it easier to pick up aspects, even though that's counter-intuitive.  For a warm, rich, soft Chinese black tea sometimes I might like it better on the strong side anyway, but even in that case for reviewing the tea and getting the clearest impression a little lighter is better.

The flavor shifted a good bit towards cinnamon; that's different.  The aspect I was interpreting as malt seemed to.  The tartness (which was limited) essentially dropped out, leaving the warm effect to come across as stronger.  That one apple-cider tone is a bit more into cooked apple range in this round.  Even the underlying mineral isn't the same; that seems to still be present, but it's bridging more into that bark-spice range as well, now earthier, deeper, more mineral-inclined.  I like it better this round, but it already had been pleasant in the first.

I really should get some training in root and bark spices to put more specifics to those descriptions, but I'd only be clear to a really narrow audience who was familiar with that then anyway.  Or maybe no one; who explores unconventional spices, besides fusion-oriented trained professional chefs?

Some of the shifts I was describing could relate to dropping the infusion strength to slightly lighter, versus transition across infusions.  I'd guess mostly not, since those types of changes are typical.  This kind of level of detail of experiencing specific trace aspects seems to be exactly what Peter was talking about in that tea description, about experiencing single cultivar and narrow-source range tea versions differently than blends.  Mixing a few kinds of black tea (not national-origin differences, just local varied cultivars) can result in a nice balanced aspect profile, but it would also muddle those finer traces of subtle flavors, and make the experience of transitions across infusions less interesting.

I'll go slightly heavier on the next infusion (up around 45 seconds, or just above) to check how the tea works at a different infusion strength, and if being lighter seemed to cause the change. 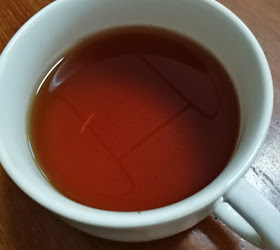 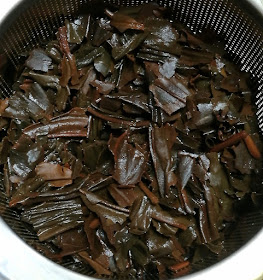 Earthier tones are drawing out again, maybe a little towards dark wood, with more underlying mineral.  Some of the bright, sweet, fruit range is fading.  This will go one more infusion in the same range, for sure, and probably another stretched a bit beyond that.  It really didn't increase the infusion strength by that much, really accounting for fading intensity instead.  It's at a good level anyway; drinking the tea stronger than average would only inform how that affects the balance, and it probably wouldn't be positive.

I could break that down to a finer level of detail, about what shifted to what, but it seems the general character of the tea wouldn't become clearer, and also wouldn't for describing the next infusion or two, filling in how it was altered by the tea fading.  It's still quite pleasant at this point.  Tea brewing a good number of positive infusions is generally a good sign for quality, but it would be easy to over-generalize related to that.  I did brew it again and it just seemed to be fading.  Some teas go off related to later transitions, and become much less pleasant, woodier in a negative sense, and some stay really pleasant (I end up stretching out Dian Hong a lot), but this stay similar, just thinning. 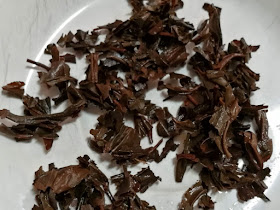 All in all a very nice tea, very interesting and pleasant, covering new ground for me.  The cost is a little high as black teas across a broad range of types and quality goes but to me value seems a selling point for this too; it seems it should cost more for what it is.  It wouldn't be an easy tea to find, maybe not even online, related to this specific type and quality level (it's clearly very good tea).  For overall aspect range matching preferences I'd probably still prefer a Yunnan black but related to the high degree of novelty this tea is much more desirable.