Wu Mei Oolong from the Toba Wangi plantation in Indonesia


A little back-story:  this is the second tea I've reviewed from this source, after trying an interesting black tea recently.  I visited Indonesia last December (they have active volcanoes there!), and had tried one very nice tea from Harendong plantation prior to that, but didn't find any great teas on that trip.  Grocery store tea in Indonesia isn't so bad, and it's almost free, but it's definitely not great.  That black tea was sort of a warm-up since a few others from them look amazing. 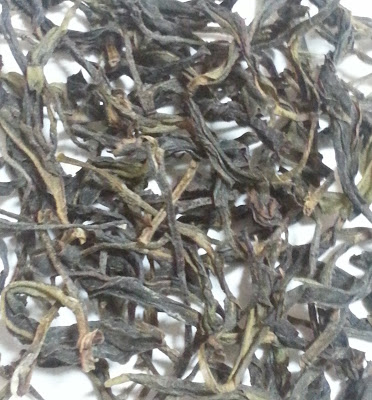 The dry tea smells like nectarine, in the range of fruity, sweet, and light.  The dry tea leaves are long and tightly twisted, on the vendor site described as looking like a dragonfly.  There are some different colors showing, definitely not the dark brown of highly roasted oolongs.  In tasting it I was surprised that it seems exactly like a Dan Cong (Chinese oolong), or at least it did to me.  In retrospect it looks like a Dan Cong too, but I hadn't made that connection. 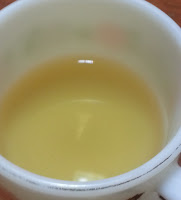 The tea brews to a golden yellow, nothing like more oxidized and roasted oolongs, which might be more light amber or golden red instead, at the opposite end of that oolong spectrum.  The taste is bright fruit and floral.  At first it seemed more based on fruit to me, but upon reflection it's really a good bit more floral.  At first it seems like a very simple, unified taste, but then later it seems more like a complex flavor that comes across as very simple and clean.


The exact floral description I can't place.  This is really my weakness when it comes to tea reviews, scent and taste memory for flowers.  It seemed possibly a type of orchid since it's very sweet but I can't distinguish between those, or be sure that's it.  I discussed it by message with the plantation owner immediately, while still drinking it, and he said he thinks it tastes like "mi lan" flower, or honey orchid.  Here is an interesting reference related to typical Dan Cong types and flavors, and that makes the list, but of course matching the taste is the difficult part.  The taste matches what I do remember of various orchid smells, but it's much lighter and brighter than actual honey.


As for other taste elements or description, it comes across as perhaps related to a type of melon, a bright, sweet aspect that's not exactly like one particular type of melon but still seems related.  I don't like most melons, actually, so odd to say that, but I do like this tea.  The taste aspects are completely positive, if all that makes sense. 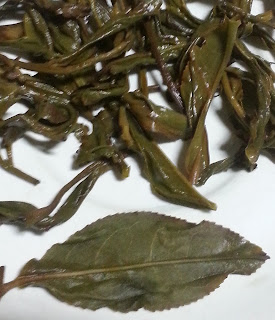 There is even a trace of that astringency that can come with Dan Cong, but it's very mild, really just a hint of the crispness that can relate to a novel form of astringency in some versions, a counterbalance of sorts.  If you brew it strong--which you normally shouldn't, per my own preference, but I tend to experiment--it will increase and be a primary flavor element, or maybe more of a feel, and it's not so positive that way.  Brewed lightly it's got a great balance, with nothing that someone would normally consider astringency, just a light feel of a little additional body, but still very smooth.  People already familiar with Dan Cong might be thinking this is enough description already, I get it, but for others these other aspects are sort of hard to explain.


The taste is strong and consistent across infusions, although with more tasting I might work out more about transition or possible variations.  After brewing the tea for many infusions I cold-brewed the leaves to draw the rest of the flavor out, and it made one more normal strength infusion and one lighter one, both of which were nice.  The tea works amazingly well cold, very light and refreshing, almost as sweet as if the tea had been sweetened, which comes across as a natural taste element that blends in well with the rest of the flavor profile. 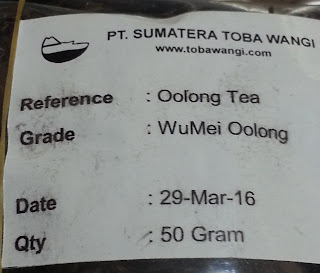 It seems like I could somehow be even more specific on some of these points.  As I see it they've recreated a good version of a Dan Cong, which is no small feat.  Surely that wasn't really the original goal, instead just creating a great oolong.  From talking to Galung, the plantation owner, the choice of degree of roast related to what made the most sense for the tea, and they've nailed that.  And the oxidation level, and for all I know that tightly twisted preparation may help with the final effect as well.


The next day I tried a conventional commercial Dan Cong version I have at home for comparison and the general profile is really similar.  That tea suffered in comparison to this one from Toba Wangi, not nearly as nice a tea, even though I would have described them similarly, bright flavors that are floral in nature, with mild astringency, etc.  That tea wasn't as bright, the flavors weren't as clean, and the astringency came across as stronger, muddling the feel and the flavor profile that makes this Wu Mei oolong so special.  It is a nice tea, just not quite on the same level.


Two types in and these Toba Wangi teas are just amazing.  For most producers that would already be the best they have to show, but there is much more:  a golden needle black, a "needle" style green, and most intriguingly a White Beauty bud and leaf white tea that looks nothing like anything I've ever seen.  I'll be in touch about those.
Posted by John B at 8:32 PM