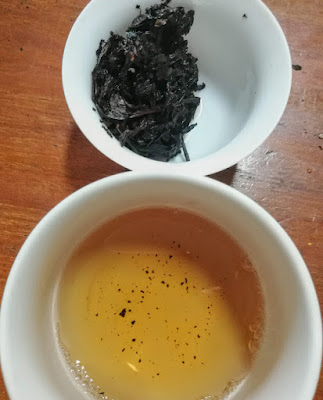 We visited Hong Kong and China something like 6 weeks ago (a trip summarized in this post), and I've only reviewed a couple of the lower cost sheng picked up from there so far (here).  I've made notes on a couple other sheng tastings I've not posted yet but it seemed about time to mix it up and write about something else, since I've been relentlessly posting about that tea type for a long time.


This is definitely something different; what I expect to be moderate quality Da Hong Pao (Wuyi Yancha, rock oolong), presented as a bundle instead of loose, twisted leaves.  There was a bundle of sheng pu'er we bought at the same shop; eventually I might mention that here, although maybe I won't too.  It would probably be more going on about the scope moderate quality sheng can cover, as in the only bundled sheng review I've written, about a local version from Vietnam, which they call trà chít or trà bó. 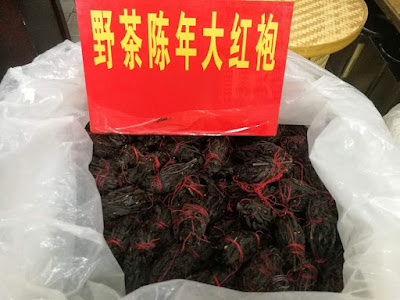 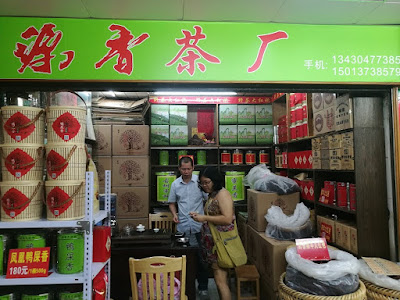 
The flavor is ok, nice. It gives up the subtlety some versions possess for mostly covering that one characteristic sweet caramel or toffee range some versions express. Beyond that there's the typical warm leather earthiness. It's not "good Da Hong Pao" in the same sense unusually high quality or well balanced versions are, like this one would be, but this is the characteristic simple profile that gets people hooked on exploring the type. It would almost be a shame to lose appreciation for it due to discovering other range, what better versions are like.

For going with a lower proportion (and not brewing sheng) this will work better at a longer infusion time. The initial round I brewed for over 20 seconds but I'll go a bit short of a minute on the second round, in order to try it in a different form. 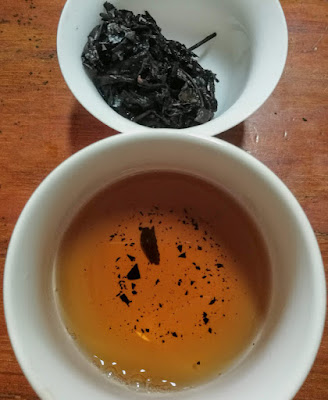 Cardboard picked up a little; that doesn't help. I'm still not ready to say that I don't like this. I've been off of mediocre quality Da Hong Pao for so long, or even the better versions range, that it's a nice break. There's still plenty of toffee sweetness and rich leather flavor, so it works, still pleasant. It's simple and basic in effect but that can be a good thing. The feel isn't thin, just not particularly structured, and the aftertaste isn't extended but also not non-existent. It's better than I would have guessed it would be.

The bundled presentation is just a novelty, and not one that adds more function than it eliminates by making you tease apart a bundle to brew part of it. It could work like a tea bag, to brew the whole thing, but that's a good bit for a single serving. Throwing it in a ceramic teapot for a few people to drink a few rounds from would work.  These would be cool for gifts just because it's not how people usually see tea presented, and it's a very reasonable quality version, which I wasn't able to judge with any confidence by sniffing the dry bin of tea. 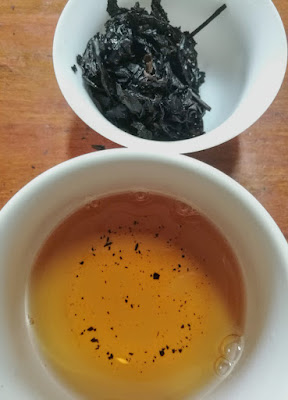 Still nice, but already fading a little. The next round brewed significantly longer might do it. It's funny how this tea could be so many different things for different people with varying prior exposure. For someone new to Wuyi Yancha it could be great, a positive start of a new chapter. Unless their natural preference didn't go that way, then it would probably just seem like a strange tea. Someone further down the path still might like it, or look down on it for being too basic a version. For a breakfast tea this sort of aspect range and quality level is perfect; something you don't need to brew carefully to get exactly right, but still pleasant enough to compliment lots of foods well.

I really like it; to me it's the tea equivalent of comfort food. It's like a steak lover eating meatloaf and mashed potatoes; it's not that other thing but still pleasant in its own way.  Eat enough meatloaf and you'd want to set it aside, but take a few years off and a good version is an experience of nostalgia beyond taste and the rest.  And sometimes you'd feel like having meatloaf instead of steak.


It makes me wonder why some of these versions can be this sweet, since that really stood out, especially in the first round. Without any trace of char or roast effect that input of roasting the tea to ramp up cooked-sugar flavor and sweetness would seem to not be it, but then that char range does fade over time. This version might be a fortunate case of a tea hanging around awhile and improving, which is not always how that goes.  The leaves being that tightly twisted probably enabled it to endure more air contact than really good tea should ever be exposed to, again seeming to work out to somehow balance overall character in this case.


The fourth infusion is also pleasant; that bodes well for extending to a fifth. The dark wood tone (which gets described in different ways in reviews, I think) still has a touch of cardboard edge to it but the sweetness, toffee flavor, and overall complexity make it work. It all extends a little to malt range, not like Assam black tea, but how malted milk balls or the shakes are, that mild, rich, almost creamy flavor.

On the next infusion it was spent, and not as pleasant as the fourth, with char ramping up due to longer infusion time required to draw out intensity.


I'd have bought more of these if I knew it was this pleasant.  I was just focused on sheng, and it was hard enough snapping out of that tunnel vision to grab these samples. I stopped short of exploring chen pi, the shu stuffed tangerines / oranges, but those were around too, and a vendor gave a sample of a couple with some sheng.  My wife bought a good bit of chrysanthemum, which seemed odd at the time, since it's here too and we tend not to drink that much, but it's really come in handy since my kids have taken a recent interest in tea (or tisanes, in that case), and they can drink as much as they like.


I'd definitely recommend visiting that market to anyone visiting Shenzhen, and beyond that anyone visiting Hong Kong to set aside time to stop by that other nearby mainland city too.  We dropped in using an on-arrival visa, not exactly the ideal process since who knows how long the queue that day would add to travel time, or if worsening relations with China due to a senseless trade war would narrow back approval of those.

As to travel time Shenzhen is an extra hour by train up the local Hong Kong rail line, easy to access.  Just make sure to download a local version of a Shenzhen Google Map, if that's even possible, or to switch over to an app version that will actually work online inside of China (or set up a VPN; you get the idea).