I mentioned a local Bangkok tea shop in that post about my son becoming a novice monk, the Ong Yong Choon tea shop.  It's near the flower market that's near Wat Pho, the Pak Khlong market.  I haven't been checking out many new shops in Bangkok for awhile, so this post about local shops from a year ago wouldn't change much based on what I've turned up since.

I'm finally reviewing a roasted Tie Kuan Yin rolled oolong from that shop here, about a month after buying it.  The tea is nice.  It wasn't sold as an exceptionally high quality level version, just a good basic tea, moderate in cost, and that's what it is.  It's a bit unique for the roast level not being unroasted (the "nuclear green" TKY version), or charred, the typical take on a traditional style.  It's in the middle, at a level that seems to bring out nice character in the tea.

An online friend visited this shop not too long ago and bought a decent Shui Xian there (Wuyi Yancha, a twisted-style roasted oolong instead).  I did "try" some of those by smelling sample jars and one of a few I sniffed seemed like it probably was pretty good, but I was in a hurry that day, midway through my son's ordination training at Wat Pho nearby, so I just went with some TKY instead.  I shared most of what I bought that day directly with monks in that temple.  Just because they have limited opportunity to go out tea shopping they shouldn't have to skip drinking decent tea. 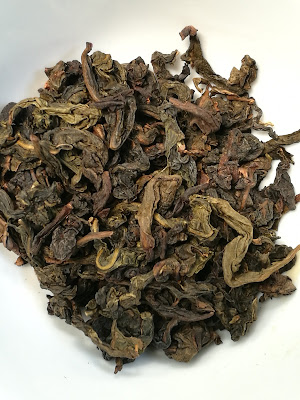 The tea itself is a bit dark, and has a nice roasted smell to it, a bit rich, maybe just a little off related to scent tone, along the line of old books or car engine smell.  Taste is the main thing; we'll see if that's clean, complex, and full or not.

It is nice on the first infusion, rich with good depth.  It's clearly a medium roasted version, giving up brightness and potential floral nature to pick up more depth and other range of flavors, warmer and in a different range.  A creaminess underlies the experience, not a foreground part of the aspects but a nice supporting element.  The feel and aftertaste check out, even this early in the process; both are not as exceptional as in the best examples of rolled oolongs but quite decent.

The flavor is complex, hard to pin down.  It might taste like a well toasted rice, which could be interpreted by some as woody, and part of it relates to that old book scent in the dry tea, although really it's closer to old furniture.  I mean that in a good sense; I can see how saying a tea tastes like a dresser or end table might not be a good thing.  It's clean, complex, and well balanced, so it works.  That one unusual part that gives it depth could easily be just a little off and the tea might be horrible (sour, or too woody, or just strange), but in this case it's not, it works really well.  It's nice tea.


For better versions of similar oolongs the complexity remains throughout many infusions as interesting and pleasant transitions continue.  For more average range versions of similar style tea aspects drop out instead of complexity picking up or shifting, and the taste range might drift off being as positive in later rounds. 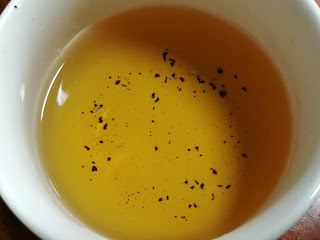 I went a little longer in the second infusion to get the tea fully opened up and brewing, so this will describe a stronger version (around a half a minute; I'm brewing the tea Gongfu style, in a gaiwan).  I'll try a short infusion (10 to 15 seconds) next and the tea should be unfurled and infusing well enough to show where it is clearly in early rounds.


The one aspect picks up more in woody range, which is nice.  It's not the bright, somewhat edgy woody aspect range that young sheng can sometimes express, which gets interpreted as lots of different things, more a tropical hardwood range instead.  Again there's a trace aspect that drifts just a hint towards nail polish that invokes old furniture, and again that still works out better than it sounds.  The mineral tones that are harder to notice ground that nicely, and the creaminess and fullness help it all make sense and balance.  Some would describe part of the sweetness as floral, maybe along the lines of lavender, versus brighter orchid tones in some other oolongs, and once I think of it that way that's clearly what it is.  It might already be clear in the rest of this but I do leave space for subjective interpretation in tea experience, for "seeing" or interpreting aspects in different ways.

Another way to interpret that roasted effect is through the concept / aspect description of "char."  Usually I wouldn't say much about that unless a tea is roasted a good bit further and does tend to taste like a charcoal.  Darker roasted Anxi Tie Kuan Yin can  be like that, and usually is, or more roasted Wuyi Yancha (Fujian twisted style roasted oolong, from the Wuyishan area instead of Anxi).  It works to say that trace aspect I just described as being chemical in nature really is that char, just a very light version of it, and that sounds a lot better. 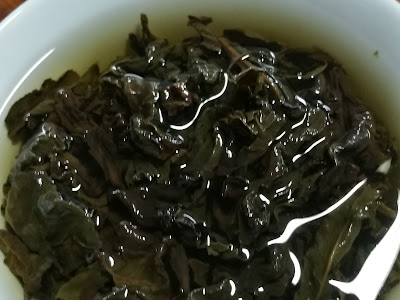 Per the input from the owner of my favorite local tea shop, Jip Eu, that aspect is preferred by most Wuyi Yancha tea drinkers in Bangkok.  My sense was that he and I both meant that it's one range of preference that people have, not really a higher or lower form of preference, or invalid, just different.  Cooking a tea to a cinder can cover up flaws, of course, and make it hard to appreciate more subtle aspects in a good tea, so to me it's not necessarily completely neutral as preferences go, but at the same time people can like whatever they happen to like. 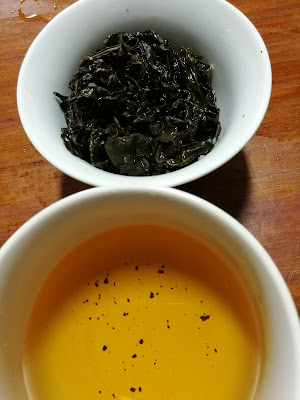 Even brewed on the light side that char picks up more in the third infusion, seeming more like char in this infusion.  It still does balance nicely.  It's clean and balanced; there is nothing wrong with it, with the roast seeming to draw out the potential of the tea.  On the more negative side there would be more depth of aspect range if this were better tea, more going on, and the feel would be that little bit fuller, with more aftertaste and overall intensity.  Tea that is good, balanced, and interesting is fine for me; I definitely don't need those extra levels to appreciate one.


All the earlier description still works for this infusion, the balance of them just shifts slightly, and it's as well to not overwork explaining in what way.


I took a long break from the tea, going out to get a haircut, and gave it a relatively short infusion to start back in, a bit under 30 seconds.  It seems about the same.  Often I would just leave off reviewing around this point anyway but since number of infusions and aspect character in later rounds is one sign of tea quality--not a direct indicator; those things can vary independently of quality--I'll give it a little longer and describe how it works out after the half-dozen infusion mark.

The flavors are still ok, still clean and decently balanced.  The char picks up a little since the more subtle flavors fade slightly but that doesn't.  I like the tea, but not everyone would.  If someone drank oolongs for the brighter floral aspects, or liked vegetal range, or the intense sweetness some exhibit this isn't on that page.  Even for medium level roasted oolongs some pick up more of a yeast / bread dough aspect, or flavors more like cinnamon or cocoa, or floral tones can still come through in a different form.  "Old furniture" wouldn't be a primary flavor range everyone is looking for.  For a medium quality oolong it's nice (with that sort of grading quite relative to what a person normally experiences), and I can appreciate the novelty of drinking a style of tea I normally don't get around to experiencing.

I bought an inexpensive light rolled Chinese oolong in a restaurant here a month or so back (maybe six weeks now), again a gamble of sorts, for what I think was 100 grams for around $8, so not that much of a gamble.  At that price and with very little information passed on, and from that source, I didn't have high hopes for that tea, but did hope it was decent and slightly interesting.  It wasn't quite as good a quality level tea as this one (which I think cost a little more but in that general range), and was much different in character.  It had some slight but obvious flaws but the general impression was positive, a bit on the creamy side, with decent complexity, and a reasonably "clean" overall effect.

This other Ong Yong Choon flower market shop tea is slightly better tea, but also just different, roasted more.  I guess I'm not as certain as I could be that they're both even the same thing.  They both could be Tie Kuan Yin, or then again it seems possible that other tea is local Jin Xuan instead.  I think this flower market shop tea was sold as Anxi TKY, but those come in a broad range of styles and quality levels, definitely not all a similar thing.


This tea is fading, around 8 infusions in.  It takes a 45 second to a minute infusion just to get the same intensity that a 15 second version had earlier on.  It's still nice though, still not "going off" and transitioning to negative aspect range.  If it was lower quality tea it would've done that before this round.  It seems quite possible for producers to give rolled oolongs like this one a bit more roast time to help mask flaws or transition negative aspects but in this case it was probably more about getting a desired aspect range out of a tea that was decent to begin with.

I went back to a medium length infusion time, a bit limited for where this stands now, around 30 seconds, and it's still nice on the lighter side, and not finished yet.  The feel is still decent and the aftertaste still works, and that balance of aspects hasn't changed much (mild floral, old furniture, creaminess, limited mineral base).  I think this might make a good old-person's tea, related to a Malaysian online friend commenting about how some vaguely related character in Liu Bao isn't for young people, and that younger people can't appreciate bitterness in the same way.  This tea isn't bitter at all, so maybe I'm mixing ideas and he wouldn't make that comparison.

I'll try to stop back and check out a better Shui Xian version.  Those owners speak perfect English (kind of strange, really, but one had lived in the US), and they were nice to visit and talk about tea with.  They mentioned that shop was there for the last 80 years or so, so beyond talking about tea versions they could pass on impressions of how tea culture has changed in Bangkok, and did so to the degree that limited time allowed that day.