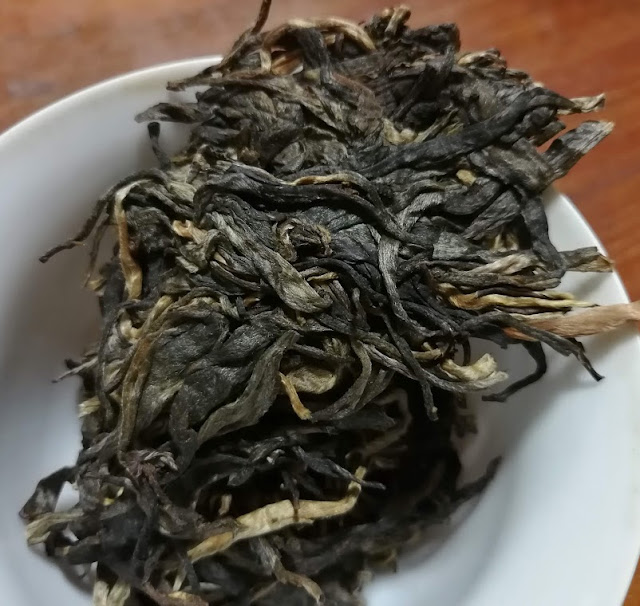 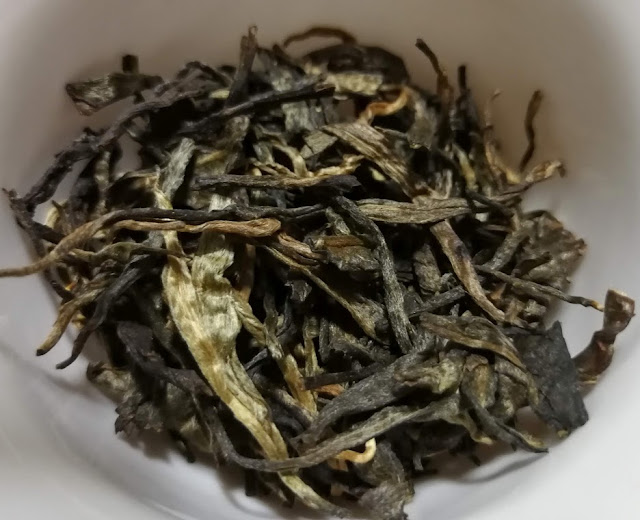 I'll look up his description (Andrew Richardson's, that vendor) during the final edit, but will go into this with only expectations related to the source area and age.  Lao Man E region versions are known for characteristic bitterness.  Both bitterness and astringency can fade and transition over time, with the pace depending on storage conditions, so I'd expect character to have mellowed some over 4 years.  At this point it almost goes without saying that different sheng versions are most positive after different storage time periods, or interesting in different ways, so this being 4 years old doesn't necessarily mean any one thing.

The leaf looks pretty good, on the whole side.  It's browner than some typically are; no further observation related to that.


~16 2016 LaoManE from Huang Chen Hao: this has been in my top five for some time. Between the slight Malaysian storage, taste, and visual leaf I was quite please... but the real kicker about this is the qi. I consistently feel come alive within me when I drink it. Truly a special treat.

I don't really "get" cha qi so that part won't work, but I could still appreciate it on other levels.

It's interesting hearing about "slight Malaysian" storage, especially since I already wrote the notes.  I'd assume that means Malaysian stored, but interpreted as not as wet-stored as can be a common theme from there.  The character seemed to match up with that. 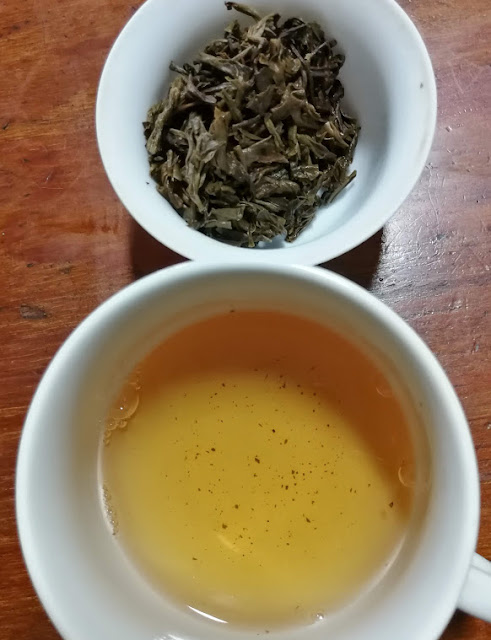 First infusion:  I let this go a little long (about 15 seconds) to avoid the round where I say "I'll know better next round."  That is a nice way to experience a sheng, to let the first round be just an initial glimpse, but time is a bit short due to us travelling later this morning.  And the chaos level in the house is at upper-medium, even less ideal.

This is nice.  Bitterness does stand out as a main part of the experience but not a blast that overtakes the rest.  Some pleasant warm flavor aspects join that, towards spice, with the feel standing out just as much, a rich fullness.  There's one characteristic feel that this matches that I won't be able to do justice to describing.  "Structured" is completely wrong, but saying "full and rich" sounds more like oolong thickness to me.  It's like the way a butterscotch candy has a feel to it, a thickness, along with that characteristic flavor.

I could do with this bitterness being a little more subdued and balanced but for this being a Lao Man E it's quite moderate and integrated; younger versions tend to express a real blast of bitterness.  The rest of this post will probably keep going on about other supporting aspects, since the complexity of this is good, and the sweetness and other flavor range isn't really caught by saying "towards spice." 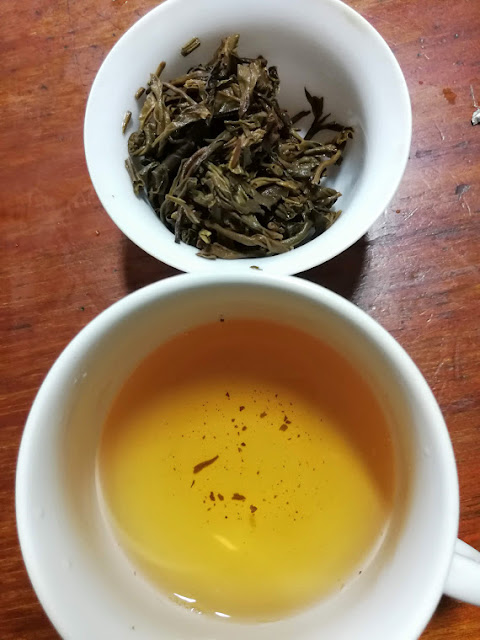 Second infusion:  This round I brewed for around 10 seconds, versus a more conventional 6 to 8, that I use along with a typical high proportion (typical for me), due to messing around instead of that being intentional.  Next round I'll keep it moderate and describe how that changes things.

The complexity of this is really positive.  Feel has a lot going on, and flavor extends to lots of layers beyond the bitterness, which is a bit softer and warmer in tone than it would be in any younger version.  This tea is in a decent place.  It would be interesting to try it in another 10 years since it seems to have great potential to go to a really interesting and pleasant place later.

That spice range seems to cover both a relatively neutral root spice effect and a hint towards a more warm aromatic bark spice.  Bitterness is right in between throwing off the balance of that other effect and complementing it.  Feel stands out a lot.  Brewing this light should make it easier to sort out flavor, and to experience this at more of an optimum. 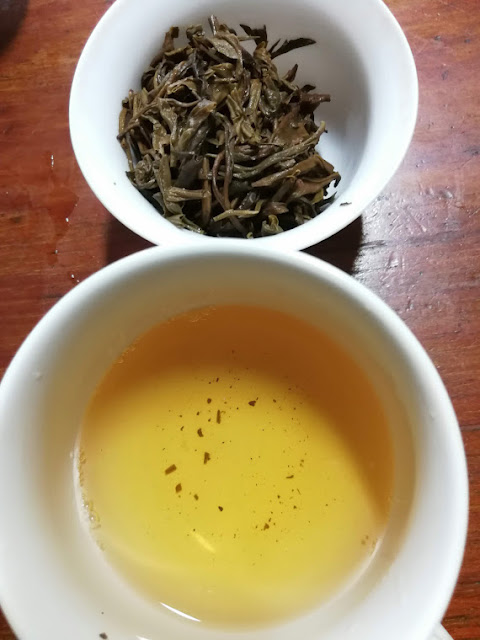 Third infusion:  slightly more pleasant, but then it was nice brewed a little stronger than I like too.  Bitterness doesn't fade in proportion drinking it this way; if anything it might stand out a little more.  I like bitter sheng, to some degree, where 4 years ago this would just taste like taking an aspirin to me.  It sort of still does, but I guess I would enjoy the taste of aspirin more now too.  Especially if it had a nice body and some spice tones to go along with that.  I'll get around to a more complete aspect-list description version next round. 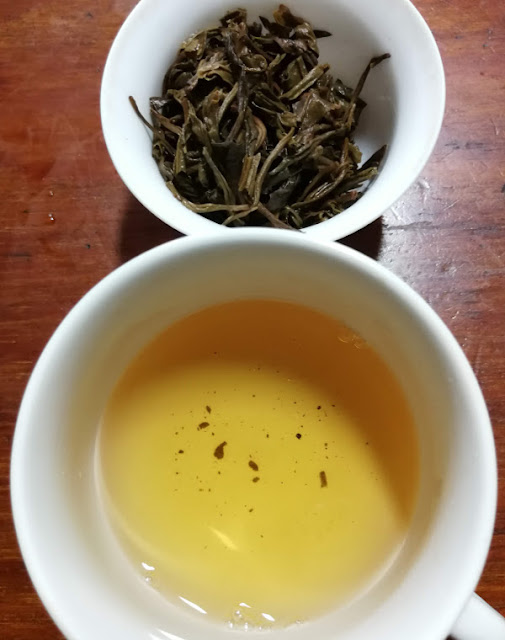 Fourth infusion:  this is leveling off a bit, falling into a more uniform balance.  That thick smoothness stays as pronounced as ever but bitterness fades a little.  Then again the warm spice tone seems a little more muted too, so that might just relate to using fast infusions the last two rounds.  I like the balance, where this is.  I've got another sheng version that's pretty close to this, I just forget which one, I think one of those 2015 or 2016 sheng versions that I bought from Chawang Shop.

I can't really guess at what storage input was for this, given I don't know the starting point character, and it's only four years old [although the description did say "slight Malaysian"].  It probably wasn't really dry; this seems to have had time to change some, and Kunming storage (where Chawang Shop is based) is good for preserving the original nature of teas, of stopping them from changing much.  Then again it could be that; what do I know.

I'd have expected Bangkok storage, the hot and really humid range, to have caused even more change, even without knowing the starting point.  It's great for moving things along a bit for fermentation level but perhaps not ideal for some teas for storage over 10 years, leading to less than ideal character.  Of course that would depend on the tea; for something that needs a lot of transition, like a Xiaguan tuocha, hot and humid conditions may be great, but for more subtle sheng that need to evolve and transition less dramatically maybe not so much.


Fifth infusion:  maybe the best round so far, but then maybe I've just let screwing up infusion times drop for a round.  The bitterness is balanced, integrated.  That warm spice tone range seems to merge with a warm underlying mineral range now, something I've described as towards iron bar or natural artesian spring in the past (two different things, but they overlap).  The part that works best is how well the different components balance each other; it will be hard for that to come across in a list-style description.  Even that feel is part of that, and the aftertaste experience adds to it, an extra dimension coming after.

Complexity is hard to describe too, how bitterness, warm tones, some cured wood, even pleasant and rich floral range all merge in this.  It's better tea than I often drink, probably not on a quality level I've never experienced, but it doesn't suffer from the limitations I usually experience due to buying relatively inexpensive tea versions. 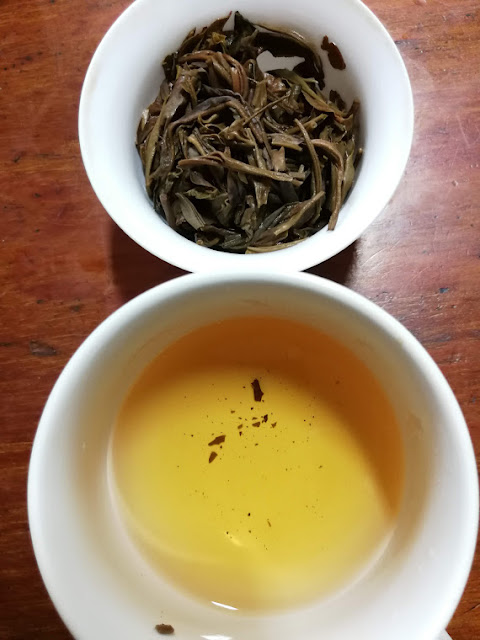 Sixth infusion:  this house has went quiet due to my wife and son running one last errand before our trip but I'll still need to wrap this up.  It must have another half dozen very positive infusions to go, with all of those telling a transition cycle story, but it's not a story I'll get around to telling.

It's interesting how this is a bit neutral in flavor tone in one sense and very complex in another.  More aged tea versions tend to land on that type of character sometimes, more so than a four year old tea version.  Really bitterness is still present, just very moderate compared to the first three or four infusions, and there's a lot going on still, but intensity seemed to have dropped way off in comparison with how this was.  It's interesting how benchmarks or expectations can slide like that, how a really good tea isn't that great if you drank an even better one just before, or it could seem amazing if you'd been on plain teas for awhile.  The same applies for novelty, and so on.

Aromatic wood tone along the line of cedar is picking up in proportion.  Maybe this would be better if the bark spice range had increased instead of the root spice (which is much closer to that wood tone, an overlapping effect), but to me it's still quite pleasant.  A mild floral range and good balancing sweetness gives it a full effect related to flavor, and feel range more than carries its weight, a very positive aspect range in this tea.


Seventh infusion:  more of the same.  I'll let this drop and try to enjoy rushing through another half dozen rounds, versus rambling on or trying to pick apart minor changes.

This tea was very pleasant, quite well balanced, complex, interesting in style, and obviously positive for quality level.  Over the next two years or so this would retain a similar positive nature, but it may well really shine with another decade of transition letting those changes run their course.  I suppose I'll never know.  It was really nice to experience as it is now, the general idea behind sheng tasting sets.

I don't have much for conclusions so I'll skip even adding a section for that.  It seemed relatively far along for fermentation for being four years old, but not so extreme that it was necessarily wet-stored, so pretty much as described.


That trip I mentioned delayed for a day, for a strange reason.  I was cleaning the cat litter boxes before the trip and accidentally set one of them loose while doing it, outside running around, probably not to return until later in the day.  At least I'm doing some extra down-time as a result, while my wife takes the kids to clear some errands.  I could use the day for recovery from re-starting running a few weeks ago, and yoga in the past week.

I've been considering breaking form and writing here about yoga.  It's interesting trying a sports-oriented activity (maybe yoga isn't really a sport) that you aren't good at, not normally how such things tend to go.  Then again restarting running after a very long time off was a bit rough too (not this recent time; I just took a couple months off to let my knee heal up).  And people look silly when they first start lifting weights, and so on.  I guess it's just normal.