I'm trying more of the teas sent by Gopaldhara for review, moving on from some more standard versions to two branded as types of oolongs.  This last post had covered two exceptional second flush examples, and this earlier one both a first and a second.  It was all great, but these should be a little less standard in type.

Per what I've tried in the past Indian oolongs aren't so close to Chinese versions in character, but I tend to not get hung up on categories or labels, or expectations in general.  The experience of the tea is the thing; that part works or it doesn't.  Keeping this simple, onto vendor descriptions and review notes:

This is a rare and finest Summer Tea or Second Flush oolong tea prepared from high-quality 144 clones at Rohini Tea Estate. The month of May is very interesting for low to mid-elevations in Darjeeling. Growth is very slow and the weather is quite dry, not too much rain. Good temperature and low humidity. It is a period of slow growth and also coincides with greenfly attack. It leads to stunted growth. You can say this the perfect condition for making Oolongs. Oolongs are very light delicate teas with complex flavours. They have a very high aroma and superb tastes. The teas are sweet and have a rosy honey-like flavour.

This is one of the finest Summer Tea Second Flush Muscatel Tea prepared from high-quality AV2 bushes at Rohini Tea Estate. This summer oolong consists of brownish-black leaves and few silver tips. It brews into an aromatic bright amber cup with a very smooth flavor without any astringency. The tea has a mouthful sweet and fruity muscatel character with a finish of honey and mango flavor. It has no astringency and is a very compelling make.

Oriental Oolong:  a little light, how a first infusion often goes, related to my own preference for brewing process.  I let this brew a bit over 10 seconds but knew that wouldn't be enough to draw out a conventional infusion strength.  To me that serves as an introduction to the tea, with the second where the real tasting starts.  It's sweet, complex, and pleasant.  It's really not so different than a very mellow second flush version, so far.  Citrus and muscatel stand out, with a lot of that a brighter citrus range than is typical for second flush Darjeeling, but then those can vary a lot.  Oxidation level seems to be in between typical first and second flush ranges; medium.  The feel may well be smoother and "rounder" than is typical for either first of second flush.

Honey Oolong:  that's especially interesting for including a lot of what is very typical Darjeeling range, just a different form of it.  There is citrus along with a vegetal range, like plant stem, but without anywhere near a conventional level of astringency.  Usually that particular flavor range and the strong bite of astringency go together.  This will be more astringent than the other, not surprising given that leaves are a bit more broken and it's a lot greener.  It is nice the way a notable honey aspect joins in with the rest.  This is probably a good bit more floral than the other, with that heavy on citrus fruit.  I'll hold off on a more complete list since it'll be easier to sort out next round. 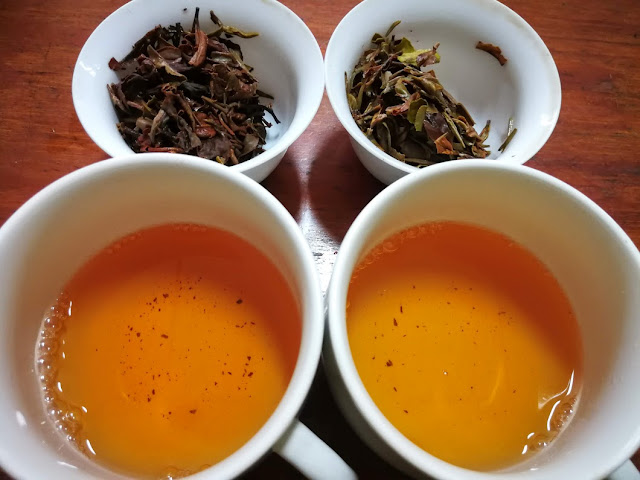 Oriental Oolong:  really nice.  Again this could pass for a mild version of a second flush tea, or really maybe as a strong-flavored version of an autumn flush.  The character is mellow in terms of astringency, but the flavor hit is there.  Range isn't so different from better second flush range, citrus and muscatel.  A good bit of floral range adds significant complexity to that.  It's interesting experiencing that intensity with feel being full but soft.  There's just a hint of dryness beyond that fullness, but astringency level is almost lower than would be conceivable for a standard second flush version.

The dryness indicates that it is closer to a black tea than to a Chinese oolong, as the oxidation level does.  Putting percentages on that doesn't really work well, even though it's standard for some people to do it, but I'd guess this is something like 50-60% oxidized, so not far off Oriental Beauty, but really even lower in level than most versions of that.

Honey Oolong:  the same story as for the other, but related to a shift related to a lower oxidation level.   Oxidation level is not that far off a normal first flush range, it seems (which is comparable to Chinese oolong range; 30% or so, if one must guess at a level).  Again a dryness pairs with the soft feel, but that other's is closer to the dryness in a black tea, and this is the dryness paired with a different feel that seems to associate with a different flavor profile, that vegetal bite.  There's tons of floral complexity to this, a strong hit across a broad range.

I'll give these less than 10 seconds infusion time; I think I went too light the first round, and too heavy the second, and that should do it, for this proportion. 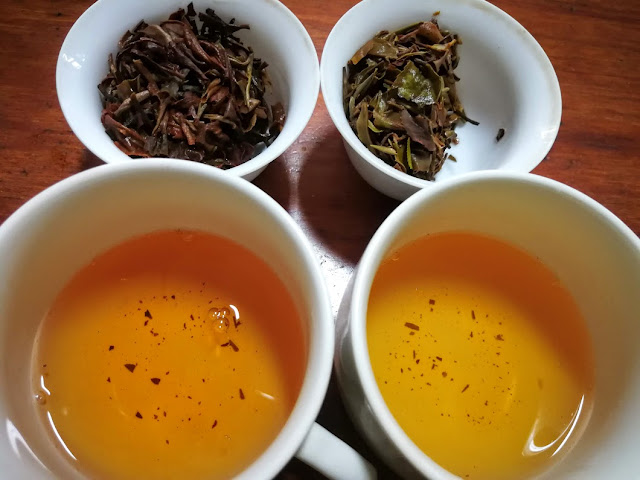 Oriental Oolong:  much better balance.  That flavor complexity is really nice; reciting a list won't do it justice.  It is just citrus, muscatel, and floral, now evolving to be more floral, with the flower type spanning a broad range.  Doesn't add much, does it?  The warm tone is great, along with the effect of that complexity.  This tastes like a warm version of honey, with the other more like a lighter and citrusy version instead.  Sweetness is great, feel is soft but full, and it really all comes together.

This is definitely not like second flush Darjeeling, in one sense, and in another it's just that.  The feel is in a different place.  That bit of dryness doesn't come across at all this round; it's just smooth and full.  I think that's from dialing in infusion strength and also part of a natural tendency for the first two rounds brewed Gongfu style to have a different kind of astringency.  It's quite good.

Honey Oolong:  same for this; it really hit its stride for being brewed properly and for evolving through some early roughness.  These are far from finished too; they'll be fine for another half dozen rounds.  I won't get far with notes because I've got something else to do though, always the way.

The nice thing about this tea, and to a lesser extent the other, is that if someone really loved that brighter, sweet, floral and honey range relating to less oxidized forms of Darjeeling, but could never completely get past the astringency edge, this has all the positive range covered but none of the latter.  It's strange, drinking it like that.  You can taste that flower-stem flavor range, a hint of it, along with a solid blast of complex floral range, but the normally-associated astringency edge just isn't there.  Even that edge of dryness dropped out, as for the other.

The full effect of roundness and fullness of feel present in Chinese oolongs doesn't come through.  These are soft and a bit full but it's just not the same.  The flavor intensity does carry over to some degree of aftertaste, a continuation of the positive range you taste while drinking them. 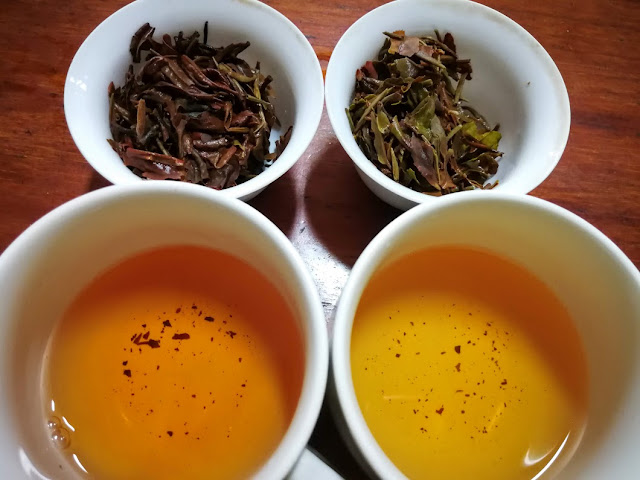 Oriental Oolong:  some positive flavor transition is working out; this trails a bit towards spice range.  It's cool that it breaks past being standard second flush aspect range, just without the same astringency concern.  That spice flavor is hard to break down.  It's almost like it borrows a little from a few different versions, a hint of a root spice and bark spice, maybe with just a trace of some seed included.  It's nice that the complexity picked up that much, and the novelty.  It's still covering a decent amount of citrus and floral complexity.

Honey Oolong:  this version didn't change as much as it all just integrated much better.  That heavy and complex floral range now combines in a much tighter and different way with the "plant stem" effect, which is mellow, as far as both related feel and taste goes.  I didn't "see" it as not-integrated before, but with it all combining in a way that supports an overall experience so much better now I do.  An interpretation of this as fruity instead of floral would make sense this round.

These are great.  The descriptions won't do the experience justice.  Before this round I was ready to leave off at saying both are like conventional Darjeeling aspect scope, just with a much smoother, fuller astringency effect, and very positive and complex flavor range.  At this stage it's more than that; they integrate better, evolving to be slightly different.  I bet two more rounds would tell more of that story but I've got to run; I never have two full hours to do a full tasting on the weekend mornings.  I can comment further thoughts later, but I'll let the round-by-round note taking drop here.

These did produce additional very positive infusions but didn't seem to evolve related to aspects changing much.  Within two to three more rounds the intensity and range dropped off, but they were still far from finished.  Stretching out the cycle, using longer times to go through additional rounds, worked out well; character stayed very positive, just more limited.

These are two of the more interesting and positive Darjeeling examples I've experienced.  That second version, the Honey Oolong, is less familiar to me for being oxidized to that lower level, but I vaguely recall trying other versions like that in the past, a long time ago when I was exploring Darjeelings more.  I'm not completely keeping up with Chinese oolongs now for focusing so much on sheng pu'er, never mind Darjeeling, or Assam and Nepal teas, and so on.

These don't seem much like Chinese oolongs to me, but that doesn't detract from how positive they are.  Flavor intensity, complexity, and positive range are really unique for both, and feel and aftertaste work out well.  They're not full and round in feel in the same way Chinese oolongs tend to be, or fruity and floral covering the same scope as Dan Cong, or similar to Wuyi Yancha for integrating roast-related complexity, or cognac or perfume-like character.  But they are both great in their own way.

If anyone had experienced Darjeeling as very positive in flavor range but had trouble getting past forms of astringency these represent a natural resolution for that.  Even the flavor range, taken alone, is more positive than all but the most exceptional other forms I've ever tried, and the exceptional feel doubles up that positive effect.

On a different subject, I've not been sharing family photos that much lately, not that I get feedback about the omission. 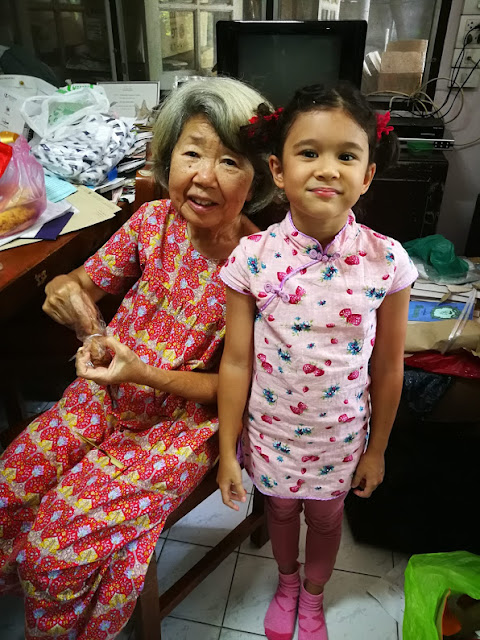 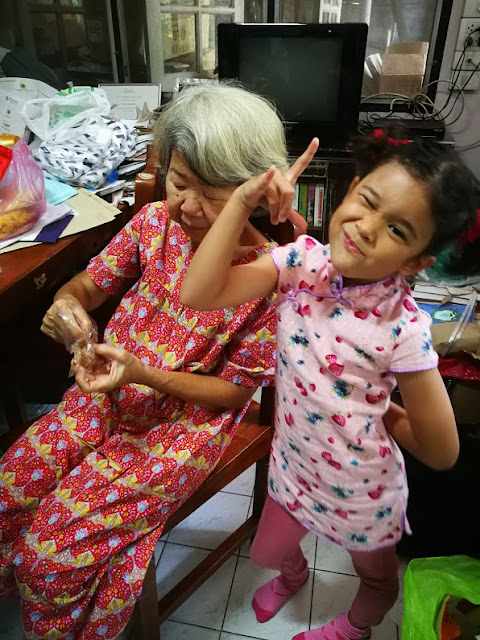