Back to this general tea type, with an example that was even better.

I comparison tasted a Chi Ye Dan Cong sample my tea-producer friend Cindy Chen sent along with the one I bought at the Jip Eu shop in the Bangkok Chinatown (the shop link, and that earlier post link).  It was amazing how they did come across as a general similar type of tea but very different.  Related to the source, it might seem odd that a tea maker from Wuyishan would provide tea from a different part of China, but Cindy has family there too, so it's definitely not tea that routed through some market.

Usually I feel like I can't completely describe what I taste and experience in a tea but I do go ahead and express a lot about them.  For this tea I had even more trouble with that, especially at first.


Where the other Dan Cong was complex, exhibiting a range of floral and fruit tastes,  this tea had a much simpler profile, at least related to number of taste components.  It was sweet and rich, subtle and well balanced, probably even a bit elegant, but the first time I tried the tea it was hard to describe, to put my finger on a primary flavor.  I guess the general range was floral or fruit (which is really general), but not so much like a flower I'm familiar with, or similar to other floral teas.


The second time I tried it there seemed to be a clear primary taste to it:  peach!  How could that be, that I'd missed that?  It hinted a bit towards plum, and the profile had a depth that could easily extend into a floral range, but it wasn't really complex, a unified but substantial range of flavors, along with a nice rich feel.  I think part of the difference related to comparison tasting, which did help with comparing some common attributes, the "brightness" or feel of the tea, and with contrasting the effect of the astringency, but somehow it was all too much going on.


This part might seem a little strange but I think the main factor was background; it was too noisy the first time I tried it.  I often try teas on the weekends when there is more time to sit and brew them for longer, to run through lots of infusions, but this time my daughter was calling for me to go and play with her, yelling quite a bit.  Between the brewing details and trying two teas and that racket it was too much for really focusing in.


The astringency in the other version isn't really present in this tea, but it wasn't completely soft either, it had a little bit of body.  It was sweet, but even that isn't easy to describe, nothing like honey, not the same type of bright sweetness the other tea had, maybe a little towards caramel but nowhere near as heavy handed, so nothing like that.  At some point the words just don't capture it.


I drank an Earl Grey not so long ago and in lots of ways it was the opposite of that tea. Of course the flavor profile is completely different, a lighter oolong versus a flavored black tea, but I mean even beyond all that. 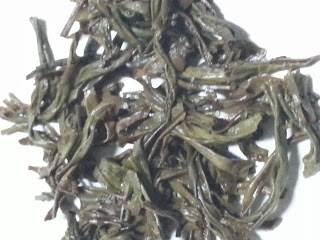 Where Earl Grey is a familiar tea, not so subtle or complex,  straightforward and easy to brew, something of a "comfort" tea maybe, this tea benefited more from getting it just right.  It seemed to have an unfathomable depth of character, subtlety, with a simplicity to the range of taste that contradicted how full that was in a different sense.  It was more to take in.


The feel and aftertaste weren't necessarily as pronounced as for that other Chinese oolong category I'm usually dwelling on but it gave nothing up in total effect.  All those crazy things tea people tend to say about getting subtle details right that could hardly matter, like how you pour the water onto the tea, probably do actually apply for it.


Nope; not this time.  If you ask Google about Chi Ye Dan Cong it's a bit stumped.  A few vendors sell something they call that, but they don't offer any description at all.  There must be some reference articles that go deeper than I've turned up yet but nothing an hour or two of shaking down the internet points out.  Some teas go by multiple names but it takes a reference to identify that.  Cindy did mention that "chi" means red and "ye" means leaves; obvious enough connections come to mind there.


The Tea Obsession blog, by Imen Shan, includes a lot of information about the general type (a lot!), but I went through background about that last post.  I didn't mention this Los Angeles Times background article on her, and on Dan Cong in general, which describes her as "America's only specialist in Dan Cong."  This was back in 2009, so maybe there is another by now.

Of course I'm not claiming this tea I tried is as good as the ones mentioned in that article, or comparing them to what she's discussing in her blog.  It was a very good tea, unlike any other I've tried before, but I'd need more experience to make those sorts of relative judgments.  I'm still considering whether it objectively tastes like peaches or not, although to some extent it really does.  It may well be a dead-on match for some unfamiliar floral taste that I don't recognize, which just happens to also come across like peaches, to me.

It's a good chance to revisit another subject I just got around to starting in a post about Thai pu'er-style teas, about differing experience of tea, an identified natural progression of preference not just for tea type but instead for ranges of aspects of tea.

It's a bit long to quote it all, but that was all started with a progression of preferences referenced in the "Tea Addict's Journal" blog:

It is indeed true that beginners tend to drink with their noses – fragrance, above all, is what they focus on. This explains why jasmine is a perennial favourite of so many casual tea drinkers, and why a light oolong or green teas tend to be “gateway” teas that get people in the door – they’re fragrant and they’re nice to drink. Then, as you progress through the collection of more experience and the like, you start learning about the nuances, and the mouth comes into play – the body of the tea, whether it stimulates the various part of the mouth, the tongue, whether it is smooth, etc. Then finally, you get to the point where you are drinking the tea with your body, where the taste, the fragrance, etc are all less important than how it makes you feel. You can call it qi, even though I dislike the opacity of the word...


I talked around those ideas just a little in that earlier post, but input from Imen about them an online comment pointed out a bit clearer how it all might fit together:

I have to disagree with the last part where aroma fragrance are no longer a significant part in selecting a tea that can also have obvious qi impact. One can say they prefer richness over aroma when all elements exist separately only in different teas, but when one single tea has all those elements combined, that's then called a truly supreme tea. A tea without both aroma and yun (depth and a bunch of other words) is not a great tea by standard.


Seems obvious enough, right, that a tea has to exhibit the whole range of positive qualities to be a great tea, but again it's not so simple to put it all in such a clear perspective as that comment did.  Turned around a bit, flaws or limitations in a tea would seem to impact the overall quality to a degree that relates to what a person prefers or doesn't prefer in a tea, tied to these characteristic preferences by both type and specific aspect.  In that comments discussion I expressed it this way:

It is interesting the degree to which people really do say they essentially don't care about some factors, like taste, but what they mean is that they will focus on others more, not that they are ok with drinking flawed or mediocre tea.


Or maybe some are.  A vendor whose company would be familiar to many recently expressed that he's not overly concerned with taste elements, so it seemed natural for him to not list anything at all about that on a product description.

The obvious limitation to that, which I mentioned to him before writing this other related post, is that the description could benefit newer tea drinkers that may not be as familiar with the product, who may make a decision to buy it based on such information.  There was no description, actually, so it was implied by omission that it was a good example of that relatively standard tea type, presumably with the additional positive attributes that he was concerned with (feel, etc.).


To switch to one more tangent before closing, all this reminded me of reading an article on the role of a tea master recently, in an interesting reference called "The Leaf," with the article written by Thomas Leons:

A cursory survey of the internet on any subject, including tea, will, for example, turn up an astronomical number of websites.  Searching through them you will find thousand-page-long blogs, and after reading through them you then realize that the person making all this noise only started learning one month ago, and—like you—has no teacher… how can you ever really accept what you overhear?


Of course I'm not going to get into answering that, at all, except to point out the obvious, that tea is on some fundamental level experiential, so the basic point is never really what you learn or hear anyway.  It takes some doing running across better teas though, and you still have to prepare it, so knowledge does play a role, and there is an experience curve to contend with.  It's probably best not to get too overwhelmed by what is available to read, and various other forms of input, to work with what appeals to you, with whatever you've got, but to not try to drink a river of knowledge or obsess about finding a master (unless you're really into that--then why not).  For me it's even helpful to look at drinking tea and learning about tea as two separate but related things.

And of course I am one of those beginners, so best to take what's here and most places with a grain of salt.