More teas from my favorite Wuyi Yancha farmer and vendor, Cindy Chen!  Many thanks to her for providing those latest samples.

Since reviewing a number of her teas earlier in the year--this was the first related post, a Rou Gui in March, but there were others--I ran across a vendor profile of her by Tealet, a tea company that needs no introduction.


But just in case, Tealet's business premise relates to selling better teas directly from farmers.  It's essentially a type of a fair-trade theme since they can provide better compensation to farmers, and at the same time settle issues of sourcing transparency; customers are really clear on what they are getting.


It's a lot more difficult to just get in touch with a tea farmer, but to some extent that would work too, with the obvious limitations.  Someone you only talk to online claiming to be a tea farmer could just sell mid-grade tea from a wholesale market, so any claims about specific growing areas or not using pesticides wouldn't count for much.  It might be a problem just identifying what type of tea you are actually buying.


Reviews, one of the Rou Gui from Cindy:


Nice!  A very good, normal Wuyi Yancha; normal if you normally run across good Wuyi Yancha.  The level of roast comes across first in the scent; it's medium, maybe leaning towards darker.  The typical sweet earthy and mineral scents also stand out; lots of complexity.


The tea has the distinctive Wuyi Yancha flavor profile, mineral, some earthy components, a pronounced aromatic element, and the slight edge of the roast, but not much in the way of "char" as some versions can have.  In some dark roasted teas it can actually incline a bit towards charcoal, which can be hard to appreciate.  The aromatic aspect is perfume-like, hard to describe, sweet, related to floral, but also leaning towards slate or graphite or ink.  Cinnamon is a primary flavor, accompanied by sweet earthy aspects, like fresh dark leather, which I mean in a good sense.


The feel is full and smooth, with a pleasant lingering taste.  A year ago all that would have been a more unique experience for me, but now I try to compare it to other nice teas.  Is it richer, is the balance better or worse, is the roast level a great compliment to the other characteristics?  I'm really not completely sure.  It's better than the average Wuyi Yancha one runs across, by a good bit, but it's harder to place it related to other better versions.  Taste is a factor, but another part is gauging if the feel and the aromatic qualities are exceptional or just quite good.  Comparison tasting would help with that. 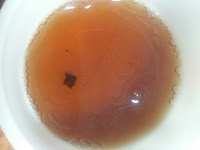 It seems odd turning around the experience, drinking a great tea and asking what isn't as great about it, instead of just appreciating it.  Reviewing a lot of similar teas could lead in that direction but it wouldn't necessarily have to.  It seems partly the effect of tea-forum talk, too much input of "my tea is better than your tea;" taking that up and trying to pin down exactly how good a tea is.


I'm also reminded of the differences between what tea bloggers do, give a description of a nice tea, and an impression, versus people judging and grading the teas, where that type of process needs to go much further.  To be clear I'm not even ahead of the curve related to tea bloggers, just another guy drinking tea.  Cindy just mentioned taking part in a Wuyishan tea contest related to black teas, which helped raise that subject.  They took 7th in that category; probably really exceptional for that type of event and the range of participants.  But the review of their specialty scope is coming up next week, related to oolongs.  My favorite!


Back to the tea though:  it seemed like a very good example of a Rou Gui, but that it could be better in a few minor ways, slightly better feel, slightly more aromatic element, slightly more complexity.  But it seemed odd being that negative about it.  The tea is ridiculously good, better than almost anyone will ever know exists (of course it helps liking Wuyi Yancha to have that impression), but there was perhaps room for those tiny improvements.  This was roughly how Cindy passed on the grade of the tea, as they evaluate it, a good tea but not the best they produce.


One might wonder why they produce different levels of tea, why it's all not equally great, aside from minor differences related to slight variation in plant sources.  I've written a post about that, something very informative, based on input from Cindy about different tea processing, so I'll get back to that, just not in this post.

I also tried comparison tasting this tea made from bottled spring water against  filtered Bangkok tap water, related to discussing water differences with someone recently.  Of course the filtered tap water retained a bit of mineral taste, towards chemical, that threw off the taste a little.  Both had been boiled, so that shouldn't be chlorine; hard to say what else was in that water that contributed to it.  We plan to install a much more sophisticated multiple-filter multiple-step reverse osmosis filtration system to get away from using bottled water in the future (the kind that office water coolers use).


To really help identify subtle characteristics of a tea it's best to comparison taste with a second, highlighting the strengths and weaknesses of each.  So I tried that next, the next day, but with two different teas.

Round 2; a different Rou Gui compared to a Da Hong Pao

Ideally these should be the same tea type to limit the natural variances and highlight subtle differences, but I wanted to compare one of the Rou Gui samples to a very good Da Hong Pao example I bought not long ago.  The idea was more about comparing grade related issues than the teas related to those types.  I bought that tea from the Jip Eu shop in the Bangkok Chinatown, the same place I picked up this Ban Tian Yao (another Wuyi Yancha type).


I wrote a review of that Da Hong Pao but haven't posted it yet since I'll be sharing it somewhere else too, along with a lot of back-story about Da Hong Pao.  Lots of the research-theme blogs working lately; I guess it goes in cycles.


In one sense that's about a much more interesting subject than this post, just reviewing teas.  As a preview I will say that Da Hong Pao is not the only name for this tea, and the general type has a bit of an identity issue.  Suffice it to say this one I'm writing about is one the best Wuyi Yanchas I've tried, although hard to place what that really means.  This tea made me reconsider that the unusually strong aromatic element I'd tried in Rou Gui teas before was only related to that plant and tea type, and not just related to a potential in other similar teas.


Both teas were excellent, both quite different.  Different in a limited sense, of course; if someone wasn't so hung up on trying different Wuyi Yanchas they might seem about the same. Since characteristics by tea type and specific tea properties are separate things, with lots of possible variations, maybe all this could be a little less clear presented this way, with the ideas mixing.


The Rou Gui is very nice, perhaps more distinctive than the other, in the sense of exhibiting complexity and the aromatic component better.  A pronounced cinnamon flavor stood out, with other mild earth tones underling that.  One spice element was difficult to identify, something like an unfamiliar sweet root herb, towards sassafras but not exactly that.  Combined with the sweetness it came across a little like butterscotch.  A mild wood flavor joined the other tastes.  Do I even have to keep saying "mineral?"  To me that's the context of the flavors, not a pronounced primary element, just part of the background.


The Da Hong Pao is even more aromatic, almost like a perfume, but with a different flavor character.  Both share that similar mineral undertone, without much in the way of "char" for either.  Both have good sweetness, clean flavors, a good feel to the teas.  The flavors of the Da Hong Pao extend more to typical range for better examples of this type:  floral, seemingly related to the aromatic element, dark wood, leather, sweetness related to a brown sugar range, falling short of the flavor strength of similar molasses components.  Of course brown sugar and molasses are kind of related, with raw cane sugar juice the unprocessed input for both, which you can buy fresh in tropical areas. 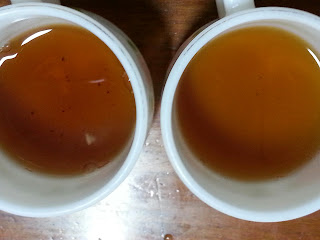 In terms of aftertaste the Da Hong Pao is stronger, and lasts longer, related to the one aromatic component carrying over.  It could be too much related to some people's preferences, although it seems generally regarded as one of the characteristic components, so I'd  imagine it would normally be seen as positive, no matter the level of intensity.


Just thinking that part through makes me consider how identifying the positive aspects of the tea individually seems to leave out something about balance, considering how well it all works together, the synchronicity of the tea.  It's some good tea when taste and feel and general impression references stop being enough and it's time to focus on balance.


Across infusions both stay really clean, full, and consistent.  Although the flavors differ the character is similar enough that a preference for one over the other might well come down to how one feels about the aromatic component in the Da Hong Pao.  Again it's worth noting that the Rou Gui is also quite aromatic, just in a range that is intense but still more familiar.  Or maybe the shift in the profile related to the two different types would tip the balance for some.  For me I love them both, and feel lucky to experience such tea.