I recently attended an expat meet-up event with an informative presentation theme, Random Thainess, and presented about "Experiencing Thai Teas."  It went well, and was well received.


The event was hosted by Expique, a local Sathorn (Bangkok) travel tour agency, (more on them here, and on their events here, rated on Trip Advisor here).  Other speakers presented about the role of model / presenters in Thailand ("pretties"), on Thai culture related to Thais living outside Thailand, about cemeteries in Bangkok, and about a local charity agency that supports rescue or assistance to Thai sex industry workers, some of those human trafficking victims.  Food was served, with proceeds from entrance fees covering events expenses and going to that local charity.  Maybe 30 or so diverse attendees were there, a nice small group, with some Thais attending, but mostly expats.


Why would I present something there at all?  It's part of a mission to share tea experience and knowledge, more about what this blog is about.  Public speaking really isn't an interest, but since it tends to come up in my work I don't really mind it either.  This blog was intended to discuss tea with like minded people, or even as an introduction, but of course it ends up preaching to the choir more than reaching out to people who don't already like tea.


The same type of consideration seems to apply to the event; why do they do this?  It was interesting, and my impression was that it evolved from other functions, a twist on other versions of expat meet-ups.  It's not so easy to describe the cultural discontinuity that can go along with being an expat, perhaps not so much an issue if one falls into a conventional expat interest group, like various bar crowds.  But expat lifestyles and interests vary, and not everyone spends evenings sitting on a stool next to other like minded individuals.  Also Expique does work related to tours, and background about Bangkok and Thailand fits with that, even if the meet-up scope ventures further.


I served tea at the same time, an Anxi Tie Kuan Yin and Taiwanese Oriental Beauty (heavy on cinnamon, that version), so not actually Thai teas, kind of strange.  They're close in style to some Thai teas, and what I had on hand.  I'd also brought a Thai Jin Xuan cultivar based black tea that would have worked well brewed in volume, but somehow sticking with oolongs seemed to make sense, they're interesting and approachable.

A bit off the tea subject, I'd made some papaya leaf tisane over the weekend and gave away four samples of that (herb tea, to many, so overlapping, but "tea people" are jealous of sharing that word).  By "I made herb tea" I mean papaya trees grow at our house, and making a tisane from the leaves is something I've been experimenting on, mostly just drying them, but I roasted that version a little to change the flavor.

I'll share most of the content I actually presented here.  It's quite basic, with the idea being passing on what one might say to introduce tea in less than ten minutes, as much as actually covering the subject of tea in Thailand.  This reminds me of blogging meeting Slideshare, so I did in fact upload those to Slideshare, so you're welcome to use them yourself. 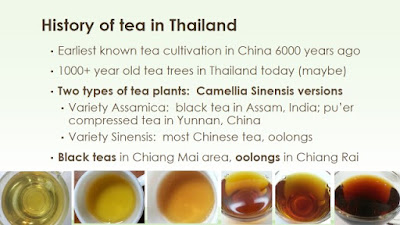 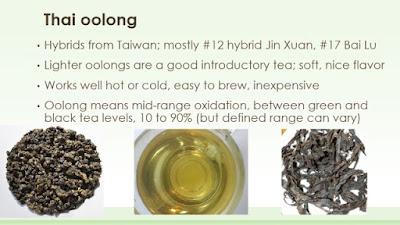 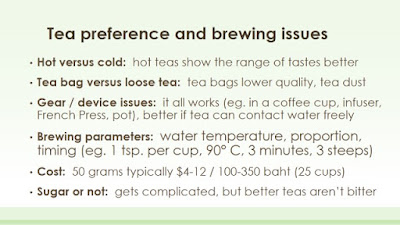 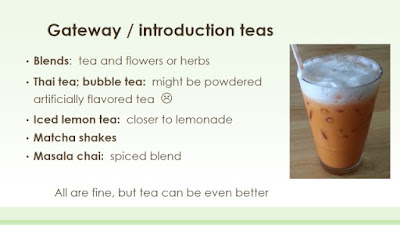 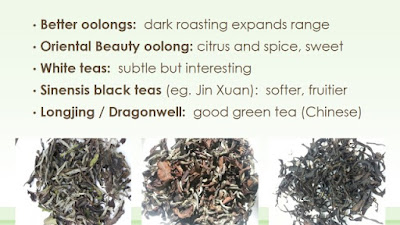 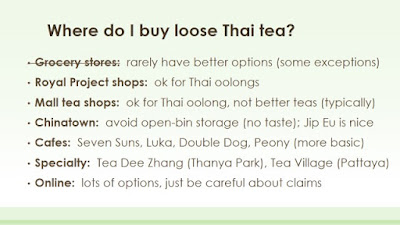 It was a lot to cover in a short span, but some nice follow-up questions filled in some obvious gaps.  People asked about caffeine in tea, how much someone could drink in a day, and about regional differences in teas (Thailand versus elsewhere).  Of course I missed a lot more than I covered, for example I didn't get around to mentioning that people in Japan tend to drink green tea, or get into Gongfu brewing, because there just wasn't time to drift around the general topic.  I also didn't mention that they actually do make hei cha in Thailand (dark tea, compressed tea, like pu'er), or any number of other tangents.


I've been considering setting up a completely tea-themed expat meet-up, the right venue just hasn't turned up.  Since I have young kids I'm not really active in attending meet-ups, since staying out until 9 means I'll miss seeing my kids that evening, not something I take lightly or do often.  But eventually something might work out.  For now it's great that a small group of people know just a little more about tea, and tried a decent version.