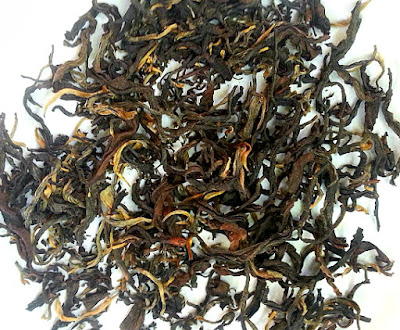 To start, happy birthday to me!  I'm 48 today, getting up there, or at least was when I wrote the initial draft, a day ago now.  I've had a cold lately but I'm ok enough to review tea this weekend, so I finally opened a package of samples provided by Farmerleaf tea.  It felt even more like my birthday; they sent an amazing range of types of teas.  I was expecting pu'er, which is nice, and kind of their thing--they produce and source tea based in Yunnan; see background here, and here--but it went way beyond that.  The tea I'm trying is an Autumn 2016 Jing Mai Black tea, but another is a Chinese version of an Oriental Beauty, and another is a moonlight white.


I've always really had a thing for Chinese black teas, especially well made variety Sinensis versions, sweet, floral or fruity, rich, and unique.  Of course these are going to be variety Assamica, which run earthier, but which have lots of potential to be amazing teas as well.

The tea is just beautiful, with dark, multi-colored, long and twisted leaves.  Being an autumn version brings up some interesting questions about character differences due to different harvest times; maybe I'll look into that background more later.


The taste is a bit earthy, full and rich, across a range of earth-tone aspects, more or less centered around an autumn leaf smell.  The flavors profile is clean, with next to no astringency, just a bit of fullness to the body.  From there it seems natural to try and break the tea into a flavors list, although the most impressive aspect is the way it works together, the general effect.  The tea is unique, another very nice way that black tea can be.  I've tried teas that are quite similar in style but this pulls the type together as well as any, perhaps a little better.  Back to the flavors-list. 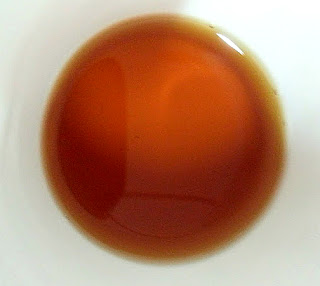 A rich, earthy range stands out, with that autumn leaf maybe alternately described as medium-dark hardwood, but more complex than that.  With some black teas negative aspects that seem related to this flavor range can creep in, a bit of rust or fungus, or coarse astringency.  This tea's flavors and feel are clean and positive instead.  There is a mineral undertone, difficult to pin down as rock-tastes can be, but that's mild and well integrated, and serves as a positive contribution, a base for those other flavors.


Jing Mai pu'er--the few I've tried--run a bit floral (and also mineral; kind of standard for pu'er), but this breaks a bit in a rich fruit direction instead.  It's not so distinctly connected to one fruit that I can call it, maybe be in between cooked dark cherry and yam.  It seems based on personal review style a list-description might just include both of those, rather than to say an aspect lands in between, but that's how it seems.


The feel of the tea is nice, soft but really full, with a bit of structure but not really an edge.  There is a trace of dryness but at the same time it's juicy.  It all balances well.  It's perhaps even a bit soft for someone that prefers more edge and structure but for my preferences it's right where it should be, easy to drink but still interesting.  There's really nothing of flaws to talk about in the range of aspects; it could be a different type of tea, but for the type it's just right.

I'm preparing it by a modified Western style approach, upping the proportion a little from a more typical Western ratio, for me a good fit for the tea type.  That unusual feel starts to stand out even more after a couple of infusions, a slight dryness coupled with juiciness, with an extra quality that hangs around the tongue after.  Unless I'm mistaken this is the aspect described as "resinous" by fellow tea blogger Amanda who writes My Thoughts Are Like Butterflies.  To be clear, that aspect is a good thing, although maybe that's just per having that preference.

The flavor range actually does transition a little, but it's hard to pin down.  It moves towards a light leather element that really was a secondary aspect giving the earlier aspect range more complexity.  This is going to sound crazy, perhaps, but I'm also going to claim that leather is one of the flavor elements that is positive in commercial blended black teas, like Lipton.  I've not been drinking those for ages, so maybe I've just walked off the map into my own imagination a little.  Put another odd way, it tastes like tea. 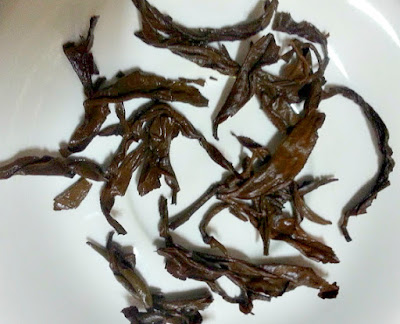 I haven't mentioned sweetness, but the tea balances fullness, earthiness, and dryness with a good level of sweetness, not really a "sweet" black tea but with the right amount.  Undertones / complexity in terms of flavors might come in the form of other root or bark spice trace aspects (which really needs some unpacking to mean anything), or maybe even that rich sweetness in  the smell of fermenting wet sawdust.


Which leads to a tangent:  how would someone know what fermenting sawdust smells like, or different types of fungus or rusting metals, different rocks or minerals, and forest floor?  As a child I played in the woods of rural Pennsylvania, sometimes barefoot, and we had an old lumbermill on the property, with an old sawdust pile fermenting through the ages.  Old versions of oil well equipment and iron smelting furnaces would turn up in different places, and of course we would play by damming up creeks and digging to see what was underground.  It was a great background for smelling different smells.  Later I lived in Texas, then Maryland, Colorado and Hawaii, and now Bangkok, getting out to experience nature in those places, and visiting the desert Southwest whenever I could.  Cooking helped with scent knowledge too, but that's a completely different story line.


On the last infusions the flavor profile thins a little but stays similar and very positive, and the longer infusion time required to draw out taste brings out more of that interesting feel effect.  None of the flavors go "off" in any way, two good signs of tea quality, brewing lots of infusions and later versions remaining positive.  This is being sold as an inexpensive, basic tea too (unbelievably reasonable, compared to similar versions), a great sign for other teas I have yet to review.

Not so much related to this tea description, the vendor made some interesting observations about types of black teas, related to processing and how those types would age:


A lot of black tea is made on Jingmai mountain. There are two main types: sun-dried and oven-dried. This one belongs to the second category and could be considered the ambassador of it.

Sun-dried black tea can age several years and somewhat improve as time goes by, however, just like Pu-erh tea, its fragrance is somewhat smothered; its power is not fully unleashed.

Oven-dried teas, on the opposite, are not made for long term storage, they are best enjoyed within a year or two. In the months that follow their production, they give you a kind of bite on the tongue that makes you want more; you end up drinking cups after cups and hardly get bored. They are easy-drinkers and can be enjoyed by any tea enthusiast: even the hardcore pu-erh tea addicts would find it entertaining.

This black tea was dried at a relatively high temperature, which gives it a lightly roasted feeling: the taste of fire a.k.a. Huo Wei 火味. It was made from standard grade natural tea garden material from Jingmai mountain and treated well in the expert hands of a Dai lady named Ye Jing Yu and her team.


That sounds about right.  There was more to this tea than it was easy to describe, a feel and overall effect that made it very enjoyable.
Posted by John B at 3:26 AM