I'll get back to that news at the end, about Cindy and her husband having a new baby, Rebecca, born a month ago now.  I've really gotta make it to Wuyishan sometime for a visit; both their girls look completely adorale.

Jip Eu shared some of a Jin Jun Mei version on that last visit there (mentioned here).  It's a tea they weren't necessarily selling, per my understanding.

That reminds me of a trend in Chinese tea shops I think I've mentioned before.  Shops tend to not offer the best teas they have around until they know that's what you are interested in.  Add in a bit of communication limit due to language issues and you'd never try anything above average in a shop (not Jip Eu in particular; I mean related to a convention in Chinese tea shops).  It contradicts the general Western retail idea of upselling, of moving on to the highest cost product that could sell.

There's an old story to go with this, to explain it, which I'll mangle a bit for passing on a short version.  A farmer owned a horse who was troublesome, not well behaved.  When someone came to him to buy a horse he didn't even offer that one as an option, even though later it turned out to be a particularly productive or fast horse (I forget that part; which it was).  It was because that person probably wasn't the right owner to appreciate that particular horse.

The parallel structure with really good tea doesn't completely hold but it still sort of works.  If you brew a really good tea wrong you won't get the most out of it, and some versions of them can relate to acquired tastes.  Really a main problem is with cost instead; low quality tea is very cheap, and medium quality tea is still not very expensive, but better tea just keeps going in terms of quality range and cost.  If a vendor offers you 100 grams of tea for $30 (1000 baht, here) and says that it's a good value because of what tea it is that's only going to seem attractive to people who already know what teas are like in that general price and quality range.

It was my impression the shop wasn't selling this tea because it was their own tea, not because most people wouldn't appreciate it.

In discussion there they daid that some versions they tend to not bring up to walk-in visitors because they have relatively little of them, so they keep them for local people who would already know to ask.  Even leaving all that aside for this particular shop it's good to set aside time to sit and drink tea with them and talk.  Even without any Chinese-culture themed tendency to start on the ordinary quality versions of teas you still need to narrow down the search to types, versions, or levels of roast.  It's a real added value when a shop is willing to let you try some teas, and help steer you towards versions that you like better.  It's part of what doesn't work for online purchasing, the part that a vendor doing "curating" to screen quality levels and trueness to type can't really help you with, without prior tasting experience to get through that.

I reviewed this Wuyi Origin Jin Jun Mei here two months ago.  It's a rough benchmark for the Jip Eu tea to stay even with since those guys produce some really nice Fujian black teas, with that style of JJM and their wild plant Lapsang Souchong standing out, to me.

The Wuyi Origin version--which I'll call Cindy's here; that's how I think of it--is a bit light.  I brewed these for a bit under 30 seconds, and the proportion isn't the typical stuffed-gaiwan amount that's standard for me for most types.  This still follows the pattern of going a bit light on the first infusion, and letting the tea get going prior to doing a more detailed review the second round.

It tastes like really good Jin Jun Mei, at least compared to the versions I've tried.  I just described the typical flavor in a conversation as between honey and roasting corn, whole ears cooking on a fire; the way that the corn sugar and browning corn silk smell as all that forms an earthy version of caramel.  This version is sweet, with lots of honey, and very bright and clean in effect.

The Jip Eu version is completely different, with some overlap (they only have a FB page for reference here; they only sell tea from a physical shop).  They'd mentioned that this version is two years old, not really intentionally aged, per my understanding, just something unique that they kept around.

It's slightly sour, but I get the impression that's the kind of aspect that could be from aging that may fade fast, that there might be less of that the next round, and not much after.  It's also sweet, with some range similar to a caramel.  Mineral fills in more than that one narrow honey and roasted corn caramel range, and one part extends out to citrus.  Per appearance it looks more like a black tea, and some of the flavor matches that, but it's not typical for any style of black tea I've ran across.  It's good, just different than the other, which I'll cover more as aspect description in the next round. 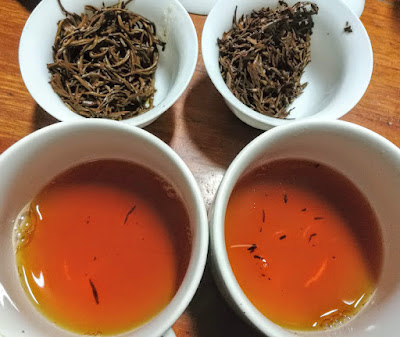 I gave these a bit over 30 seconds given how that first infusion went, longer than I would use for a higher proportion.  This time Cindy's tea version is brewed just slightly stronger than some would consider an optimum, which will be fine for this purpose, for noticing how the aspects fit together.  Next round I'll go light and for a tea like this they'll both still be quite far from being finished.

That honey and charred corn effect is still very strong, and quite pleasant.  This tea is different from all the others I've ever tried in an interesting and positive way, or I should say all her JJM versions are, as a set.  The mineral ramps up brewed a bit strong (relatively speaking; this is still exactly how some people would intentionally brew this tea, pretty close to how a standard Western infusion of black tea would tend to go).  It comes across as fullness leaning a little towards dryness, but it's still a soft but full feel tea.  The aftertaste effect is nice; it really trails on.  Although the taste range isn't broad it doesn't come across as simple, or as a narrow set.  Some mineral fills in that caramel and honey range, and the complexity hints at more going on with a rich version of dried fruit or sweeter spice, it's just hard to separate it out into distinct list form.

The Jip Eu Jin Jun Mei did clean up a lot related to that bit of sourness dropping off, as expected.  The sweetness is nice, maybe slightly less than Cindy's, but not that much less.  It might have a little more complexity than the other tea, with more of a trace of black tea mineral and very mild malt effect, now trailing into a brighter fruit tone, a hint of stone fruit.  The trace of sourness makes it harder to fully appreciate the rest of that range.  It doesn't exactly taste "off" but it's not a positive contribution. I wouldn't say that it integrates well and gives it balance, as can happen with tartness in some black teas, which I tend to generally see as a flaw or aspect I don't like instead.  I'll do more with description next round since I think the sourness will fall away further, and the rest might even develop further.  It's good like this but I think it will continue to improve. 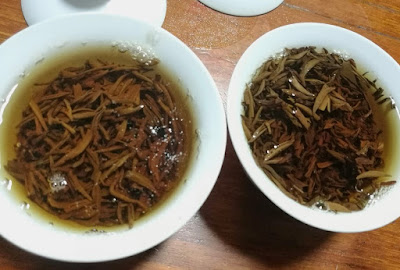 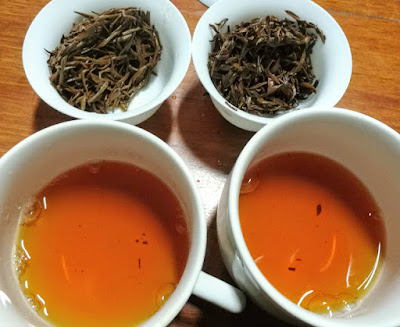 Cindy's tea has transitioned a little but it's basically the same.  The sweetness is moderating a little, with the mineral and deeper range picking up a bit.  Going with a lower proportion than I typically tend to and double the infusion times I often use will cause these to transition and fade a lot faster (of course), and to make it through less rounds.  I was surprised that a recent version of a golden needle tasted a lot like actual bees' wax, along with honey, and there's a little of that to this tea as well, it just doesn't stand out quite as much.  Once you think of it that flavor range resembles it a lot more; funny how the interpretation part goes.

The Jip Eu version is the best it's been; that sourness is pretty much gone.  The flavor and overall aspects do overlap with Cindy's version.  There's plenty of honey sweetness to this as well, and some of the same deeper mineral tone is also present.  This adds more of a black-tea range mineral base, I suppose also related to a mild form of malt.  The citrus I noticed earlier never did ramp up; it probably stood out more in the first two rounds, but was masked a bit by that trace of sourness.  This would seem like a much more refined tea if not being compared to that other really exceptional version; even given that it holds its own; it's just different more than inferior.


We're off to to an outing so I'll give this another 45 second soak and fill in a few comments and finish.  Cindy's version is fading; four long infusions is a good bit for a black tea, even if buds-prevalent versions do last longer.  It will probably still be possible to stretch infusion times more and get a few of extra rounds out of this tea but it'll narrow further in aspect range.  It's still very nice, more where a moderate quality version might have been the whole time, with that intensity dialed down a bit.  Preparing this tea at a higher proportion using longer times it would've been at this same stage after 6 or 7 infusions.

The Jip Eu version is still nice, holding in there.  It had covered a slightly broader range for aspect set so narrowing impacts it a little less.  A little of an "old furniture" flavor picks up some; that can be the kind of thing that drops out over the first few rounds too, but in this case it's showing up a little more as the other range thins.  That's not necessarily a bad thing.  That aspect tends to also come across as a perfume-like quality, or to be vaguely related to flavor range in a liquor or brandy like congnac.

It's interesting switching back over to the Wuyi Origin version after tasting the Jip Eu tea; it still tastes really sweet, heavy on that honey / bees' wax / caramel range.  That aspect has faded quite a bit compared to the earlier off-the-scale intensity but it's still the main range.  Both teas were really nice, both just different, but both better than I'd expect typically encountered JJM versions to be.  I suppose I did like the Wuyi Origin version a little better but maybe comparing both as relatively fresh versions might have been more even.

About the new baby

There isn't a lot more to say, but I will pass on a few photos.  I would have mentioned her a long time ago but there's a Chinese custom about holding off on announcements until a new baby is one month old.  And then they cut the baby's hair as some sort of ritual observation; different.  I could add that Rebecca looks like a doll baby, so sweet and cute, but that comes across in the pictures. 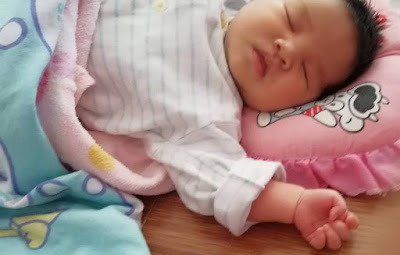 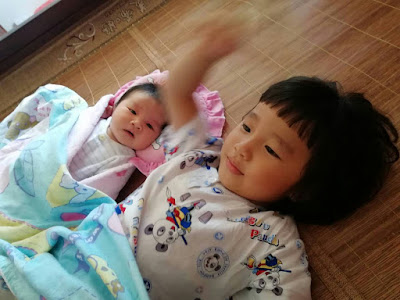 More recent photos of my own munchkins: 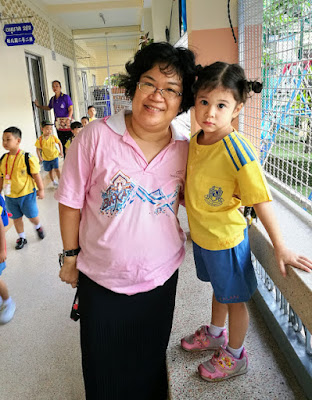