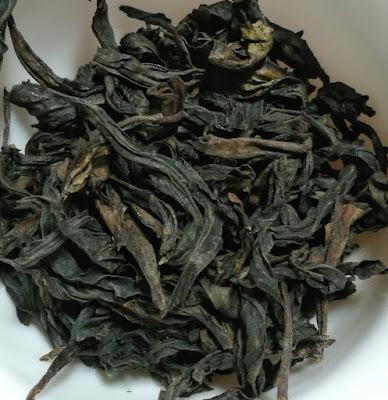 I've not been buying as much tea as I'd like this year (ever, really), ordering some online but sticking to picking up a little here and there to supplement trying more tea than ever sent as samples.  All that is a long story that I'll skip telling, but it ties in here.

Cindy Chen of Wuyi Origin sent some of my favorite tea to drink, more to share it than for review coverage, really.  How do I know that?  It would've been easy to send a small amount of a half dozen versions instead, and of course I'd have written about most of them or all of them, since their teas are among the most interesting I get around to trying.  She didn't do that; she just sent a good bit more than just a sample size of my favorite, this fruity style of Rou Gui.

I'll be clear about personal bias related to this tea source; beyond her sending teas to try I consider her a friend, even though we've never met.  I'm not impartial.  I'd like to think that doesn't change the tea aspects I experience and write tasting notes about but who knows, really.  We kind of experience what we expect to and want to experience, to some degree, don't we?  There was a test awhile back related to people trying white wine colored to match red wine appearance with subjects evaluating the flavor as if it were red wine, reporting that separate aspect description range:


The research, later published in the journal Brain and Language, is now widely used to show why wine tasting is total BS. But more than that, the study says something fascinating about how we perceive the world around us: that visual cues can effectively override our senses of taste and smell (which are, of course, pretty much the same thing.)


I'm saying it might work to extend that, that maybe we don't just experience taste affected by visual cues but that maybe different levels of expectations could factor in.  That "wine tasting is BS" part is surely an oversimplification; I'm guessing that trained professional tasters would be able to tell you that the wine tasted like white wine, that something seemed wrong with the test.

Tasting sensation isn't so simple that a machine could do exactly the same thing we do (although I did just write about to what extent machines can taste and describe teas now).  Related to the part about my impression being positively biased, and adjusting for that, it can help to read multiple reviews of the same tea (this Rou Gui) to read across different impressions, which is easiest to do using Steepster, the main tea review site.  One of the reviews (of last year's version) captures how flavor aspect descriptions really don't do the tea justice:

I think this is an art piece from a Rou Gui that combines an excellent ground, beautiful leaves and a careful baking process. The perfect combination between nature and human creativity.


Another review captures the same idea and places the tea related to others:

Multiple roastings combined with well-sourced leaves make for a complex and well structured tea...  I’ve had only a few teas like this, but for a much higher price, so I definitely intend on grabbing another bag of this one.


There are other great versions of Wuyi Yancha produced and sold, with tea quality coming in levels.  A version related to this tea did win a Wuyishan competition a couple years ago, so I guess that relates to another form of moving towards objectivity.

About that value issue mentioned, this lists for $58 for 75 grams ($38 for 50, divided out, since that quantity rate is more familiar).  There are plenty of versions out there selling for half that, but this is probably still be a very good value for what it is, only potentially available since it's sold directly by the producer.  I'll also mention their website description here before the review:

Roasting level : Medium Roasting (4 times charcoal fire roasting ) complete tea leaves, uniform looking, a superb workmanship, a unique mountain field, careful -Charcoal baking techniques . The cinnamon of this garden has been a favorite of my family tea guests year after year. The taste of tea is quite rich. In addition to the cinnamon taste of cinnamon itself, you can feel the very obvious taste of fruit. It is sweet and delicate. The taste of tea soup is mellow and smooth, the endurance is lasting, the lips and teeth are fragrant, and the Yanyun （岩韵） is very obvious.


That location sounds familiar, translating to "horse head rock," a famous area inside the park there.  It was funny that if you put that in the Google online translator to check it they transliterate it to ma tou yan, not so helpful, but the Yandex version confirmed the meaning. 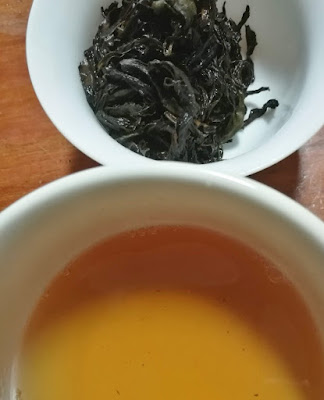 Per typical process I went light on the first infusion, as kind of an introduction to the tea, to let it get started.  Some people would rinse most teas but I don't, only fermented versions, sheng, shou, Liu Bao, and other hei cha.

The dry tea scent was interesting, complex, with a bit of roast coming across, but after brewing really complex aromas emerged, even before tasting.  This will have some fruit to it.

It's brewed fast, so light, but it's really intense as it is.  The balance is perfect; plenty of fruit, peach along with citrus, but with enough warm, sweet aspects that lightly carmelized toffee and toasted almonds stand out.  This is fantastic tea.  I suppose if someone didn't like fruit aspects in Wuyi Yancha it might not even seem good, and I have heard someone mention that fruity oolongs seem too much like hot fruit punch to them.  Our preferences definitely vary on that point; fruit aspects in roasted oolongs are my favorite across the range of all teas.  I guess they couldn't appreciate lot of Dan Cong either; kind of strange to even consider that. 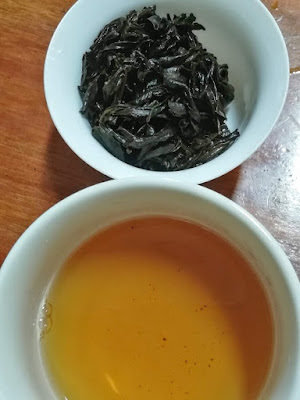 Having opened up the tea is even more intense on the next round.  Again I used a very moderate infusion time, around 10 seconds, with tons of flavor emerging in that infusion time.  The fruit is in the same range, ripe peach with citrus, maybe in between tangerine and tangerine peel.  It's the balance of flavors and overall complexity that makes it special though, not any one or two components.  Roast level is moderate but enough to draw out warm aspects to support the brighter, sweeter fruit.  There's nothing to it I would label as ''char."  Warmth might have picked up a little, with roasted almond flavor edging into a more roasted range, not quite getting to that more char-like character that's a part of roasted chestnuts.

A lot of mineral serves as a base, hard to isolate as tasting like any one thing, but complex and intense, providing a foundation for the rest of the experience.  For feel the tea isn't really thick or thin, in the middle, with aftertaste standing out more.  The fruit and mineral range trails off after you drink it, very pronounced as oolongs go (not so much for Taiwanese high mountain oolongs, but that mineral aspect type is completely different).


People sometimes ask what my favorite tea type is and I can honestly say I appreciate lots of different teas for lots of different reasons.  I once considered Wuyi Yancha as a favorite overall type but others have drawn even.  If I had to pick just one tea that's a favorite out of everything I ever tried it would be this one.  It's much better than almost any other Wuyi Yancha versions that I've tried, which is part of it, but really it's probably more about that style clicking with me.

I can see why people might be more accustomed to earthy, mineral intensive, and subtle aromatic variations of Wuyi Yancha instead of this fruity range, maybe associating fruit more with Dan Cong (or other floral range; those cover both), but I expect not having a related preference could tie to just never trying a version on this level.  I'd put different range of Wuyi Yancha as a close second, more subtle and aromatic Qi Dan, probably with that tied with good versions of Ya Shi / duck shit Dan Cong.  For any of those if you try a version that's as good or better than any other you've had during and just after that tasting experience each might naturally seem a favorite overall type. 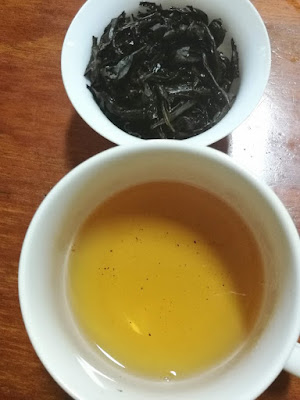 I went a little longer on this next round, a bit over 10 seconds, more to see how that changes it than to optimize it.  Fast infusions would probably be best, between 5 and 10 seconds, not to limit astringency or any negative factor, but just related to tastes coming out better in teas brewed lighter once you adjust to that.  The mineral picks up; the fruit is still pronounced but the warmer, earthier tones seem more pronounced brewed stronger (still light, as some people would tend to brew most teas Western style; it's all relative).  The bright tangerine range citrus edges more into dried peel range, versus fresh fruit and zest, and the ripe peach expresses a little more edge related to peach skin.  Of course it's still quite sweet.  This is far from astringent, or challenging in any way, but complex in a different sense.  I think most of that minor character change relates to being perpared slightly stronger this round but the tea would naturally transition over infusions.  I'll go back to really light next round to sort out which input was which.

Even brewed lightly the warmth had been picking up.  If someone hasn't experienced this sort of combination of peach, citrus, warm toffee, and underlying mineral it's hard to describe how it balances, why it all works so well together.  It occurs to me I was missing the most obvious warm spice-related aspect present, which serves as a base for the brighter, more forward flavors:  cinnamon.  That's what "Rou Gui" translates as, the literal meaning, and that's typically the most dominant flavor in this oolong type.  I tend to think of cinnamon as the warm, sweet, mild spice we use in apple pie in the US, which is lighter, not so far from cocoa in character (it just tastes different), but this is much different.  My favorite local shop owner says this cinnamon, which is more intense, mineral related, and slightly "darker," is similar to a version of cinnamon from Vietnam.  I've went through that tangent plenty of times though; cinnamon is really one thing, the "true" version, and then related cassia plant types barks it's something else, but those are also sold as cinnamon.  To be honest I'm not sure which version this aspect is closest to across all those potential plant types.


Enough messing around; I'll give this around 15 seconds infusion time to try to optimize it, and probably after another infusion at around that length of time it'll be time to extend those times a little.  Some of the brightest fruit has faded some and the cinnamon spice and mineral has picked up; it's still great, just different.  The feel is still just medium, not thin and not overly thick, with a nice extended aftertaste, just dropping a little in intensity and duration.  Citrus still stands out as the main fruit range at this point, mostly a sweet version of dried tangerine peel, which balances with the warm tones really well. 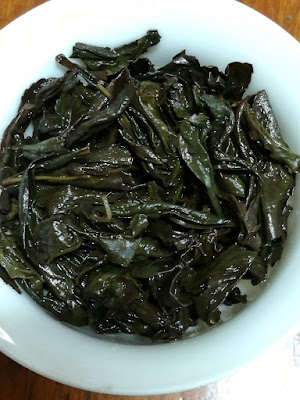 I have no further conclusion to add; the tea is amazing, with that description definitely not doing it justice.  It prompted me to try another version of Wuyi Yancha I'd been meaning to get to, and maybe a comparative description of the range of styles within that type in that review can help place it.