I tried another sample of tea my favorite source in Vietnam sent, from Hatvala, a Three Moons oolong.  I tasted it and wrote notes prior to seeing any description, but I'll share a description that they posted online here first (in their sales related page; this is their main information site):


Three Moons Oolong is a lightly oxidised green Oolong Tea that has been lightly roasted many times over a three month period to simulate the style of an aged tea.  Produced from leaves harvested from the Quingxin cultivar as a standard pluck of one bud and up to three leaves the tea is sun withered, shaken and then oxidised to approximately 30%.

After a repeated rolling and drying cycle the tea undergoes and extended period of roasting where it is gently heated for an hour and then allowed to rest.  The roast and rest is repeated mulitple times over a period of three months, or three moons!

Three Moons has a light toasted aroma reminiscent of roasted green beans but with its flavour is a surprising contrast with notes of sweet apple or melon.


As usual I didn't notice any apple or melon in that write-up, kind of how flavors interpretation tends to go, but the rest sounds exactly as one would expect from this in my notes.  The effect of the roasting really stood out.  The tea was nice, as described in the review that follows, which I won't adjust related to that vendor description.  That cultivar might sound familiar; it's the main traditional oolong source plant type produced in Taiwan (one that gets transliterated in different ways).

I've recently ran across an interview post that fills in a lot of background about Hatvala and local tea production in Vietnam, in this article.  It goes into their origin story, touches on sustainability issues, and local tea culture; all interesting stuff.  On to that review then.


It's pretty close to a Dong Ding style medium roasted Taiwanese oolong, so much so that the review is going to be about comparing it to others of that type.

The roast level is moderate but bumped up enough from the lightest styles of rolled oolongs that the toastiness comes across first.  It's hard to say if it's on the lighter side of medium roasted or not, since that would depend on expectations.  I tend to experience the comparison part first (how the tea relates to expectations, if it's like a known type), then a detailed description of individual aspects after, per mental processing, but switching that order may be easier to read. 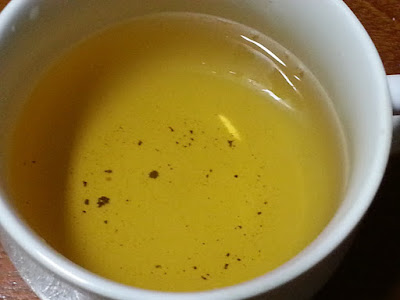 The flavor range emphasizes the roasted effect.  It comes out a bit like toasted almond, although different people would interpret that in different ways.  If someone was thinking spice or even wood it's not so far off those, or a range for both might overlap.  To me toasted almond catches at least half of what's going on for flavor description.   Mineral underlies that, and it trails into warm spice, or even cocoa, but it's not distinct enough to pick out.  It has some floral range to it, but that gets mixed in with other complexity, and could get missed for focusing on the other aspects.

The main distinction seems to be how it relates to other comparable teas.  I just drank some of a pretty good version of a roasted oolong from Taiwan yesterday, as chance has it (reviewed here; I still have some left), and compared from memory it to another similar version that wasn't quite as good from earlier in the year.  This probably gives up a little for richness, mainly for feel effect, related to that Taiwanese tea,(the better one), but it's on par with that second tea that I bought in NYC.

It may give up just a little related to fullness of taste experience but the main difference relates to feel; it's not thin but not as thick as that tea.  Better Taiwanese oolongs have a nice mineral aspect that grounds the taste experience, and seems to come across on different levels, and that's limited in this tea version.

This would probably be the best oolong I've ever tried from Thailand, if it was from here, to put that judgment in perspective (or maybe only tied with one Oriental Beauty style version I liked, probably as much related to me loving OB in general).  It's quite good tea, it just falls short of being great within some limited aspect range.  It's almost splitting hairs to point that out as a flaw but it seems a fair comparison to me, since it's made in that style.  I've tried Thai tea that attempted to be made in a similar style, medium roasted, but nothing that achieved this degree of success.


On the next infusion the richness of flavor picked up, and to a limited extent the feel thickened.  The balance of that toasted aspect works well, a roasted nut aspect, general warmth, complexity, with background mineral and floral aspects.  Mineral grounds the experience and floral is more top end but the roast related flavors really stand out.


It's not the kind of tea you would drink and wish it were better; there's lots to appreciate.  It's not uncommon for that roast effect to go just a little far or for murky aspects to creep in, for the taste range to drift a little to cardboard or wood, but these flavors are clean in effect and well balanced.  It prepared a number of very pleasant infusions, only losing appeal later once longer infusions were required to draw out the same infusion strength since the balance of aspects didn't work as well then, with the roasted effect strengthening in proportion to the lighter and sweeter elements.


I'm reminded of a couple of recent tangents that relate. One was about mixing descriptions of different tea processing inputs.  How does oxidation level affect this tea character versus a roasting step; is it more oxidized in addition to being more roasted?  I'm not really sure; could be.  I've read the description since and it says oxidized to "30%," but I'm still not clear on how that relates to the other light oolongs I've been running across.  Maybe those are less oxidized yet?

A general article dispelling tea myths mentioned a brewing preparation variable that relates (that article, Five Tea Myths That Need to Disappear, in Serious Eats):  preparing this at slightly different temperatures would change its character.  Somewhere around 90 C would be standard for this type, I would think, as much as there is one consistent approach used, but others would go with full boiling point instead, or maybe even slightly cooler.  To me it works best to prepare teas in slightly different ways and see what suits personal preference best.  People do tend to discuss optimums as if there is one best way but that doesn't match my understanding, that preferences can vary.  Here is some of the input from that article on the same point:


Here's a good rule of thumb: the hotter you brew, the darker and more robust your tea will be; the cooler your water, the sweeter and more mild it'll taste. You can brew any tea with this in mind, see what tastes best to your palate, and adjust your brew parameters accordingly. A white tea or lightly oxidized oolong, for instance, will make two different brews at 175° and 205°. If it's a good tea, both brews should good; which you prefer is up to you. For what it's worth, I tend to start brewing a new tea with boiling water and dial it down from there if I need to. The same holds true if I'm brewing an herbal tea.


That could hardly be wrong, since the advice is to try different things and see what you like.  Some of the rest of that article tends to take more of stand, with the only problem relating to not really always clarifying which parts are opinion and which parts are conventional wisdom (as close as tea knowledge tends to get to being facts).  Another example, related to brewing:


A Chinese dancong oolong, on the other hand, is best brewed with a ton of leaves in a tiny pot, with a series of flash steepings of just a few seconds each.


That is as much a standard take as there is one for brewing Dan Congs, only leaving out the parts about that process drawing out plenty of flavor but minimizing related astringency (in the cases where a Dan Cong has that as an aspect).  Per my understanding that approach would typically involve using boiling point water or water near that temperature range.  Again it is possible to offset the astringency another way, to drop that temperature instead, and use cooler water and longer infusion times, still at a very high proportion, so in the infusion duration range of 15 to 30 seconds instead.  Or maybe someone would prefer different techniques depending on the character of the Dan Cong; it's not as if all the types and individual versions are similar.  All of this just came up in a review post comparing two dissimilar Dan Cong versions from the same producer about a week ago.


The tea was great.  My preferences for tea types keeps shifting and this isn't the main page I'm on right now but it's a good version of a medium roasted oolong, and those aren't as common to come across as decent lighter versions (perhaps "greener," with limited roast).  Factoring in value this tea is absolutely amazing.  It costs about one half of a low guess of what you might expect, and one fourth what the relatively identical Taiwanese version I bought in NYC cost.  Of course it's not really a fair comparison, given the difference in supplier overhead (shop type and location), and sourcing on the opposite side of the world instead of relatively directly.

I didn't really notice the simulated age effect.  Aged rolled oolongs tend to pick up a plumy or raisin / fig like aspect and this didn't have that.  That roasted almond aspect was pleasant but hard to place, related to other comparable teas.  It's normal enough in one type of Dan Cong (the one named as "almond aroma," alternately referred to as Xin Ren or Xing Ren Xiang, one of which is probably more correct).  It can come up in roasted Wuyi Yancha too, although I've lost track of which one included something like that in the past half a year or so.  Instead of leaning towards fruit to me it included floral tones as a secondary aspect, beyond that.

Brewing variations can shift flavor profile quite a bit (see that related part of this post), so I wouldn't be surprised if the variance in the descriptions factors in partly related to that, if you couldn't draw more fruit out preparing it different ways.  This tea would work well brewed Western style (not how I made it), and aspects tend to shift a bit related to using a different proportion and longer infusion time.  A tea like this is especially nice because you aren't "brewing around" any negative aspects, trying to reduce astringency, for example, instead shifting factors to see how you like it best.  It can almost be like drinking slightly different teas, in examples where a tea version changes quite a bit, but you sort of need to brew it different ways to see how that plays out.