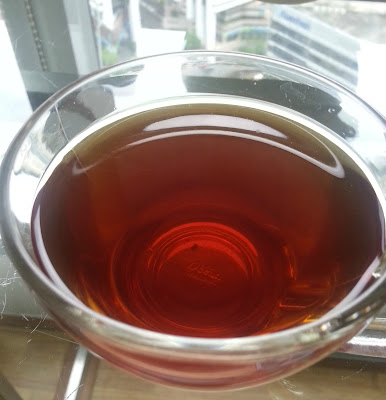 I'm finally reviewing a Ceylon (Sri Lanka black tea) sample from that Bangkok tea expo awhile back, from the SNSS vendor.  They are really a wholesale seller, with more about all that in this post.

It's a bit odd reviewing a tea as "Ceylon," not considering more about sub-region or plantation, similar to reviewing something as a Chinese black tea or Taiwanese oolong; not so descriptive.  It was labeled as OP 1, per my understanding meaning that the leaves aren't very broken.  The vendor knows where it came from, a plantation source, it just wasn't passed on along with that information.

SNSS isn't really a retail sales vendor, and I sort of picked up a sample in passing at the event.  They weren't set up with lots of retail portions there but in retrospect I probably should have pressed to get a bit more tea, not squeezing them for more samples--full disclosure:  they didn't charge me for this--but just to have more to drink.

The tea is probably going to be what I expected, like decent Ceylon, a bit malty, with some astringency but still moderate related to that, etc., so to mix it up I will try it with and without milk.  I don't remember the last time that I tried adding milk to any plain tea (eg. not masala chai), so that will be different for me. 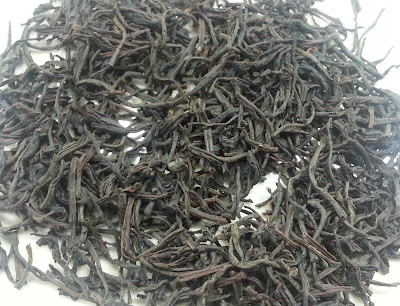 
The tea is nice, malty, with a touch of astringency but not too much, with a bit of mineral below that, as expected.  That mineral is the interesting part, hard to pin down.  Another blogger once said Ceylon tastes like blood to her (Amanda of My Thoughts are Like Butterflies, a cool blog), and that might work for a start, but in a nice sense (not how she was using that description).

I would probably just say "mineral" instead, and not get into rocks or bodily fluids for comparison.

A discussion came up about Chinese black teas seeming astringent recently (and malty too), and this tea isn't overly astringent.  Normally it wouldn't cross my mind to add milk or anything else to it.  The sweetness and balance is nice.

Beyond malt, a trace of astringency,  and some mineral there are mild earthy tones adding complexity,  it's just hard defining them since they really don't stand out.  Maybe it's also a touch woody, like cedar or redwood.  That mineral reminds me a little of a struck match too, maybe more so than any kind of rock.  It's odd that I'm saying that the aspects are nice but these specific descriptions don't sound positive.  As much as a tea tasting like blood, a struck match, and a humidor could taste nice this really does; the balance works well, it's clean in effect, with a good level of sweetness.


On the next infusion I tasted the tea before adulterating it with milk. The mineral taste was a little stronger but otherwise it was the same.  Then I put milk in it. 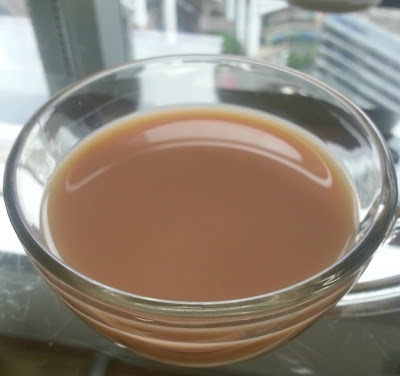 It tastes like black tea with milk added; a lot less distinct in character.  Maybe I can tell this isn't Lipton but part of that may relate to already knowing that it's not.  It's hard to pick out anything but "black tea with milk."  It's definitely not astringent, but then it wasn't before.  I might as well add sugar at this point but I won't.  I was thinking that I might still be able to detect some of the character, the flavor, in spite of diluting it, but not so much.  It would probably be better brewed stronger than I drink plain teas, and more astringency in the aspects profile might work better, since this might be a bit too soft with the milk added.


That was pointless.  I could swear that I tried relatively decent black tea with milk some years back and liked it better then, but who knows.  That could relate to preference shift, using a different tea, or just bad memory.  I brewed this tea a third time and the results weren't as good as the first two, a bit woody for stretching the infusion time to maintain the infusion strength (using Western parameters), so all typical enough.


I should have more of this tea to keep drinking it.  I liked it better than any green tea I've been trying (my least favorite type), to put it on a scale, but it doesn't match my preferences as well as most Chinese or Taiwanese black teas.  For novelty I'd probably enjoy some more than mid-grade Chinese tea types that match my preference for type better, I just wouldn't want to drink a lot of it.  I could really enjoy 50 grams for trying something different, but 100 would probably stick around awhile, and if I had 200 I'd probably end up giving some away.  I guess it could work well as a breakfast tea, so maybe not.  It's the right aspects range for that time of day, and it's nice having teas that aren't challenging for then, something I don't really feel a need to gongfu brew and focus on for an hour.  Apparently I'm not so into black tea with milk, so maybe I'd stick to drinking it plain instead.


These guys are local but since they're set up for wholesale vending in order to run across more I'll have to arrange to meet them instead of drifting into a shop somewhere.  They import the tea themselves, so there is more information about the sources available.  They bought this directly from a plantation, per my understanding.


I've tried silver tips and gold tips from them too, so they also do carry some more interesting teas, but they do more with supplying local shops with more standard versions.  It works out to be a relatively unique option here since I only know of one other vendor selling better Ceylon in Bangkok, and at a guess they would probably sell a tea that is nearly identical to this one for a lot more.  But then that's how sales from different types of suppliers tends to go.