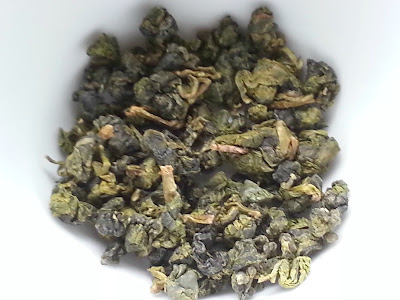 I wanted to pass on an impression of a Thai Royal Project Jin Xuan that I mostly bought for staff in my office to drink. This was one of the teas I started out on, along with light oolong made from the #17 hybrid from Taiwan (Bai Lu, although it's often incorrectly referenced as Ruan Zhi).  I like the tea, so part of the point is explaining why I keep saying Taiwanese versions are better, both to defend Thai teas and also put that in proper context.


The main reason I say that:  better versions from Taiwan are better, a whole level above this one.  That generalization is based on years of trying every Thai oolong I could find, from all different types of producers and from different types of end sources.  But there aren't that many Thai tea growers, per my understanding, and there are an even more limited number of central tea processors, which is why the oolongs seem so consistent.  I'll skip ahead to reviewing in detail and add more about that origin and general quality level comparison there. 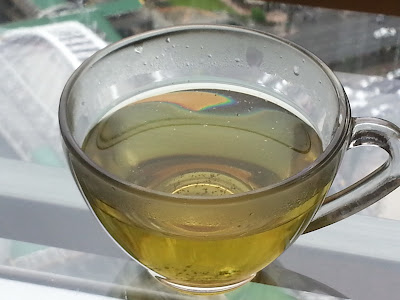 
The tea is bright in character, sweet and fresh, floral and a little vegetal.  I'm brewing it Gongfu style in a gaiwan this time and I could swear it turned out a little better prepared Western style in the past week, just a little brighter.  It's a bit creamy, in feel and in a butteriness coming across, but all that range can be more pronounced than it is in this version.

There is a characteristic taste of Taiwanese oolongs that comes across, although that was much more pronounced and positive in this other oolong version from there, a Shan Lin Xi version from the Lin Hua Tai shop in Taipei.  I guess to put labels to it the flavor range is a combination of mineral undertone, floral higher end, and a touch of different brighter mineral tone, all combined with good sweetness.  A typical feel for Taiwanese oolongs is a bit full, with lingering aftertaste also normal enough.


Some light oolongs express even more pronounced floral aspects, with this one extending a moderate degree of that into other vegetable range, not far from fresh green bean (uncooked).  The sweetness is almost like that in very fresh snap peas or green peas, which are nothing at all like a frozen version.  That better earlier session version seemed to emphasize flowers more.  I might have backed off the water temperature just a little then; sometimes I do that, but I'm brewing it this time using just below boiling point water.  Or maybe I just liked that overall effect better; usually Gongfu brewing works out the same or better but not always.  At a guess it was the effect of those things together; backing off water temperature works better, and the lower proportion and longer brewing time also did. 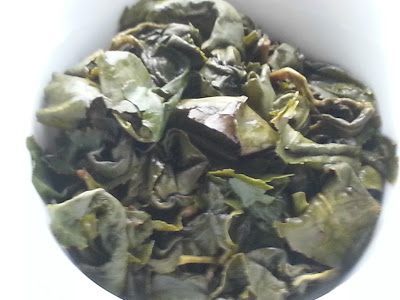 So that was it; basic stuff as reviews go.  It was nice but it could have been a little brighter, a little more floral, a little creamier, or could have expressed a bit more mineral tone.  The level of sweetness was fine, and the flavors were quite clean in effect.  I didn't notice pronounced aftertaste, and the feel wasn't particularly full, but it wasn't thin in effect either.  This is all how Thai oolongs tend to go.  They start to express some nice attributes but then you realize you've had Taiwanese versions in a relatively identical style that expressed them much better.  Part of that could relate to the hearsay-based idea that the best Thai oolongs are shipped to Taiwan to be sold as "counterfeit" teas from there.  Given that I've tried so many versions from so many sources it's hard for me to imagine there is another whole quality level out there that I didn't get to but I suppose it's conceivable.


To me they are a great beginner's tea, or could work as a nice, inexpensive daily drinker.  I just had that tea with lunch, with duck noodle soup, and it works better with something lighter and less earthy, maybe with a pastry, or with apple pie and ice cream, or even with a ham and cheese sandwich.  As for pairing with Thai foods it would be fine with anything that's not too spicy or not too far in any other direction for strong flavor, like herb and garlic roasted fish.  For spicy food something like sweetened bael fruit "tea" (tisane infusion) might be better, or really water pairs better with any kinds of foods than it's often given credit for.

It would work really well as a blending tea, but blending makes more sense with black teas, to me (adding flowers, or mixing a tea with spices, making masala chai and such).  This tea cost 100 baht, around $3, for 100 grams, so not very much at all.  I've seen closely related versions (or maybe this one) selling in online Western vending outlets for around double that. That's typical for here though, although sometimes other versions can cost somewhere around 350 baht for 200 grams (around $10), or still not much at all.  #17 / Bai Lu isn't so different from this but the character does vary just a little, usually lighter on the creaminess, with a bit more influence in a mild earthiness leaning towards a spice aspect.  It's probably better than it sounds; I don't mean it tastes like actual earth, or "forest floor," or cork, it's just a little warmer, with spice range moving towards nutmeg that typically stays non-distinct.


There are Royal Project stores in different places here; this was from one in the Future Park mall, way on the North side of town, almost up to Ayutayah.  They sell different versions of Royal Project oolongs and other teas though, and this version is the one I've liked the best, the one that comes either in octagonal shaped boxes (see an image of those) or red or gold foil packaging.  I've seen shops selling this version in both the main Bangkok airport (Suvarnibhumi; good luck finding it though, over by domestic departures), and in the Chiang Mai airport, and in the Central Embassy grocery store, but it's also sold in lots of places.  I can't remember if the Royal Project store in the Paradise Park mall had it (I think it didn't) but there are two other tea shops there that would carry something similar enough.


You would think there would be a website related to this, a central Royal Project version, but I didn't find it.  That's probably related to using English to search, and to there not seeming to be one singular Royal Project, there are multiple initiatives.  Here is one version though.  I did also find another nice review of a similar or perhaps identical tea by the Tea Squirrel blog.


One might wonder, why review it here at all, only to say that it's a mediocre tea that's not on the same level as the other few dozen teas that I've reviewed this year.  Partly because I don't think I have reviewed one exactly like it, and it's a basic staple here in Thailand.  I did review a similarly sourced Royal Project black tea not so long ago, tied to the same general idea, describing the local teas landscape, what an ordinary quality level Thai tea is like.  There are some better examples of black teas and oolongs out there; they're just not so easy to come by.  I've had the best luck with Tea Side as a source, an online vendor.  Winter harvest versions of oolong tend to work well for my individual preference, warmer and a shorter step closer towards a spice aspect.  Jin Xuan based black teas can be very nice, or they can be not so good, it just depends.


I had all but put this general type aside by the time I started this blog, but seeing them in a grocery store was part of my own introduction to decent loose tea years back.  Part of mentioning them again relates to recently writing an article for an expat site / forum on where to buy tea in Bangkok, and to a lesser extent Thailand in general, which I was thinking of sharing here.  It would make sense to describe this tea first related to that, to set the general range for local basics.  I could link to where that is already posted but they edited down the details of mentioning most specific locations, which would be helpful to readers here, and without that there isn't nearly as much point.  Shops here are like anywhere else, they come in a range of different types, but it works best to describe those general types related to specific incarnations.


The tea is ok; I'll probably drink it once a week until the staff here gets around to finishing it.
Posted by John B at 9:30 PM