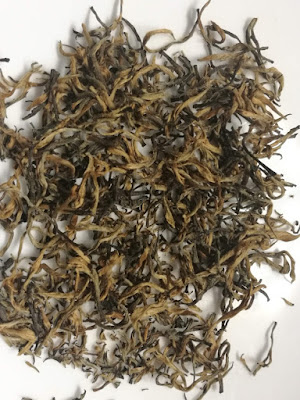 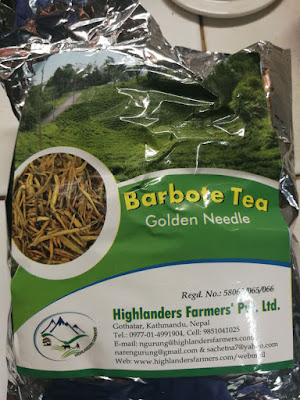 This is part of set of teas that Narendra sent, the Nepal tea producer who started small scale production (with background covered here).  They had already made a nice white tea version and black tea that I've reviewed, with limited additional background on a Facebook business page.

The short version is that they make nice Nepalese distinctively local origin teas.  Adding just a little to that, Narendra's vision is to get develop the capability for small, local growers to produce tea through a co-op style initiative, versus routing production and sales through a larger central factory system.  More value is added at the local level, and more of the final return stays there too, benefiting farmers (ideally).  The better the tea is the better that will work.  That's why they've made a running start on producing exceptional tea, along with getting the right help and using the right equipment as inputs.

To be clear I'm judging this tea against all other Nepalese teas I've tried, and against a standard of teas from everywhere else.  It's still pretty good.  "Curving" that some for being a new development it's still better than one would expect it could be, by a good bit.  The tasting description fills in details related to that. 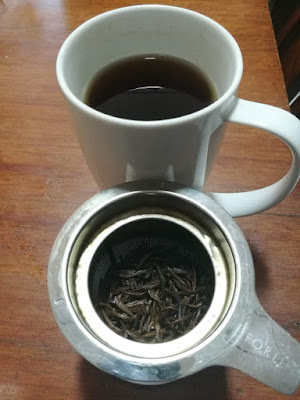 The first thing that hits me is honey.  It's a warm, rich, version of it, the way that bees' wax smells.  I'm brewing this using a modified Western style, designed for making three infusions, or possibly even four, with this first one on the light side.  I brewed it at slightly over a standard Western proportion but only for between 2 1/2 and 3 minutes (without timing that; my versions of these descriptions are never set up as brewing instructions guidance).

I'm partly on break today for this being a holiday and I've already met Somnuc this morning (dropping off tea as part of a tea swap, but I only caught him on the way through a local airport link station), and need to get around to playing with Keoni.  He's the Laos guy who passed on some interesting Laos and Vietnamese tea versions he's turned up while traveling.


This reminds me more of one of Cindy's Jin Jun Mei than I would've expected.  I reviewed three of awhile back; I'd have to check and see which one (probably similar to the "honey aspect" version I reviewed this year, with their listing for that here).  Those teas essentially are golden bud-based versions, just much different than other similar themed teas from other places in China.  This one is not all that far off that aspect range at all; kind of strange.

I'm not claiming that this tea is as good as their Jin Jun Mei, to be clear.  Those teas stand out from the range of everything else I've ever tried, not a fair bench-mark for anything from anywhere else for being too refined and exceptional.  They're just better instead of only being different, in some objective sense.  Sharing some aspect range is a great start though.

Brewed light like this the body will be on the full side but it will probably pick up a drier, more structured feel brewed just a little heavier.  It already lingers related to aftertaste effect after drinking it, a good bit as black teas go, even brewed lightly.

I feel like I'm not getting far with flavor description, and this Western style approach doesn't allow for catching that over the next few rounds as Gongfu brewing does.  It's pleasant but still a little subtle, with a rich feel even brewed lightly, but that lower intensity level makes splitting flavors out trickier.  It tastes a little like Jin Jun Mei, but that reference only works for people familiar with that.

Beyond the bees' wax and medium-dark honey a very mild form of malt fills in a deeper base, like a sweet version of grain, or exactly that, a version slightly fermented to change complex starches to sugars.  Mineral accounts for some of the structure but it's hard to identify beyond all that other complexity; it fades into the background.  I've been drinking so many SE Asian sheng lately that the mineral seems really light in this in comparison, but then the whole profile is different.

It's a normal weakness of such teas to be "off" just a little, to be woody, or include a touch of sourness, or in between the two along the lines of balsa wood, but this is really clean-flavored instead.  I'll go longer on the next infusion and describe it prepared that way.  This kind of tea still can transition some through rounds but maybe not as much as some other types; it's my impression that shifting intensity changes its character more than round-by-round transitions.  It would work just as well brewed Gongfu style but per my past experience it doesn't make all that much difference for this tea type.

I brewed the second round over three minutes but it didn't change character much.  It might've picked up just a little edge, a bit of extra mineral with the malt changing form just a little, but a soft one.  It goes without saying but I meant "malt" in the sense of ovaltine or malted milk balls versus Assam; a soft, complex, sweet-grain flavor versus an edgier, mineral intensive, feel-structure coupled flavor aspect.

I forgot to mention one factor that enables change in this tea (and others, but in particular in this one):  temperature.  I was using water just off boiling point from a hot water dispenser but didn't pre-heat that infusion device (a basket-style For Life cup with lid).  That ceramic cup would pull out a significant amount of heat.  Often using water a bit off of full boiling point temperature for black tea might be a good thing; it doesn't necessarily need it to draw out the same range of flavor and feel-structure.  It just depends though; using the hottest water possible will just add a bit of edge to the tea, which for some would be essential, and for others not desirable.

In Gongfu brewing circles people often make the claim that not using full boiling point water with a lot of teas robs them of achieving their potential, but then those people are able to use infusion times of between 5 and 10 seconds to moderate some aspects that aren't positive at some infusion strengths.  And preference can develop to what you are used to, or to what you expect to like, and for them boiling point water with high proportion and very short infusions is gospel for brewing process.  Some even brew green teas like that, which seems a bit extreme.  But then expectations and preference do set the precedence, not objective best practices.

The flavor list from those first two rounds is nice:  tastes like JJM, bees wax, medium dark honey, light malt for structure, and some mineral.  It might make sense to interpret some of this as a warm type of floral, sunflower or something such.  The sweetness could come across as toffee instead; that would also account for some of that warm tone.

The complexity isn't bad, just limited.  This type of tea just isn't about that, just as it's also not about feel-structure, an astringency edge.  On the positive side it has a rich, clean, reasonably broad flavor profile (just complex within a narrow range), that partly matches some teas that are in high demand.  And it's easy to brew, probably hard to screw up, with that softness letting you focus on getting the best flavor balance without astringency as a concern or negative factor.

It's good enough tea that I'd expect tea enthusiasts to love it; it's not as if it's limited in the sense of quality, or lack of depth.  The limitation is the range it expresses for aspects; it only covers the ground that it does.  Drawing more of a feel-related edge out of it would be possible but it would take doing; it's not really about that.  I wouldn't really call this an "everyday drinker" related to what that usually implies about a moderate quality level tea, but it is easy to brew and would work well with breakfast.


I let the next infusion run for well over 5 minutes, starting from the cup being hot already, so to the extent it's possible to change aspect outcome on the third infusion brewed Western style I can describe how that goes.  When I said this tea would make a fourth infusion (or maybe more) I meant that this type of tea won't completely stop ("brew out"), and the infusions won't become negative, so using a quite long infusion to get one or more beyond the normal cycle will work.

It might even be worth simmering it to see how that goes; I've been seeing discussion of that approach recently.  A boiling versus infusion approach is only commonly referred to in two contexts (beyond making masala chai, which is something else, about making a tea and spice mix):  some people simmer white teas, typically more for a compressed shou mei version than a bright, fresh bai mu dan, or it's not unheard of for someone to stretch one last infusion out of an aged sheng that way, after going through a very long cycle of extending infusion time to get a few extra that way first.

The flavor is the strongest it's been on this third infusion but the body is thinning a little.  It's not changing, not transitioning in that sense, and still on the subtle side.  Using a higher proportion would bump the intensity a little but the character wouldn't change; it's a subtle, soft version of a black tea, more or less the black tea version of silver needle or silver tip.


I like the tea.  My personal favorite for black tea is Dian Hong (Yunnan black leaf-based tea), especially because of the flavor intensity those can convey, cocoa, dried fruit, roasted sweet potato, and so on, so a mild bud-based black is a good bit off that range.  But I still like it, and it seems to be well above average for quality level for orthodox black teas in general.  This tea would be perfect with a light afternoon snack, complex and flavorful enough to provide a pleasant input, but soft and subtle enough that it would work well with mild pastry or butter cookie.  It could work with breakfast too if someone is good with milder black teas with breakfast.  I like different tea characters with breakfast every day, depending on my mood that day.


I have several versions of Nepal teas to try so if my impression changes I can mention it related to reviewing others, but the general idea is always to pass on a clear impression, not to get to the bottom of an objective description.  To me it doesn't work that way; interpretations always vary, and overall-impression of type and quality level depends on degree of background experience.  Earlier on in a blog-reviewing process I'd often try teas a few times prior to final write-up but I'm keeping too busy with posts lately to do that, and combining multiple forms of notes really doesn't work well.

The white tea version (probably similar to one that I already reviewed) will probably be my favorite.  That style of Nepal white tea is distinctive and different from teas from other places, even much different than Darjeeling range that I've experienced (although their white teas can be great in a few different ways).  Nepal versions tend to have a bright, intense fruit to them, between an orange and lemon citrus range, with a lot of mineral almost as intense as that input.  At any rate I'll post further about what I think of those other teas, a few other types that Narendra shared.