I live in Bangkok, Thailand.  The “ancient world” refers to modern and traditional aspects of Thai culture, and to a silly expression my Thai wife uses.  She is a former journalist with a colorful way with language, some of it unconventional, which wasn't diminished by going to grad school in America.
Old traditions here include Buddhism, old-style markets with almost no packaging, travel by banana boat, and agricultural lifestyles that have changed less than most in Bangkok have, although everyone in the country seems to have a cell phone now. 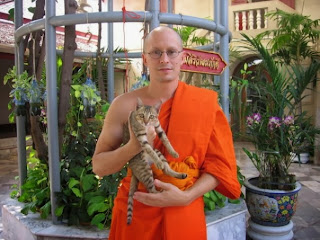 I ordained as a monk here for two months and lived a lifestyle almost exactly like that described by strict Sangha rules over 2000 years ago.  For example, the cat I'm holding in the picture is a female, so I really shouldn't even have been touching her (with that rule applied more strictly with humans).

Oddly they don’t drink a lot of tea here, or at least the kind I like.  Popular teas include Thai tea (black tea with milk, and other flavoring), sweetened lemon tea (also black tea), and bubble tea, a flavored tea variation with tapioca pearls.  There is a lot of Indian and Chinese influence here, and many Chinese immigrants or second generation Chinese Thais, which better relates back to teas I now drink.  The Chinatown here is said to be the second largest in the world, after the one in San Francisco, of course not including cities in China, a different thing.
I wasn’t really introduced to drinking loose teas here, although I had tried some.  That happened on a business trip to China, to Shenzhen, just over a year ago.  My first experience was an unusual place to start, with a relatively formal gongfu-style ceremony, complete with a hostess wearing traditional silk clothes, and with lots of figures to pour tea over to enable making wishes.

A lot of first-tea-experience stories include “just then—I knew” but I didn’t get it right away.  The tea flavors were very subtle and unfamiliar, perhaps better than I could appreciate, or maybe it wasn’t such good tea, I probably wouldn’t have known.  Later in the trip I visited a tea store and tasted more tea and bought some but I still kept getting drawn into tea more as time went on.


So now it seems odd that the modern tea culture and tea popularity I read about in America isn’t happening here.  There are tea shops but the selection is limited outside of Chinatown, and tea shopping is an unusual experience there, as is just walking around.  The Bangkok Chinatown is like visiting another country (Renegade Travels description).  It’s a place I’d like to get to more often than I do, but I don’t get many visitors here that are obsessed with tea as an excuse.


I’ll try to keep a bit of tea tasting focus in the entries I write, but lots of other related ideas keep coming up.
Posted by John B at 4:06 AM