I comparison tasted two different dahongpao teas recently.   Both were so similar that a description of a typical taste profile might have fit either:  a more oxidized oolong with a distinctive mineral flavor as a main component,  along with earthy elements (towards wood), and pronounced cocoa and cinamon elements.

One tea I bought at the Tea Village shop (see last post) and the second was sent as a sample along with other tea I bought (lapsang souchong) through an online contact in China, Linda Lin.

Of course I had written a post about this type of tea before, here. 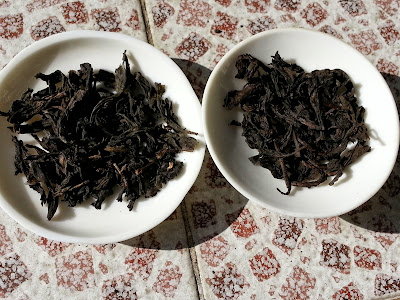 
Both teas had a relatively similar flavor profile that I would associate with the tea type.  The tea from Tea Village (hereafter the "first") had a more distinctive cocoa taste and the other was closer to cinamon, and the vague woody flavor in such teas differed.


In the first it seemed to relate to an undertone that was almost orange citrus,  but not quite that,  and the other was closer to the woody element that reminds me a little of fresh cardboard.  It sounds like a negative thing but I don't mean it that way, since I like that flavor. 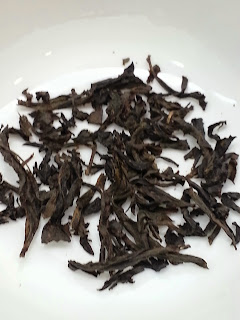 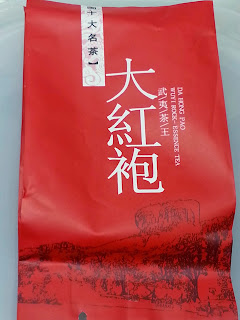 Just putting it a different way, as by saying it reminded me of a fresh-cut hardwood scent, perhaps hickory, would turn that back to more of a positive description.

Being from a rural part of Pennsylvania I did cut plenty of firewood as a child and many years ago I might have remembered what different woods really do smell like but for now I've sort of lost that.  As I recall cherry wood is nice, sweet, but then one would expect that.


I'd like to say that one tea was better, or at least something semi-descriptive like "cleaner" but I can only say I preferred the Tea Village tea.  I think with even a few days between tasting it would have been hard to distinguish those minor taste differences because the teas really were similar.


Teas like this make me think about how personal preference causes some elements that would be negative for some to be favorites for others.

An opposite extreme,  it seems to me,  is a tea like tie kuan yin.  Higher grades are more floral and sweeter but any typical example is a very agreeable lightly oxidized soft oolong  (although it is possible to prepare is as darker tea).   But in contrast a tea like dahongpao, at least the grades one might ordinarily run across,  one might more naturally like a lot or dislike since the taste is a little more unusual.


I recently tried a golden monkey tea that seemed to share this, an unconventional taste profile that would seem to turn one towards really liking it or not liking it, although the taste elements didn't click as well for me.


Aside about a different tea, golden monkey (bonus review)


The golden monkey tea was sold as a red tea, or as I understand it what we call black tea, with the color difference essentially referring to black teas brewing to a reddish brown color.  I always held out hope "red" could relate to some sub-genre but per every online mention it's just black tea, essentially completely oxidized, described by a different color. 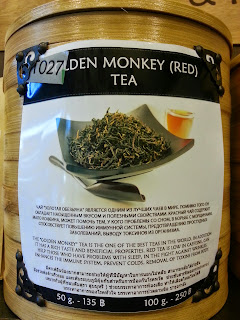 That tea tasted naturally sweet, with plenty of stone fruit flavor, peach or maybe apricot, and some earthy or spice undertones.  It seemed to be quality tea, and quite interesting,  but some component didn't work so well for me.  It reminded me a little of cantaloupe,  the only fruit that I hate, along with other melons beside watermelon, so maybe that alone explains it.

Or it just could be an indescribable preference inclination.   A friend in China gave me a very similar tea once, perhaps the same but with packaging only in Chinese, and over time I've come to appreciate the tea more, but it wouldn't be a favorite.

Some others might see shou pu'er as possessing a strange range of ways for tea to taste, a little towards dark wood elements, or even root beer or charcoal, but I like what I've tried of it.  Most tea types work for me to some degree, even that golden monkey tea, maybe just less so.  I do also love lapsang souchong, with a post in the works about that since I just tried three versions.


Other aspects beyond taste


Of course appeal could also relate to the quality of the tea, in ways beyond taste profile issues.  Minor variations in the two dahongpao teas related to aspects that seem to me to identify a tea quality level other than taste:  the feel or body of the tea, the way the flavor lasts, which I think of as "finish" from wine tasting,  or how the tea varies across different infusions.

Better quality tea seems to not only make more tea but also remain more consistent, or at least change in ways that still relates to appealing tea.  Sometimes a lesser quality tea seems to shift flavor after an infusion or two or just fade out quickly.  This also seems to relate to tea type, but that's as well saved for another post.

Those two teas were so similar (with only minor differences related to these) that I left them out of the review.  But then for someone else that valued different aspects of tea more or was able to determine them more clearly that might not be the case.

I tried an unusual green tea recently, Taiping Houkui, or Monkey King tea.  For once I'll try and write a simple tea review, not delving into too much research or deeper thoughts on tea.  It was a green tea, not really my favorite type, since I'm more taken with darker oolongs and black teas these days, but who doesn't appreciate interesting, good teas (if they like tea).


Some of the taste elements were common to a lot of green tea:  a grassiness, some floral tone, and a generally fresh taste.  More notable to me were a nutty flavor and slight smokiness.  The body of the tea, the feel, was also different, a bit heavy, thick.  In general it was a nice tea, and different.

Per a little research--a good reference here, and a little from the vendor on a G+ reference here, or more on their website--and the labeling that floral was supposed to be orchid, but I'm still working on remembering and identifying the taste and scent of different flowers.

The appearance of the tea is perhaps more notable than the taste, which was distinctive, but what more to say of that; long leaves and a single bud are pressed as a giant version of a tea like Longjing. 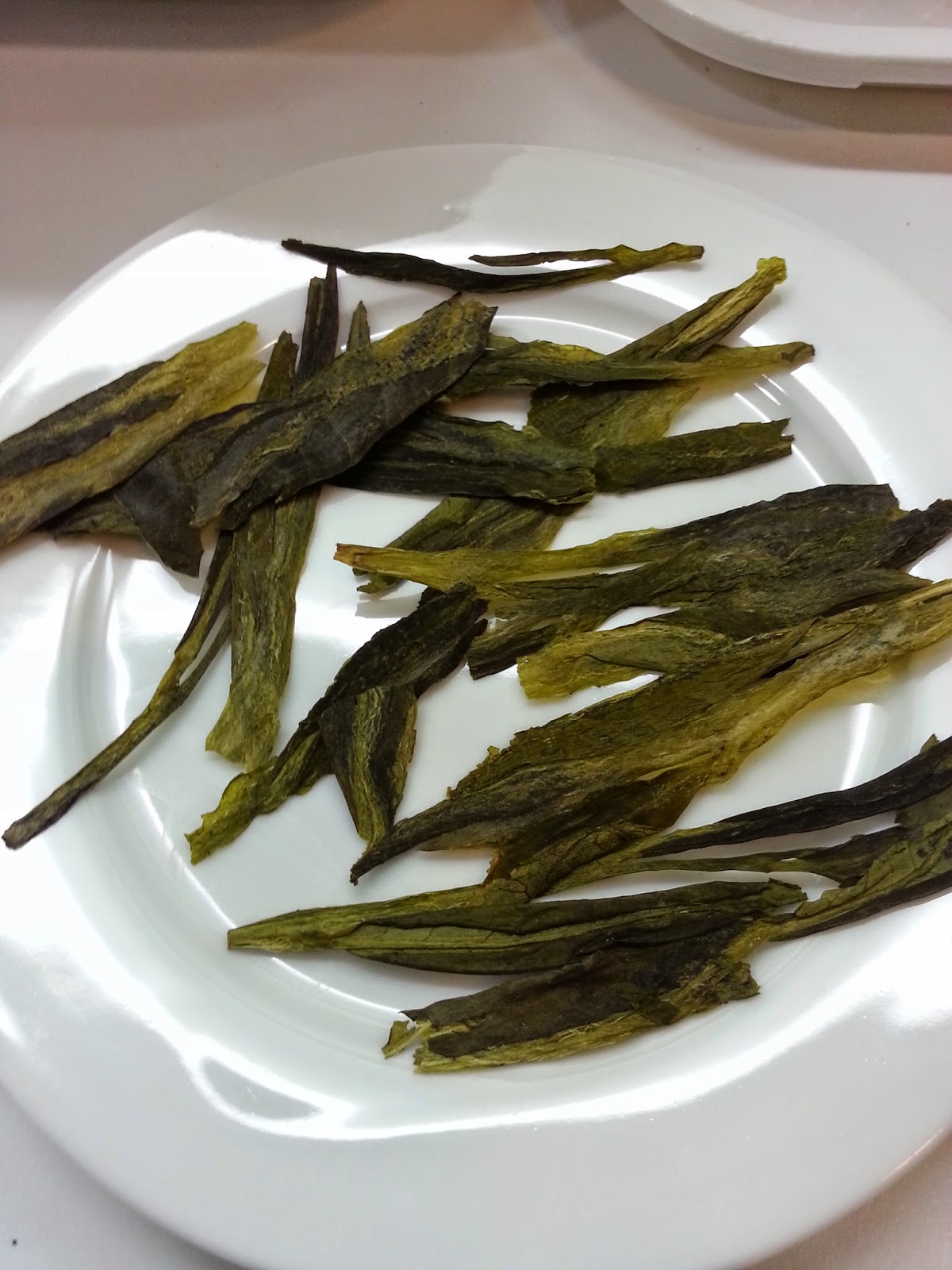 I think I would probably adjust the review if I tried it a number of additional times, and having bought a decent sample of 50 grams I will do so, but I'm getting behind on reviews so I'll just write up first impressions first. 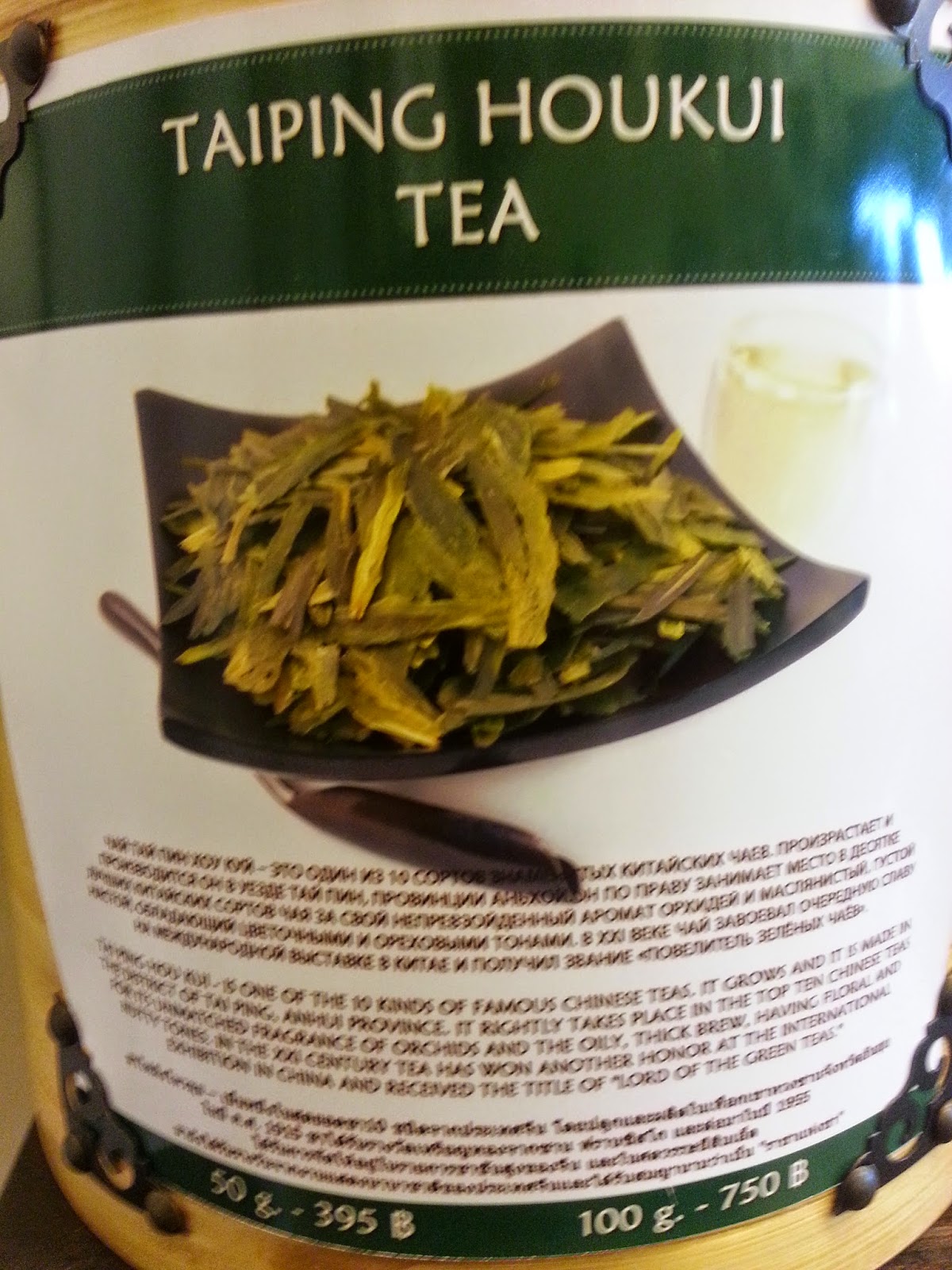 A green tea lover would surely fall in love with the distinctive nuttiness of the tea (like cashew?), or freshness, or pleasant balance of floral and vegetal undertones.  The other aspects--in particular the unique body, the thickness of the tea--I'll need to try a few more times to get a feel for, but I like it.

There didn't seem to be much astringency to speak of, a smoothness familiar from drinking "greener" oolongs.  Surely this was part of the character of the tea and not the result of careful and ideal brewing technique.


The shop, Tea Village in Pataya


This place is definitely my new favorite shop.  Just too bad it's not where I live, in Pataya instead of Bangkok, but I do get over there sometimes.

For readers not familiar with it, Pataya is known for night life, and to be honest it's the sordid sort Thailand is infamous for rather than a club scene.  But different kinds of tourists also go there for different reasons, for example Bangkok families getting away for a weekend. 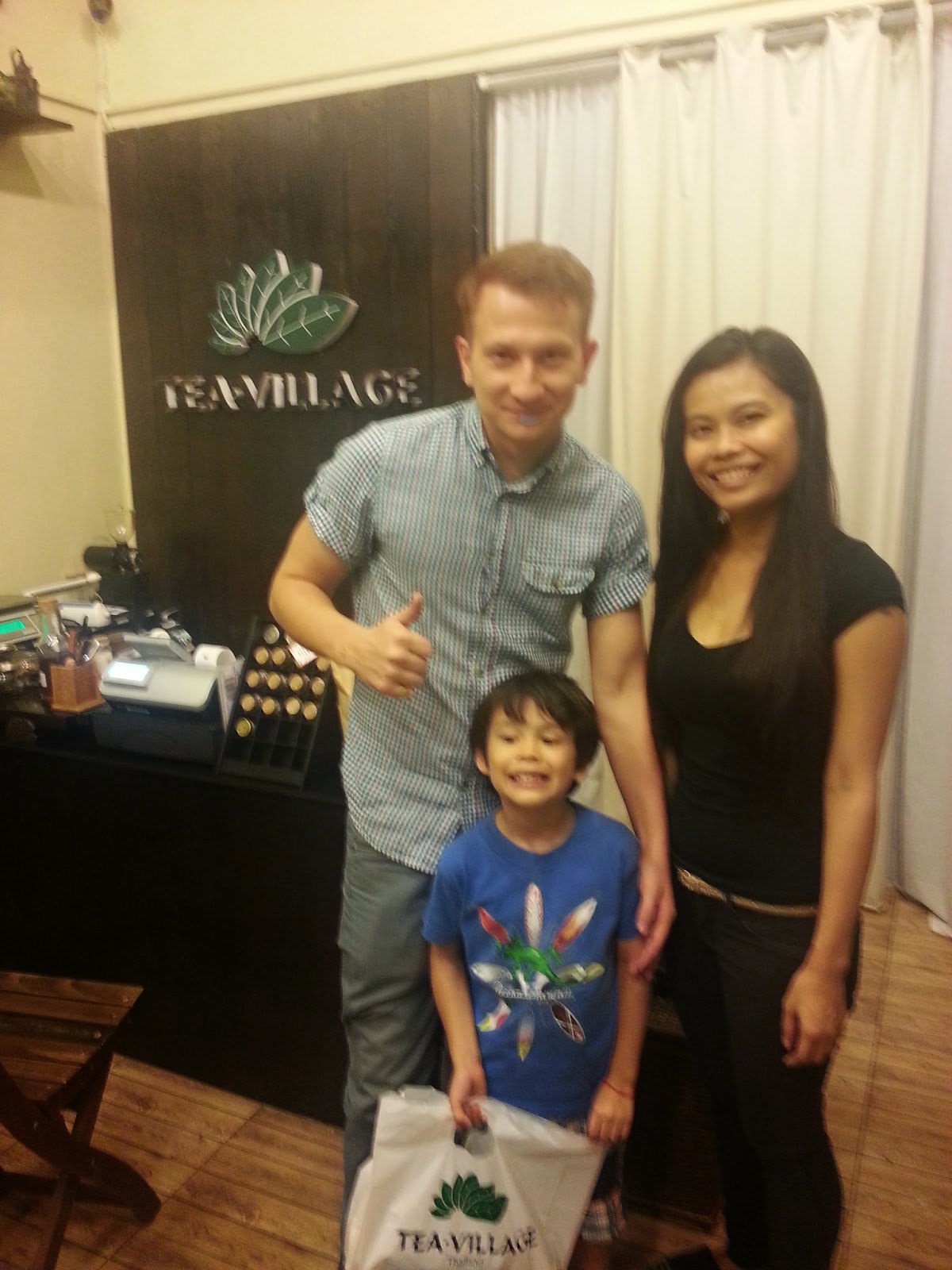 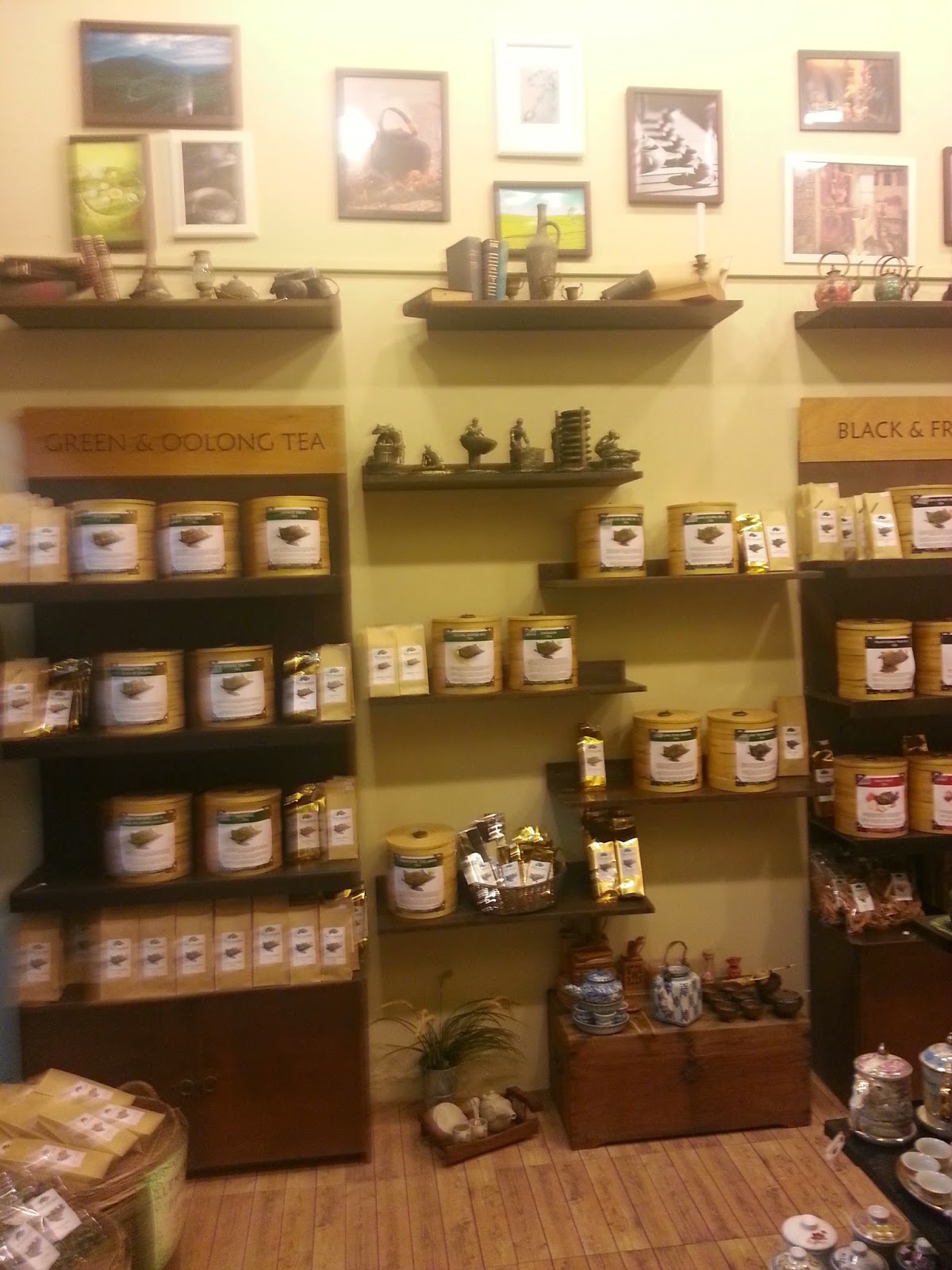 What would be the ideal tea shop?  Maybe a place with a good selection of basic teas, at good prices, with good product quality, and other far more unique types, along with a good bit of teaware?  Or a shop where friendly owners love to talk about tea, and are happy to let you sample different kinds before you buy any?  That's this place.

They're even good with five-year-olds asking lots of questions, trying out herbal teas, and threatening to break everything in the store as an energetic boy might, which is over the top hospitality.


After this excessively positive review I should mention that although I did buy this tea and a few others they did give me a complimentary sample of a Red Jade tea that they don't even sell, and some blue pea tisane (floral herb tea), and a small tea cup to Keoni, my son, for free.

But I was a big fan before all that.  I really like a couple other shops in Bangkok but in terms of interesting selection combined with overall value this shop matches any I've visited.  I'll write more about that Red Jade and a nice Dahongpao presently and it will be clear why I was so impressed.