Gyokuro from the Trident Booksellers and Cafe Boulder, Colorado


I recently reviewed a very nice Japanese green tea an online friend sent, from Peter of the Trident Booksellers and Cafe in Boulder, Colorado.  I talk to lots of people from different places online about tea, mostly in one Facebook tea group, and in this case that led to him sending some teas to try out (very nice!).  It's an unusual case because they don't sell tea online, but then different background for sharing tea isn't unheard of.  I lived two places in Colorado for a long time, in the Vail Valley and Fort Collins, not really related, just saying.

A bit of back-story about Japanese green teas:  I usually don't drink them.  That's odd because they were one type that served as a gateway for me to get into loose tea, initially from drinking tea in Japanese restaurants.  And we picked some up tea in Japan a long time ago, and a little there again last year; kind of a shame I'm not more on that page.

There's not really much to explain about that preference.  People seem to get into tea based on trying what they cross paths with, and then later other exposure can help steer them in different directions.  I drifted towards Chinese teas, more to oolongs and black teas, although I drink a lot of different types regularly, and go through cycles related to teas from different countries.


Although I won't get far in identifying the tea trueness-to-type I can give an opinion of the experience, but first I'll start with a little background on the type.  This is from the "My Japanese Green Tea" blog by Ricardo Caicedo, a site that's really worth a look for reference about Japanese teas, really not limited to green teas:


Gyokuro (玉露, literally gyokuro translates as jade dew) is considered to be one of the highest grades of green tea in Japan....  Gyokuro has a dark green color, and when brewed it is slightly sweet, with a refreshing aroma.

How is gyokuro made?

The process to make gyokuro is very similar to sencha, the only difference lies in the cultivation method. At least 20 days prior to harvesting, the tea leaves are shielded from sunlight. Because of the added difficulty in shading, the production cost is higher.

What difference does shading the tea make?

The characteristic taste of green tea is due in large part to an amino acid called L-theanine. This compound intensifies the umami taste in tea and also adds sweetness to it.


The rest is really worth a look, with lots on brewing process recommendations, and more on those compounds in the tea.  The short version for the recommendation is to brew it using very cool water, relatively, but it's as well to read the long version.  I didn't actually read this prior to making the tea but I was already familiar with that being standard related to this type, since standard brewing parameters keeps coming up.

As for description of this particular tea, Peter passed on that it's from Asahina, Shizuoka, Japan, and it's made from the Yabukita varietal, which is the primary varietal used for Gyokuro. 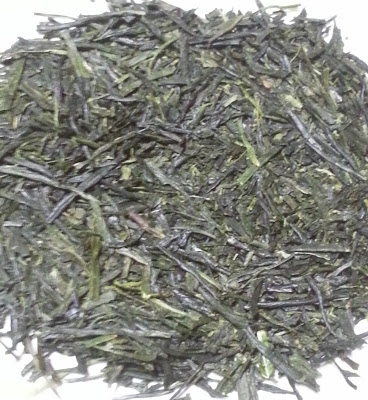 My first impression:  the tea tastes like seaweed.  That's Japanese green tea for you.  Some might read that as an insult but tasting like seaweed isn't necessarily a bad thing.  There really is a range of what seaweed tastes like though, since it's not just one plant type (but then most people know that, right?). 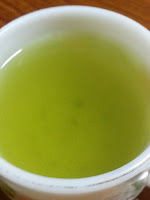 I don't particularly love seaweed but I have come to appreciate it in limited forms, in sushi, of course, or with miso soup or ramen, or separate as a roasted snack, common in Korea but kind of an Asian thing in general.  In Hawaii they mix it with raw tuna as poke (a different kind than sushi is wrapped with), which probably would have been going too far for me, but since I was a vegetarian when I lived there it never came up.  Anyway, seaweed can be nice, it's just a matter of getting used to that flavor range, and the general idea.  I tried a very nice roasted river weed from Laos before as well, which was relatively similar, but there is no related point I'm headed towards, just passing that on.


I think the tea is probably very good, even though it's a type I'm not so accustomed to.  Past tasting like seaweed the flavors are nice, fresh and clean, with a nice roasted sesame effect coming across "under" the vegetal elements.  The sweetness is nice, and the complexity, and although it's not the same a I'm used to from oolong the feel of the tea is nice.  Once I "got back into" that range a little more I liked it.  The vegetal aspects really stand out but it seemed like a complex mineral undertone really made the balance of the tea work.  The seaweed effect seemed to level off a lot over infusions, but I'm not so sure that wasn't just me adjusting. 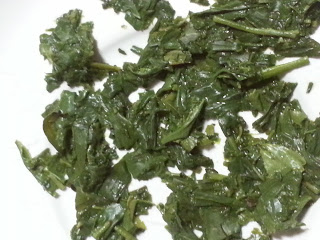 I did really used to like Japanese green teas, although I surely wasn't drinking versions as nice.  I've probably prepared Japanese loose green tea a couple of hundred times, although I take tea a lot more seriously than I did years ago when I first started.

I just did a post about tasting, and sort of researched the subject a little, although it's a stretch to call the review I did that.  That taste is related to umami, although that's only one component, which of course Ricardo said a little about, surely with lots more on his site about all that.

I don't want to take this to being a research post because I've got plenty to say about it besides that, so I'll just mention the Wikipedia article on umami as background.  From there I'll go into a few points made by Barb Stuckey in a video on tasting.  She wrote several books that cover taste background in more depth, perhaps most completely expressed in "Taste What You Are Missing," but for purposes here only a few basic ideas are required.

It's sort of common knowledge, but umami is one of the basic tastes.  It's sometimes translated as "savory," although it doesn't translate well, the reason for leaving it with a Japanese name for description.  It tastes like seaweed, as much as anything, but really one part of what seaweed tastes like.  One odd part from that video was that it's really tied to a range of glutamate compounds, so MSG--mono-sodium-glutamate--is one of several compounds picked up by related taste receptors on the tongue, along with others for sweetness, saltiness, and bitterness.  Of course MSG is also known as the flavor additive that's perhaps best known for being used in Chinese foods, which gets a bad name because some people are sensitive to it.  It would be interesting to see how those people react to eating a lot of seaweed.

In that video I'd mentioned Barb Stuckey did an experiment that's easy to reproduce that can very quickly help us determine to what extent this is a taste, something identified by the tongue receptors, versus a flavor, a more complex sensation also informed by sense of taste but also related to smell.  The other portion is picked up by receptors in the nose from aromatic compounds making their way through air passages, essentially in the lower rear sinuses (but don't just take my word for that, since this isn't my field, read up if you like).  To determine the difference you taste something with and without your nose pinched shut.  It seems too simple to work, but it does.

For the experiment it might help to have a second type of tea on hand to use as a control, and I did cold-brew the last of a nice (but mid-grade) dan cong I have on hand from drinking it previously, so I used that.  If you try it pinching your nose closed most of the taste drops out (flavor diminishes, really, and the "taste" aspect from the tongue stays the same).  We tend to use the terms interchangeably in ordinary language, but there is a distinction.  So the question is:  does the "seaweed" taste drop out if you try that with this tea, is it really umami, or is it flavor and scent based?  The suspense...

Both, sort of.  It is related to a basic taste, so you still "get" a little of it tasting with your nose pinched, but not much.  A range of other characteristics that seem related do drop out from doing that, and then come back as soon as you stop pinching your nose.  It's kind of a funny experience.  This is not exactly science but it seems to support that the one aspect really is umami, a taste element, but that as I experience it that's very continuous with other aspects that are not that, picked up as scent instead.

Kind of really a tangent but something unusual came up related to the dan cong, the "control" tea.  It was still pleasant without scent-based flavors included but most of the experience of the tea stopped when tasting it that way.  A floral component really defines that tea and it just wasn't there.  But the interesting part related to sweetness instead.  It's a naturally sweet tea, but of course that can't be from a sugar compound.  Per input from Michael Coffey in another post this is what natural sweetness in tea comes from:


Sweetness typically comes from amino acids, but not always.  Amino acids are influenced by a number of factors--for example, the cultivar might naturally produce more than other cultivars, or environmental conditions might be just right for the plant to produce more than usual...


Since the sweetness isn't coming from sugars, what your tongue would pick up, that effect of sweetness should stop if air flow to your nose is completely cut off.  And this happens; easy to check by pinching your nose and tasting.  This also explains why tea tasting doesn't work as well with a cold.

After just a few infusions I was really enjoying the tea; funny how expectations and experience range can come and go like that.  As Japanese green teas go the "seaweed" / umami aspect is only part of what might relate to connecting with personal preference, or not.  This tea reminded me of the other positive aspects, and the better experiences I've had with Japanese green teas, and why those helped get me interested in loose teas to begin with.


I won't be switching back to drinking a lot of Japanese green teas right away but I always did expect to go through some related phase again eventually, and this just confirms that will probably work out.  I think this tea would make for a great experience for anyone, even if they don't like green teas or Japanese green teas, to at least experience some of the novelty and potential in them.
Posted by John B at 9:55 PM