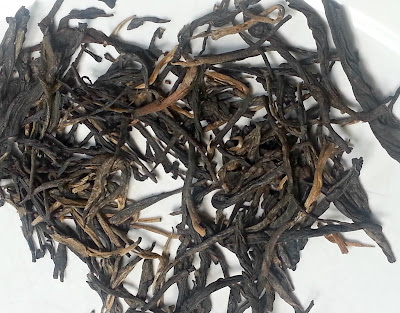 I'm reviewing a Teasenz Dian Hong, which they describe as a Black Needle style tea (with a sample supplied by them for review).  I often mention shooting for a simple review, and then drift off on tangents, and in this case I did also taste it along with another related tea.  That wasn't informative, they weren't similar enough, so I'll edit out the comparison and say a little more about that after the review.

I brewed the tea Gongfu style, modified to use relatively longer infusion times.  That involves stepping back the proportion from some teas I brew using really short timing.  The tea would be ok prepared Western style, not so different, but using more infusions instead and a bit higher proportion gets you a better look at the aspects, and I tend to like Dian Hong better made this way.  It's hard to know if a certain tea wouldn't be slightly better prepared using a modified Gongfu approach or a more typical Western approach without trying both, but the general aspect range is typically not so different, it mostly just shifts around how the aspects balance.

On first tasting the tea seems nice, all the typical range, a bit earthy, with some soft and rich redwood-range wood tone, and with some cinnamon standing out.  Fruit is present but I'd expect that range will stand out more after an initial round.

Things do change a lot on the next infusion, even though still moderate in time-length (a bit over a minute but I wasn't timing it).  The color of the tea darkened to a clear dark red.  It picks up a good bit of toffee or dark caramel sweetness.  The spice isn't pronounced but I'm still picking that up.  I suppose that could instead be interpreted as cocoa, or maybe as a bit of both, but the other complexity makes it trickier to separate them.  The fruit tone is still subtle, in the yam range, but with enough depth adding another fruit or two to that description-list might be justified.

The flavors are relatively clean, and the feel is nice, maybe a bit soft, but to me that works.  It still has decent body and lots going on so it doesn't need some unusual form of dryness to make it more interesting.


It doesn't transition much on the next infusion, but it was nice the last round anyway.  The flavors weren't really murky before but the wood tones may have brightened just a little.  That wood is in an interesting range, along the lines of cedar / redwood.  It hints a little towards spice still, or maybe cocoa, although that last may have faded, a little harder to pick up.  More fruit shows up, but still as an underlying layer, not as pronounced as the earthy wood tones.  It all works; it strikes a good balance.  It's on the softer side, not astringent at all, but still full.


Light mineral tones underlie those aspects, and sort of tie to the body of the tea.  Something comparable happens in lots of other teas, just in different senses.  It's nothing like the Wuyi Yancha background context--those particular minerals--but the function is the same, the way it gives the range of both types of teas a nice depth and balance.

The tea is nice:  a comfortable, complex, easy to drink black tea.  Aspects do vary for Dian Hong but this is within the range of what is typical.  It could pick up a little in the way of structure, or feel, or even a little in complexity, but it's well balanced, with a good bit going on, and nice character.  It's a kind of tea you could keep drinking frequently, which would probably work out well brewed different ways, or prepared at different infusion strengths.


I tried this tea at the same time as a Farmerleaf sun-dried autumn harvest Jing Mai (Yunnan) black tea (reviewed alone here), but it wasn't similar enough to be informative.  The comparisons are just a phase I'm going through, what I'm experimenting on lately.


Even if the teas are different as long as they share enough commonality tasting two together can help highlight subtle aspects that they don't share.  But if they're too different it won't work out like that, and comparison will just be a distraction, too much about differences.  This was more like that second case.  Someone really into that cha qi aspect might not do comparisons at all; it would give you a blended cha qi effect, who knows if good or bad. 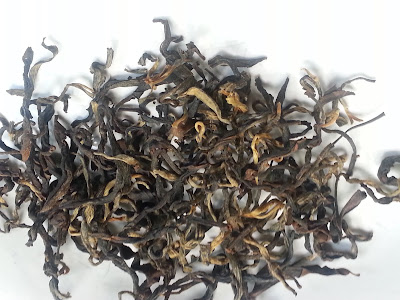 The Farmerleaf tea also had light wood tones as a starting point, it was also sweet, and also full in feel, maybe a little "drier," again with some fruit and hinting a little towards spice.  It started out more in the cocoa range but shifted to wood-tone aspects later.  It sounds exactly the same, put that way, but it was quite different.  The Farmerleaf tea came across as more subtle, which stood out in comparing it to the other oven-dried Farmerleaf black tea as well.  Per that vendor input sundried teas are supposed to keep gaining more character over the first two or three years, but I've only let it sit for however many months so far, and it's not even close to a year old.

There was an overall effect difference, how it all balanced, beyond the secondary characteristic differences between the two teas.  Maybe those contrasts would have been informative, if written out as a comparison tasting, infusion by infusion as the tasting notes were taken, but it was subtle enough that it didn't seem clear.  More than that, it didn't seem to add anything to helping with the review process.

The Farmerleaf tea also had a bit more earthy range, and less fruit.  Pronounced aspects ran a little towards forest floor, or maybe just woody in different sense, or possibly even towards a leather range.  It always sounds odd describing teas outside the range of actual food flavor aspects but that's not necessarily a bad thing.  I had a shou pu'er with lunch today that might be described as tasting like tar that was nice.  I love the odd earthy flavors ranges that can stand out in Wuyi Yancha, when those work well, in nice versions.

Both teas were nice, just different.
Posted by John B at 3:32 AM