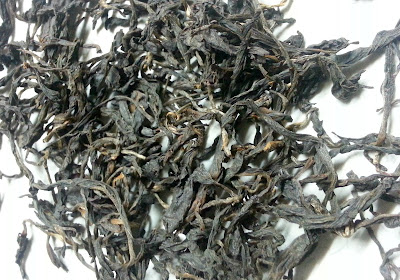 I'm trying out another Assam version, after comparing two others from Assamica Agro in a recent post.  This version sounded good in the description,  with cocoa paired with malty aspects versus more towards fruit in the others.  I may as well cite that description, since I've brought it up:


Dry leaves offer strong fruity aroma that develops into full-bodied and well-rounded robust malty brew with chocolate and molasses layers. It will leave a bit of tangy feeling at the tip of your tongue that will soon change into a sweet aftertaste. Organically grown, handcrafted by small farmers and exclusively brought to you for pure enjoyment.


The tea looks good, long twisted leaves with some tips. The dry scent is nice; there is some cocoa, along with a but of sun dried tomato range savory tone.  I'm brewing the tea straight Western style this time, no messing around with Gongfu preparation (which I do like doing, the messing around with parameters part).  I've really taken a liking to an infuser that my parents bought me for Christmas (odd they'd get that right); a really basic device that is well designed, shown in a picture later in the post. 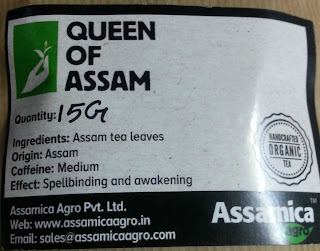 It is nice, based on tasting the brewed tea.  I really pick up that savory sun dried tomato aspect more than cocoa, of course along with malt, which is more subdued in this version.  It's definitely not overly astringent, on the softer side if anything.  I can see cocoa being an accurate description but it's not so pronounced that I would have certainly identified it.  It tastes a little like that softer version of malt too, like ovaltine, which of course tastes a little like cocoa.


Beyond that there is some additional complexity.  Some cedar range wood tones fill in some earthiness (on the vegetal and earthy borderline) and fruit range is back to along the lines of dried tamarind.  It's complex but not intense; depending on preference that could either be seen as a weakness in the tea or as just right.  Some Dian Hong can be like that (Yunnan black teas), really nice in character with plenty of depth but subtle.  I'm not really claiming this is like a Dian Hong but related to some aspect range and general character it's definitely along a similar line.


Prepared this way, using standard Western parameters,  it will give up another nice second infusion and a third might be a stretch, typically losing complexity and pulling towards woodiness or even cardboard while thinning.  Shifting the tea proportion up a little and shortening times allows for a better third infusion and might improve the first two slightly, but that choice also starts to depend on how long you want to spend and how much tea to drink.  A 3, 4, and 5 minute brewing cycle (just and example) takes 12 minutes in all, and would still work with a half hour breakfast, but using two 4 and 5 minute steeps lets you rush things. 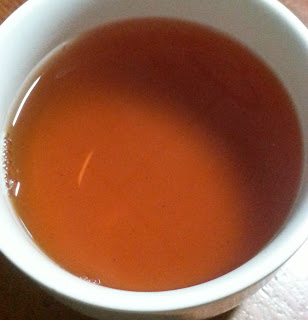 The second steep picked up a little more caramel tone (they said the tea tasted like molasses in the description; I guess at some point citing caramel, toffee, or molasses gets to be an interpretation as much as a distinction).  I tend to use water around 90 instead of full boiling point for a lot of black teas but as soft as this is and being a bit subtle full boiling point would be fine (the producer recommends 90 to 95; sounds right).


Caramel sweetness picks up more at hot brewing temperatures, which reminded me of that point.  This infusion is still nice, with good intensity for going longer and bumping temperature a little.   The malt just starts to transition to that earlier pine aspect I'd mentioned in the last review, with the savory sun dried tomato dropping off.


Now that I think of it another infusion could transition to pine more, not woodiness, based on how those last teas went, which I liked better.  This infusion version and tea in general is still fine, clean, balanced, and complex, with aspects a good match for my personal preferences. 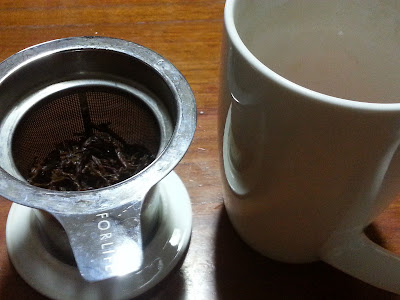 The next infusion did thin a little but moved in the same direction, more caramel (or toffee, or molasses).  The pine aspect isn't pronounced but a faint version of it serves as a context or flavor structure.  This tea might be ok for a fourth steep or I guess could work for an extra cold brewing infusion (sitting it in the fridge with room temperature water to brew for a day), but I'll just let it go instead.  The flavors range is limited enough that even if drawing out brewed intensity worked it wouldn't be the same.  Western style brewing black tea generally works out like that; three good infusions using relatively long brewing times is plenty (compared to Gongfu style preparation).


It's not really ideal to only try a tea one time for a review, and if I did try it once or twice more I'd probably shift this impression a little, maybe adding an aspect, or clarifying how it might change if prepared slightly differently.  I think this does already capture the basic nature of the tea though, give or take a detail or two.


I liked this tea the best of the three I tried; it's nice.  I'd probably have more to say related to placing it in a range if I'd tried other versions of Assam on this level, but I haven't.  I've tried reasonable versions of Assams that weren't necessarily CTC tea but they were chopped up a bit, maybe as much due to machine harvesting steps used as processing style.

Looking back through this blog to compare it to other teas there isn't an Assam review here, besides blending some in making masala chai.  I went back to tasting notes covering a nice version of one from Lattakoojan Estate in 2013, just before this blog started, and it sounded good but not exactly similar, more citrus and aspects of raisin and spice instead of cocoa and dried tamarind (along with malt).  Obviously I can't really compare them from memory, and the leaf appearance of that tea wasn't well noted there.

These teas have been ok compared to orthodox versions from other regions.  The malt was a bit intense in the first two versions but milder here.  Astringency wasn't really a problem for any, related to being balanced well.  If anything this tea was a little on the soft side, which works well for me, but others' opinions could vary on that.  I didn't add much about feel here in this write-up but it didn't have a lot of dryness or structure too it, just enough fullness to work out.

I suppose these teas could have been a bit more refined, brighter, or intense to compare to the best examples of black teas from other regions but for the most part more than that the character and aspects are just in a different range.  Somehow drinking a tea like this makes perfect sense for breakfast; it paired very well with a granola cereal this morning.