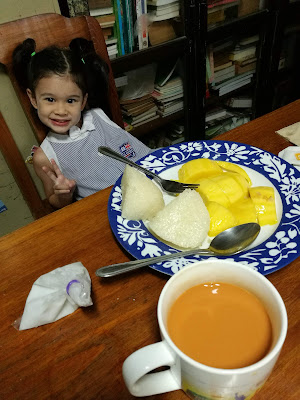 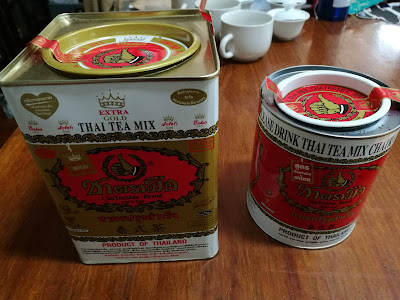 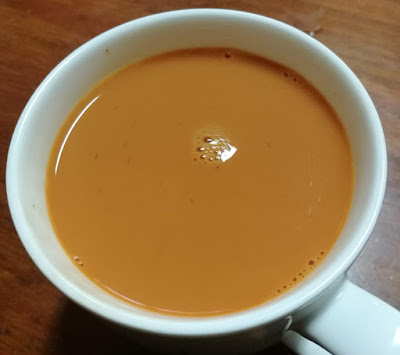 I first reviewed the standard red label Cha Tra Mue brand of Thai tea not long ago, and a friend recommended that the "gold label" version is better.  I'm only now getting around to trying it.

It probably is slightly better.  This won't amount to much of a detailed review or comparison because I didn't try the two versions in direct combined tasting, and there isn't that much to say about how it tastes.  I had owned the two versions at the same time (hence the photo of both), but gave away that earlier version before I got around to trying this other one.

It tastes like any version of the orange Thai flavored tea.  Once you get the preparation details down, the level of infusion strength, and amount of sugar and milk, it's all in the same range.  There's a bit of a trick to that since it works well to brew it stronger than you would normal black tea and dilute it with milk.

The part about potentially using multiple infusions is strange too, since ordinary black tea will just transition (vary) across multiple infusions but the added artificial flavoring in this mostly comes out in the first round.  I'll usually brew it twice and mix them, but there would be different ways to address that.  I suppose brewing a lesser amount for longer for only one infusion makes the most intuitive sense, but that's not what I do, since I carry over habits from brewing other types.

All the same I'll step through what it tastes like, how it compares to the other version they make, and what other experiences I've had with related preparations. 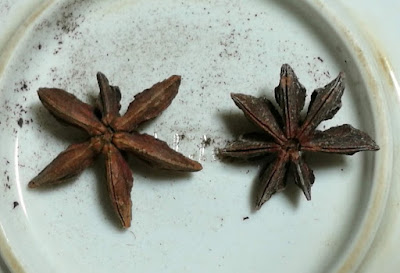 As described in a post about making a version from-scratch it tastes a bit like tea and spices.  Per that research the original version may have combined Assamica black tea with roasted tamarind seeds and orange blossoms.  Modern versions taste more like star anise than anything else.  Now that I think of it that other "red label" version of Cha Tra Mue flavored tea tasted best with a bit of star anise added to it, bumping up that flavor range a little more, but I've not tried that with this one.


You can tell by the taste this result is achieved through artificial flavoring additives.  For some that's a deal-breaker, for others just an ordinary, harmless part of modern life and diet.  Tea enthusiasts tend to not go for that, although the other range of people who love tea but like flavored versions, boba, and all sorts of blends would disagree, and they could still also self-identify as "tea enthusiasts."  I'll fill in more about specific taste in relation to the other version.


Comparison with the red label version


It seems like the artificial flavoring is identical but the back tea used is different.  There is no description of that difference so I'll be speculating it in describing it.  There is a difference visually; the other tea is ground up less, with some lighter tea material included, with this version's more black and uniformly finely ground.  My impression is that the other version may be made with Thai produced black tea while this may well be Ceylon, or at least a different version of Thai produced black tea that is closer to a standard Ceylon.

I'm guessing that about the input differences in part because of how a specific version of Thai black tea looks and tastes to me, which matches what I've experienced in these versions.  That black tea was on the soft or mild side compared to other commercial / CTC (crush-tear-curl) black teas, a bit woodier in flavor, less astringent, with less pronounced malt and mineral aspects.  It wasn't bad for those differences but not really a standard commercial black tea profile.

To back up to generalities about commercial black teas, Assam versions tend to be quite malty, and astringent, strong-flavored and often very astringent.  Ceylon range (and all commercial tea range, really, including Assam) varies a good bit, but in general those black teas are slightly less malty and heavier on mineral aspect range, and just a little less astringent.  That Thai version was unlike either, a bit atypical as black teas go, as described.


A fellow tea blogger once described Ceylon black tea as "tasting like blood."  I guess that could be in a good sense but it was being used as a criticism there, as describing a mis-match between typical aspects and her personal preference.

Combining all those ideas this flavored blend doesn't seem noticeably more astringent than the other version but there is more malt to it (just a little), and more mineral undertone.  I do like it better; those differences seem positive.  It would probably still be better for bumping the star anise effect a little by tossing a star, or half of one, into an infusion device along with the tea.


Other experiences with flavored Thai tea 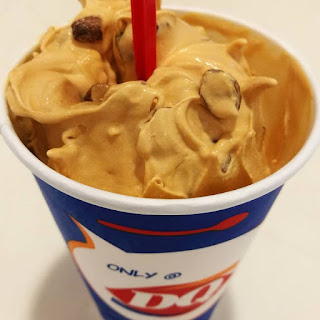 I'll start with my favorite:  the local Dairy Queens ran a promotional extra flavor of Thai tea blizzards for over a month earlier this year.  Those were amazing.  It's for the best that they stopped offering that because I was eating too much of it; I couldn't walk by a branch without buying it.  That flavor just balanced perfectly with that soft-serve ice cream.  I did my best in suggesting that Dairy Queen offer it in the US (trying to help you fellow American readers out), but of course DQ did what any large corporation would do; they never answered back.


Coffee shops tend to sell iced Thai tea versions or blended ice versions, probably with cream content bumped up a little with use of half-and-half in some cases, and soft serve ice cream was just the next logical step.  This mix would also work well with milkshakes, although it would be tricky to get that right, since you don't tend to add any water to milkshakes.  The powdered tea version would have potential for that but adding powdered milk to ice cream also seems odd.  However DQ did it they got it right.


I've also had a Thai tea version made in an espresso machine before, twice, as I recall, but probably other times I'm forgetting about or didn't notice.  That works better than one might expect, although I suppose it's not ideal.  That steaming process stripping out astringency from the tea without really getting all the flavor doesn't matter as much with Thai flavored tea since the artificial flavoring is part of the equation, and since it all needs milk and sugar to work anyway; those make it balance.


The only time I've tried a nespresso version of any tea was a Thai flavored tea, which wasn't very good since I tried drinking it without milk and sugar (at a Bangkok convention / expo).

I would definitely recommend anyone into tea to try Thai tea.  I wouldn't drink a lot of flavored teas myself but it's an interesting and pleasant way to mix up the tea habit a bit.  Here in Bangkok those can be bought in any coffee shop but this commercial loose product is also a decent version.
Posted by John B at 8:41 PM