I mentioned meeting a local online friend here in Bangkok awhile back, Sasha Abramovich, and he passed on this tea to try.  It's another Assam version, from a relatively new producer I've heard of but hadn't tried tea from.

I'll cite more from discussion with that vendor and producer at the end, but the prior Assam producer themes repeat.  They're ramping up orthodox tea processing quality level, and branching out into exploring different distribution options, with fair trade and sustainability issues as background.


The tea is nice.  I have to recalibrate a little to get back to expecting an Assam profile versus the Chinese black tea range I've been on but this is actually sort of in the middle style-wise anyway.

I'm not always clear on parameters but that may help explain what I mean related to the infusion transitions in this case.  I'm brewing the tea completely Western style, in a standard proportion, using boiling point water (or at least near it; it's easy to lose a little temperature along the way, even related to a factor like not pre-warming a device).  I'm brewing around 4 grams of tea (a lot, to some, but for me using 1 1/2 times that much sometimes comes up, if the intention is to use multiple shorter infusions), to prepare a full mug of water, probably slightly over 8 ounces (on the order of 250 ml).  I tend to like to make three infusions of tea brewed between 2 1/2 and 4 minutes made that way using black tea leaves, adjusting timing and count for leaf type, and for what I feel like drinking just then.

If someone only considers using 2-3 grams worth of tea and a cup of water as Western style brewing then this is a hybrid style instead, but to me variation within proportion still fits under that category.  Either way, what's in a brewing-process name.


The taste in the profile includes malt but it's not as pronounced as in most Assam versions, not really dominant.  The general character is softer, more complex, and richer.  It's still not exactly like a Chinese black tea, even though that is a little towards a standard Chinese black aspects set from what I've tried of Assam.  Those mostly exhibit malt first, and everything else is secondary.  Some varied versions included more fruit (citrus) and mild pine-like flavor, and this isn't completely different, just not exactly either.  A flavors list might help.

I'm noticing some malt and pine, balanced as the two main elements, but not dominant.  There is plenty of sweetness, not necessarily easy to place, not clearly tied to a fruit flavor, and not paired with a separate standard taste range like cocoa or toffee either.  It's just a little sweet.  The softness stands out as much as anything else; the feel is full but the overall effect is soft.  The tea comes across as richer than it seems that flavors list would; it's not dry or rough at all, a bit full instead.  The flavor is generally clean, but some other woody tone drifts slightly into a trace of fresh cardboard, which overlaps with the pine aspect. 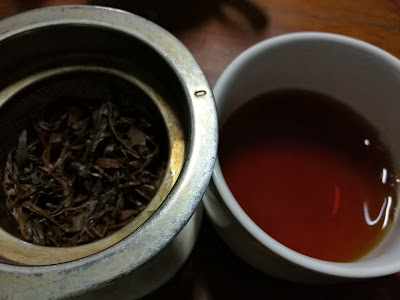 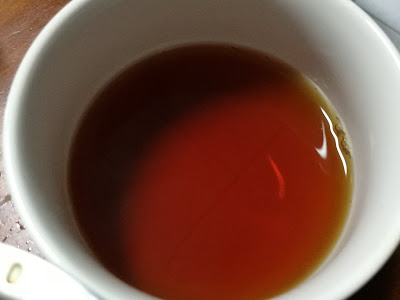 It's interesting the way that all comes together.  It does taste like a very soft, sweet, complex version of an Assam, but towards that other range so much that it's not typical of others I've tried.  It's good tea, but "good" is relative, and it would depend on preference match how good.  More than that wood / clean cardboard throwing the flavor off trading out the typical yam, roasted sweet potato, cocoa, and toffee in different Chinese black teas for pine and malt is a potential drawback.  The complexity is good, and the feel is full enough, it's more a matter if it matches what someone likes.  The touch of citrus in some other Assam, and often present in Darjeeling, might work really well in this, but it's not one of the aspects expressed in this version. 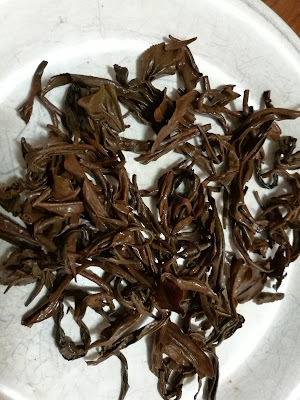 That softness works well but for some others just a little more edge might give it better balance.  To me it's one more nice way that black teas can be, but that is a judgment call.  If someone loves Assams but finds the malt a bit much and has trouble finding one smooth enough this tea could be perfect.  Different people could miss the edge, or just prefer the other flavor aspect range more common to other tea types instead.

The second infusion is similar to the first, just faded slightly.


It almost goes without saying, and it's repetitive since I've already said it, but "malt" tends to be used in a range of different senses.  Malt in ovaltine or malted milk milkshakes, or Whoppers, is smooth and sweet, like a transitioned and sweetened form of mild grain (what that is, I think).  This malt is closer to a slightly dry mineral tone, with some overlap in the two, but also a little like rust.  That's also where it "meets" the pine aspect, which is in between pine needles (maybe red pine, to put a tree to that) and pine cones.


So, long story short, I liked the tea.  I'd be happy to drink lots of this as a daily drinker, and it's complex, balanced, and unique enough to appreciate for what it is on a different level than that, as a new experience.  It's not quite on the level of the best second flush and autumn flush Darjeelings I've tried, where the outstanding uniqueness, clean profile, novel aspect range, great balance, etc. make those stand out from all other black teas.  Per my preferences it's as good as more typical upper-medium quality range Darjeeling, which is quite an accomplishment, just much different in character.

I had talked to that tea producer before, (Maddhurjya Gogoi, who Sasha actually met visiting Assam), just never connecting relating to trying a tea version.  We talked again and he provided more input about his business and company theme.  This Youtube video is a personal and business profile of sorts, with the rest here a text version in his own words.  As for contacts he's on Facebook, with another business page there, and a website contact here.

The rest is in his words, background on him and his business from discussion.  This runs a little longer than I usually cite from discussion with people but to me the personal story is interesting, and it highlights how deeper issues play out related to Assam tea production transitioning from one more limited process to a range of others. 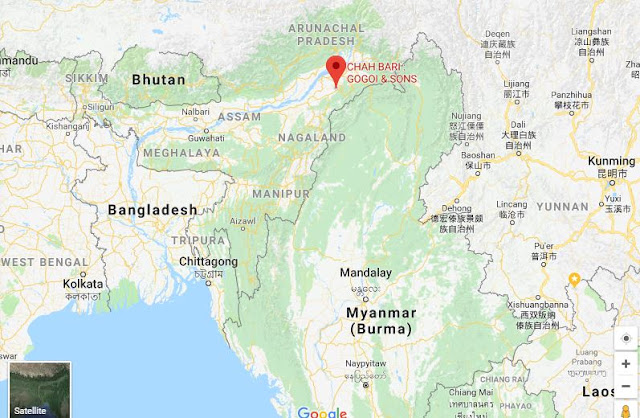 Our Father was diagnosed with colon cancer back in 1994. It was a real hard blow in our family, and we were so broke with his expensive treatment that we could not take care of our small Tea Farm the conventional way with proper input of Chemical fertilizers, pesticides etc.

Actually his cancer was a blessing in disguise. Otherwise we would never know about Organic Cultivation.  Father was asked by the doctor to take Green Tea as a supporting medicine. In 1994/95 no one knew about Green Tea. So as expected, our Father use to get inside of his Tea Farm in the morning or daytime and chew some fresh Tea leaves as Green Tea.

Then on his check ups in 1997 the same doctor gave him few small packets if Chinese Green Tea.  Then only we all came to realize that there are different tea apart from our regular CTC Teas.  So we did many trial and error steps to process our fresh tea leaves in to drinkable Green Tea...

In 2007 I visited Japan and South Korea as a member of an Indian Business Delegation.  It was FOODEX2007 in Tokyo, where I gave my Green Tea to few Japanese and Chinese Tea merchant. To my surprise, they appreciated my efforts and one Japanese fellow ordered 60 kilograms of our Green Tea as a first initial order, which I couldn't execute.

Many years passed and I too closed my Entrepreneurship in Tea.  I become a Stock Broker and lived a happy life.  But during early 2013 my father convinced me that I should do something for our own fellow farmers and for our society since I am lucky to be exposed to the world, and I had experienced possibilities.

So in 2014 I travelled for three months  in Europe with my Teas again. And what a response!!!
I sold my Black Tea in Germany for 60 Euro a kilogram.  That was the turning point. I studied Export Management, having always wanted to be an exporter.  Then in March 2015 I went to Taiwan in search of Small Tea machinery.

Again in October 2015 I got the opportunity to visit Xiamen Tea Fair.  As I said earlier I am really blessed that I could travel far and wide despite I belong to middle class family background...  Then again in 2016 I joined Shana Zhang's ITA for a Tea sommelier course.

Now I am fully focused on Tea and Organic Sustainable Farming practices. Our business is very small but I am highly focused and now share my experience and knowledge with my fellow Tea Farmers in different parts of Assam. People invite me to Tea workshops and I train them on ethical Farming to get rid of Chemical dependency.  This year I hope to process few hundred kilograms of quality Tea from our own small Farm.  My younger brother is my right hand and we are both continuously involved in the empowerment of Small Farmers and those marginal Tea Garden labourers. We are paying 20% extra wages to our partners (workers).

With our best efforts, we are trying to promote some best Teas locally and globally as well. I am confident that within this year I can double the wage of our partners and stop Tea slavery in our small Tea Farm.

Interesting, to me at least.  It's nice to get to mention Shana's training business (International Tea Academy), since she's the owner of the FB tea group I'm an admin for, International Tea Talk.  I've never had much direct contact with that training but one of my favorite online tea friends and producers shared having generally positive experience with it too.


The health claims part stands out, doesn't it?  I wouldn't be quick to accept that green tea is a cure for cancer but I'm guessing that lots of kinds of tea are very healthy, even if sorting that out through research evidence findings is problematic.  Using organic and sustainable farming practices also sounds good.  And the tea is nice, still within the range of better Assam versions I've tried, but it's always interesting trying varied styles.
Posted by John B at 8:05 PM