Aphiwat Kokhue contacted me though Facebook recently to talk about Thai local teas.  I love that sort of thing, hearing about unusual tea versions from people working locally in production or sales, especially related to Thailand.  Or across South-East Asia, really, and to a similar extent elsewhere too.  Part of my interest in the subject of tea relates to taking related discussion and networking too far (like helping start a Facebook group).

It can be awkward if I agree to try a tea from someone for a review and then don't like it, or if it just seems really unexceptional.  But that usually goes the other way, and it sort of just is whatever it is, more typically positive and a bit unusual.

This post is mostly just a review, not about the story behind that tea.  I might get around to saying more about that part, and it would be interesting given how distinctive the tea turned out to be.  But for now I'll just credit who that contact was, Aphiwat Kokhue Aphiwat (probably only the first two names--funny it works that way on that Facebook profile), based out of the business ไร่ชา 720 (Tea Plantation 720).   The brand name is cited as Gaw Khee Cha instead on the label.  I can only translate the third of those words from my knowledge of Thai and I doubt that would be helpful to many readers.  That listed Facebook page location is getting pretty far out there in the Chiang Rai area; that's probably where they really are located.

I don't know for sure that this tea is made from those young, conventional farming style plants in that photo.  There would be older local plant source teas around, they just may or may not be in that area.  I can't tell from photos if a tree is a tea plant or not, not without cross-referencing and some degree of uncertainty even if it's a close-up of the leaves, but pictures in their page do show what look to be older source tea plants: 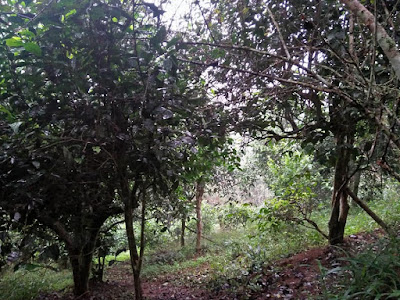 At any rate I'd need more input from Aphiwat to know more about the background of the tea that he sent.  I suspect this wasn't from young tea plants, but it's as well I don't add to that, since that's a wild guess even compared to the typical baseless speculation here.  I can describe how it was brewed though, and probably will get around to discussing it more with him, and maybe trying later tea versions.  It's guesswork buying tea off chance online contacts who mention producing it, since there is no way to know what would show up if you did, but trying a version narrows things down a little, and the tea was pretty good.

It's odd leaving it at that, since I have talked to Aphiwat some, in spite of there being a language divide.  We didn't talk about ourselves but per his profile he has kids, and as a parent that one factor means a lot to me.  I respect people who take on that really important burden, although in a different sense I also respect people for not choosing that path.  Per the photos in his profile he is a Thai local in a completely different ethnic sense, part of a native Thai community, referred to as from a hill tribe.  That expression includes no negative judgement or connotation, not in my use here or in general in Thailand, it just describes background.  It's an interesting background story, to me, which means more to me personally than it makes sense to go into. 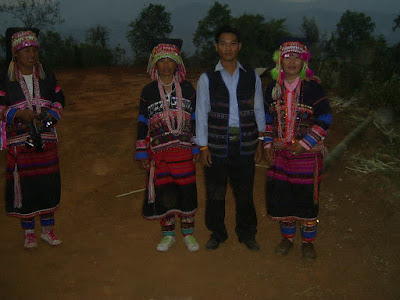 I reviewed it along with a Farmerleaf version I just bought, listed here as Spring 2018 Jingmai Sun-Dried Black -- Short oxidation (which of course is a reference to an area in Yunnan).  I can definitely judge how much I like a tea without direct comparison as an aid but that does help isolate where aspects stand in relation to another, and doubles the review pace, in a sense.

Here is some of their product description (William's, surely, who posts really interesting tea production background on Youtube worth checking out, with this discussion of Yunnan black tea styles and a video on black tea processing especially relevant to this scope):

...As far as black tea goes, these leaves can be considered lightly oxidized. The tea soup feels very vivid and has an interesting depth in the mouth. The fragrance is complex and keeps coming out as the session goes.


Their black teas vary but I always like them, so I wasn't worried about that part.  The role of the Farmerleaf version in this was to serve as a positive benchmark. 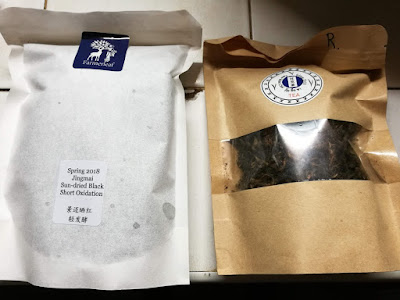 
The Farmerleaf version is a little light the first round. Character that does show is nice, sweet, rich, and complex, but a description will work better next round. Earthiness might be centered on a sweet version of leather in this round, not bad, but adding complexity to that would help.

The Thai tea is also too light to review, but interesting. Sweetness is less, with an unusual wood tone incorporated, more in the range of sawdust. The main basic flavors are rich, earthy, and sweet but there is also a trace of sourness. It will make a lot of difference if that part passes or develops.

The Farmerleaf version did add a good bit of complexity and depth on the next round. This complex profile could be interpreted in lots of ways, as including cocoa, dark wood, leather, and spice, towards cinnamon but more a root spice, or else a range. Even a little dark cherry wouldn't be a stretch.

The Thai tea version is more complex too, and better balanced. That hint of sourness has largely faded, transitioning to other range. It's woody in a different sense than the other tea, not an aromatic dark wood but more an aged hickory or oak lumber, so like a newly built barn. There isn't the same level of cocoa or spice or sweetness, but the balance and character works. The earthy depth is filled in more with a clean version of forest floor. 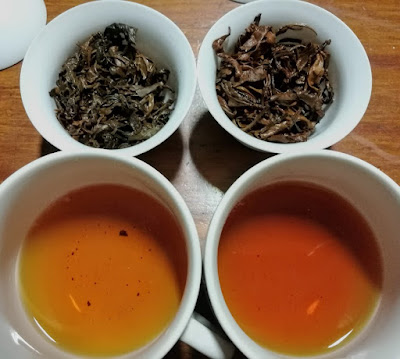 On the third infusion more of the same for the Farmerleaf version. With just a little more cocoa or fruit this would be great, but it's quite pleasant as it is.  The flavors are clean and the overall effect is balanced and positive. Feel is pleasant, just coming across as a little thin to me for being on sheng range for so long, with the same true for aftertaste. Those don't tend to have this catchy and easy to drink character, but this gives up complexity.

Fruit is developing in the Thai version; it's different and better. The specific fruit range isn't familiar, towards a warm version  of berry, which could be interpreted as blackberry, extending into roasted sweet potato. It's completely clean in this range, not sour or muddled at all. The wood tone is onto how a fall forest smells, more like damp sticks, but a clean version of that.

On the next infusion the teas were about the same so I skipped a round of description (three, for the Farmerleaf version; it's staying consistent, which works). It would be possible to brew this Western style, of course, to change proportion and timing to brew 2 or 3 rounds instead. I'm using between 15 and 20 second infusion times, strong for other teas but it works for these, mild and approachable as they are.

The Thai tea is shifting a bit. That fruit is a little towards grape now, but an earthy and sweet version of it, like Welches grape juice, with a touch more earthy range. It remind me of the fruit taste from a local grape plant version at my great grandfather's house. That dark purple grape version was unique and pleasant, thick skinned with a lot of seeds, with a very rich grape flavor. On the next infusion this Thai tea version flavor deepened just a little, with some of that grape flavor moving into raisin instead.  Both teas brewed more rounds but I left off the notes at that point since they were mostly just fading.

Halfway through I had been ready to conclude that the Farmerleaf tea is good but could be slightly more intense across some flavor range, and the Thai tea wasn't on the same quality level but had some redeeming character.

The first part still works, but in light of this Thai black tea transitioning positively across late rounds it's better than that, and even more unique. It's probably a couple slight processing shifts away from being really exceptional tea, but it's nice as it is. It had been about as good as orthodox Assams tend to ever be (in my limited experience), but with that late round positive transition complexity it's at the top end of that scale instead.  It's seems possible that the Farmerleaf version might have lost some intensity over roughly a year of storage; sun-dried black tea versions are said to gain depth and range and oven-dried versions are supposed to be best after a couple months of rest, and then just fade after that.

Of course preference for aspects shifts interpretation. That Gaw Khee Cha version was earthy in a range that not everyone might love, especially before it transitioned to show more pronounced fruit, but even that part worked well for me. The Farmerleaf is more standard for decent Dian Hong character, which to me is not trivial since I love those teas. It was less novel (to me, having tried some of their Dian Hong and others in the past) but it might appeal to more people.

This experience reminded me of trying a Phongsaly, Laos area black tea version passed on by Somnuc Amnousinh not so long ago.   That tea was distinctive, with a trace of rough edge, but much better than more standard type teas for having more unique positive range, higher in quality than such locally produced teas might typically be.  I remember thinking when I tried that tea that I wouldn't really mind drinking a kilogram worth of it, and I think this Thai tea could work as a much better version of a black tea daily drinker than any grocery store in the world sells.


Right at the last moment Aphiwat got back to me with more detail on what the tea actually is; just in time (or just after I hit "publish," but an edit before anyone reads this is the same thing).  He claimed that the tea plants (trees) are estimated as 700 years old, sourced from a growing area of approximately 1200 meters in elevation.

I might have said what I only implied; there is no way this seemed remotely close to being made from young-plant source farm grown Chinese or Taiwanese (variety Sinensis) plants, and more the opposite of that whole set of factors.  The size of the leaves alone almost settles it.  One could take that 700 year old estimate with a grain of salt, since per my understanding it's only hearsay, but the sources are almost certainly from older tea trees growing in a relatively natural conditions.  It seems to go a bit far to claim that there's just something about the end result from that type of starting point that stands out, but at the same time that's exactly it.