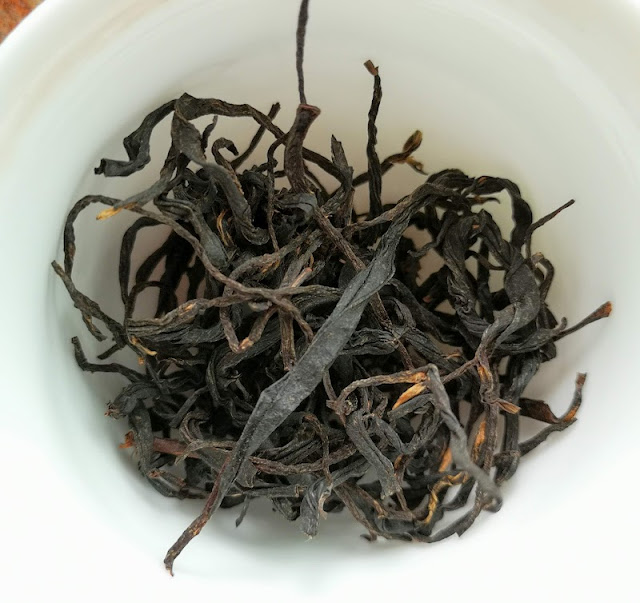 I recently met a local tea enthusiast and vendor, Britt, who owns Treehouse Teas here in Honolulu.  I'll go back to Bangkok soon to clear up some details there, but related to the last post here I'm in the middle of a transition to move to Honolulu.  My kids are in school here, so parts like that are already in place.

It was nice talking some about Hawaiian teas, and local tea culture, and tea themes in general.  We didn't visit for so long so this post isn't about much of that, more just a tea review.  So far, per my understanding, there isn't a lot of unified tea culture throughout Hawaii, beyond the producers on Hawaii, the Big Island.  Even there it's odd seeing inconsistent products coming up, as many tea and tisane blends as pure teas, and not much for unified local styles.  All the same, good tea is good tea, and I bought and reviewed this one version of it.

I've never tried any tea from Hawaii.  That's not true if one uses the broader definition of tea as including tisanes, since local "family" here has shared versions of herb blends, which I have reviewed here.  But this black tea is my first "real tea" from Hawaii.  It's exceptional, a good start.

There's a lot that I could add about how life goes here, since that "moving to Honolulu" post was only about the first week or two.  Not much has changed though.  We've pushed past the earlier round of only setting up an apartment, cell phones, and schooling onto sub-themes like limited job hunt, getting health insurance sorted out, and doing more with local events.  Seeing a local parade was nice, and helping with preparing a float for that, more just visiting with our local uncle who was involved, Al, was even nicer.

I suppose it feels more like home again here, more natural.  My kids are better grounded; that's always been more of a concern to me than how I take it all, or what I gain or lose for routine experiences along the way.  Of course the beach is amazing, and we just did a first local hike, the most classic version up to Manoa falls.  I suppose those things don't have much to do with it feeling like home, or truly integrating with local culture.

About Britt, she is so nice.  I mentioned losing a tea pick for stupidly packing it in a carry-on, and she gave me one, and a couple other teas.  It's great how real tea enthusiasts often love to share, even when selling teas requires careful planning and sales volume to turn into a productive business.

On to discuss this tea then, and I'll add more about how other scope goes visually, as a series of pictures at the end.  It's a black tea, identified as "2022 Spring Harvest "Bo Peep" black tea from Volcano, Hawaii."  That doesn't even include a producer, so I looked it up on the Treehouse Teas website:

First Steeping: sweet chocolate and rose come through in the first sips.

The hands that make it:  Jim Chestnut & Edna Arakawa of Second Alarm Farm

That lists for $29 for 20 grams, which might sound like a bit much, until you factor in that supply and demand issues shift wholesale prices for Hawaiian teas into a relatively high range.  This is nothing like the case of US vendors selling Chinese teas along with a catchy story, bumping pricing from high at wholesale level, but still moderate, to a much less reasonable range, justified by the stories.  If the stories are true that's still a fair practice, but not all of them are, or are even meaningful.

I'm in Hawaii now and for sure the local costs for everything are unusual, for land, labor, and any and all other inputs.  That cost doesn't sound bad.  I wouldn't regularly buy teas at or over $1 / gram but at least this one has the right kind of back-story as partial justification; on to whether or not experienced aspects keep up with that. 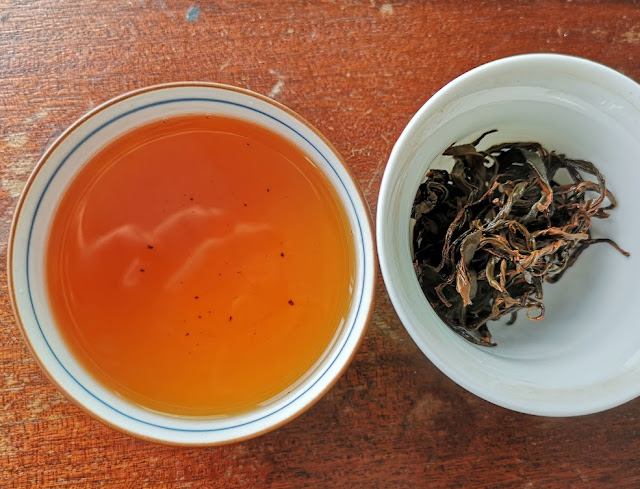 First infusion:  rich, complex, balanced; it's nice.  This will even unfold a bit more on the next infusion, surely.  Cocoa notes stand out, but there's a familiar savory sundried tomato range as well.  It's quite good tea.  I've drank a lot of exceptional black tea, so that's not unfamiliar, but this is in the better end of that range. 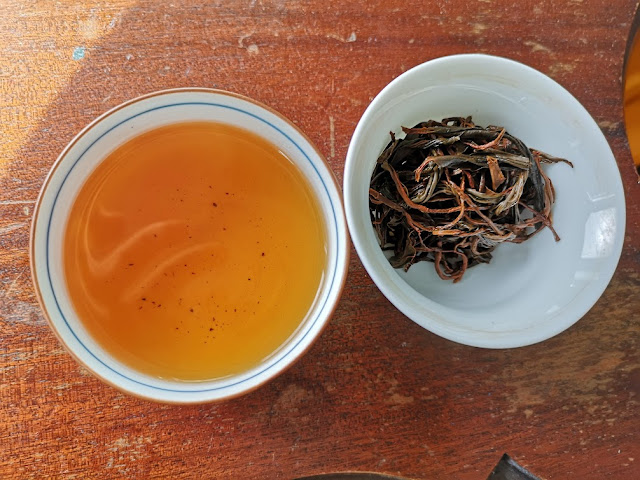 Second infusion:  it did improve, deepening and adding complexity.  This won't be the typical 8 infusion cycle review because I backed way off the proportion, probably using 4 grams or so, versus a more typical 8.  After two more rounds it will probably already be fading, since I'm brewing this for 20 seconds or so, instead of the usual 10 or less.

It's interesting how rich cocoa (cacao) flavor, along the line of dark chocolate, combines nicely with a savory range, and other scope.  It's towards floral range, the rest, maybe also including aromatic wood or spice tones.  There's a lot going on.

Sweetness is good, plenty of it to balance the rest, but it's not an overly sweet version of a mild and flavorful black tea.  It's intense in terms of flavor expression, only mild in relation to missing the astringency edge common to some black tea range.  The tea being whole leaf alone offsets most of that, but some astringency can still come through.  It has enough structure to give it nice feel, which relates to that edge of dryness that is a different, sharper, and stronger version of the same kind of feel range. 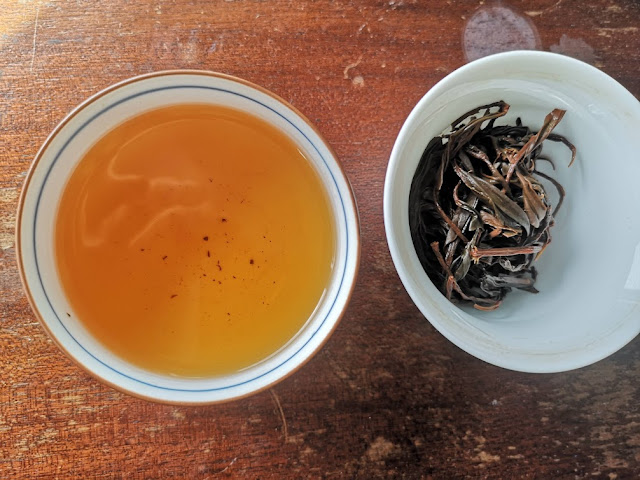 Third infusion:  other flavor range emerges, mostly some orange peel citrus.  Evolving away from the cocoa is a trade-off, but this has a nice balance.  There's an entire layer of non-distinct complexity that adds depth to the experience, but that is hard to describe as specific aspects.  Don Mei would just keep riffing on what that might be, varying interpretations.  A nice mineral aspect is a bit towards copper, but it includes plenty of stone range too, the "volcano" part.  There's an aromatic wood tone, towards incense spice.  Another part is rich in floral range aspects, but combined enough that just one doesn't stand out.  It probably extends to other aromatic range.

This reminds me of an experience I often have running here, something familiar from back when I went to UH Manoa, some years back.  As you walk around some trees will drop large quantities of figs, or seed pod fruit, seemingly similar to tamarind, causing a wonderful, rich scent.  I never do, but you could just lie there, huffing it to maximize the impact of that rich and deep scent.  While running around the park near our house, the one beside Waikiki, the zoo, and Diamondhead, those scents come and go quickly, but it's one more positive part of that experience, along with seeing the ocean, Diamondhead, large trees, and puffy and colorful clouds.  It is sort of a paradise, even in the city, which never really matches the "urban jungle" effect of elsewhere, even downtown, where homeless people ambling about and sometimes shouting offsets the background's ideal nature.

Fourth infusion:  this is brewing out already; 20+ second infusion rounds go through a tea's potential fast.  This is already a $5 round of teas, which isn't really so bad, when you compare that with a slightly pricier and vastly inferior Starbucks experience.  The depth hangs in there, the overall complexity, with good flavor intensity, just not like before.  The savory quality is still there, and the flavor range I described in the last round.  It's great how that citrus tone works well with the rest, filling it in.  I think this will be quite nice for one more stretched infusion, and from there it will thin out quite a bit.

Fifth infusion:  this is fading, but brewing it strong did lead to one more intense round.  Parts have thinned out; how that tends to go.  The complexity of flavors is still there, one of the main interesting parts, and the rich feel, so it has plenty to offer, it's just not what it had been.

It's hard to bring across how good this is, how pleasant.  Related to that vague, emergent part of the interpretation it's really far up the scale.  It can be hard to separate "how good" in an objective sense from personal likes, even with experience in trying to.  To me this is quite pleasant and quite good tea though, and it doesn't give up much in pleasantness or quality level to teas from anywhere else.  It's novel and distinctive too, but that comes up related to teas from lots of different origin areas, just not in this exact form.

Back off the subject of tea, I'll keep this a light read by mostly telling the story through pictures.

This float decoration theme justifies a bit of text.  Meeting Al, Mahina (his wife), and some of his family meant a lot to all of us, but a story from helping decorate the float captures how our experiences here go.

Kalani helped most; she loves art and crafts, and was most assertive about asking how to help, and on the third day there she was excited to have her friend join to help too.  At one point the guy supervising mentioned that they were doing one step wrong, which I took to mean that they should step aside and let others more familiar with the process do that finer detail work instead.  He was quite busy, but he took a moment to clarify that's not what he meant, that they needed someone to look after them and make sure they were guided in what to do, but that they were definitely welcome to help if they wanted.  It would've been easy to say that they should step back and could do something else later instead, but including people who wanted to be included seemed important to him.  It was much appreciated. 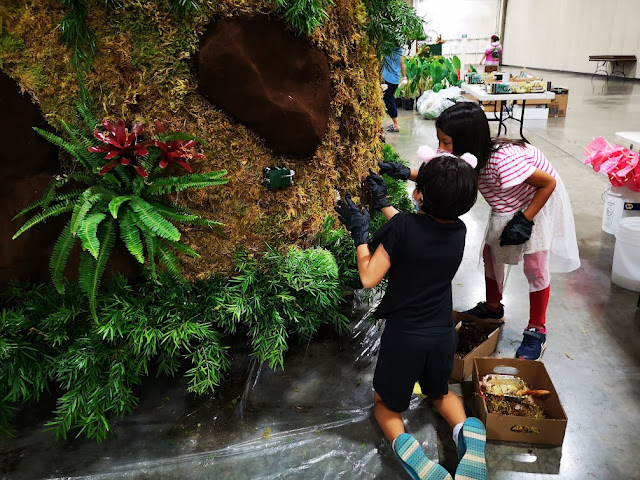 And that's how things go here, over and over.  Unfamiliar steps and contexts require some adjustment on our part, and then friendly and helpful local people make processes that could be challenging work out easily, even though newcomers initiating problems must be a common theme.  There is an emphasis on helping others, which even gets applied to people you have no ties to, to some extent.