So much slacking on the tea-blog posting that I'm writing about two teas I bought last year.  I bought a green and a black tea in Cambodia in October and took awhile to get to the black tea, which turned out to be much better than I expected.  About the lapsang souchong, guess I just never got to posting, even though the tea type is one of my favorites.

The Cambodian tea was sold as a relatively inexpensive loose tea, in a grocery store of all places.

There are universally accepted conventions that good tea isn't sold in grocery stores, and the less a tea costs the less exceptional it should be, so I didn't have lots of hope for it.  The green tea I bought was reasonable, much better than tea-bag tea, perhaps not as good as a lower end dragonwell (not that you could find that in a grocery store, at least outside China).

Right away I was surprised that even though it was chopped a bit it didn't look like CTC produced tea (crush-tear-curl; the machine produced tea you get if you buy low end commercial black tea). 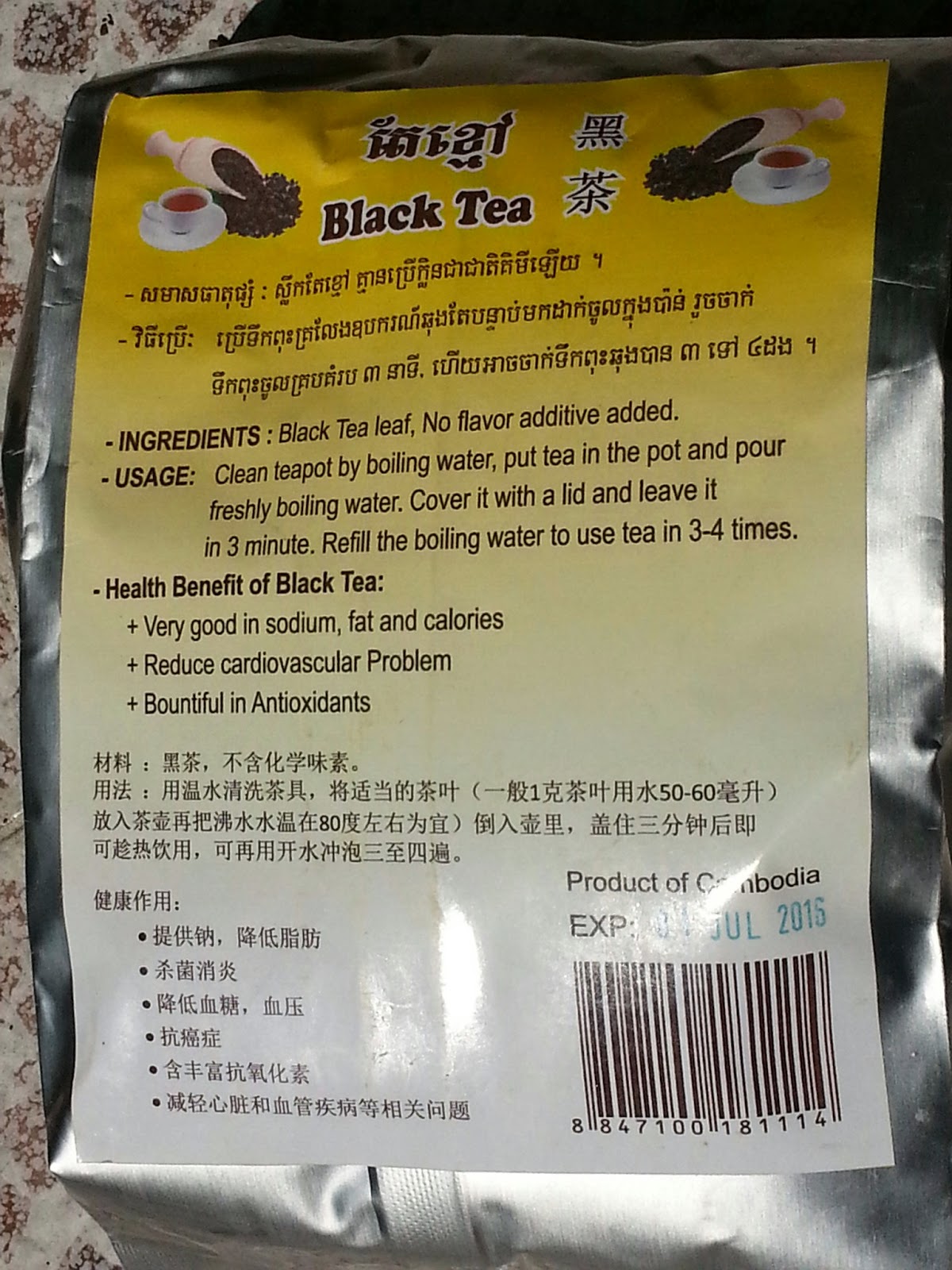 It looked like decent real tea (orthodox processed), aside from having a bit of stick content.  I'm accustomed to packaging in foreign languages (this was labelled in three different ones) so I was happy to see some English on it, but the content made no sense.

The label picture (here, so redundant for me to say it) claims the health benefits "very good in sodium, fat, and calories, reduce cardiovascular problem, bountiful in antioxidants."  Of course the tea has no sodium, fat, or calories, but the water has that same health benefit before you add any tea to it.

Only later I realized it doesn't say how much tea I actually bought.  It looks like about 100 grams, but who knows, I didn't weigh it.  I don't remember the cost but it wasn't much, somewhere around what a Starbucks coffee costs.

The tea is good; I was shocked.  Not great, but it's real, decent black tea, the next level up from anything that would generally find it's way into a tea bag.

I was also surprised the tea had a slight hint of smoke flavor.  It seemed possible they'd smoked the tea to dry it, but then maybe it could be a natural flavor component instead.  It also tasted of leather and wood, with a faint fruit note, maybe cherry, and surely those were just from the tea.

There was practically no astringency, which for me is a good thing.  My general impression was that it wasn't exceptional tea, with slightly muddled flavors and un-refined character, but since I'm a fan of black teas that aren't bitter it worked for me.

Comparison with a lapsang souchong

The slight hint of smoke made me think of comparison tasting it with a lapsang souchong I bought a lot of awhile back.  Of course that tea is from China, but I won't get into background since you can go and read the Wikipedia article yourself, or move onto Google searching.

Lapsang souchong is one of my favorite types of teas due to loving black teas in general and because it's a smoked tea.  The smoke component can sort of make or break such teas; too strong and it's hard to make out other flavor (odd finding one too smoky when you love the taste of smoke, but it can happen), or sometimes the effect can be a sharp sourness versus a warm smooth richness.

That lapsang souchong looked like they generally do, with long, slender, twisted leaves (brewed leaf comparison to the right).

This version was light on the smoke, if anything too light, but then the tea quality seemed relatively high and in the one sense good that tea flavors were predominant.  The main component was a rich malt flavor, coupled with almost no astringency / bitterness, so unusual to have the one without the other.  Some other subtle earthier tones rounded out the flavor, towards wood, maybe even cocoa.

The lapsang had more natural sweetness than the Cambodian tea.  One odd difference was the smoke flavor element was at the front for the black tea, something you'd pick up first, but at the back of the lapsang souchong, more on the finish.  That doesn't mean anything in particular to me, although it seems it might to someone else.

From looking at the brewed leaves (prior picture) it occurred to me the Cambodian tea might have been more oxidized, even though the general definition of black tea is "completely oxidized."

One of the main differences related to subtle impression of the teas, something that wasn't just a taste component, and also not exactly related to the feel or body of the tea.  Somehow the lapsang souchong flavors seemed cleaner, more refined.  It could have related in part to a taste element, since the Cambodian tea picked up an unusual undertone in later infusions, with the wood component shifting towards something earthy and nondescript, maybe peat.  But then who tastes or even smells peat.  Or maybe I just associate malt and cocoa components with a better tea.

I've got a lot of nerve bringing this up since I've tried exactly one Cambodian black tea, but why not.  What it means seems obvious to me, the taste or character that results from a place, but as background here is a bit more on it related to wine.  It could be that I like Cambodian black teas in general but I'd need to try more to know.

I recently tried a very decent Vietnamese black tea with an interesting character (last post), and it made me wonder how much of it was distinct related to where it was made (or plant type, weather, soil, etc,), or if processing made more of a difference.  I tried one--and only one--Malaysian black tea, and a commercial one at that, and I was surprised it was unlike any black tea I've ever tried, smooth in flavor, earthy (really earthy, like that smell of fallen tree leaves in the autumn), with no astringency.

In Chinese teas questions of terroir and growing environment quickly link to those of authenticity.  It's understood that in cases when a certain tea derives from a certain region if the demand is there "counterfeit" versions from elsewhere will be sold as that.  Perhaps it's only hearsay, and false, but one hears that Thai teas can find their way to Taiwan to be sold as tea from there since the types grown and growing conditions are comparable, but the international demand for Taiwanese teas is much higher.

It's a commonly encountered idea that any smoked tea might enable use of that flavor element to mask other shortcomings in the tea.  If you love the taste of smoke mixed with the taste of a black tea that might not be so relevant, in the same way you might not care so much if the black tea used in your masala chai would fare well on it's own; the final result is the thing.

I recently read a description of a specialty coffee vendor that reminded me of this (worst-case tea-blog sacrilege is occurring here in referencing coffee, but why not):

Roasting cheap beans to a dark smoky stage masks the bad flavors in the beans. This allows large companies like Starbucks to get away with buying cheap beans and masking their inferior quality by burning them until all you can taste is the roast.

Nice, zinging Starbucks like that; I think I'd have to try their coffee to really get the point.

That lapsang souchong seemed to go light on the smoke flavor precisely because it was good tea to begin with (all relative; "good" used loosely here), but I would've preferred they'd masked the flavors a bit more with some heavier smoke.  I only ever tried a version that was too smokey once, surprised I could think that at the time, but the tea was so smokey it took over my palate altogether, and the sandwich I ate with it tasted like smoke.

In conclusion both teas were nice, but give me an old-fashioned over-smoked low-grade lapsang souchong over either any day.