I just went to Vietnam (Ha Noi and surrounding, the North) and of course tried some teas.  I liked Vietnam and the teas so much I'll have to ramble and show pictures a bit more than usual. 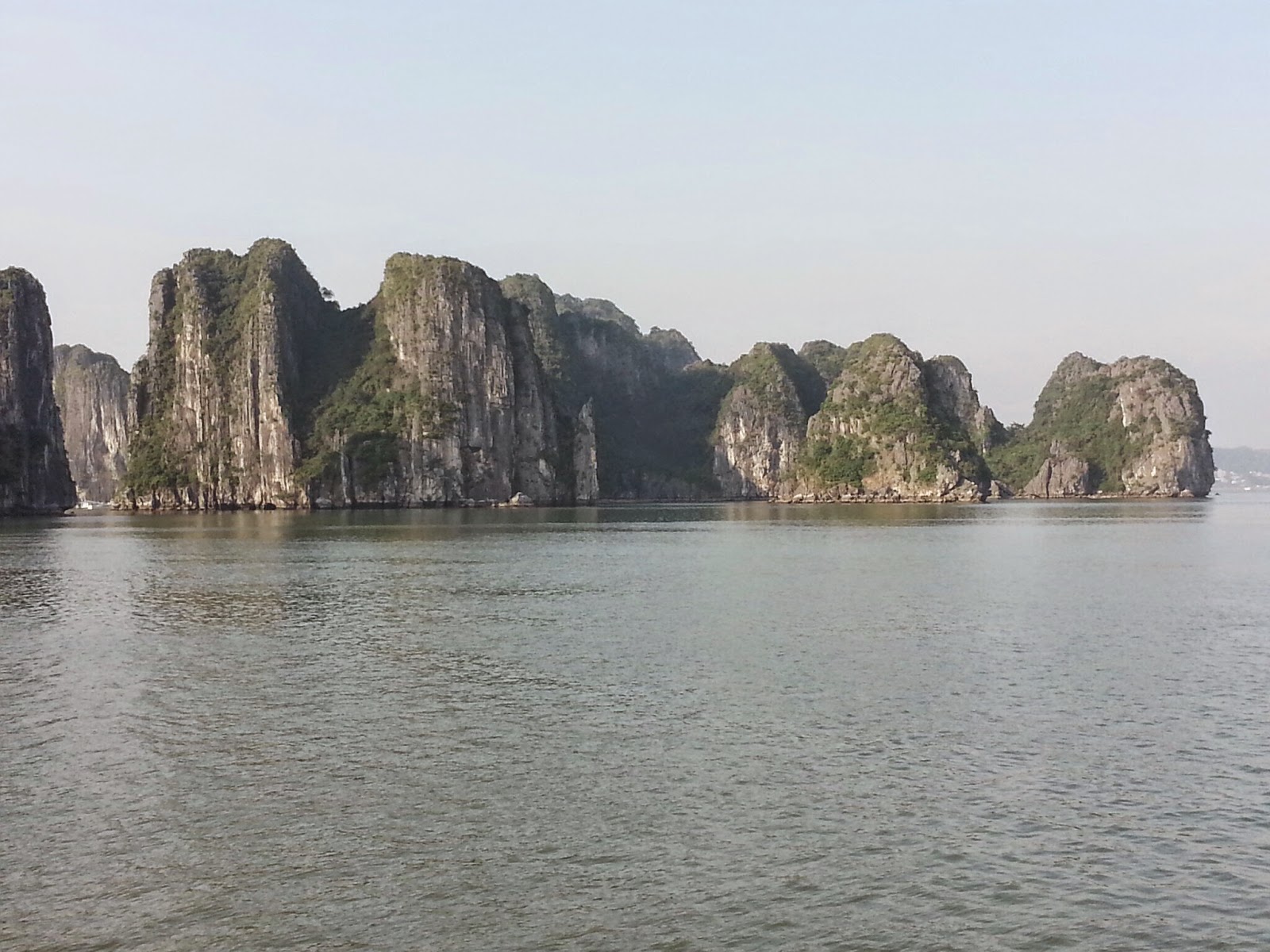 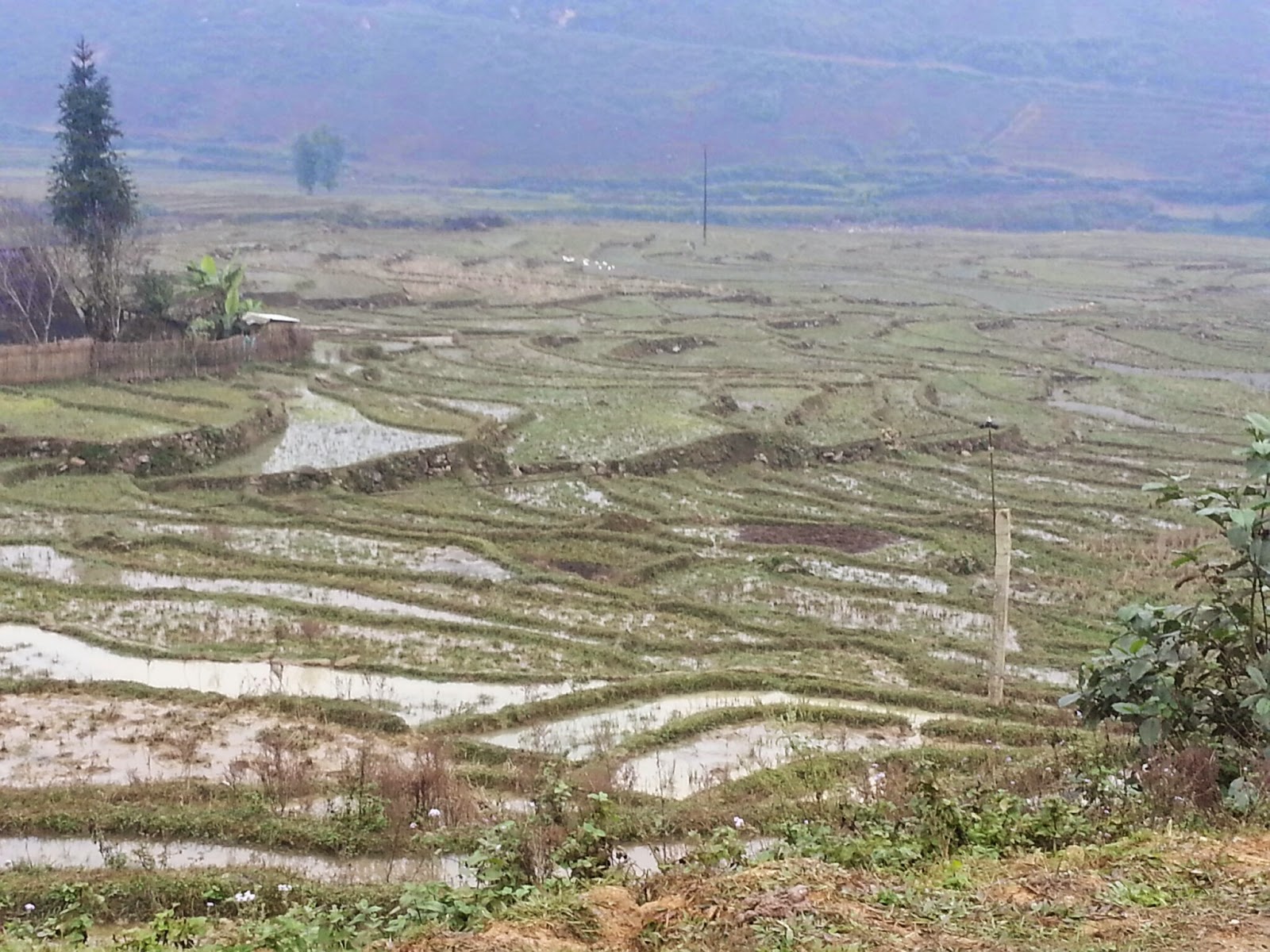 A stunning country (nice even if one doesn't like tea).


What to say about the green teas?  My first reaction was amazement at how fresh the different teas taste.  The one I had today starts off with a really fresh vegetal kale-like taste, which softens a bit to different flavors as you keep brewing it.  The predominant flavor might be the mineral nature, along with the vegetal character that's never exactly grassy, different vegetable notes with a wood undertone.

One odd tendency of the teas I've tried is they just keep brewing consistently good tea, hanging in there infusion after infusion like decent Chinese or Taiwanese lighter oolongs.

Bitterness can be an issue with any green teas, but the twist with Vietnamese teas is some people love that flavor component (astringency, however you put it), at least per one seemingly informed person I talked to about that.  At least one type is even sold as "bitter tea;" not so much of a selling point to me. 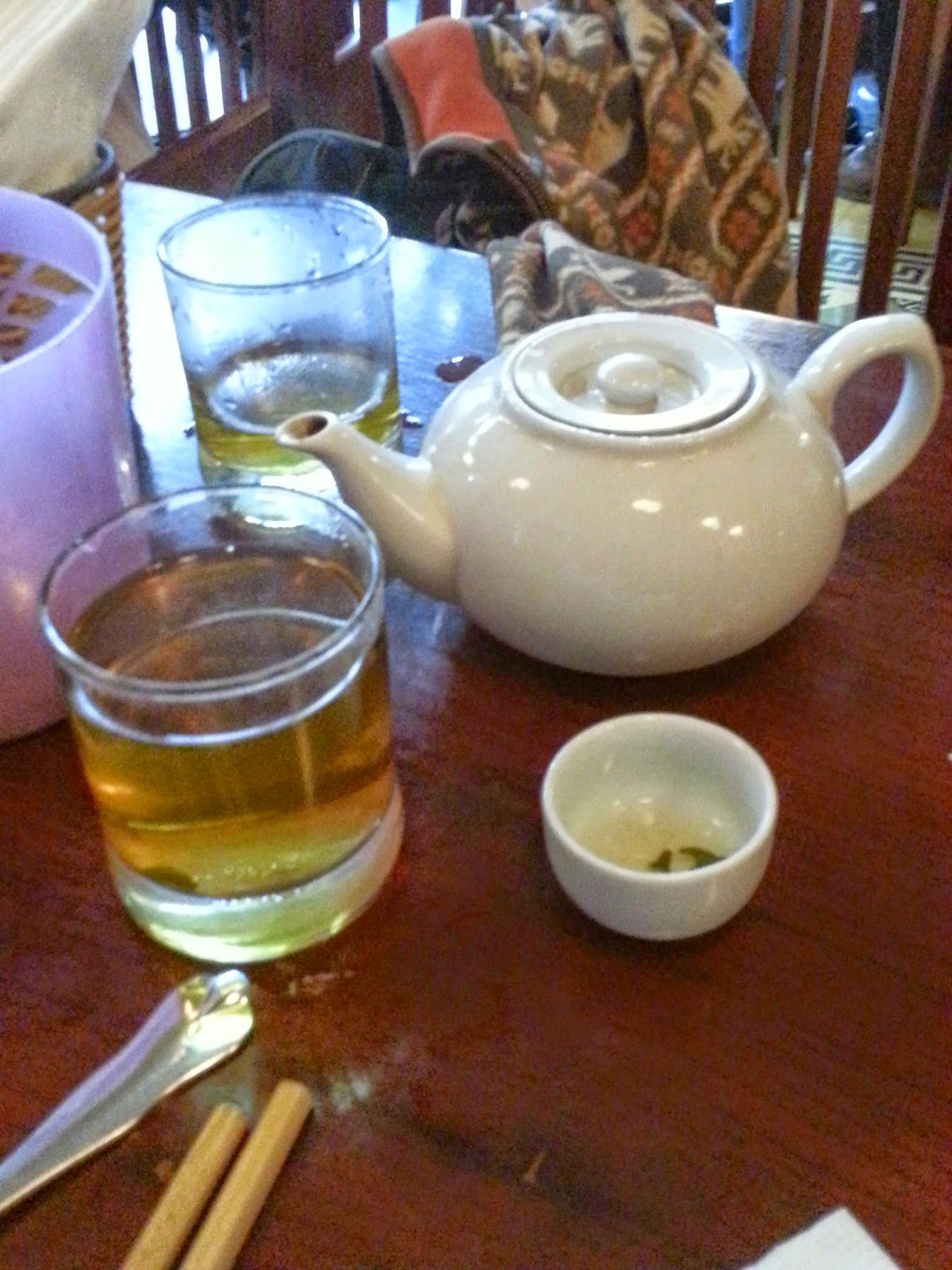 The first time I ordered a tea in a restaurant they brought it steeping in boiling water, which of course will bring out the bitterness in any green tea.


The first taste was really nice anyway, fresh and light, but it occurred to me that continuing to steep green tea for a long time in boiling water wasn't going to end well.  I asked for extra glasses to halt the brewing process but it was too late (pictured here); that wonderful fresh character turned extra-bitter.

Of course I was still intrigued, ready to keep on tasting teas.  This was my second visit to Vietnam but since my tea obsession really ramped up after my last visit (when I was happy to check out tea and herb blends from there that were new to me).  This time I was going much deeper for sure. 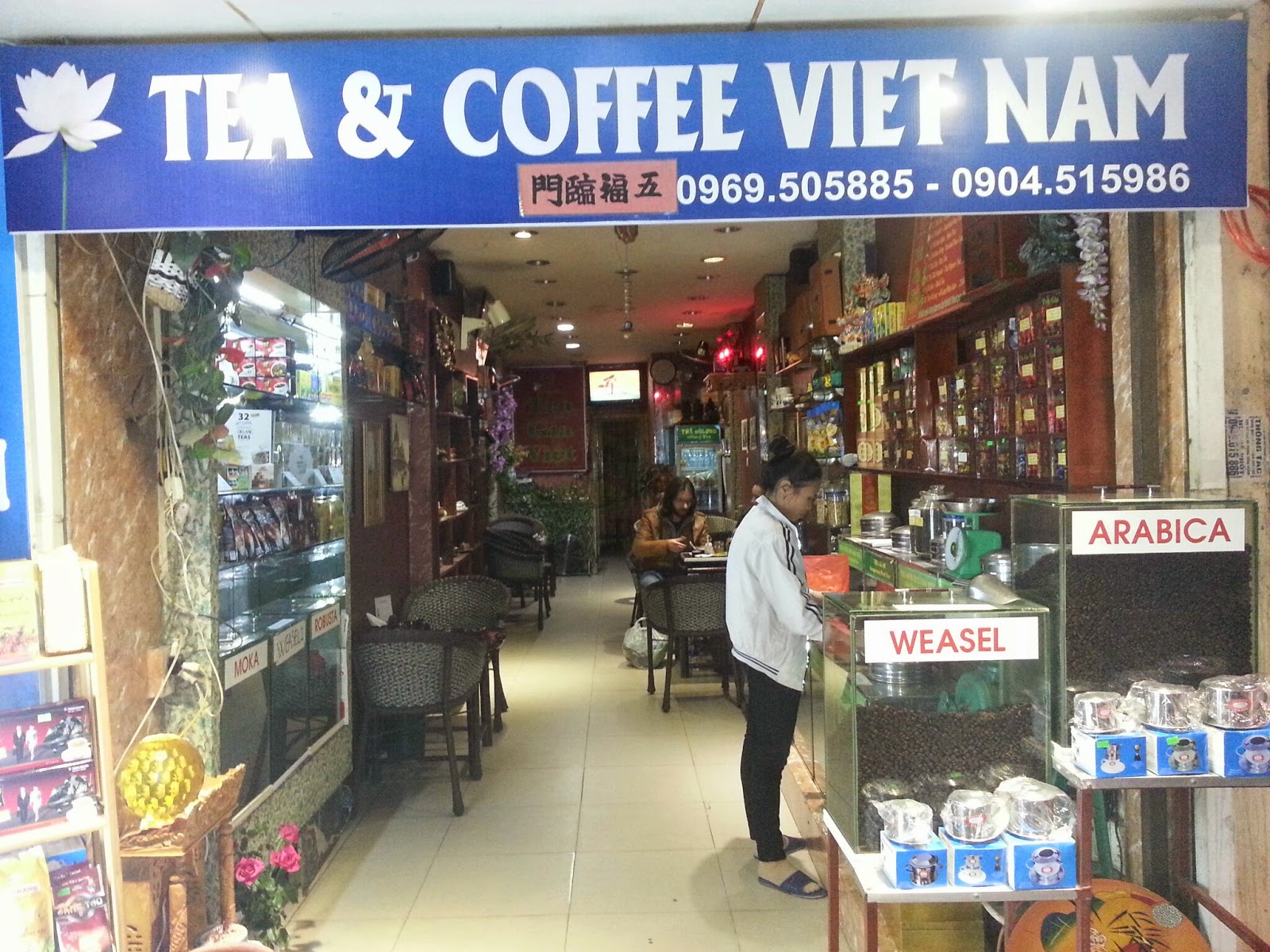 Later the same sort of thing happened at a tea shop, of all places; they were brewing green tea at boiling temperature, and not taking the leaves out of the tea, they let is keep on brewing.  They were doing it on purpose!


Actually I was still in denial about that until a forum discussion after the trip absolutely confirmed it.  Aside from that being odd, preferring bitterness, it seemed a shame to drown out the range of other amazing flavors these teas were capable of. 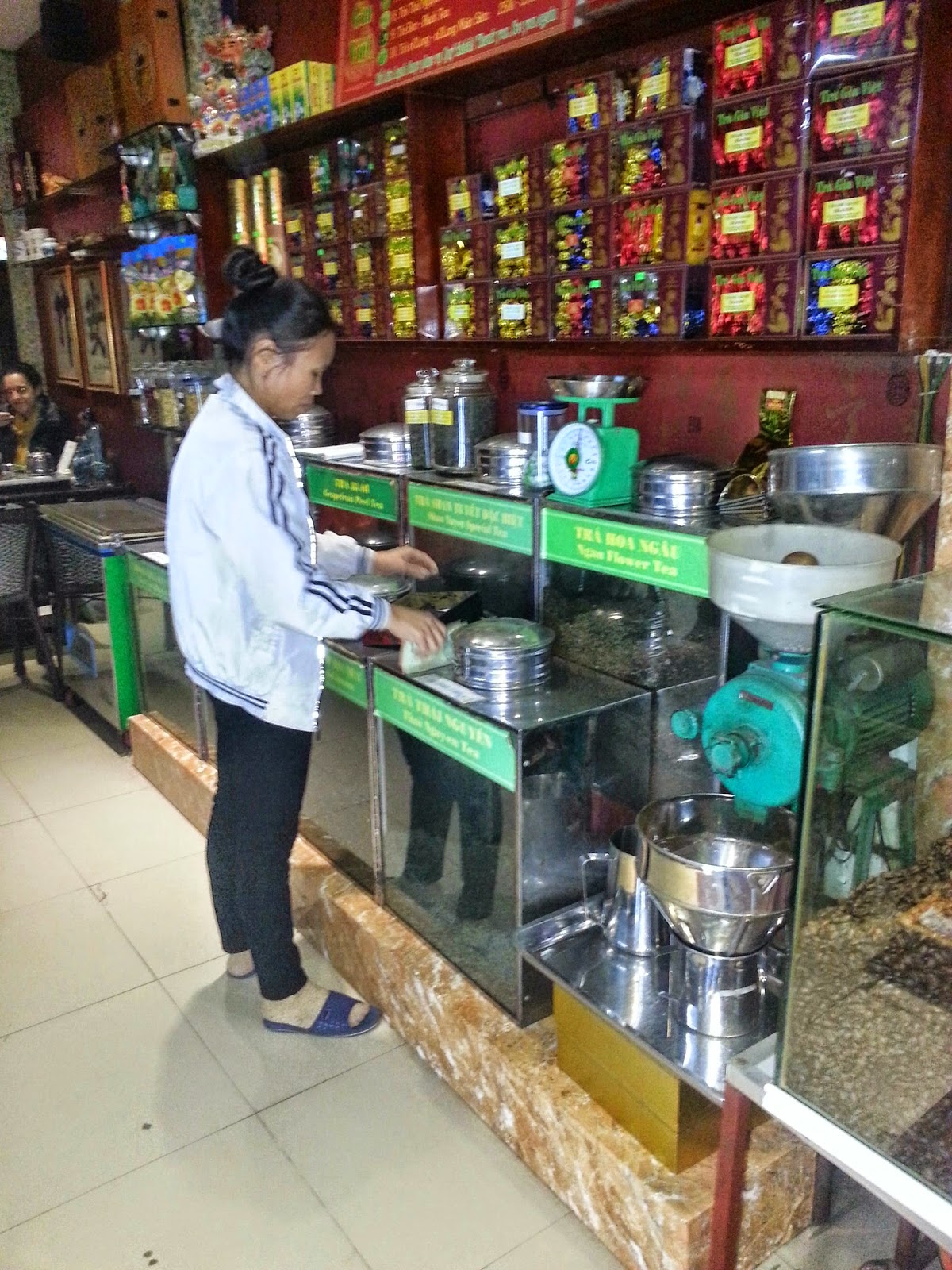 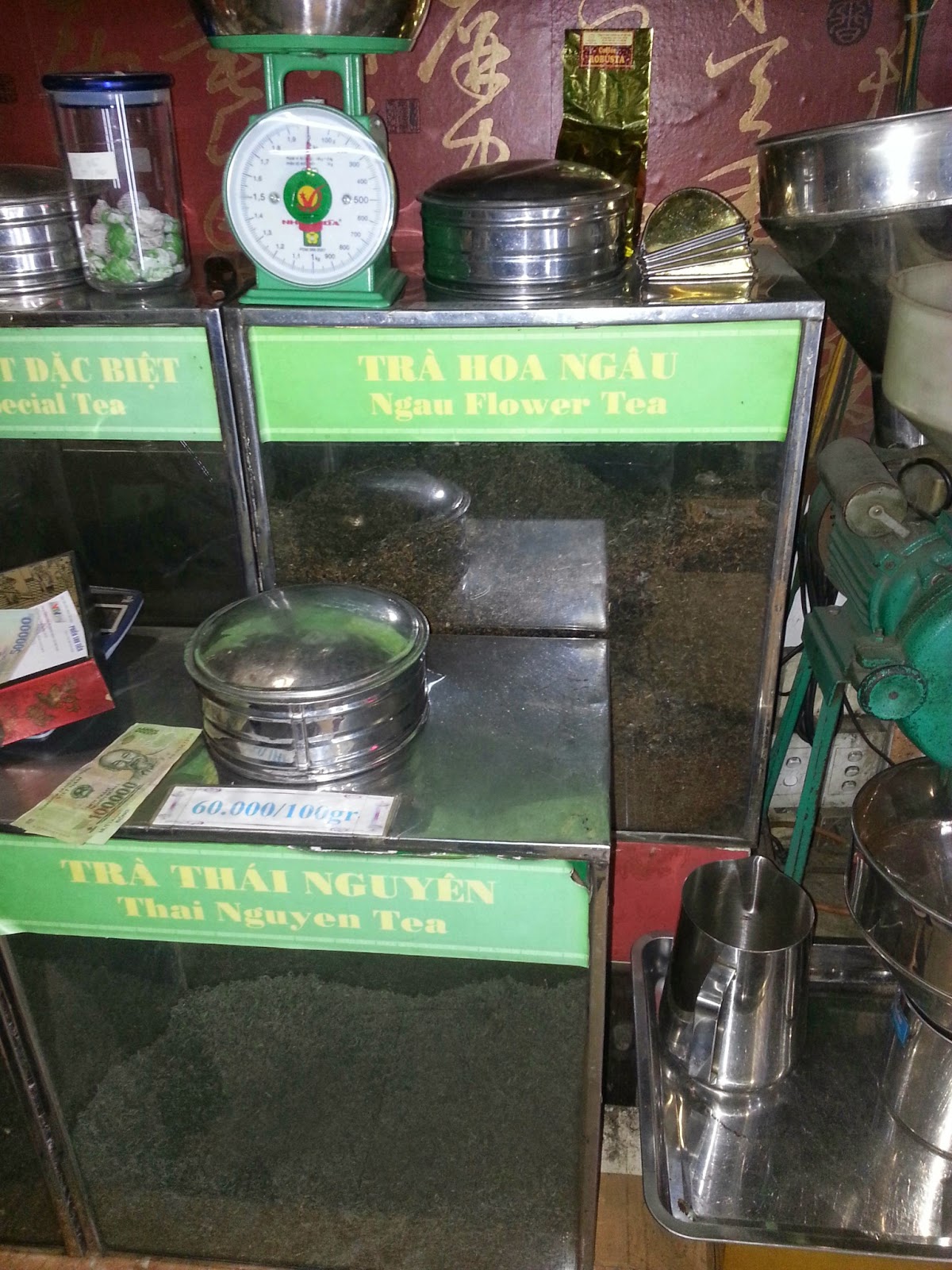 At a shop near our hotel they sold a number of different teas (and coffees) from larger bins, offering the tea by sampling smells.

Only one was a pure green tea (Thai Nguyen Tea--a province name reference), and one other black, and all those others tea flavored or blended with different flowers, and one rice tea.

It would've been sensible to buy them all given that pricing and those smells (that "green tea" bin says 60,000 dong for 100 grams; about $3--almost criminal to not buy the tea).  Tea purist that I am, and given my wife was about to go crazy over all the tea I would buy anyway, I just bought the black and green.  If I'd tasted that black tea instead of just smelling it 100 grams wouldn't have been nearly enough. 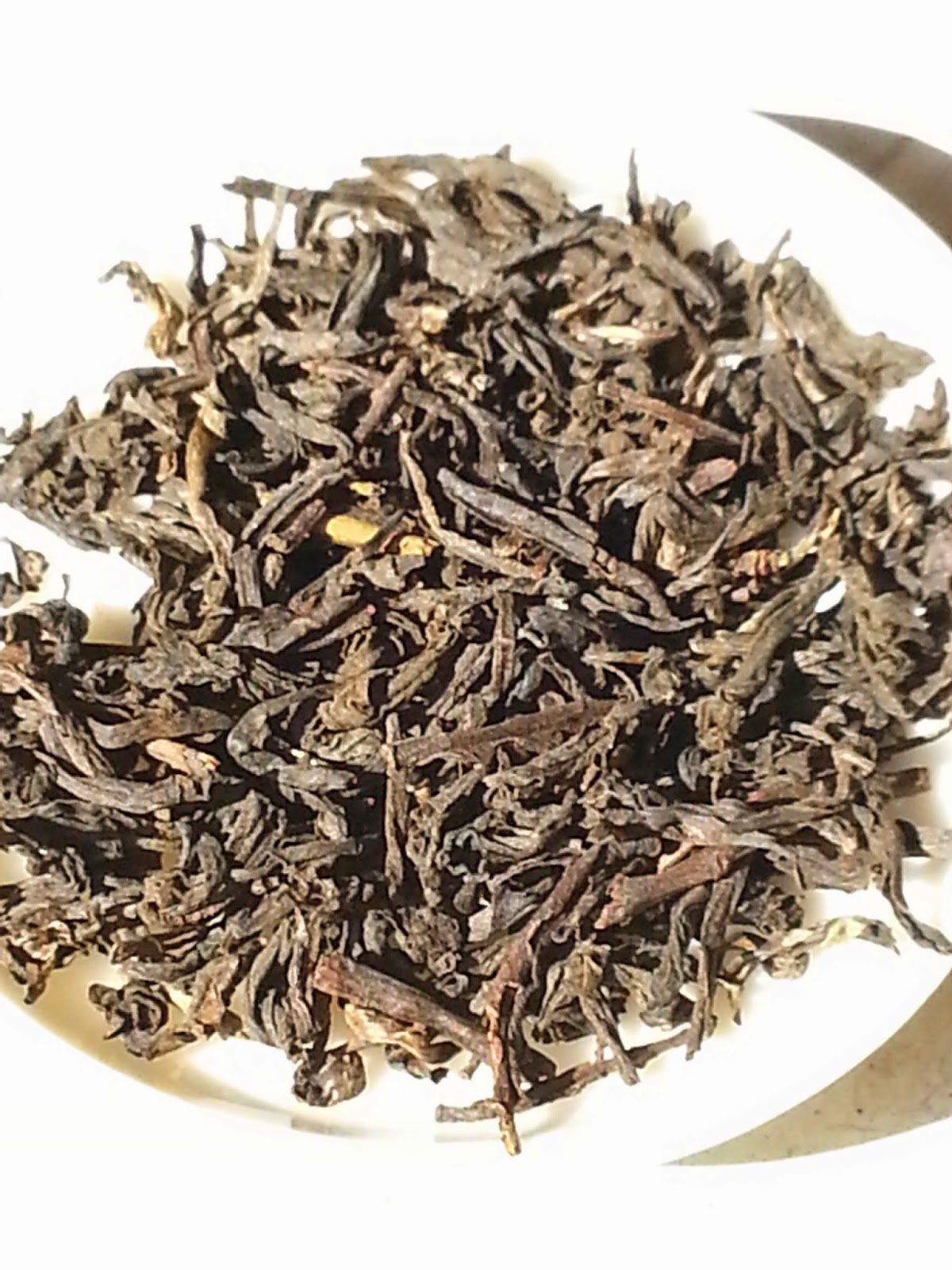 This tea is an orthodox tea, for sure.  You really can't judge quality on smell but at a guess the tea would have warm cinnamon notes and decent malty character.

The first time I tried it (back at home in Bangkok, later) I was surprised at how good it was, a soft, rich tea, with good body, including those taste elements and maybe a hint of citrus and woody undertone.

This was still a mid-range tea, without quite the same subtlety, remarkable "clean" flavors, balance, and complexity I've experienced in some nicer Chinese black teas, but definitely a better tea than most people know exists.  Better than any black Vietnamese tea I expected to find, especially at rock-bottom prices ($4 for 100 grams; I'm going back for sure, even if the airfare does add few hundred).  Oddly it was much softer than a lot of black teas, nice for me.

I kept on seeing more teas, and buying them here and there, almost all green.  I saw a couple oolongs along the way but kept thinking I'd make it to a shop where I could taste them, and see a selection, and dodge buying one so-so oolong and then wondering if it was regional character or just what I bought.  Of course if I'd brewed the black tea in the hotel room I'd have bought one at random and hoped for the same luck. 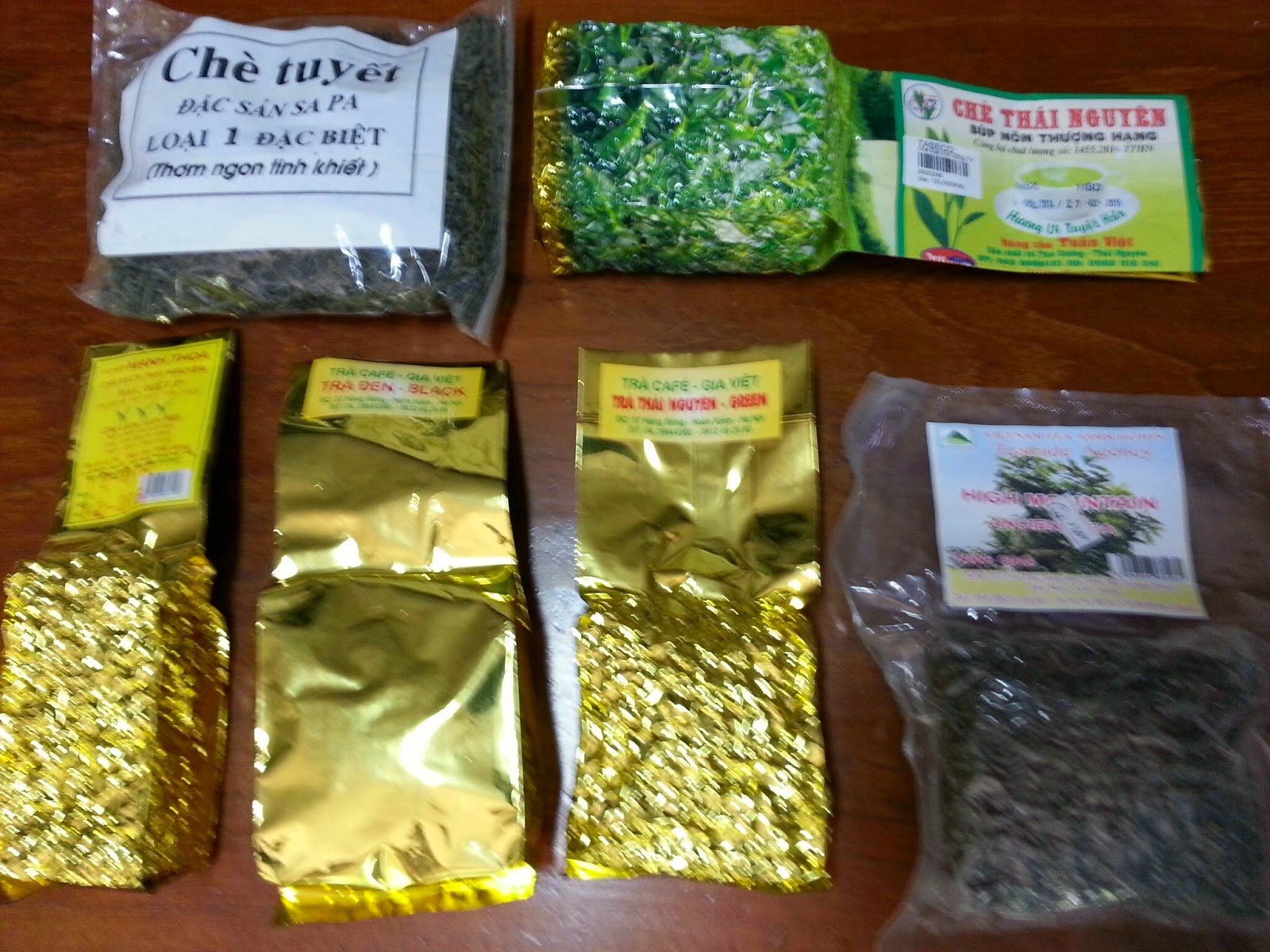 This isn't really where I'll leave off because I have a few more teas to try.  One is an ancient tree high mountain green tea (might be nice), another bought from a local hill-tribe village, along with some dried apple chips and local almonds (which are good).


The herb and flower teas are a different story I won't be telling, but that one rice tea showed a lot of promise (the smell did), and one lotus tea I tried there was quite nice.  So maybe some explaining is in order, since I skipped so much:  it wasn't really a tea theme vacation.


We visited Hanoi, Halong Bay, Sapa (mountains--cold up there), and Tamkok (hills, I guess) all in a week, and wasted precious tea shopping time snapping up great deals on winter gear and kids' shoes (so mundane; every country has that!).  Vietnamese food was an aside worth wasting time on; pho is only the beginning (Asian chicken noodle soup).


It seems likely I never did stumble across the best of what Vietnamese tea has to offer, perhaps not even trying one from the main growing region--Tan Cuong--in that Thai Nguyen province  (review of one such here).  I'll be back.