As far as tea cafes go in Bangkok Double Dogs tea room gets mentioned most, aside from references to "high tea," the British version of a mid-afternoon meal that's more about different kinds of snacks.  I finally visited there, with the shop located in the center of the main street of the Bangkok Chinatown, Yaowarat road.

I'd heard a mix of good and bad things about this place, that the tea was great, or also that it was normal tea and overpriced.  It seemed likely this was similar to the mixed reviews that three star hotels get here; based more on expectations than what the hotels are like.

The shop is in plain site on the main central road but still somehow hard to find.  Google Maps is close on where it is but not exactly right, so based on that you'd need to walk down the block a bit.  My first impression walking in was that the shop is dark, and small, just a few tables.  it looked like they had more private space in back, maybe a separate room, but the front wouldn't seat many. 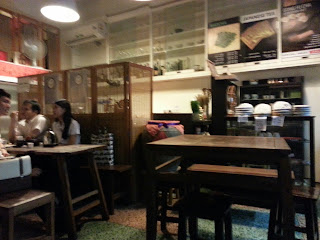 I selected a Shui Jin Gui from the menu, without much to go on for description about the different teas listed.  First impression:  nice tea.  The first infusion the waitress poured for me was not brewed for long, hard to taste much, essentially just a long rinse. Later typical Wuyi Yancha flavors emerged, wood, leather, floral tones, cocoa and sweetness but seemingly related to aromatic sweetness in the smell of leather, not similar to the sweetness of fruit.
As can happen the complexity isn't well described by a list of flavors.  Perhaps a trace of slate or such mineral underlied the other primary flavors.  The tea was good, maybe only disappointing for being so familiar, due to drinking a lot of comparable teas recently. 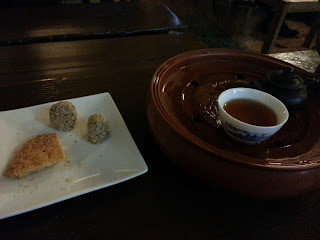 I noted there was very little char flavor element to the tea, and later research indicated it was supposed to be roasted more lightly than other Wuyi Yancha, so that made sense.  Some references even said the tea should brew to a yellowish or greenish color instead of the more typical reddish brown, but it looked a lot like any other typical version of the other Wuyi Yancha types.
It brewed a number of small pots consistently, good for the tea type.  I probably would have had more luck picking up subtle changes over the infusions except for having a slight cold at the time. 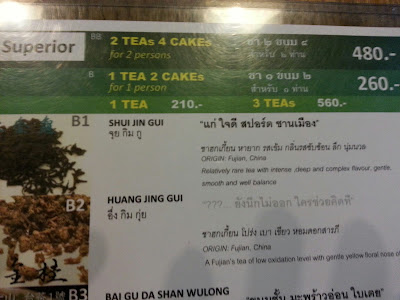 After four or five infusions the tea body (feel) was thinning but a woody taste and floral sweetness remained.  The char might have picked up a little, having been diminished by shorter infusion times earlier on, showing up a little more as I lengthened timing to compensate.
Chinese cakes were nice, maybe not ideal pairing for tasting due to being a bit sweet, but a good snack with tea.  At cost of 260 baht ($9) the value was ok, given that this is a rare tea type and some of that relates to drinking tea in a cafe.

Related to the issue of value it was the smallest tea-pot I've ever seen, so it maybe held 3 or 4 grams of dry tea, and the cup it brewed each time couldn't have been more than an ounce.  Of course I'm familiar with the gongfu-cha approach, and it was no problem spending 20 minutes brewing and drinking 6 ounces of tea, but with different expectations it could seem a little odd.  The staff didn't mention anything about brewing at all, but there was really only timing to get right or screw up. 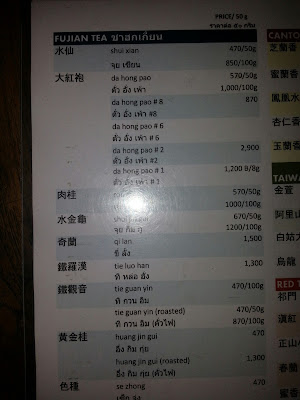 Before I left I checked the take-out tea list (pictured here; no way to take it in that dark room without a flash though).  There were a lot of interesting sounding teas on it, most between 500 and 1000 baht per 50 grams ($15 and $30), a price range for which decent teas are to be expected.  Since quality is such a factor in that range it's hard to judge value.


It would be the high point for some to take a break in a nice quiet café in the middle of a noisy Chinatown, but for me it wasn't worth it to buy a tiny pot of tea (and 3 or 4 grams of leaves) for over 200 baht versus 670 baht for 50 grams take-away and a dozen times as much tea at home.
I suppose I'd probably buy and drink some teas that I'd tried given that range but didn't buy any then.  The staff there didn't seem up to talking about tea, even after I was taking pictures of menus and such.  To be fair here in Thailand that can relate to English language competency as much as not having "service mind."

Reading around a bit about the general tea type I found an interesting description of the same type of tea sold by the same shop, so perhaps the exact same tea, but not necessarily so:
This tea makes you feel like immersing down in the deep sea of mind, exploring the marks of dignity and pain that imprinted  upon your life’s journey. Its characteristics is akin to that of a man in the late 50 years old. Deep and judicious, a frisky and wise old uncle. He is a bit of a rowdy, but a this is the roughness that accentuate the trace of his scars in life. He exhibits a dried passion, dry but peppery.
Are we still talking about tea?  A bit over the top but I like it, even though I have no idea what that means.  Actually another part of the same post mentioned more typical flavor elements, including cocoa, orange peel, nutmeg, and charcoal.  If it was the same tea it seemed to me there was an interesting earthiness to it that different people might describe in different ways.

It's normal for vendor content to crowd other types of references (reference sites, blogs, forum discussions), but in this case it was almost all just sales content many pages into a Google search.
This site is an unfamiliar general reference, www.oolongteainfo.com/shui-jin-gui/:
Shui Jin Gui, also called Golden Turtle in English, is a member of Si Da Ming Cong (the four famous Wuyi Oolong tea bushes). The other three members of the family are: Tie Luo Han, Bai Ji Guan, and Da Hong Bao. Shui Jin Gui comes from the Wuyi Mountain in the Northern Fujian province of China.
Of course that's what other vendors say too, although in rare cases there are five names listed.  The tea legend behind this one is something about a turtle god turning into a tea plant (ok...), and their description:
The tea has flowery sweet aroma with a pleasantly sweet aftertaste. Compared with other oolong teas, its taste is more subtle as it process with a lighter fire finish.
Another vendor site (Seven Cups) says a bit more about the typical taste, or at least of their product:
The dry tea leaves have a wonderful charcoal aroma, but after you infuse you can find the lightly floral aroma with plum blossom sweetness.
It was interesting they mentioned an alternate version of the "turtle" name origin (not so unusual for there to be more than one):
A torrential storm washed a few of these cliff-dwelling bushes down onto another farmer’s land. The bushes carried water and clay down the slopes with the tea bush on top, resembling an algae covered longevity turtle swimming in the water, thus the name “Water Turtle” was given to these bushes.
Maybe that happened; it really doesn't matter if it did or didn't.  I also mentioned this vendor description because there is a Tea Chat forum discussion of their teas, related to an earlier version of the same tea, or at least the discussion is from 2012.
The input is quite interesting, and everyone sounds very well informed and authoritative, even without anyone saying much about what the tea tasted like.  It's as well since impressions and descriptions vary, and brewing approach differences changes things quite a bit, and results already shift over different infusions, and so on.  Just mentioning a general impression works.
Other descriptions are essentially the same, and of course pricing for any versions of this tea aren't on the value-oriented end of the spectrum.  It's probably the case that lower end or knock-off versions of Wuyi Yancha tea would be sold as Da Hong Pao instead since it's more familiar, but that's still no guarantee that teas sold as this type would be genuine, actually what they were sold as.


One more description (Verdant's) ventured to the detailed extreme: