I ran across a Bangkok café with "tea" in the name on Trip Advisor, Tealicious, so I tried it out for lunch.  The site information (Google + page referenced here, because their site isn't pulling up just now) mentioned a large tea selection as well:


We have probably the largest selection of fine teas in Bangkok, such as Earl Grey, Lady Grey, Yorkshire, English Breakfast, Marks & Spencer Gold, Tetley to name but a few.

In retrospect them adding Tetley to that list could have been a warning sign, or not mentioning any typical single plant tea types at all (Longjing / dragonwell, Tie Kuan Yin, etc.).  At any rate the reviews were really good, and it's sort of near my office, one "neighborhood" over in Silom. 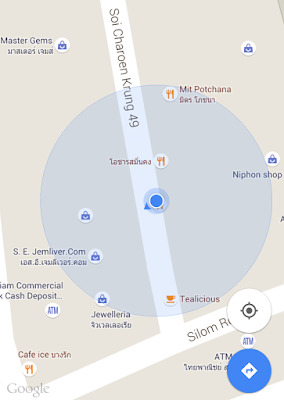 The trip there was complicated by the Google map not showing the actual location; very close, but still hard to make it that last 100 feet since it's down the alley from where shown.  In retrospect I was right there, but a local motorcycle taxi driver I asked directions from pointing me in the opposite direction didn't help.

Anywhere in the West the alley it was in could have been a huge warning sign, but things being a bit rough-edged are just part of Bangkok's charm.  There is very little crime to speak of here, so none of those concerns one would have in a US city, and an alley having that developing-world look to it is no sign of what a restaurant might be like either way.  It just isn't a mall environment, which can often be a good thing. 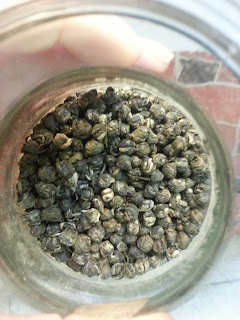 I picked out a tea first.  There was only one loose tea available, with the rest Twinnings tea bags and such.  No offense to Twinnings about the tea bags, I'm sure they're ok, but I'd just as soon not drink that, unless I'm stuck on a plane with no options or the like.  Since the one loose tea was a Chinese jasmine green pearl tea that's what I chose.


As they served it in a good-sized glass teapot I had a flashback to Hanoi, where I had a really nice green tea served at boiling temperature--a little hot for that type--in a good sized teapot.  It was great tea when I drank it immediately, not bad a couple of minutes later, and by the time a waitress brought me a glass to transfer it to and stop the brewing process it was sort of ruined and bitter.


This time the design of the teapot didn't allow for much contact of water with the tea so brewing was slow, and the tea itself was quite mellow.  After 5 minutes it wasn't really completely brewed yet, after 10 about right, and at 15 still not really overbrewing.  In the middle I compensated to speed it up a little by pouring the tea out of the pot to the cup, then across the leaves, and it worked out. 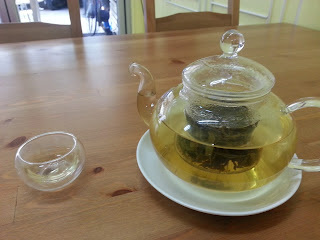 I ordered a jungle curry.  This reminded me of reading a little on tea pairing recently.  What would someone pair with a jasmine green tea?  What if just limited to Thai food?  Almost certainly not a curry, too strong and spicy to match with almost any tea, but I love that so too bad for the pairing idea.


It seems the question deserves an answer though, aside from saying any spicy food would mask the subtle attributes of any tea.  A masala chai would work, because it's typical to add milk and sugar, and it's not a tea you need to experience that subtle range of a dozen flavor elements with, they kind of all merge into one nice harmony anyway.  There really should be a Thai version of that but here "Thai tea" means inexpensive black tea mixed with condensed milk, or a powdered and artificially flavored approximation of the same, so whatever the traditional version was that's in the past now.


Actually the tea was really rich tasting, a bit buttery (odd for a green tea), floral (of course; cheating to add flowers), sweet, maybe towards a touch of caramel, so it worked well.  Jungle curry isn't the full-on spice blast that green and red curry profiles bring, more a balanced blend, so although it was a little hot for me the two sets of rich flavors matched up.  Technically I suppose a soft mild cheese with crackers would have let the tea show itself a little more but it was fine.


To switch gears back to food reviewing, I ordered the curry "not spicy," which the staff pointed out doesn't completely make sense given Thai curries are a spicy blend of spices.  Since I've lived in Bangkok for a number of years I get that; "spicy" is relative here, and I'm good with spicy foods (hot for an American).


Back in America in Thai restaurants my wife used to go through the opposite series of communication steps.  She would order something spicy, and a Thai server--or Laotian; odd there's no way an American could ever spot the difference, but they do tend to run and work in Thai restaurants--would say, "ok, spicy," and she would go on to clarify she is Thai, and she meant really spicy.  Then after getting the food she would ask them for fresh chilis, chili paste, and chili sauce and turn her food into a capsaicin science project that the wait staff couldn't believe, so hot that any babies in the restaurant would start crying just thinking about her eating it.  I guess the parallel doesn't completely hold because I was ordering food not-spicy knowing I was still giving them some space.


They may have cut back a little on the fresh peppercorns red pepper (not the sweet bell-pepper kind common in American; these are tiny and hot) but they seemed to overshoot "not spicy" by a bit.  See the pile on the plate?  It's just that; straight fire.  It was a relatively cool day in Bangkok (around 30 C / 84 F) but still odd to go out for spicy curry and hot tea at mid-day.

In conclusion, the meal was nice, just disappointing if the idea was to find a café with the best tea selection in Bangkok.  The tea I did have was nice, better than I imagined it would be, and a good Thai curry is no insignificant thing.  It all cost a bit over 200 baht (or around $7), oddly a slightly expensive meal as local working lunches go but quite reasonable for tourist food, on par with meals in a mall.

I would recommend this restaurant, and the jasmine green tea I had, but to find good tea in Thailand one should read further amongst these blog posts, or else get lost in Chinatown, but buyer-beware buying tea sitting out in giant jars or open bins like they have (which is just crazy).

I just noticed writing this restaurant is rated #7 of  8753 places to eat in Bangkok on Trip Advisor.  The food was good but come on, top ten in Bangkok?  A monkey could boil some curry paste and vegetables together so I guess I'd have to try something else to better judge.
Posted by John B at 2:32 AM