Trendy cafes aren't really my thing but they are quite common in Bangkok. This one, the Luka cafe, is near where I work, in Sathorn, which according to a local review of this cafe is becoming a more trendy area (perhaps a good thing).  Sathorn is a business district, mostly office buildings, with some embassies and businesses scattered in, so hard to say how trendy it could really get, but there have been nice restaurants around for awhile.  I guess cafes like this could be part of that transition, or in a different part of Sathorn I wrote about an art gallery, with at least one other gallery near that one--trendy enough.


The look is modern; large open spaces, exposed brick and concrete, with natural woods, rustic shelving holding traditional looking things, lots of windows for natural light, supplemented by indirect, natural-toned lighting, with a touch of neon for contrast.  It was so trendy that I had to fight an urge to walk right back out.  But for some this environment would feel like home, for Bangkok's "hi-so's."  It might as well be in Ekamai or Thong-lor. 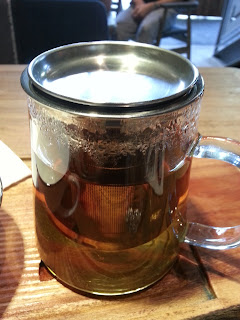 I was torn between choosing a conventional black Ceylon that sounded nice and a white peony / bai mu dan style tea from Sri Lanka (still Ceylon, obviously, just the country name reference instead of the former colony name that stuck to teas from there), and finally I went with the white.


The tea arrived in a small infuser pitcher; functional enough.  Brewing that tea with boiling point water, as it came, wouldn't match most recommendations for the type but the tea should still be fine.  I tried it after about two minutes and it didn't taste like much yet but standard brewing technique--the Western style version--would entail a long soak, 4 to 5 minutes, although I expect most tea enthusiasts would stop on the shorter side.


Brewing by inner timer is fine for me, and of course I did have a phone on me,if I really wanted to go there, but I'm not usually concerned about optimizing teas.  This one might not turn out that well if the temperature, time, and proportion of tea to water are all a bit off though. 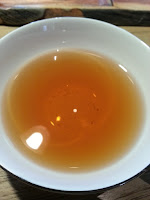 The tea is subtle.  It seemed brewed adequately,  between 4 and 5 minutes in, but it just didn't taste like much.  I don't usually use anything like infuser-structured gear and it seemed the limited contact of tea with water restricted the brewing process a little.  White teas can be subtle but this was really a bit too subtle, but nice all the same.  The effect was like a very mild black tea, at least the flavor profile that did come across was, earthy, with a little mineral, even a hint of copper, which sort of worked.


The design of the infuser didn't really let it keep steeping, at least not much, but it was slightly stronger for the second cup, the second half of the liquid initially poured into the device, left to sit with minimal contact with the tea.  This I liked more.  Somehow the white tea I'd had with breakfast seemed better, a much more forward and fruity white tea from Nepal, but I could see this tea growing on me if I had time to mess with it, dial in making it properly.


The feel of the tea had picked up, in addition to gaining some flavor profile, with the light astringency coming across as dryness, not completely unlike that white tea from Nepal but coupled with a completely different flavor profile.  It was a real shame to not brew it again and see what it had left, but I'd expect more of the same, another nearly identical infusion.  At least it didn't seem likely to transition anyway, or that it would've been close to spent.


In general peony / bai mu dan style teas tend to come across this way to me, a bit subtle at first, almost too wispy, but once you get used to the flavors not hitting you over the head the complexity and balance and mix of fruit and earthy tones is really appealing.  This version was inclined more towards earthy tones, with a bit of mineral, opposed to the more fruit-oriented Chinese versions of the general type that I've tried, perfect for a Sri Lankan tea.

The croissant sandwich I had with it was basic but pretty much perfect.  It was even better than I would prepare myself--just a bit odd to even be thinking that--since finding good versions of croissant, cheese, and bacon isn't a given here, although possible.  It also takes a degree of attention to get those basic ingredients to come out perfectly; cook the bacon or egg just a little too much or too little and it's still ok but it really loses something, falling short of the optimum.


So it goes with trendy cafes,  it seems.  Along with the pleasant light-jazz influenced contemporary music background, and good indirect lighting, it's all very comfortable, especially if one is into such environments.  By the end of the stay I was into it.

I looked around those rustic shelves a little, at the interesting items, and upstairs, and it seemed a lot like a trendy furniture showroom.  I don't mean that the decor was so consistently themed that it could be a showroom; it really didn't seem intended for actual seating.  It looked instead as if they were selling the furniture and the rest, and the space was just to show them, but I'm not sure about all that.


Some looking around related to what the tea was made for interesting reading.  A few different, apparently completely separate tea outlets were using the name "Atelier."  Google informs us that the word means "a workshop or studio, especially one used by an artist or designer," which does go with the aesthetic.  Let's go back to that BK Magazine description, since I wouldn't be able to go beyond describing what the place actually looks like:

Just like the other Casa Pagoda shops, this location's decor is meant to look like the edgy Provence villa of a couple of urban weekenders: a mix of 1900s bistro paraphernalia, distressed tufted leather couches, and vintage-looking seats upholstered in salvaged fabrics. It all basks in plenty of light, befitting Luka's menu.


That is just what I was going to say!  Apparently the food design has a nice background history as well, but I'll stick to the tea here.  Before I go into it's origins, I'll mention another, apparently completely unrelated "Atelier" tea reference is found in a Tea For Me Please review of Bellocq Tea Atelier in New York (in Greenpoint, Brooklyn, NYC, to be more precise).


One could make comparisons to that Bangkok cafe and draw some conclusions but I won't.  There seems to be no direct connection, aside from the designation "Atelier," although I can't really exclude the potential for some relation.


The tea is from this vendor instead, or at least that's an online channel to buy it (an "Onner App" version of a store), not really a source reference.  There seems to be no vendor website but this is their instagram page, which seems to be advertising for a shop called The Selected, in Siam Center.  They mention sourcing the tea originally from a craft-theme vendor, Ebony Springs, who also doesn't sell teas online, but they do show a picture of this tea in that link.

That original source sounds interesting, a retreat / home-stay themed destination in Sri Lanka, where the natural setting and tea making are both part of the draw, like a trendy, craft-tea-production oriented version of eco-tourism.

So there really are no online descriptions of the tea, beyond describing a "unique aroma that gives a comfort feeling" in a picture caption, a bit of a throw-away.  It might be convenient to walk into one of those places to buy it, and hear a bit more there, unless someone isn't in Bangkok.  If not there was that online outlet, no old-style shopping-cart format site, mind you, a trendy app-based version.
Posted by John B at 2:33 AM