The tea has a nice smell, a lot of sweetness, with subtle promise of some spice element.


Tasting the tea, the sweetness and spice come across right away, although the spice element is somewhat faint.  There is also a feel to the tea that defines it even more, one that seems integrated with a range of mineral taste elements.  The overall effect is that of a clean and complex tea.  I think if someone really loved that structured, mineral effect from a lot of Taiwanese high mountain oolongs this would be very positive, for me maybe just a bit neutral. 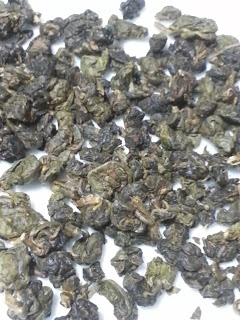 On the positive side,  that bit of extra flavor and slight dryness give the tea a nice balance, more interesting than simple, soft, sweet teas.  Potentially negative, the tea doesn't emphasize the floral or fruit elements many would associate with their favorite light oolongs.  More to follow on the type in the next section, but based on reading up in general this type is known for pronounced fruitiness.  The mineral range really isn't far from the range typical in oolongs from Taiwan, maybe limestone, if I had to guess a rock.


I've mentioned before about not remembering floral smells, and I struggle a little with specifying types of wood elements, so how is it that I'm guessing the smell of different rocks?   When I was younger I did some rock climbing.  Hanging on by your fingertips and the rubber edge of a very tight special shoe gives you a special perspective on rock type differences, even if there is no special focus on the smell.  Limestone is not so ideal for climbing, by the way, a little slippery; a nice hard granite gives you much more to work with.


Odd leaving off saying that the tea is good but it just tastes like a rock.  There is a hint of spice under that,  just hard to place as faint as it is.  Other taste range might relate to a soft lighter wood (the type of which I'll skip guessing). There is some sweetness to go with the dryness, and some taste in the floral range, so the balance is ok, just leaning towards dry.


The flavor softens and deepens as infusions progress, and this seems the type of tea differing brewing might get different effects from.  Maybe that's true of more teas than it doesn't apply to,  just in different senses.  After some infusions the pronounced mineral range gives way to more earth and some fruit, but it's hard to list out one or more distinct fruit flavors since that is combined with the mineral and earth / wood tastes. 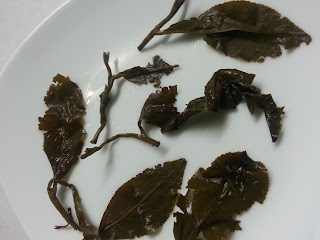 I don't think I've reviewed a four seasons oolong before, although I've tried a number of them here.  General reading up identifies these more commonly produced as an everyday tea.  The type is capable of being made into a high quality tea but given that it's easy to produce in good volume at lower elevations it's more often made as a more mid-range tea.  This is probably the best version I've tried, although it is difficult to remember every instance of a type.


Seems like all that, maybe it just seemed a bit less floral, to me.  The taste range wasn't similar to a very lightly oxidized oolong, as Jin Xuan are often produced, or Tie Kuan Yin sometimes referred to as "nuclear green."  I sort of like the freshness that goes along with that really lightly oxidized oolong preparation, but I wouldn't want to drink that too often, and this tea seemed to have a bit more balance due to being either oxidized or roasted just a bit more, or both (although it's not a darker oolong by any means, just not bright green oolong).

Cultivar-type designations sort of don't matter so much but since it's an interest I'll go into that, in relation to a second reference, from "Teapedia":

Oolong Si Ji Chun, translated "four seasons" is a 1980 developed cultivar from Taiwan. Si Ji Chun is also marketed as "Four Seasons" but has no TTES number as it wasn't breed by the Taiwan Tea Research and Experiment Station. The appellation "Four Seasons" is due to the cultivars ability to produce a even quality during all seasons. Oolong Four Seasons is intensively fruity in taste and should be infused only for short time as it tends to astringency if steeped too long.


That tea didn't seem astringent in the least, but it may have worked better infused even more lightly, using a bit less leaf than I did.

There's also a contradiction here; the first vendor reference says this is TTES # 15, this source says it has no number, but is a recent cultivar type created outside that system of numbered types.

It's difficult to ever fully resolve these issues, since different references could continue to say different things, but one research oriented article I've mentioned in the past at least seems authoritative, with the related table reference cited here:


Fascinating!  They say this is a landrace, an original native plant type.  Of course if one goes back far enough these types were surely imported or developed through selective breeding at some earlier point.  It was a minor point anyway, a bit academic if the plant type really was developed in the 1980s or not.
Posted by John B at 1:15 AM