Review of an unsmoked Lapsang Souchong from Cindy Chen


This tea (from Cindy Chen, my favorite tea farmer) reminds me a lot of a Jin Jun Mei.  That type really is a subset of Lapsang Souchong, a variation of it, but one made from only the buds, hence the name (golden eyebrow).  This Lapsang version uses leaves but only smaller leaves, those tightly twisted.  It's an unsmoked tea, going against the original and more common convention that such a tea is typically pine-smoked, something just discussed in a Facebook tea group.  So an unsmoked version is perhaps not so unusual, but maybe not what everyone would expect.


If I were to describe Jin Jun Mei I might be describing this tea.  I might as well start with that and then mention the differences afterwards.   The unusual characteristic flavor (or set of flavors, might be better) relates to a sort of dryness, to me, but then that's a feel, not a taste, right?  It's hard to describe.   It's malty, but then different teas have different types of "malt" related tastes.  It also tastes a little like balsa wood smells, that stuff model planes might be made out of.  That's vaguely related to fresh cardboard or cork but that doesn't sound as nice as it is.

It's really more complex than it comes across at first, so although it seems like there is one distinctive taste it's really a distinctive flavor profile, a complex combination of a number of tastes, that malty taste, a little towards cocoa, extended to an earthiness, with mineral undertones, all packed together into a tightly related range.  Given how the flavors combine I'd expect people to express that set differently, maybe even to associate one part with fruit.  I kind of don't, but maybe there is a hint of apricot in the mix.

It's the kind of taste--or set of tastes, profile, whatever--that one might not love at first but once you've had it a few times might really crave it.  I guess Keemun could be a little like that, perhaps just slightly less so, to me.  I've had the opposite experience before, a taste or set of tastes in a tea that seemed nice that later I sort of got over.  Hojicha was like that for me, but I have a sample at home, so I can check on that, if I'm truly over it or if I just felt like a long break after a couple.

Even though this is all still just a long tangent let's reference a review from one of the more taste-sensitive bloggers that I end up referring to, in a review of a Jin Jun Mei, by Amanda in the My Thoughts Are Like Butterflies blog:

...it starts soft in both texture and taste, with notes of malt and molasses and I swear a touch of maple syrup. Towards the end it picks up notes of sweet potatoes and dates with a touch of roasted peanuts.


She mentioned a scent of wood in the range of pine in the aroma, but really you already get the gist, it's complex, not just that one tea but the type in general.  Maybe it's just me but in this type of tea more than others somehow that complex range of flavors seems to come across as unified, as one continuous range.  She mentioned a quality she described as "resinous," which I think might relate to that one aspect I'm not having much luck with pinning down, sort of tied to a taste range but really also about an unusual feel, not necessarily good or bad but just different, distinctive.

The extra maltiness is where this tea starts to seem more like a lapsang souchong, or at least a lot like one other higher grade example I've tried.  That element may not show through in a smoked version nearly as well, since it could just merge into the background behind a more prominent smoke effect.  The rest of the profile is nice, a nice sweetness and balance, some subdued earthiness beyond that, a clean feel and presentation of the flavors.  Again for this tea I could imagine lots of people describing this in lots of different ways.


The type stands apart a bit from other black teas, but then it's easy to say that of the other types too.  Of course it still tastes a little like a black tea, in the same way good and bad red wine all sort of taste like red wine.  There isn't much astringency to worry about, although lower quality versions can vary related to that.  The tea flavor is in the earthy and sweet range but one part of it can come across as hinting towards sourness, in a great sense if someone loves such teas, and I do like them.


Some black teas that are sweet in the sweet potato range can be a bit much for me, and can seem to lack balance, or to have too much of a certain type of aftertaste, but the bit of dryness and slight shift towards a savory / sour range in this tea works out well (per my preference; I don't see this sort of thing as an absolute, or even less so than some other factors).  Since pine smoke also can be sour for me smoked versions are great or terrible largely related to level of smoke and how far the tastes drift in that direction, since it can join together in a wonderful balance or not really work at all.  I had one once that I liked that was so smokey it was as if I was breathing smoke for a half an hour afterwards, like the smell of smoke had stuck to my clothes, but somehow that tea still worked. 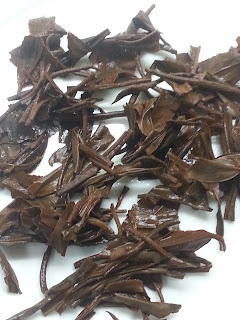 Since it's a black tea it's not as particular about brewing but it is important to get the flavor strength or intensity right to strike the right balance.  Brewed very lightly it still works well, and that's how someone might prefer it, quite wispy, but if it's even a little too strong the overall effect isn't the same.  As an example for comparison, to me for light oolongs it doesn't matter related to that concern so much, infusion strength, and for those it's more about reaching an optimum than about a risk of botching the tea, since it works ok stronger or lighter.  Which reminds me, I finally did drink a green tea using a variation of "grandpa style" recently, but it seems I've done a lot with tangents in this post to go into that.


Compared to the other nice version of a Lapsang Souchong that I've tried last year (and bought a lot of, actually) the difference is that dryness and taste element of Jin Jun Mei, that extra complexity that extends into the range of a feel.  That tea was sweet and malty with a little nice earth background but not as distinctive.  My favorite Bangkok Chinatown vendor shared some of their own tea, JJM I mean, and it was close to this in terms of some aspects (relatively--it is a different type), but I didn't get around to writing it up in this blog. 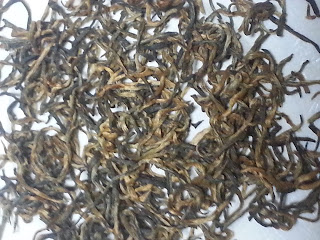 I didn't mention it before, but in a post mentioning Cindy Chen's family doing well in a Wuyishan tea competition (if you consider taking first place for Rou Gui and second for Shui Xian doing well) I didn't say that they also placed--just lower--for black teas.  Since someone in that Facebook discussion mentioned Cindy's Jin Jun Mei is nothing like this tea I also wanted to try it (I bought both recently, and a Rou Gui they make) and then say a little about it.


To sum up how that went:  forget what I said about these two teas being similar.  That one taste aspect is common but the Jin Jun Mei is a completely different thing, that much further from a conventional black tea in flavor profile (if there is such a thing), with just loads of malt and a decent amount of cocoa and a really unique character.  But maybe it will work better to do more with comparison when I review that tea in a different post later.