I didn't really like the tea, but I'll review it since the tea brings up some interesting related discussion.  Tea blog reviews are generally positive, with some exceptions, and there is a story to be told about bad tea too, maybe more story in some cases.  One could get the impression that most tea is very nice, that it's just a matter of finding that set of trusted suppliers to only buy tea versions that you like, and there could be something to that.  But for me gambling on tea that might not be good is part of it all.

At any rate, the related website is here, and the Facebook page is here, for Doi Dhamma Tea.  I can't really endorse other teas I didn't try but their lightly oxidized oolongs are probably pretty good but not great, since that describes most Thai oolongs I've tried. 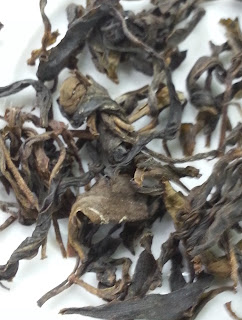 We visited a beach in the South of Thailand not long ago (nice down there), and I found this tea in a mall shop on the way back.  The tea is from the North of Thailand, as essentially all tea here seems to be, unless it's from China.  I tried a sample of white tea from Thailand in the shop, the first example I've ever seen of such a thing (besides one or two silver needle-types, but this wasn't that).  But I didn't really like that white tea either.  It looked interesting, like a bit of a broken-up version of a Bai Mu Dan, not completely unlike that White Beauty from Toba Wangi in Indonesia, but nowhere near as good.  Since they were kind enough to offer samples I wanted to also buy some, and a jasmine black tea looked and smelled ok, and the cost was relatively insignificant, so I bought that.


I almost tried a jasmine black tea from Hatvala (a Vietnamese tea supplier) that probably would have been much nicer, but in discussing floral blends with the owner last year I mentioned not really liking jasmine green tea, so he didn't send a sample.  Later in the year I tried jasmine black tea in Indonesia, ordinary commercial tea grades of it, and liked that much better than typical jasmine green teas.  To be fair some green tea versions do manage a flavor balance much better than others.


Surely it's just personal preference but the balance of that unusual level of floral sweetness in jasmine flowers, which can have a bit of nail-polish remover overtone to it, seems to work better with black tea for me.  Maybe it's just that green teas can already have vegetal-aspect and astringency issues, although they needn't, and it usually doesn't work for me to add that particular taste element to that mix.

At any rate it seemed a safe bet, that even if the black tea wasn't a great version or the jasmine wasn't well balanced the tea would still be ok.  The cost was so low it wasn't much of a gamble (150 baht / $5 for what looked to be 50 grams of tea, but then foreign language labeling doesn't help with
identifying product details). 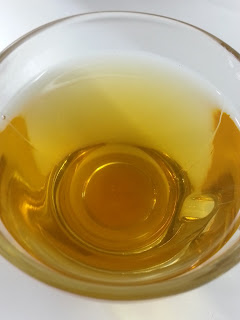 Even prior to tasting the brewed tea it looked off, the wrong color.  Black tea should be reddish, or even a darker reddish if brewed strong, but this was gold, in the range of a mid-oxidized oolong.  The taste wasn't bad related to the jasmine input, just not completely positive, but it seemed that it would have worked out much better coupled with a true black tea, one that is fully oxidized.  The jasmine aspect wasn't perfectly balanced but not awful, not "off" in ways it can be, especially when it's too intense.


Upon reflection part of what I didn't like was related to expectations, and the tea is better if one thinks of it as a jasmine oolong, even though that doesn't seem to make a lot of sense.  The effect is typical of oolongs, a bit smooth, with a medium body.  Related to taste the jasmine could be interpreted as crowding out the rest of the profile rather than letting it blend together, but it does taste natural, just a bit strong for my preference in balance.  I think this was what I really liked about the jasmine black teas I've tried, that the extra astringency and fuller flavor of black tea balances that slightly intense and unusual input of jasmine better, even aside from issues of getting flavors levels tuned properly.  It sounds harsh describing that jasmine range as "nail polish remover," probably not necessarily like that when done well, but it's definitely different.  I don't love floral teas in general but I've liked osmanthus oolong versions a little better.


I was curious about how the tea would stand as an oolong without the jasmine but that taste wasn't subtle enough to make it easy to mentally subtract the effect.  At a guess it wouldn't make for a really good oolong without the jasmine either, not really surprising given that they were attempting black tea processing and just missed it, since the processing steps aren't necessarily identical.  Come to think of it maybe I should try roasting this.


I tried mixing it with a real black tea, a version I bought a lot of from Hatvala last year (their Wild Boar), and it was much better.  I was a bit shocked to taste two different tea types mixed together at first, essentially blending oolong, black tea, and a floral component, although again it's probably not really a true oolong in terms of conventional processing.  But once I moved past that mild "tea blending abomination" feeling from mixing tea types and let expectations settle the experience was much more positive.  I still think I would prefer a true black tea as a base, not the blend of two types, but the mix worked better than I thought it would.  I was only left to consider if I liked it better than the Wild Boar black tea alone--maybe not a necessary question--and I probably don't.


Gambling on teas; like kissing frogs to find a prince (except that would make me the princess) 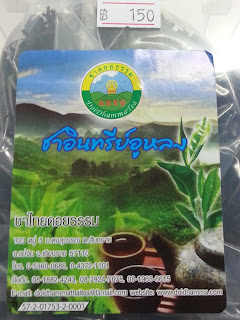 Why not just order good quality, well-described tea from trusted sources, or sources one would be likely to trust, which could be discarded as options if they don't work out?  I try tea for different reasons, for the experience of exceptional teas, and also just to try new things.  And I really like finding something nice I would have never had a chance to try if I only played it safer.  Such cases are rare.  It's a lot more typical to find really ordinary teas, or badly flawed versions, or teas that are interesting but not good.


I once bought a nice black tea in a grocery store in Siem Reap, Cambodia that came across as a little rough but with an interesting character, a bit smoky, with some sweetness and an unusual flavor profile.  It cost next to nothing, and it should have been awful given where I'd bought it, but it was interesting, and nice, not the same as any other tea I've tried.


Related to Thai tea options, I've already mentioned my own favorite Thai tea vendors, with Tea Side standing out as finding the most unusual teas, and some of the best.  The Tea Village shop and online store does a good job of finding good or decent teas, really almost offered as two different sets, with a divide in pricing and product descriptions relatively clearly identifying which are decent basics and which are more interesting.  For physical shops I've tried nice versions from the Monsoon shop in Chiang Mai, and their owner has been chasing sustainable local teas and experimenting with natural flavored blends, and it's a good place to try what a local Assamica black tea is like (maybe what you'd expect, if you have really good imagination and intuition).  Beyond that any mall shop could have great teas tucked away but they would seem much more likely not to.

But all that is too easy, just going with what you know (after a few years of searching).  I'm still tempted by teas I see in lots of places, even in gas stations.  "Ordinary" Thai teas can turn up there, "ordinary" meaning decent Jin Xuan lighter oolongs, perfect as a gateway to better teas but typically nothing exceptional.  Or at least that's how it worked out for me, with those.  Now I'm a bit spoiled by exposure and preference development, and that level that one can find in grocery stores just doesn't cut it, certainly also true of tea in gas stations.

Great teas are a completely different subject, with nothing to do with all this, except the part about curated versions, back to what those few Thai vendors carry, and all three vendors know which teas are which.  There is very little tea produced in Thailand on that next level and random luck usually won't cause your path to cross those better examples, not even in huge local markets, although maybe there, at least in the North.  Or at least that's generally true; there's a tea shop in the Chiang Mai airport that sells versions from local producers, and there's probably a few hidden gems in there.  It would take someone time and effort to find them, even with the staff providing tastes of brewed samples, and it would probably really help to speak Thai to communicate with them.

Personal preference also complicates all this.  There's a good chance that someone else might spit that Cambodian black tea that I liked back out based on differences in what they like.  The Tea Side vendor didn't seem to be as blown away with one of the black tea version samples he provided as I was (their Jin Xuan based black tea--crazy how good).


I'll keep gambling, and the rare exceptional finds will make it worth keeping that up.  Or at least it will except to my wife, who has had it with the tea reserves piling up at our house, and really doesn't care if a tea is next to free and interesting looking.  In the meantime if anyone reading this in Bangkok would really love to try a moderately oxidized black tea / jasmine blend we should talk.
Posted by John B at 3:17 AM