I met Kenneth of Monsoon teas not so long ago, visiting in my favorite Chinatown tea shop, Jip Eu.  I've known him online for awhile, and reviewed some of their teas, but it was our first time to meet.  He's nice.

Monsoon's thing is wild tea (beyond being a Chiang Mai cafe, and selling different products); emphasizing the sustainability aspect, along with the novelty and uniqueness of different plant types growing in a wild setting.  Of course I was a little skeptical.  Beyond sustainability concerns one might speculate that commercial interests also come into play, a desire to sell what are essentially weeds growing wild for similar prices as cultivated plants.


Travelling in the South of Thailand informs part of the background story.  Whole regions of ecosystems have essentially been completely removed to make way for rubber trees and sugar and oil palms.  Tea farms in the Chiang Rai or Chiang Mai aren't on that scale, so maybe they're only clearing a square kilometer of space for crops, but even that isn't healthy for the environment, which does seem to be a real concern. 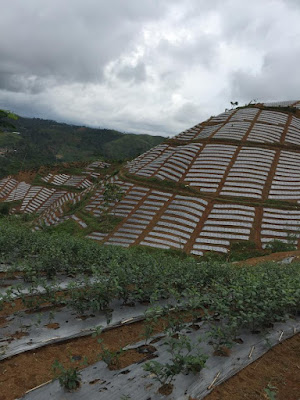 It doesn't just relate to what is removed or local fauna disruption; those farms would have an impact on the local environment, affecting drainage patterns, relating to pesticides used (even in organic farming, just different types), and so on.  The impact of changing nature is not always immediately evident.  The relatively widespread loss of bee colonies is an example that has been unfolding for some time, and I'm not sure that all of the root causes of that have been identified yet.  At one point use of fungicides seemed the most likely cause, per what I've read, but something I ran across more recently indicated loss of types of natural access zones may also be related, a different level of cause.


When you think about it if a weed makes a delicious tea (or tisane, if you must, but the plants are closely related genetic variants at the most distant, so it's tea) then paying whatever sorts out as a market price for that is a good value.  And drinking some of it plays a very small role in sparing natural areas from clear-cutting to grow tea plants. 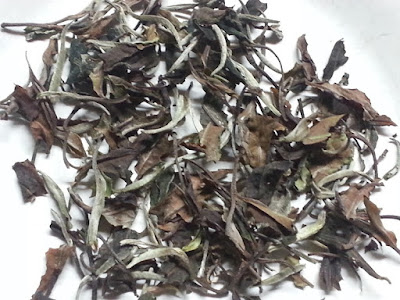 This is a white tea, with an unusual look, some different colors, but then the appearance of white teas does vary.  My understanding is that it's Assamica, but I'll say more about that at the end.

The tea is nice brewed lightly, bright and fresh, a bit sweet and complex,  and relatively clean tasting.  It's in the normal range for white teas, just a little unusual.  Brewing slightly stronger will help with separating flavors.

There is a sweet fruit element, along the line of dried peach.  And it's a bit creamy, actually tasting a little like cream.  The fruitiness extends a little towards blueberry, or maybe raspberry instead.  It's not distinct enough that it comes across as those separate elements, just in that range.

There is a mild earthiness and dryness too, underlying that, and a trace of an unusual flavor, hard to isolate.  Forest floor is a more pronounced part of that, fall leaves, and a bit of mineral, and an unusual light earthy tone.  It's like the wood scent of a stump, not decaying wood as in a peat or mulch scent, but with an aged effect. 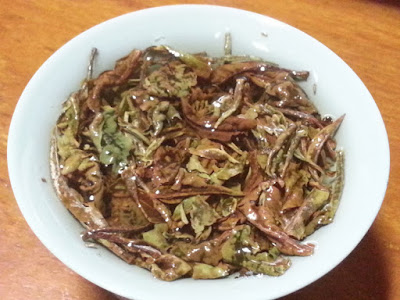 It all does work but it's different.  It helps that I've been on shou mei cakes for awhile.  They're not the same but the general range is common.

The next infusion is a little strong as well, really how a lot of people would typically brew this type of tea.  I'm using "light" and "strong" in a relative sense, related to how I prefer and prepare my own teas, so that's not so simple to communicate.  A specific measured proportion and brewing time could work as clarification but I'm not including that either (but it was prepared using a typical Gongfu proportion, a lot of tea relative to the amount of water, and brewed for about a minute and a half).

The sweetness is nice, the fruit.  It reminds me of running across a flavor like that of teaberry in a tea recently (a wild berry type, esssentially), something different, not exactly that but not far off it.  The fruit lightens up and transitions a little (now three infusions in), starting to pick up a bit of woodiness. 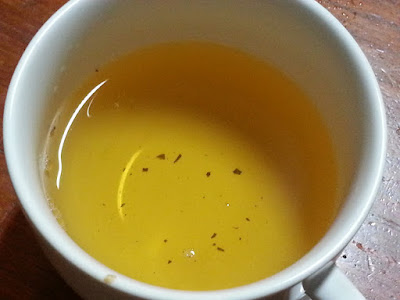 The one earthy aspect would make or break this tea, how someone relates to it based on their own preferences.  It's subdued, but not really common to other types.  For me it's fine, close enough to a spice tone that it's familiar, and clean in effect, but for others that impression would probably vary.  That one aspect shifts from forest floor in this infusion onto root spice, more like sassafras.

I tried the next infusion lighter.  The tea isn't close to finished yet but it should be on the second half of any transitions.  Brewed lightly it still works but the effect is different.  The feel isn't thin but it is lighter.  It still provides notable aftertaste but that always was in a moderate, type-typical range in the other infusions (although white teas or any type can vary a good bit related to feel and aftertaste).  The same fruity sweetness stands out, something out there between dried peach, raspberry,  and teaberry.

Brewed one more time the tea is fading a little but can probably make a couple more nice infusions.  Woodiness keeps picking up but that sweetness and interesting aspect range remains.  Even the woodiness is nice, not far from light root spice, not the heavier hardwood lumber taste some teas move to.  If I think "teaberry" that's still there but really I'm meeting the aspects actually present in the middle with that interpretation.  The tea is nice, different. 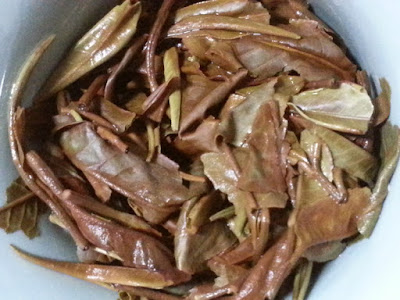 About the tea related to local history


This plant type is a variation of Assamica, I think, but I never did hear the full story related to that.  I'll start in on background history here instead.

I've been going over Thai history and tea history lately--and early human development,  for that matter--and these plants have been here awhile, more than long enough for plant types to naturally evolve.  The time line of 1000 years tends to be thrown around (also related to how old tea trees are, but who knows about that), but I get the sense that no one really knows.  It seems possible that people traveled a lot more locally (in the region) 10,000 years ago than we give them credit for.  Or maybe 300,000, for that matter.


Check out this reference about early Thai history:


The forebears of the modern Thai were Tai-speaking people living south of the Chang Jiang (Yangtze River) on the mountainous plateau of what is now the Chinese province of Yunnan. Early Chinese records (the first recorded Chinese reference to the Tai is dated sixth century B.C.) document the Tai cultivating wetland rice in valley and lowland areas. During the first millennium A.D., before the emergence of formal states governed by Tai speaking elites, these people lived in scattered villages drawn together into muang, or principalities.


...Tradition sets 1238 as the date when Tai chieftains overthrew the Khmer at Sukhothai, capital of Angkor's outlying northwestern province, and established a Tai kingdom.

As for that reference site's authenticity, this description of the content need not be accurate, but if it is then the source is probably relatively sound:


This website contains the on-line versions of books previously published in hard copy by the Federal Research Division of the Library of Congress as part of the Country Studies/Area Handbook Series sponsored by the U.S. Department of the Army between 1986 and 1998.


Other content in that site mentions there was continuous human habitation in the Thailand area for the last 20,000 years, but it's not as if it can be limited to only then with certainty.  There is a variety of inhabitance evidence spanning different time periods, including disputed evidence of homo erectus ancestry in Thailand, Lampang Man (with more references for further reading on that cited in a related Wikipedia article).  I've actually seen fossils of what was presented as pre-homo sapien hominid in Northeast Thailand (Isaan), which seems more convincing, actually seeing evidence, but it doesn't really work to identify or validate a fossil as a museum visitor.  Maybe if I was the right kind of biological anthropologist I could.


It's not really related to this region or tea, but tied to the idea that it's difficult to determine what we don't know about the past, a relatively recent finding in Morocco potentially pushes back the origin of homo sapiens by 100,000 years, to around 300,000 years ago.  That also expands the scope of where early humans lived, across parts of Africa instead of only in the East.  So recently learning that tea cultivation started in China 3,000 years earlier than we thought is normal; the known history will keep changing as the evidence changes.


Related to an online discussion of tea types--more about Taliensis, a different plant type that's either tea or closely related to tea--a US tea grower just wrote an article that goes into some history.  But all that is a different subject, really, with that article also about pu'er, and Yaupon, so exploring different themes.

"Wild" tea plant variants are something else, or probably a range of different things.  This tea type source really could have just been Assamica, a conventional local tea plant, or since the plants can inter-breed (mix genetics) possibly somewhere in between.  This table of plant types shows how each differs; per my reading of this (not the most informed take).


The "shan" teas in the middle are local Thai variations of Assamica (the "A" on the species / variety column), with some other "wild" variations listed below.  Those are tea types that are not within the range of Assamica or Sinensis varieties, here relating to Taiwanese teas, since this is a plant types study from there.