I researched the effects of caffeine for a blog post last year (here), which reviewed a research paper studying caffeine withdrawal.   I'm revisiting the subject related to finding an interesting study of caffeine levels in different tea types.

Of course all of the effects of caffeine vary by individual (people react differently), and the overall effects relate to compounds other than caffeine, eg. theanine relaxes you.  I'll summarize some findings in that first post here, with more sources cited there:


-a standard limit for caffeine intake is 400 milligrams per day.  That's equivalent to roughly four cups of coffee a day, or eight to twelve cups of tea.  Levels for both vary, but a rough average for a cup of coffee is 100 mg and 30-50 mg for tea.

-even if insomnia isn't experienced sleep cycle can be affected related to the normal brain-state patterns being altered.  In other words, it's possible to sleep normal amounts but still experience fatigue related to the negative effects of caffeine.

The rest that follows is on two other unrelated points about caffeine levels in teas, not the effects on people.

Amount of caffeine in tea


One reference stands out on this subject, written by Nigel Melican.  It covers two main issues:  amount of caffeine in different types of teas, and if tea can be decaffeinated by discarding the initial infusion (something of an urban legend).

The short answer to the second question is no.  Test results in that article measure the amount of caffeine removed over varying infusion times (a process that would vary with brewing parameters):


Clear enough?  Roughly speaking the caffeine is removed at the same rate as the flavor.


The other part is not so easy to summarize, about caffeine amounts in different types of tea.  Three generalities are cited directly from the same article (with other factors covered there):


1. Caffeine level varies naturally in types of tea and levels in one type may overlap with another type

2. Black and green tea manufactured from leaf from the same bushes on the same day will have virtually the same caffeine levels (within +/- 0.3%)

3. For a given bush, the finer the plucking standard, the higher the caffeine level


People tend to expect other generalities, for example that green tea has more caffeine than black, or that white contains the most.


A research paper I just read cited test results for lots of different compounds (not just reviewing caffeine levels), including these measured results: 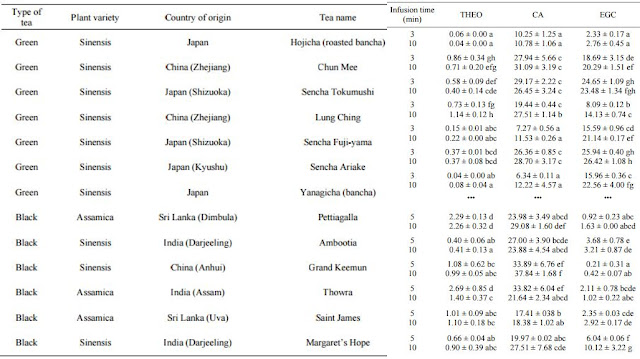 Those measured amounts relate to theobromine (THEO), caffeine (CA), and Epigallocatechin (EGC).  Only caffeine means much to me, but I've ran across health claims related to other compounds (with others measured in that study).  I won't mention any of that scope here.

The most general conclusion I take from this:  caffeine levels vary across different types, related to different factors.  That first article cited a few main ones:  related to plant type, plucking standard (types of leaves used), processing variations, and growing conditions.


A few problems with the results in that table stand out:  the amounts are listed in milligrams per gram of tea, not a familiar presentation (but it still does indicate relative amounts).  And the results of testing these samples seem inconsistent, especially related to brewing time variation test results.


• when the bush is assamica type rather than sinensis (can be 33% higher caffeine, thus African black tea tends to be higher than China black tea)


But then other factors cause so much variation that might not stand out clearly.

This article wasn't focusing on caffeine measurement, instead related to measuring lots of different compound types.  This is a good place to mention the title, which is well worth a read, as the title suggests:


With proper research someone might pin down clearer generalities.  Studies like this one could help if someone wanted to minimize their caffeine intake by choosing types with lower levels.  It might not work to base that on just one research reference, since those might only describe results for the samples tested, not for the tea type in general.