Giving tea to a Thai princess 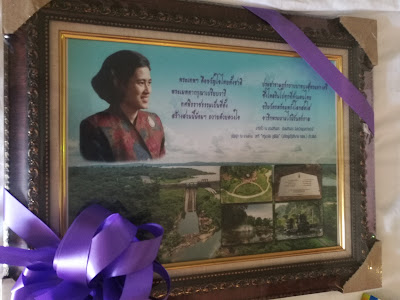 I'm so excited about this story that it's impossible to not just jump ahead to the end:  I gave tea to a Thai princess!  Better to tell the whole story though, starting way back, prior to forty years ago.


My wife's grandfather was a famous Thai author, Malai Chupinit.  He wrote stories about Thai history and culture, about natural environments in Thailand, and also love stories and adventure stories.  This is an example of one, The Field of the Great.  I have trouble placing him related to English language tradition authors; maybe he's not far from Earnest Hemingway, or just a bit towards Mark Twain from that content theme.  That link goes to a translated text with a content sample on Amazon so readers can judge that for themselves, at least related to a translated form.


There was a commissioning ceremony for a relatively new library in Kamphaeng Pet that included a small section dedicated to his work.  Her Royal Highness Princess Sirinthorn would attend,  certainly one of the most beloved figures in modern Thai society.


Any Thai would be excited and honored just to attend and see her from a distance, and I was too.  But it went further; my wife's family was a part of the ceremony, to a very limited extent.  They were able to present her with a gift of books from her grandfather in one final part.  And so I added tea to that gift.

That's already the basic story.  I can't do justice to what it was like to see her, even from afar, or why it means something to me, as it does to Thais.  Saying anything about it at all is unusual.


If a Catholic sees the Pope at an official function there is no way to describe what that means, or what the experience is like.  She's not a religious figure, of course, so it's only an analogy.  I can't describe what Thai Royalty means to Thais.

It seems to work to say that there is no comparison to be made within American society.  I guess for a British person seeing their Royal family at an event might be similar.


I chose a silver needle cake I had tried awhile back for a gift.  The idea was that it's a unique form of tea; it looks different, and it is different.  Often fresh, loose silver needle versions can be a bit subtle but some degree of aging might have added some complexity.  That tea was one of the best white teas I've ever tried, and probably the best compressed white tea I've yet to try (reviewed here).  It's a better white tea than any of four shou mei and gong mei versions I reviewed last year.


I suppose in the past I've been more of a fan of Chinese black tea, and also of roasted, twisted-style oolongs (Wuyi Yancha and Dan Cong), and lately I've been focusing more on sheng pu'er.  The shop I bought the tea from, my favorite in the Bangkok Chinatown, Jip Eu, specializes in Wuyi Yancha, that one favorite oolong category  Those are twisted style roasted teas from Fujian, China, which includes specific teas like Da Hong Pao, Rou Gui, and Tie Luo Han (with more on the types and background in this Global Tea Hut reference).

I visited Chinatown just to pick up that tea, and as chance had it met a friend with some out of town visitors at that same time.  I told the shop owner, Kittichai, who the tea was for, and based on remembering a tasting event details from a decade before they also contributed a type of tea she liked, a Da Hong Pao, a higher quality example of what might be considered the main one of those Wuyi Yancha roasted oolongs.  If I had to pick one personal favorite general style of tea that would be it.


Thai oolongs are typically made in the Taiwanese lighter rolled style instead, which was a favorite of mine earlier in my preference progression.  To me those are much better suited for someone newer to tea appreciation, even though the best Taiwanese versions are fantastic, and varied, not only a beginner's tea at all.


Oddly I didn't get a good picture of exactly what that tea was, the labeling, or a clear producer name, even in that prior review.  I had tried the tea, and have more at home still, so I knew what it was in that sense (a Fuding area Bai Hao Yin Zhen cake, of course).  A Chinese character label and producer name wouldn't mean much to me but it's still an odd oversight.  I was really busy with other preparation details that week.


That friend I mentioned meeting in Chinatown was Sasha Abramovich, with Maddhurjya Gogoi visiting, an Assam tea producer, who I've also mentioned before (both in this post).  We visited and talked about tea farming and processing development and fair trade in Assam, India, a subject I'll get back to.


There's no way to express what that event meant to me.  I love sharing tea with people I know, or even with people I don't know.  It was an honor to be able to give interesting versions to a person who is so universally loved here, and so instrumental in the history of the country of Thailand.  Thais don't only love her for her station; she expresses the selflessness and genuine care for the people that have long been a part of the Thai Royal tradition.  It was an experience I'll treasure.


In one sense it's still only tea, but sometimes tea isn't just tea, it's a symbol for things that mean a lot more.  Thailand has been been a great home and in a sense it represented showing appreciation for all this country has done for me.