Finding a tea shop near you

I've been doing Quora answers lately, and a question brought up a good point:  how do you find a good physical tea shop nearby?  Actually it related to one near Gainesville, Florida, but the same answer works more generally.  I'll cite that Quora answer here, and there might not be much need to say more than I did there about a shop search:

Where is a good place to get loose leaf tea in Gainesville, FL?

I have no background with Florida at all (except for visiting Disney World as a child) but this is a good chance to answer the more general question. The short answer: there are great options to buy tea online, and you would get the best teas in a wider range of types at the best value there. Leaving that aside let’s consider how to find local shops.

It goes without saying Google search would work, doesn't it, or some form of yellow pages review, online or the paper version, if those still exist.  Another good starting point is Google Maps, because it’s easy, and something right outside the range of your search term range might turn up (in the greater metro area, or next small town over).  Oddly nothing looked promising to me, for better tea, but that can happen. No need to take my word for it; you can look at Maps results for “tea Gainesville FL” yourself.

I checked what Maps shows for our Chinatown too (in Bangkok):

That's just sad; one cafe, when there are tea shops all over the place.  Jip Eu is my favorite, and Sen Xing Fa is fine for other range (both starred), and there are lost of others.  I did the same search using the Thai character for tea, "cha" (ชา) and that didn't work either.  I guess this is why Google search might not be enough.

Next you can check specific “tea map” resources. I only know of two, and there may be others, but those aren’t a bad place to start. They’re on tea-themed sites, Steepster and Tea Chat. The content at both sites tends to be dated, and it seems unlikely that if a new shop went in over the last 2 to 4 years (when tea interest sort of ramped up) that those references would have been updated.

A lot turns up but at a glance that doesn’t look very promising to me, again guessing from the business names.  A closer review would confirm if my intuition is right, if those are instead probably ok places to pick up a bubble tea, conventional English Breakfast tea, or maybe even a tea and flowers blend, and scones, which aren’t interesting to me.  Scones can be nice but there are bakeries for that sort of thing.

To me this represents two strikes so far. There must be lots of ways to network to the information about local options, and you only need to talk to one right person for them to lay it all out for you, but I’ll only cover one more approach: search Facebook tea groups for leads.
I searched in Tea Drinker’s (one of my favorite FB tea groups, but the one I’m an admin for is International Tea Talk) and turned up just that:
Tea Drinkers  posted by Tom Wood, 10 January:

Tea enthusiasts-Once again I am holding my 11th Butterfly Tea on my farm near Gainesville, Florida; February 17 from 10 AM to 4PM. My wild plum trees will be blooming and attracting butterflies. I will be serving at least 20 kinds of tea from China, India and elsewhere and displaying teapots, teaware, and tea books. There is no charge for this event…

That person posting the Quora question just missed that event, by less than a month, but Tom Wood knows all about the local tea scene, for sure, and may hold another event later.

As far as looking around different places for where discussions might have occurred there are other FB tea groups, or you could do a discussion section subject search on Steepster or Tea Chat (those sites I mentioned), or the Reddit tea subforum gets a lot of discussion traffic.  I'm an admin for an International themed group, International Tea Talk, a good place to ask about options outside the US, or about producers, and this Gong Fu Cha tea group is for people a little further along the path than most groups, mostly focused on the US.  Area-specific groups are nice, since they'd mention event options, and I'm in one for NYC, Los Angeles, and for Colorado.


The only Reddit discussion that came up said Volta is ok, and I suppose maybe it is:
Tea in Gainesville, FL? • r/tea

It seemed it wouldn’t be from that title, on the Maps and Steepster results as "Volta Coffee, Tea and Chocolate," but also selling two other things isn’t necessarily a bad sign.

Since I am using this for a blog post I went back to check Tea Chat's Tea Map section, to see how it compared (something I only mentioned as an option in that answer): 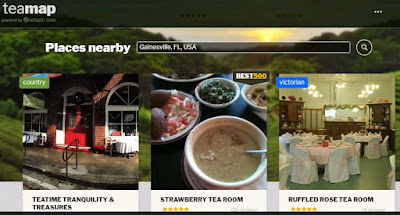 Scrolling down it also pulled up one more option, Tea With Lee TEA WITH LEE  (at 944 E Silver Springs Blvd, Ocala, FL; I'm not sure how close that would be).
I might be too quick to judge that all these tea room options don't offer good loose tea; they really could.  If you click on the reviews there in the Tea Map section they don't mention the teas at all, only scones and such, which I don't take as a good sign, but it's hard to interpret.

Obviously a reference like Yelp could also work (the link to the Gainesville results), but the results seem to repeat the earlier ones.  That might work to untangle what places really sell, for example to check if "Kung Fu Tea" is really a Gong Fu brewing oriented place or not (seems not, from the reviews):

Kung fu tea has the hands down best boba tea in Gainesville. I've lived in Taiwan and watched the development of boba tea grow there into an international export. This place is the closest to authentic boba tea you can get.  Other places in Gainesville, its so artificial and the tea is just so unnaturally bitter. Here, I can actually taste the tea.

So for bubble / boba / Taiwanese milk tea this is the place; good to know.  Trip Advisor would be roughly the same sort of resource as that, also tilted towards cafes over loose tea shops (their results for Gainesville; more of the same).

Reddit's tea subforum also has a Google based tea map; I hadn't realized that when I first posted this.  There aren't that many shops on it, and only one for all of South East Asia.  That would really be the key to any one reference being useful, including a lot of locations and staying up to date.  The format looks really good though, very well thought through.

I can only think of one more trick:  if you could turn up a local tea blog then that person would have done all that sort of work for you, putting way too much thought an effort into researching tea source options and teas.  Google search for "Gainesville tea blog" would probably find one (and I checked; it didn't, really).

If some local blogger's page was only being read by a few friends and their Mom they would be way back in the search results, probably further than I looked.

Online shopping is really the best resource anyway, and it's nice that the options are as leveled as they are everywhere related to that.  But it is great to stop into a loose tea shop and talk to a knowledgeable staff, and try teas before you buy them, or attend a tasting, and to support local businesses so the options stick around.  It's not really related but I will add a little about online sourcing here.

Buying tea online instead of in a local shop is a different subject, but a good option. I wrote a post about some of my favorite online resources not so long ago, but keep in mind I live in Asia (in Thailand), so I’m talking about more direct sourcing in that, how to order from places like China. That sounds like the shipping would be way too high, but not so much, since the tea prices tend to be much lower to offset that.

Note that I'm not saying US based vendors (or vendors in other countries) are generally a bad option; obviously there will be a wide range of better and worse options for tea quality, selection, and value related to domestic options.


I'd expect three of the better options I mention in that post would be Yunnan Sourcing,  Farmerleaf, and Hatvala (who offer free worldwide shipping on orders over $30).  Hatvala sells fantastic Vietnamese teas at prices that are really a little too low (probably as well not to mention that to them).  Both those other two sell samples, which isn't a bad way to get started, when new to tea, it's just as well to bear in mind what the per-gram cost for those is, to make sure it still makes sense.  If Hatvala is selling a version of tea for $4-5 for 50 grams or you might also order a comparable tea as a 10 gram sample from another vendor for $3 that shouldn't take much thinking through.  Quality dictates what a tea should cost, and it's hard to only say a little about that; once you actually try the teas you know where that stands.

All three of those vendors would end up selling tea for less than most US online vendors, as long as you bought tea in sufficient volume range, probably at break-even or a better deal when buying around $30 worth.  To be clear on context, I'm probably seeing Farmerleaf as a better than average resource partly because I happen to like Yunnan style teas, pu'ers (sheng and shou), and also Yunnan black teas (Dian Hong).  It does also help that the teas I've tried from them seem to all be of very good quality (which is also true of Hatvala).

Yunnan Sourcing (which doesn't require any description for people well-exposed to tea sources) sells a little of everything for Chinese tea, and a lot for pu'er, so although it might take more judgement and sorting to figure out what's going on a full range of options are there.  One downside:  they sell everything, instead of curating, so all of it might not be great tea.  In the last order I placed I loved three of the teas, disliked one, and was on the fence about another.  The Liu Bao (a hei cha) was really musty from wet storage, so that wasn't just a preference issue, and that Dan Cong black tea was just ok, a bit tart for my taste, so that was just a subjective preference issue. 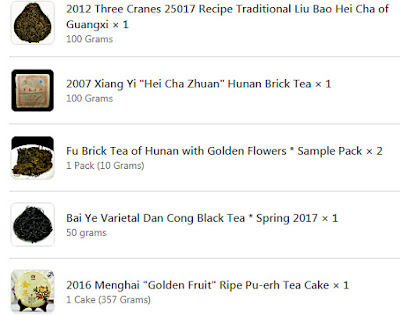 I'll mention a few, since I've been into that for a year or so now too.  I'm also converting one on why not to boil water for tea in a microwave to a post (it's a draft now) so I'll just mention a few others that seem to stand out.  You'd be right if you thought I'm taking this tea discussion, research, and writing hobby a bit far.

What is the history of tea?

Where can I get the highest grade of white tea at a reasonable price?

What kind of tea is typically served at Chinese restaurants? Why is that tea served?

Why do many (apparently) expert tea drinkers throw out their first infusion without drinking it?

Does tea have as much caffeine as coffee?

What is the difference between oxidation and fermentation in tea manufacturing?

How do I prepare chai?