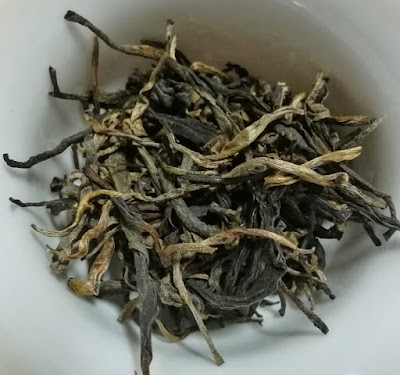 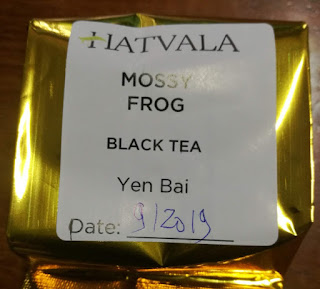 This is the last of a set of samples sent by Geoff for review; many thanks for that opportunity.

I've said over and over that Hatvala offerings represent some of the best Vietnamese teas on the market, sold at great value for tea quality.  The last set of Assamica based oolongs I reviewed added novelty to that; I've never tried Assamica based oolongs that completely pulled off being in normal oolong character range as those did, not different than any above average more-oxidized rolled oolong.  Prior sheng versions were also novel and great, green teas distinctive and pleasant, and more conventional oolongs also very solid.  Vietnamese teas in general don't get the respect for range and quality that they deserve.  Hatvala sells a good broad-character selection but that's just a good start on what is out there.

I'll taste this version without reading any background, finally getting back to a simple review, no comparison, non-standard type, or aging theme to go on about.  Per usual I am adding a vendor description at the editing step though:

An exclusive small batch artisan produced black tea from Suoi Giang in Yen Bai province – one of the most respected areas in Vietnam for wild tea processing.  Mossy Frog leaves carry the rich malty aromas of black tea but when brewed is far more complex with flavours ranging from spice, pepper, red bean and dark chocolate through to woody and caramel.  The bright dark amber liquor has a pleasing full-bodied mouthfeel with sweet aftertaste.  The leaves, sourced from deep rooted, slow growing ancient trees, can be infused up to 5 or 6 times and still be at their best.

Mossy Frog uses similar harvested green leaf material as our other Suoi Giang teas.  Leaves are picked from old, wild grown trees scattered across the mountain by ethnic H’Mong families.  The tea is produced in a small workshop using traditional hands-on techniques that limits batch size to between 15 and 20 kg of fresh leaf – or 3 – 4 kg of finished tea.  Mossy Frog is produced from one bud and two leaves and thus contains a high proportion of tips.


This is selling for $6.35 for 50 grams.  That's either a good price or a great price depending on how good the tea is, which I'll pass on a detailed impression of. 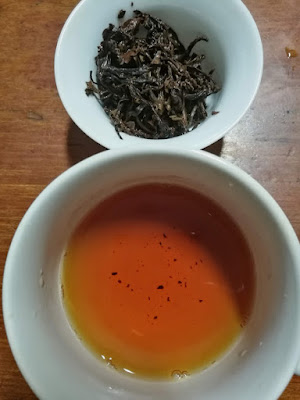 Dry leaf appearance is nice, long twisted leaves, varying in color.  Dry scent is sweet and malty, with apparent fruit range.  Just from that alone it seems similar to their standard Wild Boar black version.  I've not tried that in awhile but I did drink a good bit of it back when I last did so I'll probably attempt some comparison.  That's usually not a good idea for comparing a tea across a long period of time, so take that with a grain of salt.

It's interesting.  Malt does stand out most, not paired with as much astringency as is common to a lot of black teas, but then I've been trying milder versions of Assam this year as well.  It has a lot of depth and complexity; there is a lot going on.  There's more warm mineral range than is common in black teas.  That would be easy to miss, to interpret this as covering warm versions of wood tones, with related sweetness, and a hint of some sort of fruit, and not catch it.  It gives it an unusual depth.  The malt form isn't unfamiliar; it is that mineral-related malt that turns up in better orthodox Assam versions.

The feel structure has an edge to it but that doesn't extend to dryness.  It's not really soft and full in the normal sense either, balanced in the middle.  There is a trace of dry edge, which only appears in black teas in this particular form, but it's limited in this.  That was a lot to experience for a relatively fast first infusion; it will be interesting to see how this unfolds.  Since intensity is pronounced and astringency and feel is a potential issue keeping that fast will work better; I'll try an infusion time of just under 10 seconds. 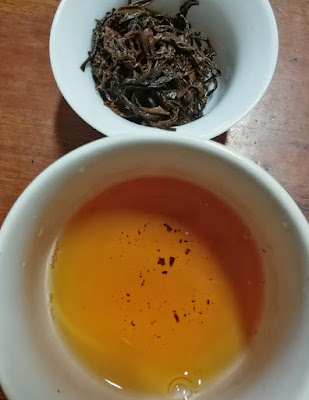 An unusual toasted marshmallow flavor picks up a lot.  I don't remember experiencing that particular flavor in a tea before.  It's like the flavor right in between when those a light brown and are a bit scorched, so brown, and significantly toasted.  Obviously sweetness stands out, since I'm describing it as tasting like a toasted marshmallow, and malt is still present, but secondary to that flavor.  Feel softens just a little, losing some of that dry edge, maybe as a function of using a fast infusion, or it could've transitioned naturally.  The mineral and dark wood tones shift a little, but not so much. 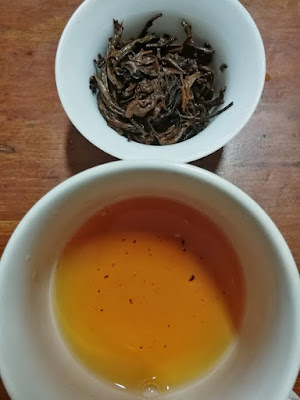 It reaches an even more pleasant balance in this round.  Toasted marshmallow is still a main flavor but the rest shifts to balance it very evenly.  It still has body, and maltiness, but astringency has dropped off to give it a smooth, full, round feel.  The rest is harder to split out due to being so evenly balanced across so much range but it seems similar.  A fruitiness might be picking up a little, a touch of dark cherry.


Malt picks back up, again the main flavor.  Minor shifts in infusion strength would vary how the aspects come across, the relative order of intensity.  Preparing this Gongfu style has that as an advantage, that you can try the tea prepared in different ways by altering timing slightly, even if that's not the intent (and you are just inconsistent), or even if it doesn't transition naturally as much as some types.  The overall balance is what stands out.  Sweetness is good, with a fruitiness more present now than that toasted marshmallow, along with mineral base and dark wood tone.

To guess how this compares to the Wild Boar it seems more complex and more refined to me, trading out some astringency for flavor complexity.  The fruitiness seems comparable, similar to how I remember that, towards dark cherry, just not distinct enough to clearly identify as that.  I'll try a round brewed slightly stronger, but I think these have been essentially at optimum, with lots of flavor intensity and full feel character.  Even some degree of pleasant lingering aftertaste joins that.


Dryness does increase a little with it brewed stronger, and malt does ramp back up.  That toasted marshmallow returns stronger as more of a toasted sugar, like the browned top on a creme brulee.

This would make an awesome breakfast tea.  It's about two full levels better than anything that finds its way into a tin of blended tea.  It would work really well prepared at different infusion strengths, and would pair well with food.  It's complex and distinctive but at the same time the character range is basic, normal, so that drinking it over and over wouldn't get old fast, compared to a tea that's pleasant in a more non-standard way.  Flavor complexity and actual flavor aspects are a bit unusual in this but general character is only novel for the light astringency and dryness balancing a soft fullness particularly well.  That dark wood tone, warm mineral, and light, non-distinct fruit all ground it in a standard range for black tea, just a much better version than typically comes up.

It's slightly closer to better orthodox Assam in style than Chinese black teas.  Those span a lot of range at this point, since better and more novel versions keep turning up from smaller producer sources.  This would probably compare really favorably to any larger plantation teas, even the best such versions. 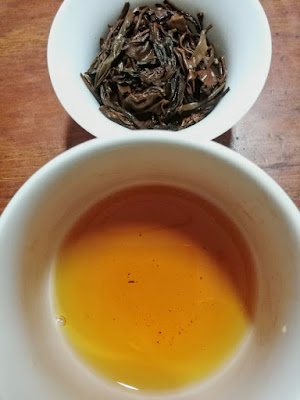 It's not tapering off in terms of intensity and complexity much at all, although I did brew this for around 15 seconds instead to compensate for fading a little.  It should keep going like this, with character varying for using longer and longer infusion times.  I don't think a flavor list and character description really does justice to how pleasant this comes across.  It all balances really well, and the more novel range for flavor input is all completely positive.  It couldn't be any cleaner in effect, with sweetness, feel, and the rest all integrated perfectly.

The only limitation is that the general style is within a standard, familiar range, but that could as easily be interpreted as a strength.  I tried a couple of the best standard-type Assam versions I have yet to try not long ago, Latumoni Summer Tippy Assam, and this would compare reasonably well to those, probably more just slightly different than better or worse, but in a similar character / style range.


Range of flavor complexity is dialing back a little, with malt and dryness picking back up, probably related to using a slightly longer infusion time, or also to the tea fading.  That warm mineral is increased in proportion to the rest again.  It seems like it has a few more positive rounds to go, it just won't be quite as pleasant as earlier.  Not far off it though; I'd essentially describe it in the same way as rounds 3-5, I'm just noticing a difference for having just tasted those.


I've pretty much said it all; it was quite good black tea.  For the price the value is really good; double that pricing rate would still seem fair to me.  It was similar in character to really good Assam, versus well above average Chinese black tea, which is probably typically priced at a slightly lower scale, but there isn't that much Assam out there on this kind of level.

I did brew it for another five or so infusions, and it could have kept going after that.  It was thinning in flavor profile and the warm mineral tone was getting a little edgier, changing in relative level and form related to the longer brewing time.  It goes without saying that this would also work well brewed Western style.  To me Gongfu brewing isn't really more messing around at this point, since I tend to brew tea like that with breakfast even when I'm in a hurry.  Character would probably vary a little based on any changes to parameters; this seemed like the kind of tea that would shift aspects a little based on altering minor factors like timing or water temperature.

About Hatvala, I'm not sure when I last mentioned they sell tea in a Saigon / Ho Chi Minh City cafe in addition to online.  It only seems to come up in discussion of where to visit in Vietnam.  I haven't been to HCMC in about 8 years, since I got further into tea and heard about this vendor, so I've not been there, but friends from the US and Indonesia did drop by not so long ago, reminding me to mention that.  They write a blog that includes pictures of that store and more on what they're up to, with some remote location photos from around Vietnam where these teas are coming from.  Vietnam is as beautiful as any country on earth, as I see it, but that's a separate and longer story.