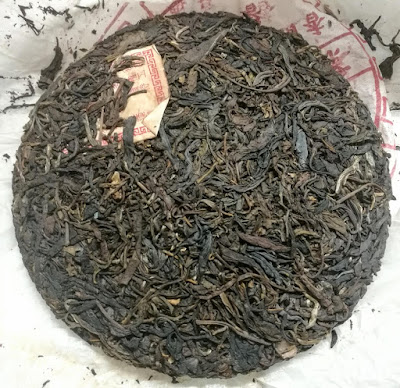 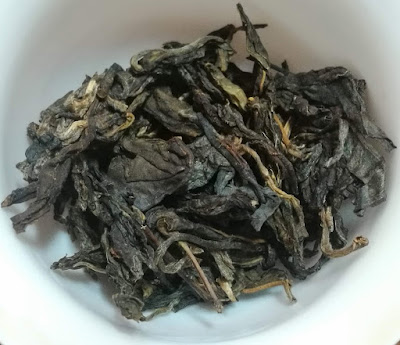 In visiting that Chinatown shop I keep bringing up, Jip Eu, along with the fellow tea enthusiast I also keep mentioning, Ralph, it came up that I never try the same teas twice there.  Sometimes we try versions of what are standard for them, Wuyi Yancha oolong versions, inexpensive ones that are sometimes better than you'd expect, or moderately higher cost versions that vary a lot in character.  Or other more unusual teas they happen to have around; that included a Japanese version of sheng not so long ago.  I've tried and bought decent Dan Cong and Longjing there, and sometimes it's tisanes instead, or teas they don't even sell, an unusual hei cha or whatever else.  Once they had just finished trying a 40 year old version of Longjing when I stopped by.

Ralph--who also writes a tea blog--kept asking about different local Thai teas, leading to us exploring more of those.  Sometimes Kittichai even makes local Thai tea versions, not usually to sell, as a side project on an outing, but sometimes for selling them too.  They're usually pretty good; he comes from a tea producing family and made teas in Anxi and Wuyishan in his younger days.  He mentioned making cakes of sheng some years back, and we tried one, this tea I'm reviewing. 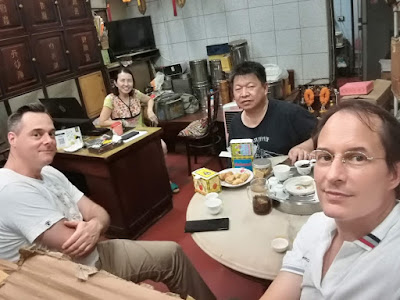 This is most of it for back-story; I don't even remember the age.  I asked Ralph again and he said that he thought it was picked in 2012 and pressed in 2014, or at least close to that.  7 year old tea can be relatively lightly fermented, depending on storage conditions, but here in Bangkok that's a long time.  Kittichai said more about harvesting the tea, about the source, but even that day I don't think I had a good feel for plant types or ages or the rest.

The character was really unusual; it didn't taste like sheng I've had before, any type of it.  It was a bit closer to sheng pu'er character than that Japanese version was (which I'll get around to reviewing; Kittichai gave me some).  I'll let the review describe in what sense that applies, and why I liked and was curious about how it would develop further. 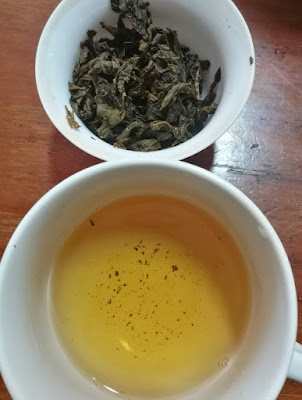 First infusion:  part of the appeal and downside (both) of this tea is that it's unconventional, which already comes across clearly in the first infusion.  It's good, just unusual, and good is always relative.

Where to start; it has some thickness, but the rich feel is both less structured (toward dry) and full.  That aspect is sort of like how oolongs are, but present in a slightly different sense in some sheng.  Then it does include a slight resin-like feel, maybe closer to how some Yunnan black teas come across.  There is very little astringency and bitterness in this tea version, which could tie to age.

Flavor includes pleasant sweetness and decent balance.  It's further towards autumn leaf than sheng tends to get, not quite warm enough to match black teas with similar range.  There's a slight spice or medicinal edge to it.  I'll try to break that down further in later rounds.  It's there to be tasted now, it's making the association that's an issue, along with some background noise factoring in.  My wife thinks we should go see a Frozen 2 showing in one hour, but I think seeing one in 2 hours and 20 minutes makes more sense.

I think this unusual character must relate to using a mix of wild tea plant types (he harvested it himself, along with help, in the North of Thailand, from wild growing plants).  Those growing conditions probably affect flavor profile too.  And processing would factor in, but I'm definitely not going to guess further, and say which input led to what.  I try a lot of old-plant natural-growth sheng from a lot countries, kind of regularly even, and it can be essentially identical to Yunnan versions, this just isn't. 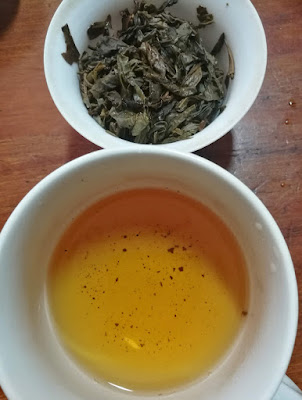 Second infusion:  that shifted a lot.  For someone not expecting that it could be off-putting, since the character is even more unusual.  When I tried this in the shop I was wondering if it would age well, and I really don't know, but curiosity got the better of me related to buying it.

What had been a dried leaf effect with a bit of medicinal edge turned into even more of an edge, not exactly conventional bitterness but towards that.  It reminds me of the smell of fallen and fermenting wet leaves, but leaves that are still in that process, like the smell of a very wet fall day.  What I'm calling a medicinal edge could be interpreted differently, as a slightly sour food item, as something lightly cured.  I tend to not use "sour" as a tea description much, and it would seemingly be negative if I did, but it fits here, since this is moderately sour.  It all still kind of works, although I expect later infusions to be cleaner in effect, and somehow suspect this will transition into something else over a few years.

At this particular infusion this doesn't work well.  The effect in between sourness and bitterness isn't way out of balance but it's unconventional and not necessarily positive.  I think it will improve, although I don't clearly remember a particular transition cycle. 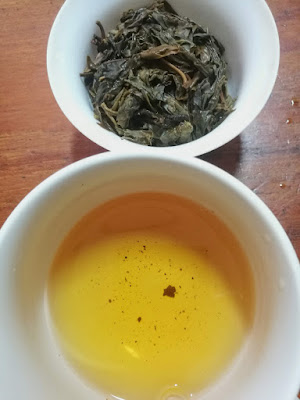 Third infusion:  brewed slightly faster (a bit under 10 seconds) the balance is much nicer, although some of that still could have been early-round transition, since that comes up a lot with sheng.  The sour / bitter effect is diminishing, pulling closer to a light bitterness.  A vegetal range (the wet but not fully fermented tree leaf) is in a nicer balance, with sweetness and warmth picking up.  It's clean in effect; it would seem natural for this mix of flavors to not be that way.  A warm spice note picks up, not so far off clove, or really most people would probably just say that it's clove.


Fourth infusion:  even better, although not so different.  Rich feel picks up; the structure (feel) is novel but not far off that of quite nice Yunnan sheng versions.  A dried leaf version warms, shifting to be closer to a drier version of autumn leaf.  Spice is interesting in this, the "towards clove" part.  Mineral is pronounced, more so now, like a light stone (limestone?) leaning just a little towards corroded metal, but in a generally pleasant sense.  As is typical flavors being clean, sweetness helping, and feel-balance complimenting the rest makes it work.  It's a completely different tea than it was two infusions ago, although that unconventional range (slight sourness, unusual bitterness, partly fermented leaf vegetal range) only faded and expanded to balance better; it's still a part of it.  It'll be interesting to see how late rounds go; we didn't get to that in the shop.


Fifth infusion:  this shifted a little to include a different spice range.  It's towards a very aromatic wood, past cedar and redwood, onto closer to incense bark spices, frankincense and myrrh (which I can't distinguish separately; my own hippie days are pretty far back now).  Sourness has faded just a little more, still a contributing aspect that some people could find either pleasant or objectionable.  Related to expectations across other sheng it's not normal, and therefore mostly negative, but aside from that, tied to just how it comes across, it's closer to neutral, just different.  Related to considering how this will age, it would seem to be anyone's guess. 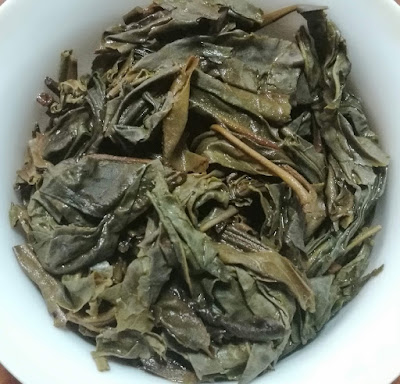 Sixth infusion:  it keeps improving slightly, becoming catchier.  The warm, novel spice range keeps ramping up, thick rich feel improves, and the touch of sourness and odd vegetal range fades as a lighter and lighter contribution.  To me this is quite pleasant just as it is now.  I could relate to a sheng purist not really relating to it; it's unusual.  Aftertaste is even pronounced in this, not at the far end of the spectrum as sheng goes, but above average.


Seventh infusion:  I'll have to leave off drinking this to go see Frozen 2; not such a bad thing.  It's quite pleasant at this round.  I did get back to trying it later but it seemed to mostly just fade past that.


I'm not sure what to make of this tea, or where it will go from here, related to ongoing transitions.  For any sheng pu'er in a more typical range I can compare trying versions of different characters to older versions that I expected had been similar.  Not for this.

It's odd that the flavor isn't diminishing, if this had been closer to green tea at the start, or even black tea, for that matter.  It does seem like sheng pu'er, related to feel and aftertaste, and the way versions can be so complex across all levels.  The flavor range just isn't familiar, and the feel / astringency isn't identical, with no significant bitterness present (normal for sheng this old and fermented to this degree, depending on the starting point).  I wouldn't be surprised if that somewhat odd initial character diminishes, and flavor gains warmer tones and depth, with feel thickening.  I guess we'll see. 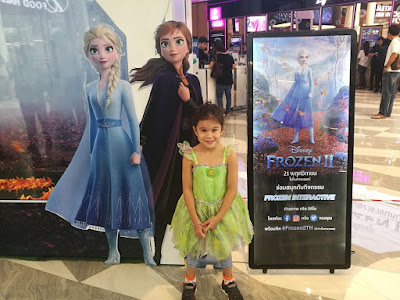 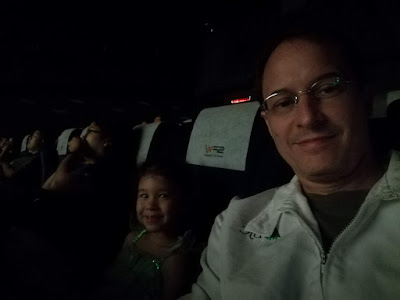