I'm comparison tasting a Thai version of Assam along with an Assam version; that seemed a good way to establish a baseline.  I really liked the Thai sheng version from Aran (reviewed here); it just seemed a bit like green tea to me, in between type categories in style.  This struck me as quite close to an orthodox Assam, when trying it a week before doing a review, with this comparison filling in just how similar.  The outcome:  quite similar.

The Assam Teehaus product was a version that Maddhurjya Gogoi sent me last year.  His teas are pretty far up the scale for as good as orthodox Assam gets.  I think maybe versions from Oiirabot and Lautimi, sold by Tea Leaf Theory, might have matched my preferences just a little better, but that may have just related to being that much closer to Chinese tea versions in style, not to actually being better.  Dian Hong, Yunnan black tea, is a personal favorite, and tea really close to that in character might seem better to me, versus that actually relating to some objective improvement in quality.


I reviewed those Assam Teehaus versions here.   Comparing the label that version he had described as a "blended Assam orthodox."  From that review it sounded like I liked the other version slightly better, that a citrus aspect worked better for me than a more pronounced aromatic spice aspect.

For anyone into reviewing other range further this review from last year covered that Oiirabot version I mentioned,  and the Tea Leaf Theory Latumoni producer version.  Really good Assam is out there, there just can't be that many producers' versions on the level of all these.


I'll describe the Assam version--the one from Assam, India--first, since I'm using it as a baseline.


Maddhurjya's Assam (Assam Teehaus):  I didn't let this brew for long so it's a bit light.  The flavor is nice, complex and balanced, earthy with good sweetness.  Distilling that to a list will go better next round.  Some fruit and a hint of spice indicate it will show even better complexity as it evolves.


Aran Thai Assam version:  hard to evaluate in comparison for both being so light this early but this holds its own.  It's clean and full flavored, with some decent feel kicking in already, even though it's not fully wetted yet.  It's not so far off the other in character; more on that as a listing next infusion.


I tried to back off the proportion just a little from what I usually use to brew teas Gongfu style but in the end this was essentially that; the amount that would all but fill a gaiwan once the leaves saturated.  Too much tea to drink in one go too, especially since I just had some fruit with breakfast (fresh mango and banana with yogurt, a personal favorite), and drinking loads of Assam along with that doesn't work well.  Pastry stands up to lots of tea input better, or breakfast cereal. 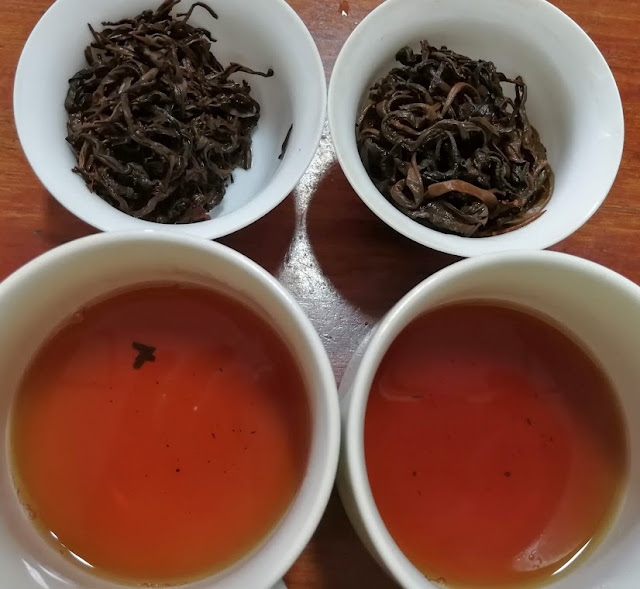 Assam Teehaus:  that is nice.  Warm sweetness kicks in, with lots of flavor complexity.  There is malt but it's relatively subdued compared to the level in a lot of Assam versions, that main-aspect, dry-feel related form.  Beyond the malt some molasses sweetness adds a dimension, and warm tones like aromatic wood or even mild spice contribute.

It would be possible to interpret some flavor as dried fruit, towards dried tamarind, but it's not pronounced, so it would be just as natural to leave that off a list.  I don't see it as floral but that also wouldn't be an unreasonable interpretation, along the line of rose petal.


Aran tea Thai version:  this experience overlaps a good bit with the other tea, more than I expected.  That malt is so subdued in this, and slightly different in form, that it stands out as a difference, but it is still common space, to a limited extent.  Complexity is on a similar level but the flavor range is different.  This leans more towards aromatic wood, or even cured leather.  That could easily be musty, but in this version expression it's quite clean.  It also hints towards a good bit of other range, the floral, towards warm and sweet dried fruit.  A little more dark wood tone seems to show through in this.

In tasting each back and forth the first (Assam Teehaus version) tastes more like dried cherry than it had without that direct comparison, a deep, rich flavor, more into fruit range than the other extends.  The feel for both is nice, and the way there is some pleasant depth of structure to them, but they're just soft and full, not astringent at all.  Even aftertaste range adds just a little depth to both, just not so much compared to how that often goes for oolongs and sheng. 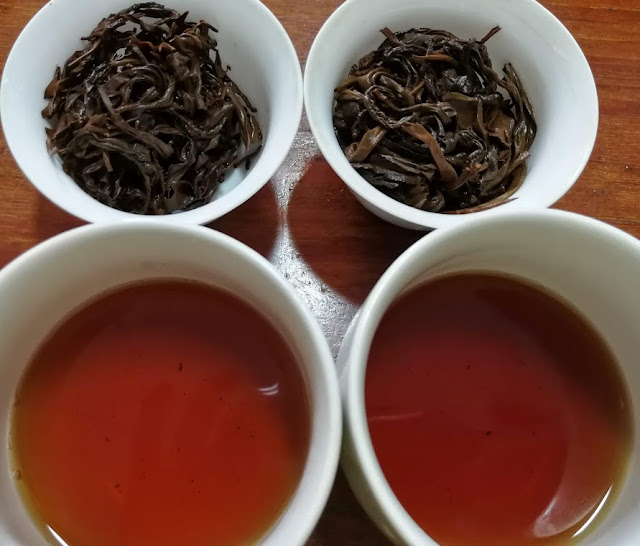 Assam Teehaus:  a warm aspect seems to bump up a bit, towards spice, but it's a little non-distinct.  The rest is similar, maybe just shifted a bit in aspect range.

This is pretty good tea, quite far up the scale of how Assams go.  Tea blog reviews tend to be about making minor distinctions, and that's what's going on here.  There's a good chance that I like this tea better than I did in the original review for brewing it Gongfu style instead.  For a lot of black teas it kind of doesn't matter, but for better quality versions being able to adjust outcome a little round to round, and experiencing the minor transitions, really can be more positive.


Aran tea:  similar; this is picking up a bit of depth too.  Given that I'm infusing both without using a timer that could also be it, a shift in brewing time.  Or maybe that's just how it would go for a tea like these being infused for around 1 1/2 minutes previously, where they would tend to be in a cycle.

Tasting one after the other the first (Maddhurjya's) is slightly sweeter and brighter, and the second (Thai version) a little heavier on dark wood tone, but again they are a lot closer than I remembered from the first try.  I tend to not frame interpretation as a clear "how good" judgement since that's just subjective, tied to preference, versus trying to communicate details of the experience, but both are good. 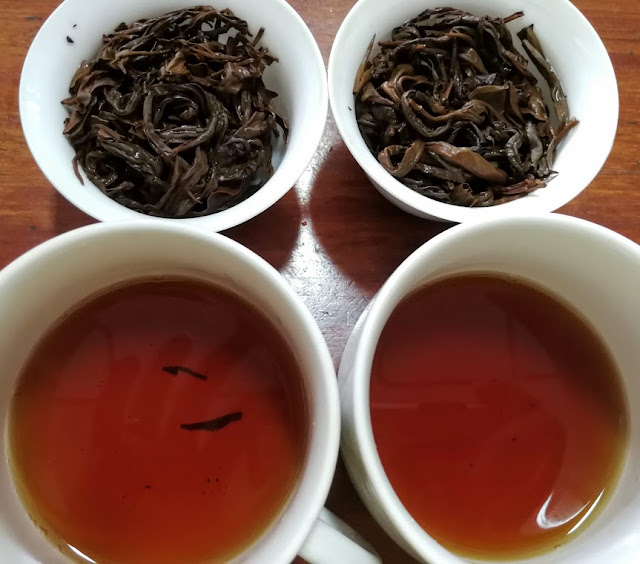 I'll let these go longer to check on that effect, and probably let this drop after.  These will brew a couple of additional rounds, for sure, maybe even another three or four, but the point here is comparison, not adding every last detail.


Assam Teehaus:  more of the same, if anything slightly better, smooth, sweet, rich, and complex.  This tea really is better than I remember it last year.  Maybe it improved with age, or maybe brewing it this way worked out better than trying it prepared Western style in the first review.  Or other subjective differences always come into play, how I feel on any given day.

This house is a little chaotic this morning, making it hard to generate long aspect lists.  It would seem odd if that translated to liking the teas better, a slightly higher degree of background noise, but I guess you never know.


Aran Thai black tea:  side by side differences stand out but tasted a week apart these could seem relatively identical.  The Assam version is slightly sweeter, a little towards dried cherry fruit versus dark wood tone, but they overlap more than they are different.

Both are good.  For the Assam I'd expect that; Maddhurjya has been working at making better and better Assam versions for a few years.  It's odd that a Thai producer could get so close to that in outcome.  Again I think there may still be just a little room for improvement related to the absolute best Assam versions I've tried, but these are definitely very pleasant.

Really good tea!  The Aran Thai version, I mean; the Assam Teehaus I liked slightly better but both were quite good.  In terms of value this tea is more than worth the modest pricing that I paid for it.

It works on so many levels; this style of tea is forgiving related to how you prepare it, with relatively little astringency to brew around.  Brewed very light the intense flavor still comes across, and relatively strong still works, although some sort of medium is best.  I suppose you could even add milk to this, although it seems better to adjust your preference to appreciate how it doesn't need it, and wouldn't be improved by that.  Brewed at really high infusion strength it would probably be great with vanilla ice cream, at the risk of disrespecting the tea.

This mentioned that I like this style best prepared Gongfu style, but really using a Western approach is fine.  For lacking much astringency it would also work made "grandpa style," brewed in a tea bottle, and drank without separating the leaves back out, adding more water for a second or third round.  That's a great way to bring tea for car travel; carrying a half-liter thermos along even gets you that next round without running across hot water somewhere.

I just tried that with the Aran green tea version yesterday (at time of editing this post), and it worked well, it was just a little bitter.