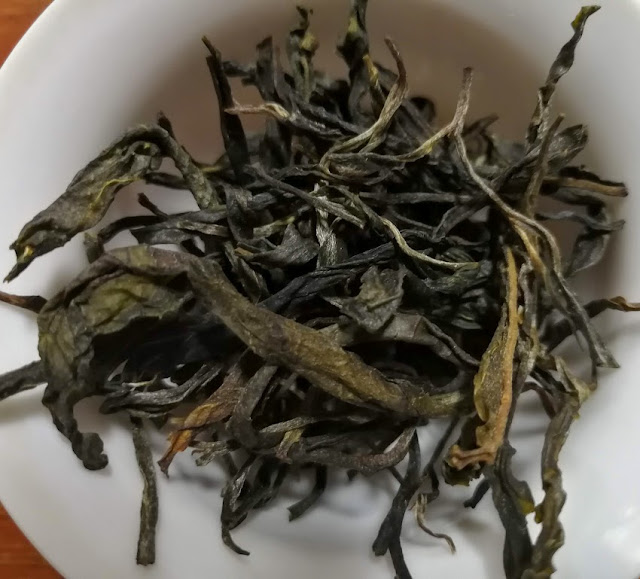 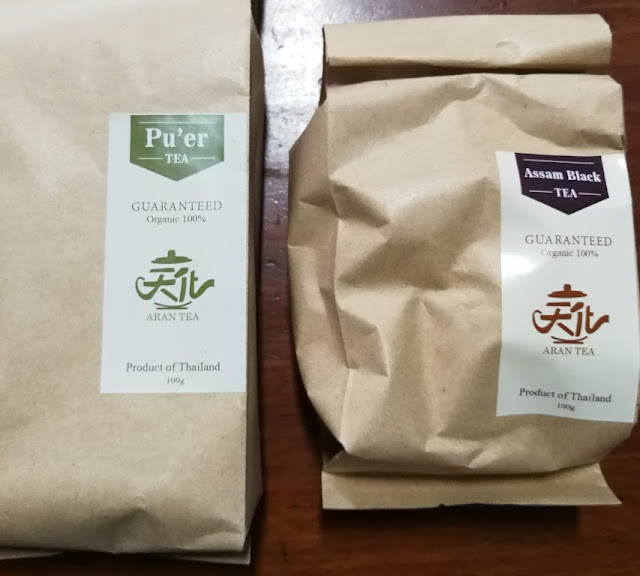 An online contact mentioned producing Thai versions of Assam black tea and sheng (pu'er-like tea) in the International Tea Talk group that I admin for.

That's most of it for background.  They have a Facebook page, which would show some pictures and add a few product details, and would work for contact.


I usually mention when vendors provide samples for review so I guess that I might add that I bought these teas, 100 grams of each, for a reasonable price, the standard range here in Thailand.  I'm not opposed to buying some tea, I just don't have budget to try a little of everything, so it's nice when some vendors help out with that.  The review will be the same; I'll say what I really think.

I've already tried the Assam (variety Assamica based black tea made in an Assam style, which kind of goes without saying) but starting with the sheng still makes sense, since I've been more on that page for a couple of years.  I've tried enough Assam in the past year to place the other tea against the best range of versions (I think), but maybe I'll do a comparison review post anyway, since it's interesting trying similar teas side by side.

It's strange skipping past the requisite claims about this being from ancient trees, wild grown, pesticide-free, and so on.  It probably is all that, although photos from their Facebook page show seems to show plants of different ages growing under different conditions.  It's as well to just judge the character anyway.  From the dry tea scent, which is rich, sweet, and complex, this will be pretty good.  The color is a bit dark; it will be interesting to see what that ties to in terms of wetted leaf appearance and brewed tea aspects. 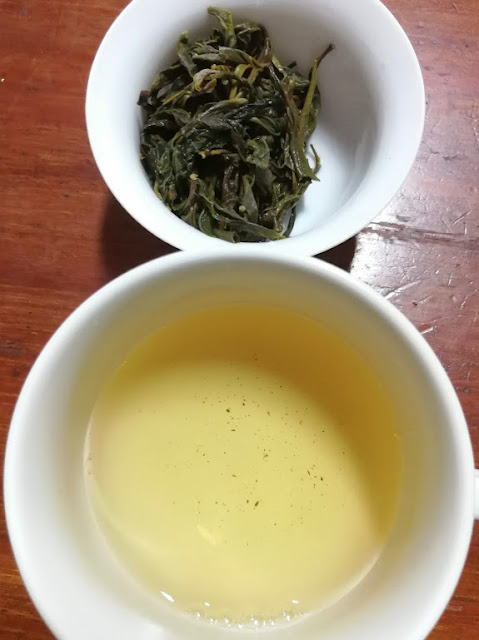 First infusion:  this leans a little towards green tea character, a slight vegetal edge, and other parts it would be hard to completely describe, part of the feel.  That's not to say that "they've got sheng wrong," character can vary a lot for those, and it's impossible to identify related aging potential based on the first sip.  It tastes like an exceptionally good green tea, well balanced, very fresh, not astringent, with good sweetness, and complex.

The vegetal range is towards fresh green beans.  I think a lot of people would prefer this to even a very good sheng, if they just weren't on that sheng page.  Someone looking for sheng who doesn't like green tea wouldn't care for it. 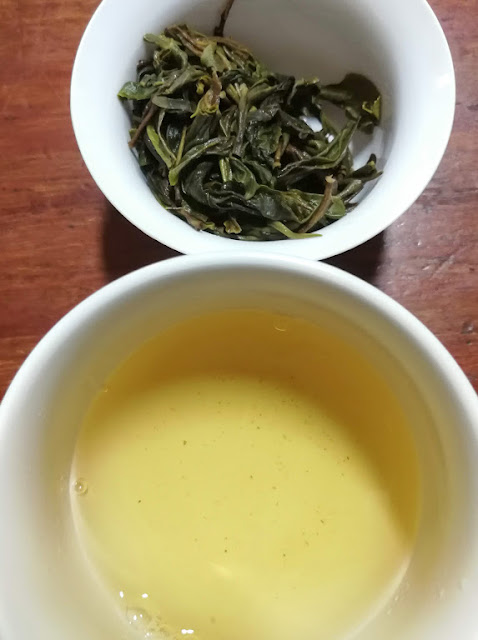 Second infusion:  still mostly very fresh green beans.  A hint of bitterness is more into sheng range, but it splits the difference, between the two, to be honest closer to green tea in style.

It's the fresh and sweet version of green beans, prior to any cooking, nothing like frozen or canned types.  Ordinarily if I reviewed a sheng that tasted like vegetable the description would be more negative, but I do kind of like this tea.  I say over and over that green tea is my least favorite main type, and that's true, but I have tried some versions that work as exceptions.  One Thai version from Tea Side, a steamed green tea, was a good example of that.  I usually buy Longjing once a spring (a main Chinese type, a pan-fried flat leaf produced version), I just haven't got around to that yet this year. 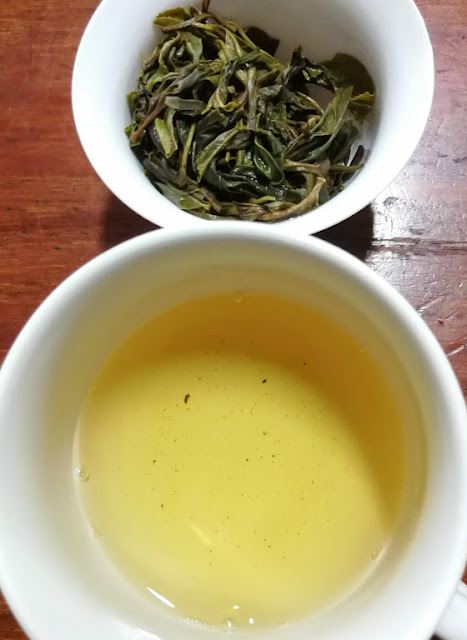 Third infusion:  not transitioning so much.  It may not, since green teas tend to less.

It's obvious enough but sheng and green tea are two of the most closely related types.  Green tea is heated to stop enzymes from reacting to oxidize the tea, and sheng is just heated slightly less, leaving those compounds more active to enable aging transition.  Or so the general story goes, and also the actual reality.

This has pleasant character and good complexity.  It's bright and clean, and complex, with plenty of sweetness.  I'm not sure how it would age given the aspect range it's in, but it's fine as it is now, so maybe as well to not even check on that.

They sell cakes as well, compressed versions, and that complicates things a little.  This probably would still be quite pleasant in a year or two but I'm not sure it would improve.  It's conceivable that it could work for long-term aging, it just lacks the aspects I see as markers for what does commonly improve through that sort of transition (sheng fermentation).  Some degree of bitterness is a good sign, and a characteristic type of astringency, a structure to the tea. This has a touch of bitterness and a little dryness, rounding out a generally smooth and slightly full feel, but it's not in that other range.

To be clear on placing it this would be one of the two best Thai green teas I've ever tried, along with that Tea Side version.


Fourth infusion:  the feel and flavor are both gaining a little depth; if anything it's improving.  The aspect range is still quite similar though.  Floral range is a good interpretation of a lot of the sweet character; I've not mentioned that yet, and it's transitioning to play more of a role, to stand out most.  The "green bean" stood out more for being atypical, but floral range is stronger, a more dominant aspect.  The way that a bit of astringency and vegetal range pairs with a warm, sweet floral tone it reminds me of dandelions.

In the past I would sometimes use longer or shorter infusions to try a tea in a different way, to highlight some of the aspect range both can emphasize.  I'll try a longer infusion to check on that next round, increased from around 15 seconds up to 30 instead. 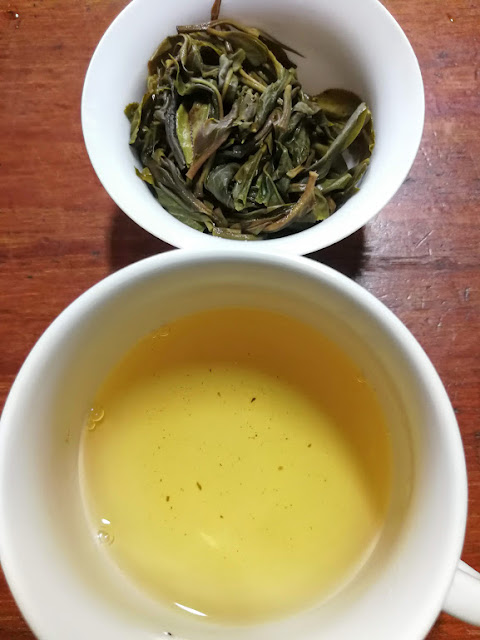 Fifth infusion:  that feel edge does ramp up a good bit; brewed for twice as long as this (for closer to a minute, at a high infusion proportion) this would be a bit harsh.  It's still pleasant like this; the feel still works well.  That feel is just as close to green tea as to sheng, or maybe slightly closer.

The sweetness, freshness, and pronounced cleanness make this tea work well.  Green tea can span a lot of range that doesn't work quite as well:  odd astringency, harshness, "straight grass," kale and other cooked vegetable range.  Again, this seems in between green tea and sheng range to me, just closer to green.

I'll leave off there; it's not transitioning much, so filling in how the next half-dozen infusions go won't add much.  It should be less positive towards the end, picking up other flavor range that doesn't work as well, or dropping out some of the positive intensity.


It's hard to place what it means when a sheng seems more like green tea.  I actually liked the tea; there's that.  I wouldn't expect it to age well, but then who knows, maybe after three years it would be even better, and after 15 just amazing.  Seems doubtful, but maybe.

On positive character alone this is quite pleasant.  It would be very difficult to buy a better Thai green tea than this; I've only ever tried that one version on this level.  Value is good; it's quite good tea for what I paid for it, or really just quite pleasant in general, and also an exceptional value.  Things seem to shift a little in relation to buying a cake of this (they also sell it compressed), since more or less drinking straight through that would seem advisable, versus waiting to see how it changes.

All of this is just one person's take; someone else might well try this and see it all very differently.  Others could enjoy it less if they don't care for this aspect range, and the judgment about type designation and aging potential might also vary.