I'm posting this mostly to include the references in the second part of the title, sharing some good, short instructional yoga videos my local studio made (Yog Aria), for the pandemic period practice, when they were closed.   All of Thailand was closed.

That pandemic is essentially over here in Thailand, but in other places people really should keep social contact limited.  Here we just had two new corona virus cases from two people visiting from overseas, potentially relating to unknown cases that have yet to turn up.  I suppose it's good that maintaining the isolation of the country is a major problem, with serious side-effects, but corona virus exposure risk really isn't, at this point.


In this post I mentioned how odd it was taking up a sport that I'm bad at.  I did a little stretching over the three month quarantine break here, mostly a modified version of the sun salutation cycle, but I'm right back to experiencing that gap in proficiency again, for the last three weekends in a row.  That rest time involved recovering from a knee injury, which is mostly better now but seemingly essentially permanent.

Kalani is helping by instructing me a little on the side, once based on a "yoga for kids" video and once on her own.  It's crazy how flexible she is, and how good her balance is.  She did classes in ballet and hip-hop dance, so it's no surprise.

I'm not the best person to have developed opinion on how practice and instruction varies, but I want to share my impression anyway.  I did yoga on my own as preparation for snowboarding a very long time ago.  That was really before yoga became as common as it now is, back in the early 90s (right, I'm getting old).  That's definitely not intended as any sort of baseline, because I had no idea what I was doing, using a basic guide to do a limited number of basic poses.  I would hold those for an indefinite time, until my body relaxed into that position.  The classes I now take involve a relatively opposite approach.

It's more like a work-out, a fast paced run-through of linked sequences of poses.  Kapil described that as a modern interpretation of traditional yoga, incorporating some degree of conditioning with other balance and flexibility aspects.  It works; I come out of those one hour sessions kind of beaten up.

I think my own current physical gap is flexibility related, not conditioning, but it works for both, forcing me to stretch in ways I barely can, or sometimes can't.  I suppose there could be more emphasis on the balance aspect in what I've experienced, but that's not really one of my own main concerns.  My balance is ok, strength and cardio conditioning are pretty good, but flexibility is horrible.  That's office work for you, the result of sitting at a desk for a dozen years, gradually changing my posture to resemble a question mark. 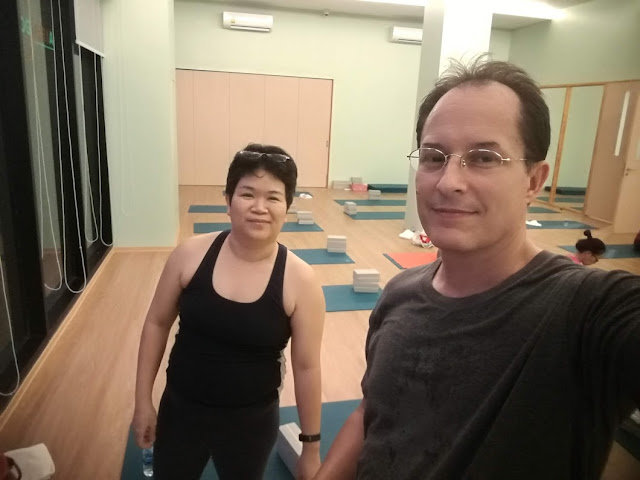 Related to my practice, it would go better if I put more time in between once-a-week Saturday or Sunday sessions, but my days are pretty full.  Sparing a second weekend hour is also problematic; lots of things come up with the kids, and it's appropriate to make those a priority.  Even tea reviewing keeps getting bumped.


Of course they do have different classes, with different levels of difficulty, emphasis on stretching versus work-out, or following traditional themes versus other developed scope.  The last class I did was "twisting;" that was rough.  At least I'm more comfortable being able to do some but not all of the positions now.  It's a stretch to say I've made much progress but at least the activity is more familiar, and I'm probably slightly more flexible.

It seems a little unfair that all those 100 pound Thai women have almost no muscle mass to stretch.  In thinking that context through muscle mass serves no purpose beyond aesthetics, until you want to pick up something heavy, or I guess to run, in the case of lower-body.

Others would know how all of this maps onto other forms of practice better.  To some extent I'm not really shopping around for the best fit or a certain style.  That studio is near our house, the expense is reasonable, and I like the instructor, Kapil.  He seems competent and genuine, and the practice seems fine to me.  It would be nice if I had a more normal picture of him, not doing a crazy pose with an inspirational saying, but I never snap any shots while there.


The subject of his title might come to mind; is he a yoga instructor (how I frame that, as a teacher), or instead a guru or master?  It relates to a divide in use of such terms related to tea, discussed in this post.  I can see why people might like those romantic images, and feel an attraction towards defining a role that extends beyond that of teacher.  I just don't.


Someone who doesn't do yoga might wonder, just how strange is the subculture, and how much does that aspect play a role?  I've attended a seminar session at a local health and wellness group that was more about that kind of thing, where it looked like you should get a tattoo and wear some Indian clothes to fit in, and should eat some turmeric afterwards.  No one seems to be a member of that sub-culture in this studio, just normal, upper-middle-class local people.  Mind you I have nothing against New Age inspired modern culture; I was into more of that myself awhile back, and Buddhism is a personal interest, along with tea.


Yoga is partly about keeping up with wearing trendy yoga clothes, but even that they don't overdo in this place.  I suppose it's because I live in an older, traditional part of Bangkok, near a moderate size university, in Dusit.

It could potentially be difficult to access for local foreigners, since Ari is the closest foreigner oriented neighborhood, but that's 15 minutes drive away, or longer if traffic is bad.  It's not so far from a river ferry pier, Thewet, but lots of people don't use those.  They should; it's by far the coolest way to get around the city, and it costs about 50 cents.  It's just that most of newer housing options are near sky-train and subway stations, and not the river.


I had intended to use these for more practice during the pandemic, but my knee needed rest, and I worked from home instead of taking a break from working, so I kept busy.  There are others linked to on their Facebook page, but these get the point across: