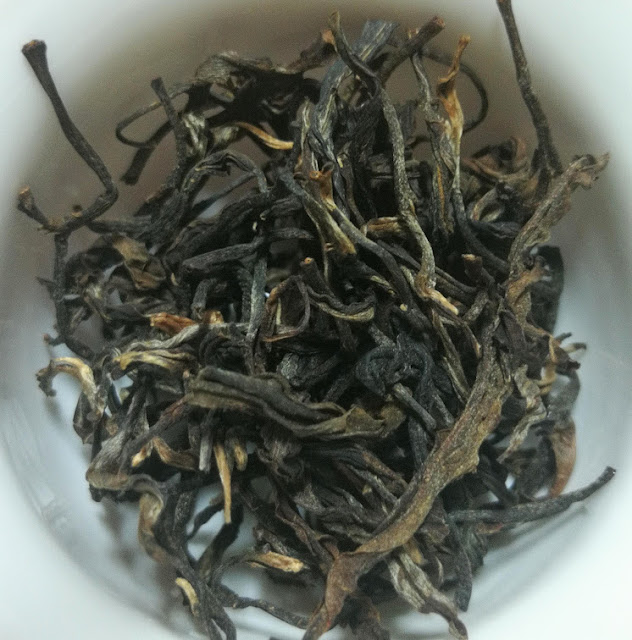 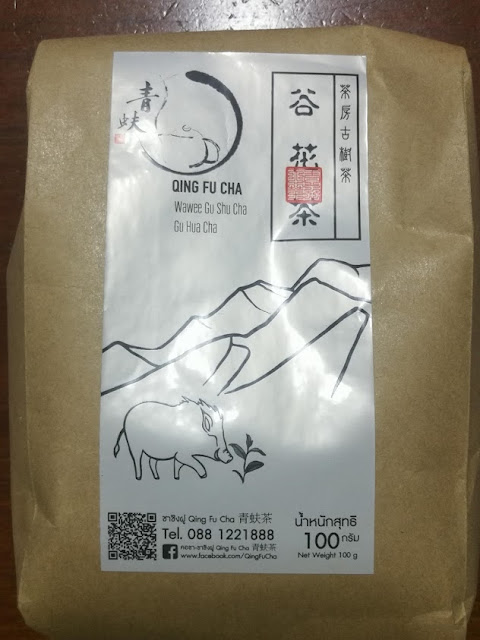 I reviewed a Thai sheng version from this source not long ago, and here move on to a type inspired by Oriental Beauty (Taiwanese bug-bitten, relatively more oxidized oolong).  This naming is a little odd, mixing two of the names for OB (Bai Hao and Dong Fang Mei Ren).  I'll look up a description of it somewhere in a final edit, but here I'm more concerned about how drinking it works out.

There is some contact information on the label photo shown, or they have a FB page, and a Shopee page (kind of a Thai version of Ebay, one of two, along with Lazada). 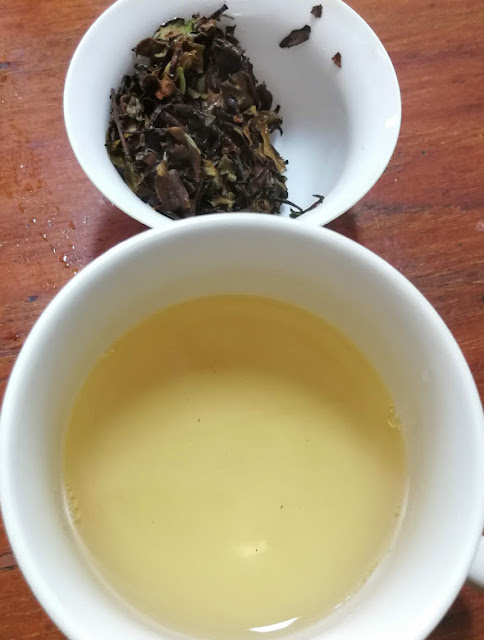 First infusion:  nice!  A bit light, as I always go on the first round, but sweet and creamy.  A cinnamon note stands out the most, and the rest does lean towards Oriental Beauty / Bai Hao / Dong Fang Mei Ren range, with a hint of grape / muscatel.  The tea could be thicker, and the experience lacks intensity and depth at this limited infusion strength, but the aspect range is nice.  I'll give the next round a solid 15 seconds or so and see how it fills in, and add more of a detailed flavor list. 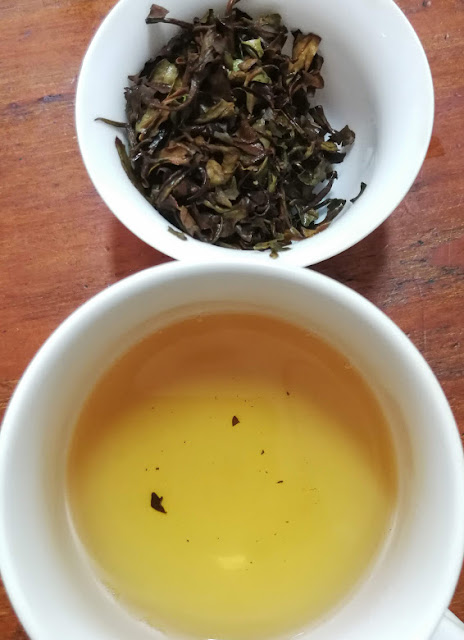 Second infusion:  it's interesting how flavor intensity does pick up a lot across a narrow range, and then feel stays quite thin, kind of a gap in the experience.  That hint of creaminess drops back instead of increasing.  On the positive side warmer spice tone increases, the cinnamon.  That's normal for OB ("real" OB; this isn't exactly that oolong type, an isn't really supposed to be).  Fruit is present supporting that but it's subdued.  Other aromatic woody range fills in, like a light version of autumn dry leaves, just a bit fresher in nature than that.  I could relate to someone interpreting all this as floral tone but to me the background range is more fruity, towards mango, or tangerine citrus.  It's not pronounced enough to stand forward as much as the warm spice range.

Sweetness is pretty good but it could be a little stronger.  Feel being on the thin side could be seen as a quite negative input, as a gap; it would depend on how much one values that input.  It stands out more for normal oolong range, across a lot of types, typically being a good bit thicker.  Aftertaste isn't missing but it's not really a positive input either, kind of moderate.  Some sweetness, that spice, and a hint of fruit trails over, but the experience is limited, and doesn't last long.

All in all I like the tea but the depth of the experience is limited.  You drink it and then it's gone, and part is missing from the time it is in your mouth.  To me it still works well as an interesting and basic tea, and a pleasant and novel version at that, but someone trying to judge for "objective tea quality" really could find it lacking.  I suppose it varies in relation to whether someone is looking for a particular experience, appreciating a full, balanced range of positive characteristics, or can appreciate whatever is positive in any given tea, without needing some basic aspect set to match up.  Flavor range is very nice.

This kind of tea version might work better for people who aren't experienced tea enthusiasts.  Or the kind of tea enthusiast who can still appreciate an Earl Grey once in awhile would probably love this, and the kind who can't relate as well to medium quality level Taiwanese Oriental Beauty, versus an even higher end, probably wouldn't care for it.  For having a "crocodile's tongue" it works for me. 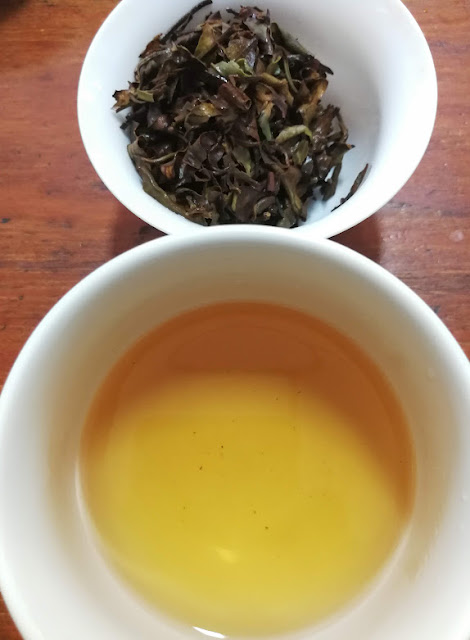 Third infusion:  a bit lighter; maybe I went just under 15 seconds this round, or maybe it is losing intensity already.  I will probably need to switch it to 20 seconds or longer to get the same infusion intensity out of this, and might be really stretching the times to get it to go a half dozen rounds.  It's made of really thin, broken leaves, so it's not surprising that it's fading fast.  I expect that I used a lot less leaf weight this time than normal for that density being so low.  A bit more would fit in the gaiwan but it's two-thirds full of wet leaves; it seems inclined to fluff up as both dry tea and also when wetted.

Typically that broken presentation would add astringency, across a broad range of tea types.  It didn't, in this case.  Something about this tea really reminds me of a white tea, as a version bruised and broken a bit but not put through normal rounds of oxidation as oolongs are.  Of course I don't know.  Maybe there is a hint more astringency in this round, lending it more structure, which is kind of positive, just not the full, creamy feel often present in oolongs in general and in Oriental Beauty versions.  Even though that astringency range present isn't necessarily positive--or negative; more neutral--I see the effect as a positive input for lending some complexity to a very simple, approachable character.

Flavor range is about the same, beyond that.  Cinnamon stands out the most, then some mild underlying fruit, along with light and warm earthy tones.  It might remind some of tree buds or some form of light bark versus fallen leaves; to the extent this is like autumn leaves it's a really dry, light version of those.  I would imagine that warm tones and feel structure will bump up for infusing this for over 20 seconds that next round.  It's the typical trade-off one encounters in brewing lighter intensity white teas; brewed light the pleasant flavors are a bit weaker but they "pop" better; brewed stronger you get more flavor intensity, and warmer tones, along with more feel structure, but the pleasant light flavors tend to come across as weaker in proportion.

Fourth infusion:  "pushing" this tea is the way to go, at least at this stage.  The warmer tones pick up, and a hint of dryness, with the increased astringency, but it gives the overall intensity a boost.  It would be nice if there was a way to pick up the flavor intensity without stretching out that astringency and shift to warmer range; I suppose really maxing out the proportion might work better.  For people who aren't accustomed to pushing down on a heap of expanding leaves in a full gaiwan this is brewed 3/4th full instead of 2/3rds; there's not that much room left.

At least there is nothing significantly negative about the tea, beyond the gaps (potential gaps; those kind of only exist in relation to expectations, but expecting it to have a fuller feel is kind of a typical broad expectation).  There was a faint hint of an odd scent in the dry leaf, a bit towards plastic (not new-car smell, not like a storage container, more like a cheap Chinese plastic toy).  That didn't really seem to translate to a main input, although I suppose if someone was really looking for it they might find it in the experienced brewed aspects set.

There's probably not much point in reviewing further infusions, since this is only changing in relation to brewing it out longer.  I could try one more round to confirm that but it'll probably just stretch a few more from here, or a half dozen, if someone doesn't mind drinking it thinner and thinner, with more and more of an astringency edge tied to stretching out the times. 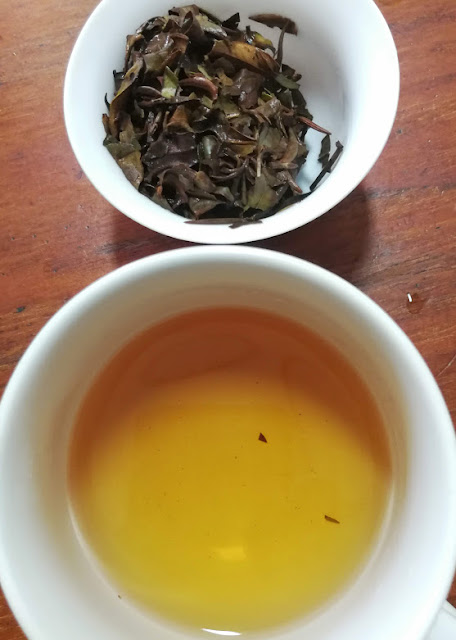 Fifth infusion:  sure, just more of the same.  The overall flavor intensity dropping back while astringency stays as heavy as it ever was--not heavy, just filling in some range of experience--isn't as positive as the early balance.  This is where a conventional Oriental Beauty version might be after 8 or 9 rounds, with those supporting much shorter brew times due to possessing a lot more natural intensity.  For total infusion time this has been through a longer than typical cycle for 5 rounds, in relation to my normal approach for a lot of tea types. 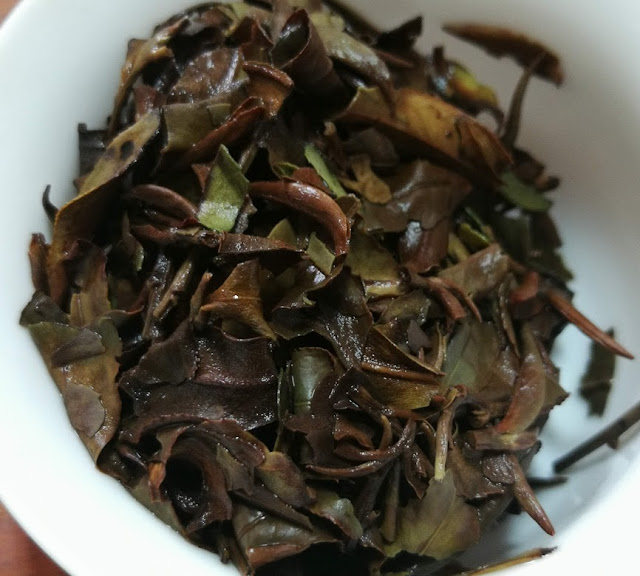 To me this is pleasant for what it is, it just has natural limitations.  The character that comes across is pleasant.  If you expect it to match up against an above average Oriental Beauty version then it's not nearly as good; some of the aspect range is mainly a gap in relation to those.  The next 5 or 6 rounds after this review scope worked out better than I expected, retaining a lot of that earlier positive character, even for intensity dropping off.

I drank it once since and it's an even better experience for really maxing out the proportion and not thinking about feel structure potentially being thicker, and the rest.  The flavor is nice.  It really doesn't fade fast; it's good for over a dozen nice infusions, prepared like that.  It would probably be fine prepared Western style too, or grandpa style, probably flexible in terms of getting pretty good results made in different ways.

From their Shopee page (automatically translated by Google):

Suitable for tea drinkers who prefer a light texture. but gives depth to the taste of tea.

*** It is tea from the top of Doi Mae Salong, Chiang Rai Province, which is 1,350 meters above sea level.

*** Picked from the young sprouts of the first half-pink tea From the young tea tree (軟枝), one of the favorite cultivars of oolong tea drinkers. and very popular

🌳🌳🌳 Bai Hao Mei Ren tea Grown in an organic tea plantation It is 100% natural without any chemical additives.

👌👌👌 Use hand massage (hand made), pay attention to every detail meticulously.

to control the quality of the aroma and flavor of the tea So the tea leaves come out in three colors: white, green and brown.

👌👌👌Massage and shake your hands for thirty minutes to get the distinct smell of honey 密香.

🌞🌞🌞 baking technique Use the slow dry method to fully bring out the floral scent.

Interesting to read, but it doesn't add a lot.  I would take that organic production claim with a grain of salt, given how that kind of thing goes in Thailand.  Maybe it is organic, or maybe not, and even a local version of certification wouldn't make that claim much more convincing.

Related to value this sells for 480 baht, or around $15 for 100 grams.  That seems pretty good, for what this tea is, quite pleasant and novel.  It seems normal for local vendors to either underprice their teas (tying them to local product pricing), or to really swing for the fences. This might be an example more in the middle, even though this pricing is high in comparison with standard Thai oolongs.

That sheng version was selling for 700 baht for 100 grams, more like $20, or equivalent to a $70 standard sized cake, which I guess is ok.  I've tried equivalent quality tea selling for less and also for more, but both of these are rare enough that there is no standard pricing.