I recently visited a family friend / counselor / astrologer Thai Buddhist monk and before I left he gave me some tea.  A bit unusual?  It really does never work out like that, so I'll explain. 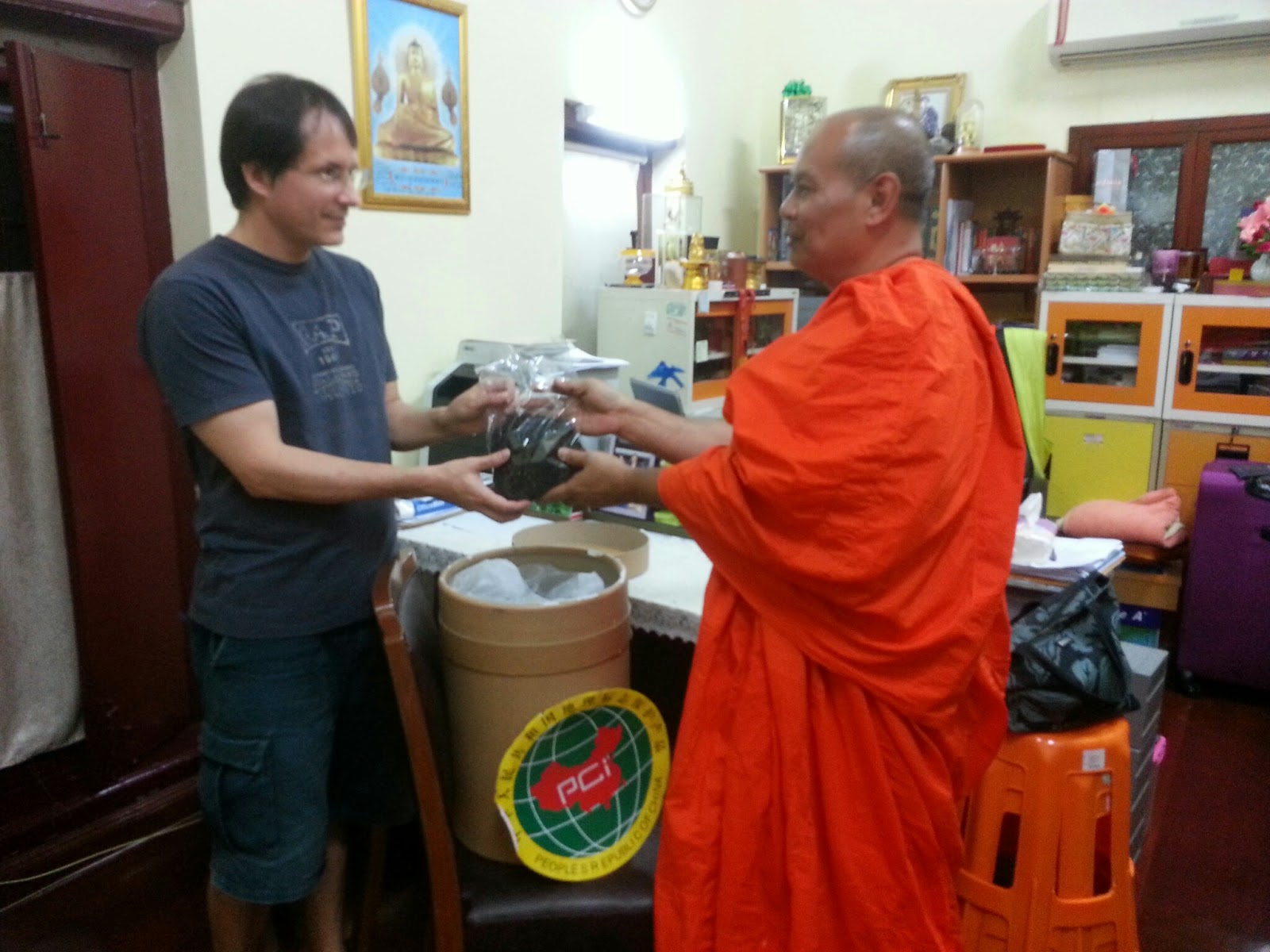 People give things to Thai Buddhist monks.  A monk can't own much at all:  two sets of robes and a pair of sandals, a few personal items like a toothbrush and razors (no need for hair styling, except for a monthly haircut, in that sect).  Some tend to need access to computers for their work, and there are usually some Buddha statues around--that's about it.  It gets a little odd related to "borderline" necessities like sunglasses and cell phones, but in general monks can and do use cell phones, and they typically wouldn't own sunglasses at all. 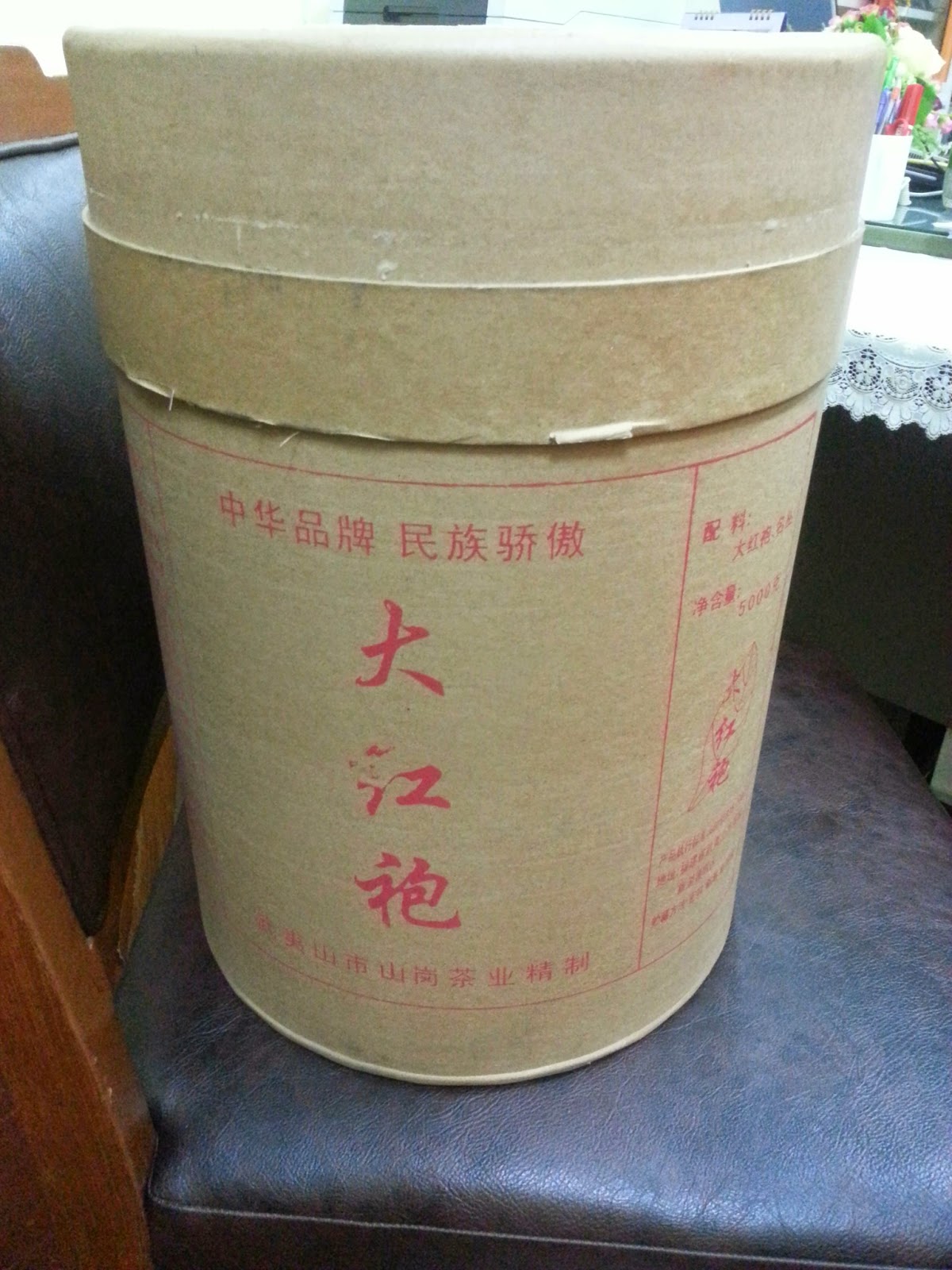 The main thing people would give a monk is food.  Every day starts with an early alms round at about 6 AM, and monks collect food offerings as the only food they'll eat that day, none of it to be consumed after noon (there are lots of odd rules like that).  The idea is to limit dependency on all material and physical concerns so they eat what's given, and don't eat at all after noon, so the excess goes to people working in the temple or to the poor.  It's not begging; people want to offer the food so they do.


People can give other things to monks.  Usually that would be limited to required items like soap, or paper towels, or "luxuries" like soy milk (they can drink that later in the day).  It's a nice, simple life.  If someone wanted they could also give a monk tea, which I do every time I go to the temple.  Someone gave this particular monk a good bit of tea; decent dahongpao at that.


You might wonder how this relates to the general theme of poverty, not owning anything of value and such.  The tea is of value, even if it is a consumable.  People can donate what they want to the monks, or to a temple, or a specific monk, which they can then distribute it from there.  It really couldn't be anything inappropriate for a monk to own (like jewelry, or a car, and cash is a touchy subject due to specific restrictions about that), but a good bit of tea would just distribute out from there, for other monks or even anyone else.

All this makes more sense related to one other concept:  merit.  If you give food or something of use to a monk you get merit from that act (good karma, essentially, with some specific ideas on how that works out).  If you receive and eat the extra food, or tea I guess, that also has the special (near-magical?) property of being a blessed item, so with extra value and benefit.

It was strange to me visiting a monastery in Hawaii (on the West side of Oahu) where the monks would take us on a nice walk and give us things from their grounds, edible leaves that Thais use in foods or fruit.  It seemed backwards.  But it was part of a larger cycle of the monks receiving support from the community and giving some back, and those items would be much more significant than store-bought foods to a Thai.  And about the tea, it was already good tea to start (with "good" always a bit relative).


I didn't initially know what the tea was but it reminded me of the different dahongpao I'd drank a number of times before (see several earlier posts).  It was definitely from China, and a dark oolong, so it had to be at least related.  Turns out it is dahongpao, per a Chinese friend's translation of the labeling. 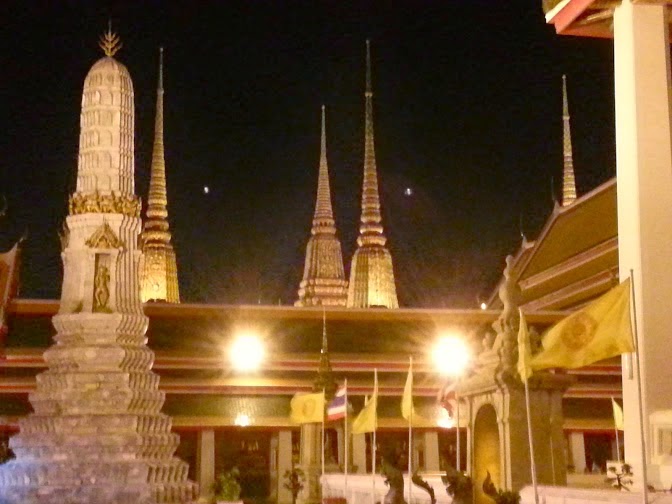 It was good tea, maybe not really high grade but a decent version of one of my favorite types.  It had the normal cocoa / cinnamon spice / mineral / earth front note, with an interesting woodiness, a light softness (zero astringency--the usual), and nice complexity of other subtle flavor tones.

Or I suppose someone else might insist those minerals were really standing closer to the front.  Complexity can be like that.  Per usual the taste changed after a couple infusions, with cocoa and cinnamon spice dropping out and the wood elements picking up, then a third infusion was about it.


It reminds me of people claiming similar style oolongs can taste like rocks.  Maybe...  I'm not sure that's what the category term "rock oolong" is really supposed to mean, so I could read up as a reminder.  The way those predominant flavors mix together it's hard to identify just one, and there is an earthiness and / or mineral element that stands out, it's just hard to pin down the flavor.  Maybe a rock does taste like that, much as one could taste a rock.  It wouldn't be limestone, granite, flint, or sandstone; maybe it tastes like a rocky meteor would taste.  There is also an earthy component that blends in with it, also hard to explain, somewhere between a light hardwood, cardboard, and moss.

As always funny I mean by all this that the tea tastes good.  I imagine a higher grade version would come across a little differently in terms of flavor elements, a bit "cleaner," but this is decent tea.  As luck would have it I just got some new teas from China today (Fujian Province, Wuyishan City; if you don't know what that means it's "!!!"), so I'll get back to all that.

For someone who loves that flavor profile any limitation in comparing quality level to another tea was hardly a limitation.  I could live on it.  If someone else loved grassy or vegetal green teas or full textured pu'ers, or whatever else, maybe it wouldn't seem quite as nice.  The normal criticisms are that such teas taste like rocks (maybe...), or they are thin-bodied.  As my wine guru has pointed out taste preference is a subjective thing, or related preference for elements other than taste instead, so to each their own.


Did it work to magically transform my sense of calm?  Not in the first couple days, but maybe it will if I keep drinking it to let the effect sink in.  Too bad my wife doesn't drink tea.

Can you go to a Thai temple and pick up some nice tea?  Of course not.  But look me up before you get to Bangkok and maybe I'll bring some and set up a tasting at the monastery for us.


Of course you really don't need tea to feel a calming, relaxed, magical vibe in such places; it's already in the air.