This is the second review of a tea provided by Golden Tips tea, with their information on it here.

Does it get old for me to say it was nice tea? 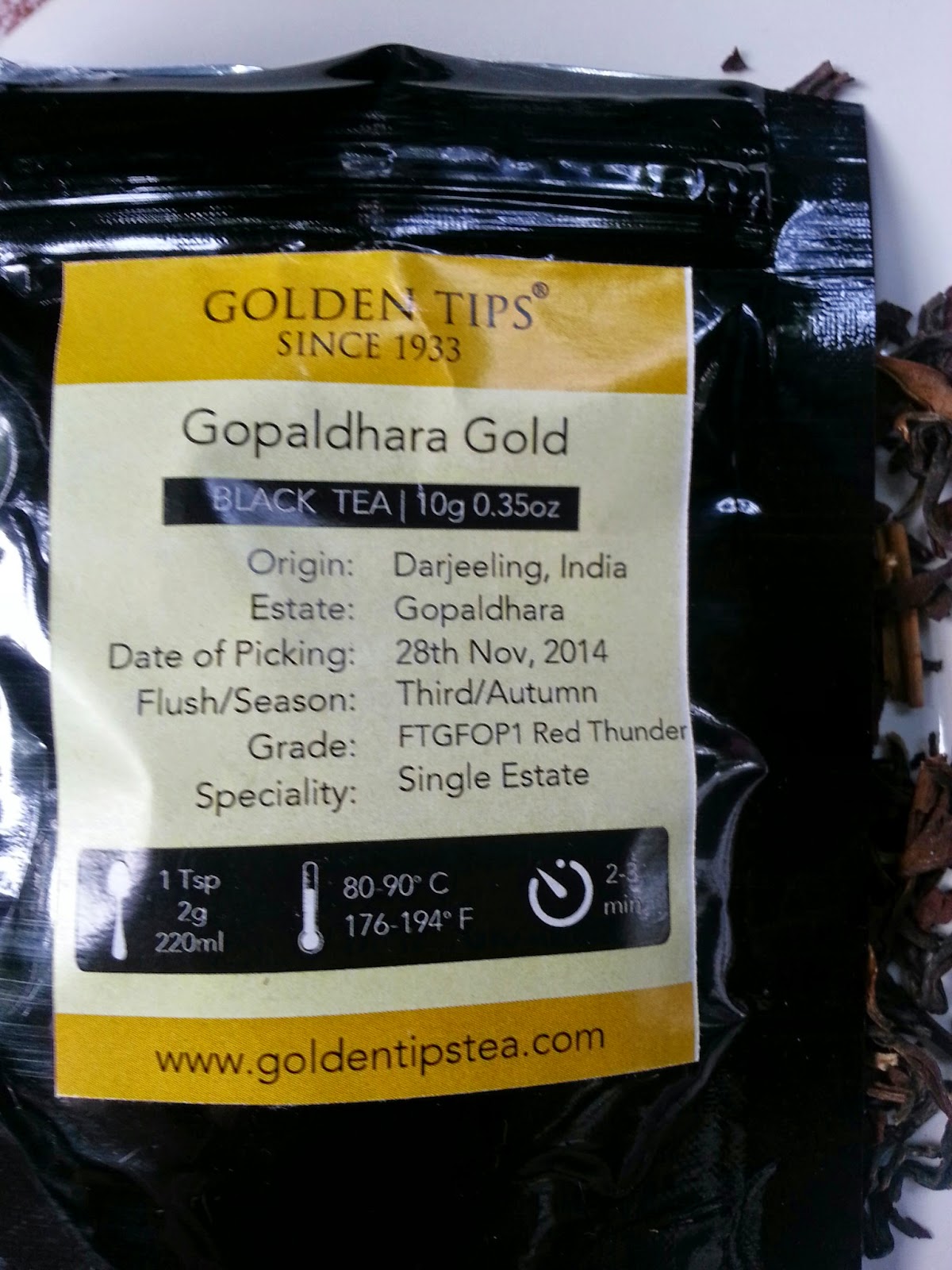 How does this relate to conventional / other black teas?  Oxidation level seems less.  It has been oxidized so calling it a black tea seems right but apparently not to the degree that brings out the charred flavors.  Come to think of it this doesn't seem any more oxidized than the yancha oolongs I've been reviewing, but it's hard to compare due to type difference.


Character is clearly darjeeling,  which is different,  heavy on fruit, perhaps more subdued than some others, but without the astringency that can be a component.

Second infusion was exactly the same, no changes or diminishing.


After tasting and making notes I had the rest of the tea with french toast,  my breakfast.  A more neutral food might be a more intuitive match, some type of muffin, but it worked well.


It could sound like I'm accusing the tea of being an everday tea (implied that the grade is low), but I don't mean that,  the tea is worthy of drinking alone, it's just more commentary, somehow it works for me as a breakfast tea, and I think it would match well with a range of food.  Then again every single type of tea is nice for breakfast to me, if I feel like having it just then.


While I'm digressing--sorry about that--I also had some tamarind with breakfast, and it occurred to me the flavor profile was a bit similar:  comparable to raisin (or maybe fig), earthy, sweet, complex, fruit flavor even hinting towards citrus.


Did the tea also taste like tamarind?  Maybe, sort of, but not really.  It reminds me of how tea descriptions really are more limited in scope and biased than they might seem (as discussed in this flavor wheel post).


A bit unconventional for blogs, but I've also been experimenting with discussing against the vendor's description of their own tea lately (again, it's here):

A delicate yet rounded black tea with intricate flowery notes. The tea brings about a subtle and sweet profile with hints of fine muscatel and an slightly earthy roundness. The lingering aftertaste brings in sensations of dark bold chocolate and cocoa... definitely among our better autumn Darjeeling's.


I'd agree, although I could've missed something on the aftertaste review.

To be honest even though they essentially say it's a very nice tea--and I agree with that--I didn't feel as though my review or this description really captures why.  It has good flavors, good balance, a nice feel, very little astringency to worry about adjusting brewing for--but all this just says it's a nice example of the type.  It's not satisfying.

Maybe a little review of what that type should be might help.  I suspect it really won't, though, that one would need to delve more deeply into really knowing Darjeeling and then even if that didn't lead to giving voice to what is special about certain teas at least the intuitive reaction would seem more grounded.  Given that won't fit in a blog this is a good chance to scan through a bit more research about Darjeeling flushes.

To begin, this is a nice vendor-nuetral description of seasons / flushes, describing the timing of each and general character:

Darjeeling First Flush Tea - The colour of tea is light and clear with bright liquor. The leaves have floral scent, with a lively character.

Darjeeling Second Flush Tea - The tea has dark colour and strong flavour in contrast to first flush teas. The tea leaves have purplish bloom and has a fruity taste generally...  tea has amber hue and taste is mostly muscatel grape flavour

Darjeeling Third Flush Tea - The tea colour is dark or coppery and texture is full bodied but it has a lighter flavour. Autumn Darjeeling has a delicate as well as a sparkling character.

Another general reference by Lochan tea goes into more detail, but the part about general character of the autumn flush is still a bit limited (the part about the actual taste of the tea):

..steeps up a full-bodied and naturally fruity flavored tea ... a nice round taste, quite suitable as a breakfast tea and stronger than the Second Flush.

Yet another reference again describes the flushes more in terms of how each compares to the first and second,:

Finally comes the Autumn Flush, from early October through early December. The taste is closer to the Second Flush, with a more floral aroma and a full body.

One might read these different sources as saying the first and second flushes are prized most for two somewhat different characters (brightness of the first and distinct fruit flavors of the second), and the autumn season tea can have a nice smoothness, full body, and pleasant fruit character.

I guess that works.  It's still a bit non-specific related to the actual experience of Darjeeling teas, which is unique among other types of tea.  I suppose the words really don't do any of the other teas justice either, compared to drinking them.

Did the review I did at the beginning of the month of a Thurbo Moonlight Second Flush Darjeeling fit this profile?  Yes!  I mentioned "the taste seemed typical enough of the type to me:  a grape-iness (muscatel), hinting toward citrus tones, natural sweetness, earthy elements to give complexity, great freshness and body."  Given that I'm intrigued by these season differences I'll still get back to all that later, soon enough.

Someone I respect a great deal in the tea industry once mentioned that making iced teas from Darjeeling might work out.  I was a bit thrown off.  Of course you could, but really, would you.  It seemed disrespectful to the tea.

Making another Darjeeling not so long ago I ran out of time and put the last infusion in the refrigerator, to drink later.  It was amazing, one of the best iced teas I've ever had.  Of course I don't drink iced tea, maybe except at a local Japanese restaurant, but that's not the same thing.  All this has triggered a little extra work for me in the morning in making one extra infusion of tea, especially when brewing a lightly oxidized oolong, teas that just never quit.

For me normal brewing process would be fine for this; "Western" style, a few infusions, depending on the tea (so breakfast can run long, but after awhile the timing becomes natural).  But I recently read an interesting alternative brewing method for Darjeeling iced tea in a LinkedIn discussion I'll share, with attribute included (mind you I've not tried this, and probably never will; I like hot tea better).

I would not recommend using this reviewed tea for this (still disrespectful to that particular tea), but there are plenty of mid-range level Darjeeling teas it would work well with.  I would expect astringency wouldn't typically be an issue using cold brewing, especially when adding sugar.

I have been cold brewing Darjeeling black, oolongs and green teas separately since the last 12 years.  Formula: