I tried the black tea I bought in Japan recently.  I wish I could say it was an interesting and positive presentation of a black tea style, but I didn't like it.

Usually it's not so simple; teas have a complex character, and some aspects are positive, others negative, and it's more about appreciating aspects and then noting how it matches overall preferences.  This tea had a strange flavor element that I didn't care for.


That taste element reminded me of gaba teas I've tried in the past:  nitrogen-environment processed teas, designed to result in production of a brain function regulating component compound (with the shortened name "gaba").  Maybe such a tea calms you, or possibly it doesn't, with more on the flavor and effectiveness in my earlier research and review post.  You might wonder, why would exposure to nitrogen affect a tea, because it's the main component in air anyway?  Good question.  My understanding, as conveyed by a tea guru, is that the lack of nitrogen forces reactions that would normally be based on oxygen to occur with nitrogen instead, so the tea would be less "oxidized," even though something similar but different would still happen.

But onto a review of this tea. 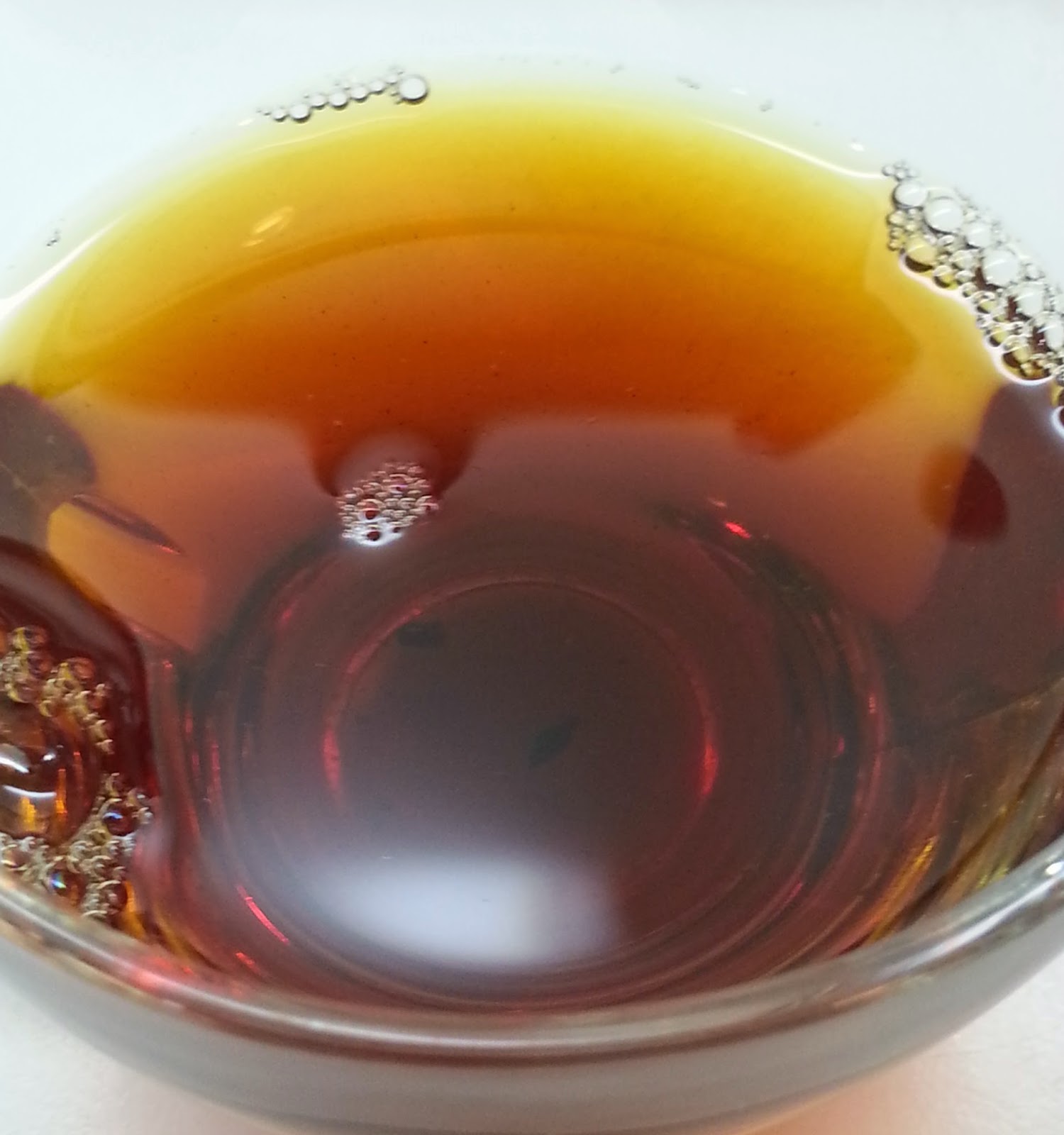 A general maltiness came across first, and a fraction of a second later that taste element that I'd spoken of.  It's hard to describe; a bit like cardboard or chalk, a mustiness, maybe leaning a little towards wet dirty sock.  In some gaba teas a similar taste tied to a dry feel to the teas, and maybe a little here, but less so.

It was hard to get past that flavor element to evaluate the rest of the tea character.  It didn't have a lot of astringency, and was a little malty, a bit earthy, and if somehow that one taste could be removed it might have balanced into a nice tea.  With it--I'm not sure what I'll do with the tea.  More guesses on what it tasted like:  cork, but not a fresh and light cork similar to balsawood, which would be nicer, or a little like that smell of old books in a library.  I love that smell but wouldn't love it as a flavor in tea.


I almost have to compare the tea to a black tea I just bought in Korea and recently posted about, although the two teas are quite different.  That one lacked an objectionable flavor component, and so seemed superior.  Attributes that weren't as positive as in my favorite teas stood out in the Korean tea, so it was interesting but wouldn't be a favorite.  In both cases I couldn't help but think drinking green teas instead might make more sense, reminded of the expression "when in Rome do as the Romans do."

But I'd been through the opposite experience in Vietnam half a year ago.  I tried a lot of consistently good, distinctive green teas--what they typically drink--and also tried two very nice black teas, and one very good darker oolong, and one nice lighter oolong.  These were interesting not just because they were good but also because they were different than others I'd tried before, as with lots of types of teas I tried from lots of different places.


I could say more about the tea based on reading up on it on a vendor website (the package referenced one:  http://www.mikuniyazengoro.com/).  But that site is only in Japanese.  They also have a Facebook page (page linked here) but it's also only in Japanese, or at least mostly Japanese, since there at least some section heading titles are in English.


Ordinarily if I really didn't like a tea it would be as well to just not write about that particular tea (if you can't say anything nice...), especially given I'm not completely sure what I've bought.  In some other cases I've passed label photos onto foreign friends for translation, but didn't this time, so I've no idea what that site would've told me about that tea, or related product options.


In this case I'm posting all this because it's part of a larger search for teas I've already been discussing, and even a relatively negative result is part of that process.  I'm completely sure this one tea doesn't indicate anything general about the rest of that vendor's teas, and I wouldn't be surprised if there are considerations I'm not taking into account, like it's not really supposed to be equivalent in style to many other black teas I've tried.


Somehow it softened the blow that this tea wasn't sold as a premium tea, that the cost was at least in the normal range (around $10 for 60 grams, versus around $30 for 40 grams for the Korean black tea--not normal, for me).  It wasn't just the expense at stake; it seemed to make a difference how the tea was represented, as much as packaging type and foreign language text did such a thing.  Staff in both tea shops could barely speak English, so hardly offered any input or opinion on the teas.  In Korea the shop had been selling one significantly more expensive black tea--the one that I bought--and one relatively inexpensive one (at a more typical pricing level, likely roughly similar to this tea), so if I'd hated that tea, or if it seemed flawed, it would seem a different thing.

Of course my wife is concerned with how much money I waste on teas, but no need to get into that (it's not much; nothing like a Starbucks habit or bar spending). 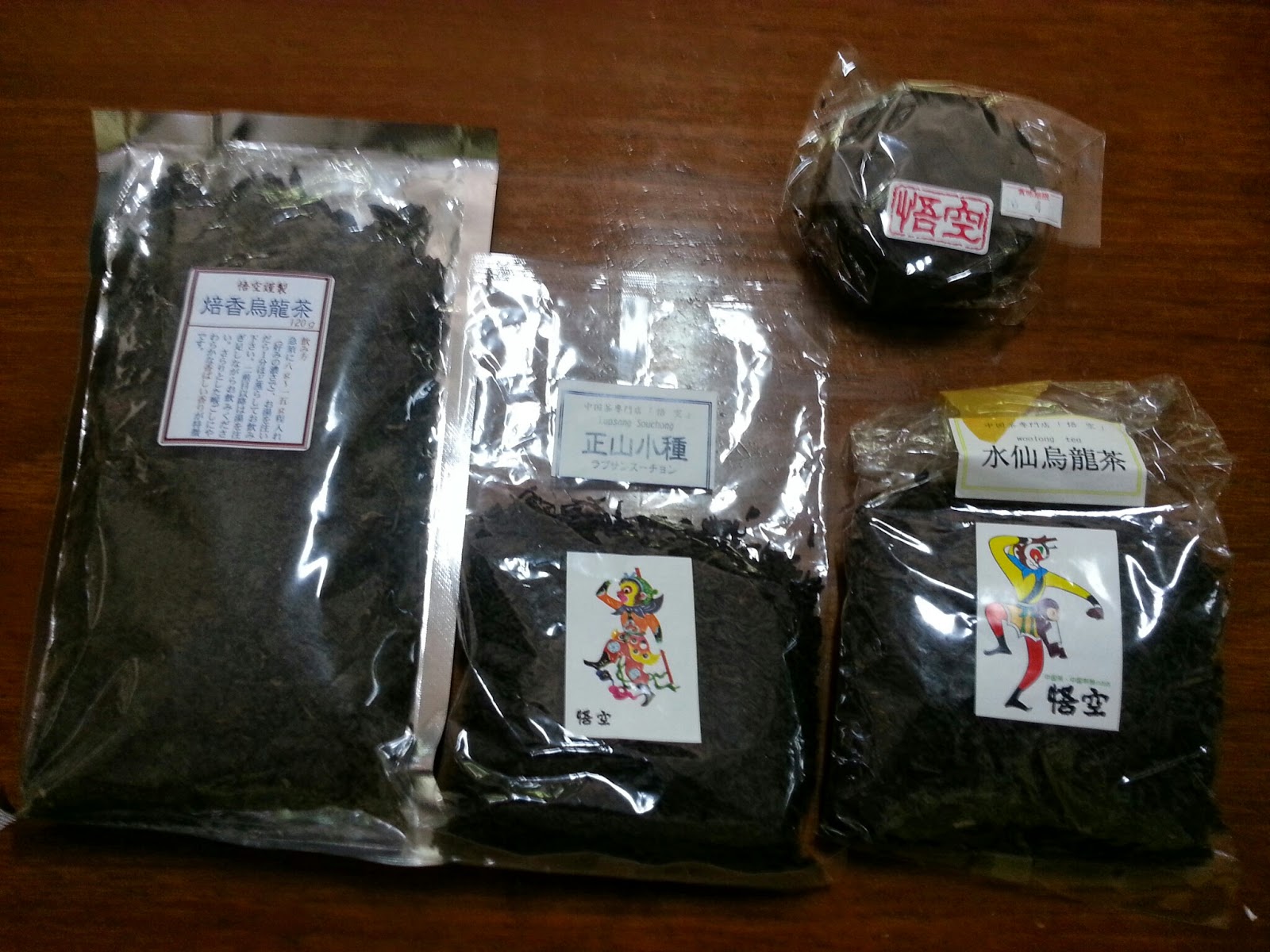 To compare further and provide some context, I bought two lower range Chinese teas in a tea shop in Chinatown in Yokohama.  I was there to find Japanese teas, and only there realized they'd probably not sell much in the way of Japanese teas (after they said they didn't), because it was Chinatown.


I've tried two of the four teas, one sold as Wuyi Yancha (more oxidized oolong), the other as shou or cooked pu'er (or at least as compressed tea; labeling wasn't in English, so likely not from the right region for pu'er).  I didn't keep close track of cost for these but it was low; around $20 for a two or three hundred grams of tea.  Both teas I tried didn't seem to be high quality level teas but I liked both more than the two black teas I'm discussing here, in part related to preferring those general types, and also because they were decent teas.  I won't mind drinking them, and wouldn't have reservations about sharing it.


It was interesting they were calling black tea "red" in that shop in Chinatown, and referring to compressed teas as black.  This seemed to come from Chinese terminology, of course, and also helped explain why I might have never found a Japanese black tea without using a different Japanese name (wakoucha).

It's not possible to judge a general tea type by one tea product, so I really can't say much about either Japanese or Korean black teas in general.  As luck had it the two Vietnamese black teas I tried were both quite good, so evidence mounts that there is a generality there, but surely I could have tried two much worse teas based on having less luck.

A comment made on a Japanese black tea blog post (here) referenced another more experienced tea blogger having tried several such teas, and this is how more informed perspectives are developed, over time, based on more sampling.  Of course sourcing is also relevant.  If I'd instead tried a tea a vendor had provided based on trying many such teas and selecting a favorite that would seem a better representative than allowing random chance to lead to only one.

A very limited selection process applied to the Korean black tea; the shop presented two options and identified one as better, potentially based on cost more than the product qualities, although often the two go together.  There also seems a chance that just because the tea was sold as such and was expensive that it still wasn't a great representative of the general type.


It can be misleading to judge by appearance but that Korean tea did include a good bit of stem and the leaves weren't whole, so it seemed at least possible it could have been sorted as that tea product and also as a higher grade.  But who knows.


The Japanese black tea consisted of shredded leaves, typical of machine-processed tea (but again who knows; an informed tea expert might extrapolate from the final-product evidence more effectively).  I tried a machine-processed Cambodian black tea once that didn't look like much but was nice (that I wrote about here), which was nearly given away for free compared to all of these teas.


In conclusion, you really can't conclude much from trying one tea, but I didn't like this one.